As the international market’s demand for organic food is increasing, the health benefits and risks of organic product have raised many much controversy. Today, mainstream literature believe organic foods, especially fruits and vegetables contain higher levels of vitamin C while lower levels of pesticides and nitrates. However, some current reports show that actually there are no different between organic and conventional food. Therefore, in order to reach a more definite conclusion, a rigorous and fair comparison is necessary.

Recent researches have clearly shown that organic produce has lower level of pesticides and nitrates. According to statistics, the nitrate that intake by human will converted into nitrite, while nitrite is a strong carcinogen and can cause methemoglobinemia. Therefore, in recent years, with a lot of nitrogen fertilizer, vegetables, nitrate pollution has attracted attention.

Moreover, Organic organic farming methods can potentially lead to microbiological contamination, according to Centers for Disease Control data show that unprocessed fresh organic food may have a higher incidence of foodborne pathogens. But the literature has shown that organic produce does not carry any higher risk of significant microbiological contamination than conventional produce.

These findings in the current literature suggest that there are no evidence to prove that organic produce are definitely better than conventional food. Therefore, in this review, the organic and conventional products will be compared in terms of nutritional value, pesticide level, and microbiological safety, to find out a more definitive conclusion.

Organic food is food that has been produced without the use of synthetic pesticides, synthetic fertilizers or sewage sludge, bioengineering, or ionizing radiation (USDA, 2002a). In the recent 10 years, organic food can be found in supermarkets easily. Most reason for people to buy organic products is that they believe organic food contains more nutrients and it brings advantages to the health. However, the USDA state that “makes no claims that organically produced food is safer or more nutritious than conventionally produced food” (USDA, 2002a).

Therefore, where organic products is better than conventional products is still a question. In this dissertation, I am going to analyze the existing experiment data from different organization and compare the nutrition value of organic and conventional food in 3 aspects, which is nutritional element, pesticides level and microbiological safety.

Recent year, the comparison of organic food and conventional food has become a hot topic, people tends to eat organic products , which is due to excessive abuse of pesticides chemical and fertilizers, the toxin will acuminate in edible plants and animals in the conventional farming method. Moreover, organic farming associated to establish or restore biodiversity and ecosystem cycle by reducing dependence on external substances, so as to maintain the sustainable development of agriculture.. Therefore the idea of having organic food begin at 1950s in Europe and the United States. Until 1990s, it becomes a trend and spread to Asia such as Taiwan, Hong Kong.

The sales of organic food keep increasing in the recent 10 years. It started at 11 billion US dollars in 2004 and with a constant grow, in 2013, the sale has boosted to 29 billion dollars. The sales keep increasing although the annual growth slowdown since 2008.

Several reviews have been published that have attempted to definitively compare the nutritional quality between organic and conventional crops. However, each one has reached a similar conclusion that definitive conclusions cannot be drawn due to the lack in quantity and quality of comparable data. Nevertheless, some generalized trends have been observed.(see 2.2)

Five nutritional elements were being compared in the experiment that I have quote. They are the antioxidants, precursors of key vitamins, minerals, nitrates and total protein content.

Quercetin is an antiviral, anti-inflammatory agent, it is also a potential eczema and cancer healing agent.

TAC contribute to the ability to against oxidation since it interrupt the chain reaction of free radical.

The remaining 4 nutrition compared are

“The review of Nutritional Superiority of Organic Foods” (by Charles Benbrook,Xin Zhao, Jaime Yáñez, Neal Davies and Preston Andrews, organic center 2008), this study has identified all peer-reviewed studies published in the scientific literature appearing since 1980 comparing the nutrient levels in organic and conventional foods, to minimize the experiment error caused by environmental factors, the match pair that used in the study was planted in both the organic and conventional fields, also, the composition of soil types and topography chosen was highly close.

The result is that for antioxidant, organic food contains more than conventional food, and when comes to others nutrient, the difference narrowed. For nitrites and protein, the content of “CF” is obviously more than “OF”. 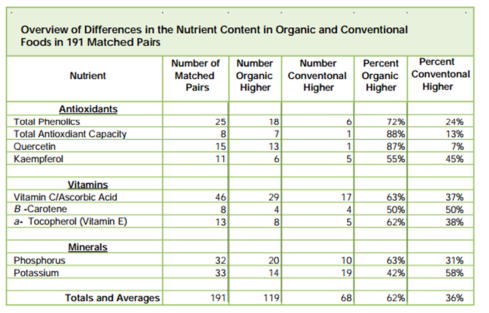 “Nutritional quality of organic foods” (by ASN in 2009) reviews 162 studies was chose from 52,471 articles for 50 years. It concluded that there is no significant difference in nutrient content between “OF” and “CF”, excluded nitrogen, phosphorus and the titratable acidity. 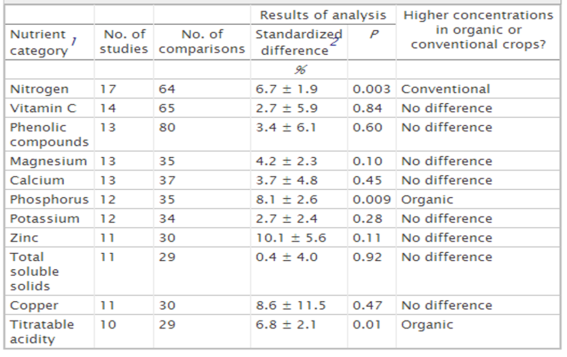 Pesticides are substances meant for preventing, destroying or mitigating any pest. Pesticides can cause acute and chronic health effects in people who are exposed. it is no doubt that pesticide exposure will cause a variety of adverse negative health effects. For acute effects, it may cause skin and eye irritation, destroying of nervous system; for long-termed effects, it mimicking hormones causing reproductive problems, inducing cancer, birth defects, fetal death, and neurodevelopmental disorder.

3.2 Pesticides in organic and conventional food

Organic crops are believed to be healthier, one important reason is that synthetic pesticide is not used in organic farming process, while in contrast, which is widely and commonly involved in conventional farming methods. Therefore it is generally believed that organic crops should contain less pesticides than conventional one. Several literatures have published to prove whether this preliminary hypothesis was correct, and if it was, what are the exactly different of quantity between organic crops and conventional crops.

A review in 2003 entitled “ Pesticide Exposure of Urban and Suburban Preschool Children with Organic and Conventional Diets” (by Cynthia L. Curl, Richard A. Fenske, Kai Elgethun) concluded an experiment that measure the DAP content, which is a kind of commonly used pesticide, in the urine of 18 and 21 children with organic and conventional diet respectively.

This experiment shows that the urine of children having conventional diet contain higher concentration of pesticide residue than the organic one, and the ratio of dimethyl (pesticide) of “OF” and “CF” is 1:8.5 on average.

In this experiment, we can observe that “OF” is not completely free of synthetic pesticides, although it is in lower level. It can be explained by the improper method of organic farming, mislabeling or more likely it is due to environmental contamination. For example, DDT, which is a pesticide that persist in soil and difficult to decompose, the DDT residue will contaminate both organic and conventional crops. Therefore, pesticide contamination is unavoidable in crops.

According to the USDA organic standards instituted in 2002, organic crops can be fertilized with natural sources of nutrients such as animal manure, plant debris, fish emulsion, and kelp. Since foodborne pathogens such as Escherichia coli O157:H7 may reside in the gastrointestinal tracts of animals and thus remain into the manure, it has been suggested that organic crops may contain higher levels of pathogenic bacteria than conventional crops.

E. coli O157:H7 is a kind of E.coli that can cause sickness to human, such as diarrhea and kidney damage. therefore, the National Center for Infectious Diseases, Centers for Disease Control (CDC), particularly warns of the dangers posed by E. coli O157:H7. The source of E. coli O157:H7 can be caused by exposure to contaminated water, improper use of organic fertilizer and improper handling at the plant in transport.

Based on this experiment, it shows that there is no correlation between samples of unsatisfactory quality and organic farming.

Another experiment done by Department of Food Science and Nutrition, University of Minnesota, set up a control experiment which compare the E.coli prevalence in sample from certified and noncertified organic farm.