All species of mold are of the eukaryotic kingdom Fungi, of which are commonly used in the production of food, such as cheese, or brewing, or are described as pests that are harmful towards humans, and aesthetically unappealing. With up to 120 000 identified species and an estimate of 1.5 million different species, rendering the Fungi kingdom as the least-explored (Webster & Weber, 2007). Fungi have been distributed into four taxonomic divisions; Zygomycota, Ascomycota, Basidiomycota and Chytridiomycota.

This kingdom is beneficial ecologically as Fungi play an important role as decomposers, and recyclers of nutrients in an ecosystem. Fungi are heterotrophic, and some species are also saprotrophic, using secreted digestive enzymes on substrate to breakdown (Farabee, 2010). This results in a more soluble form of the substrate, which can be efficiently absorbed by the Fungi. The nutrients are absorbed through their hyphae, which are small in volume but large in surface area, increasing absorption efficiency. The excess sugar absorbed is stored as a polysaccharide glycogen, similar to other animals and humans (Farabee, 2010).

Fungi come in forms of, uninucleate unicellular, multinucleate and multicellular, varying in different species and families. Therefore, fungi species are “classified on the basis of their reproductive spores and the nature of their multinucleate or multicellular filament known as hyphae” (Farabee, 2010). The characteristic structural growth of the hyphae are also use to classify fungi species, which when are in interwoven networks makeup mycelium. The Hyphae is uniform in each taxonomic group of fungi. Although the presence or absence of septa is a feature of distinction.

The fungi Mucor hiemalis of the taxonomic Zygomycota division will be the focus of this report. The phylum zygomycota contains less than 1000 species of fungi, of which the hyphae are long, multinucleate, with haploid nuclei (Farabee, 2010).

The Phylum Zygomycota express aseptate hyphae, in which the nuclei lie in a common mass of cytoplasm, described as coenocytic (Webster & Weber, 2007). With cell walls of the hyphae containing the carbohydrate chitin, and the derivative chitosan, which is also found in the exoskeletons of the organisms in the arthropoda Phylum.

That are 50 species of the cosmopolitan genus Mucor, with many of the species being widespread in soil or on substrates in contact with soil. Most of the species are meophillic, and are able to grow rapidly on agar at room temperature

Mucor species are able to reproduce both sexually and asexually, with asexual reproduction as the most common method of reproduction, which results in the production of aplanospores (Reddy, 1996). Some species are homothallic where zygospores are formed in cultures derived from a single sporangiospore. Whereas, the majority of the species within the Mucorales order are heterothallic and only reproduce when compatible strains are mated together (Webster & Weber, 2007). Although there is no absolute distinction between homothallic and heterothallic conditions, as some species are ambivalent. (Webster & Weber, 2007) 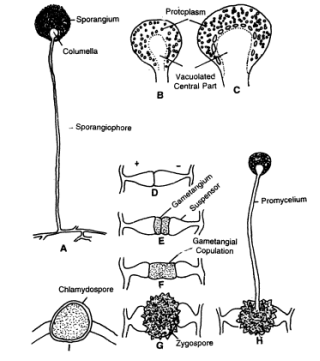 Asexual reproduction begins with the formation of sporangiophores at the basal vegetative hyphae when there is abundant food and moisture. The cytoplasmic mass and nuclei moves through the terminal of the sporangiophore, which then begin to swell. Subsequently the sporangiopore has developed into a sporangium, a globose structure (Reddy, 1996). When the sporangium is mature, two distinct parts of the sporangial content forms. A thick layer of cytoplasm, which contains numerous nuclei and a basal central vacuolated portion. The other region is separated from the thick layer of cytoplasm by a dome-shaped septum. The central globose structure is referred to as the columella, of which the outside is cleavage into many 2-10 nucleated parts (Reddy, 1996). The nucleated parts then develop cell walls, which transforms them into distinct sporangiospores. The spores within the sporangium begin to mature, and the colour changes from yellow or yellow-brown to a dark colour. Once mature, the sporangial wall becomes hard, brittle and ruptures, liberating the sporangiospores. The dispersal of the sporangiospores is dependent on air flow, and/or insects (Reddy, 1996). When the spores are transport onto substratum of favourable conditions, abundance of food and moisture, they will begin to germinate, developing hyphae, which will eventually form mycelium.

Sexual reproduction occurs through the copulation of two multinucleate gametangia that are similar in structure. Therefore, they are referred to as isogametangia, and the consequential sexual fusion is known as isogametangia copulation. Although a phenomenon was discovered, where two different strains of fungi species was require to initiate sexual reproduction, which are given the labels positive (+) and negative (-) (Reddy, 1996). When positive (+) and negative (-) strains of the heterothallic fungi were in close proximity of each other on the same substratum, sexual reproduction processes can occur. Such as when compatible strains would release trisporic acid, which diffuse through cell membranes and initiates sexual reproduction. The fungi then produce short, swollen lateral branches called progamentangia (Reddy, 1996). The terminals of the progamentangia would enlarge and a transverse wall divides the enlarged terminal parts, into a distal gametangium and a basal suspenser cell. Numerous haploid nuclei are contained within the gametangia, called the coenogametangium. The positive and negative gametangia come into contact and will subsequently fuse together due to the dissolution of the cell wall (Reddy, 1996). This results in the fusion of haploid nuclei into a diploid structure, known as the zygospore. Below the original gametangia wall, the zygospore will secrete two new cell walls, which subsequently ruptures the gametangial wall. During unfavourable conditions the zygospore can remain dormant, and will only germinate when favourable conditions arise. During germination the outer wall of the zygospore cracks open and vertical hyphae called promycelium will sprout from the inner cell wall, which produces a globose sporangium at the apex (Reddy, 1996). 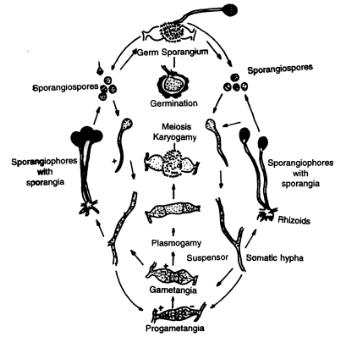 Maintaining intracellular pH of an organism is crucial, as it is important to prevent the denaturing of intracellular proteins and enzymes, limiting the capability for essential cellular processes to occur. A pH of 6 is optimum for most Fungi species as they prefer slightly acidic conditions, which can also be altered by products of metabolic processes (Bertalan, 1994).

Temperature promotes or prevents microbial growth due to the influence it has on enzyme reactions. Micro-organism are categorised into four groups depending on the optimal temperature and range at which they grow (Wareing, Stuart, & Fernandes, 2011).

The availability of free water within the substrate, is required for microbial growth. Fungi require water to absorb nutrients, a moisture content of more than 20% (Bertalan, 1994), as they secrete enzymes within a high water content slime called glucan, which transports the enzymes onto the substrate, that break down complex materials into more simple and soluble materials that is absorbed by the fungi. Hyphae also require water to transport nutrients from the substrate to the mold and to remain turgid (Bertalan, 1994). Air movement increases evaporation rate, drying the substrate, prevent the retention of moisture that mold favours for optimum growth.

Fungi are able to utilise most of the natural occur compound and elements required cellular activities and energy. The content of nutrition is significant in the development and growth of Fungi, where a substrate with a rich content of nutrients is able to compensate in part for the adverse effects of the other stated ecological factors (Bertalan, 1994).

), which contribute to amino acid degradation and hydrolysis (Estrela, 2002).

The antimicrobial properties of Hypochlorous acid is also found in humans, where the mammalian defence system uses Hypochlorous acid to kill invading microorganisms (Winter, Ilbert, Graf, Özcelik, & Jakob, 2008). The antimicrobial properties are a result of the produced chlorine when hypochlorous acid interacts with organic tissue that acts as a solvent. The chlorine combines with the protein amino group to form chloramines, which interferes with the cells metabolism. Chlorine is also a strong oxidant, which expresses another antimicrobial property. This property leads to irreversible oxidation of the SH group (Sulfhydryl) of proteins, in an essential enzyme (Estrela, 2002). The associated pH of sodium hypochlorite, at 11, effects the enzymatic activity located, extracellular and in the cytoplasmic membrane, which are responsible for essential functions. This is particularly true for fungi as the increase in pH may inhibit the activity of the secreted digestive enzymes, which are essential for making food more soluble. The absorption of nutrients is passive, may also increase the intake of Hypochlorous acid and Hypochlorite ions, which because of the cell wall chemical structure, primarily chitin and glucan, Hypochlorite and Hypochlorous acid can easily penetrate (Mule, 2013).

Organic acids, such as acetic acid in vinegar, are commonly used as antimicrobial acidulants to preserve food. Many pathogenic microorganisms, including M. heimalis (Prevoo & Starink, 1991)¸ are unable to develop at pH levels below 4.5, where acidification prevents microbial proliferation. Acetic acid’s reduction in pH in the substrate results in the disruption of membrane transport and permeability, anion accumulation, a result of the reduction of intracellular pH levels, caused by the dissociation of Hydrogen ions from acetic acid (U.S. Food and Drug Administration, 2013).

Tea Tree Oil’s active ingredient are terpene hydrocarbons, which cross cellular membranes and disrupt vital intracellular functions. Terpene “inhibits glucose-induced medium acidification,” which occurs due to the displacement of protons from the “plasma membrane ATPase, which is fuelled by ATP derived from the mitochondria” (Carson, Hammer, & Riley, 2006). The effect of terpene on mitochondria is expresses by the disappearance of respiratory control and de-energisation of the mitochondria (Sikkema & Poolman, 1995).

Clove Oil is made up of 60-90% of the active ingredient, eugenol (Maheshwari, 2012). Cells in the presence of eugenol, had an increased membrane permeability and results in the disruption of the cell membrane. This is the result of the hydrophobic properties of eugenol, which disrupts lipids in the cell membrane, reducing structural integrity of the membrane, resulting in an increase permeability. The result increases disruption on enzyme ATPases, and therefore, in turn also results in ion and other cellular content leakage (Li, 2011).