Drosophila melanogaster, known generally as a fruit fly, is a cost-effective model organism with certain qualities that make it an ideal research tool in various fields of science. Drosophila melanogaster are preferred over vertebrate models as a research tool in genetic studies due to its basic food requirements, its ability to produce large numbers of progeny in a short period of time, and quick life cycle. Depending on diet and stress its life span ranges up to an average maximum of 120 days. They are also easy and inexpensive to culture in a laboratory environment, not to mention they take up very little space. In addition, they have diverse phenotypic traits that are easily observable. Its anatomical features like the compound eye allow easy access for phenotypic characterization. They also have abundant genetic variation in a relatively small genome. Approximately 13,600 protein-coding genes are located in only four chromosomes. Many heredity variations can be studied in these flies.An example of this is the gene that codes for eye color in Drosophila, which can result in red, sepia, white, or brown phenotypes. This unique ability to generate many different phenotypes provides D. melanogaster its practicality as an effective research tool for the study of the relationship between genotype and phenotype.

Students in groups of two were given a number corresponding to a specific fly stock vial. Two culture vials pre-filled with food and cotton plugs were collected at the front of the classroom. The group number and initials were written on the vials. Next, the assigned stock vials were obtained and were lightly tapped on the lab bench to remove the flies from the cotton plug. An anesthesia wand was dipped into the FlyNap and carefully inserted through the cotton plugs into each stock vial. The stock vials were immediately placed horizontally on the lab bench after, preventing the flies from drowning in the food media. After waiting a few minutes for the flies to fall asleep, the wands were removed from the vials and the flies from each vial were dumped onto separate index cards. The flies were observed under a dissecting scope and found to be either male or female based on the body morphology. A lamp light was used for an easier inspection. Using a brush, 5 male and female flies from each cross set were transferred to the culture vials. Once again, the vials were made sure to be placed horizontally on the lab bench. Each culture vial was sealed with a cotton plug, and the leftover flies were returned to the stock vials. The vials were returned to the TA for storage. Once larva could be seen in the fly culture vials, the parent flies were put to sleep and removed from the vials to avoid backcrossing. Once it was evident that many F1 offspring had matured into adults, the flies were put to sleep and dumped onto notecards. The flies from the assigned cross set were observed under a dissecting microscope, and the eye color and wing presence was recorded for each fly. For cross set E, both the sex and phenotype for each fly was recorded. After every F1 generation fly was counted for each cross set, they were dumped into the morgue.

The F1 data that was collected for cross set C is indicated in Table 1. The number of flies for each phenotype is shown. 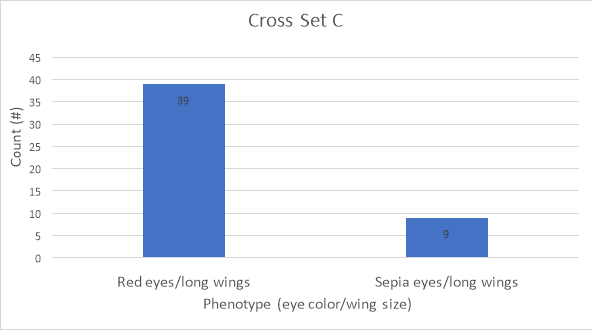 Figure 1 presents the data from Table 1 in the form of a bar graph. According to this data, there were more flies with wildtype red eyes (39) compared to flies with sepia eyes (9). There was a total of 48 flies for cross set C.

The F1 data that was collected for cross set E is indicated in Table 2. The number of flies for each phenotype and sex is shown. 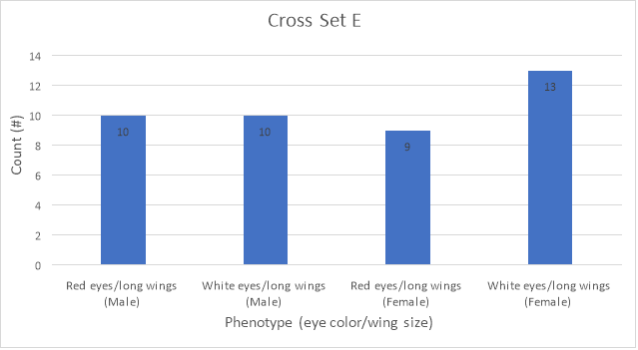 According to the results of this experiment, our research hypothesis was supported in each mating cross. We hypothesized that the expected phenotypic ratio for a cross with red-eyed wildtype flies would be 3:1, because according to the Mendelian Law of Segregation, the two alleles are separated from each other during gamete formation. Cross set C produced about three times as many red-eyed wildtype flies compared to sepia-eyed flies, confirming our hypothesis. For our other monohybrid cross, we wanted to know what the expected phenotypic ratio would be when crossing wildtype red-eyed flies with mutant white-eyed flies. We hypothesized that the expected phenotypic ratio would be 1:1 due to the Mendelian Law of Segregation. Cross set E produced equal amounts of red-eyed flies and white-eyed flies, confirming our hypothesis. The ratios obtained for cross sets C and E accurately reflected the expected results for a monohybrid cross and test cross respectively, as claimed by Mendel’s law of segregation. The results of the chi-square analysis show that the observed counts were very close to the expected counts. The p-values for both cross sets C and E were between 0.1 and 0.9. Since these p-values were larger than 0.05, it was concluded that we should fail to reject the null hypothesis. Failing to reject the null hypothesis means that the observed data was not statistically different from the expected data.

The mode of inheritance for cross set C was determined to be complete dominance. In complete dominance, the dominant allele completely masks the effect of the recessive allele when both are present. Since both parents were found to be heterozygous for eye color (Bb), the dominant red allele masked the effect of the recessive sepia allele. The F1 data for cross set C demonstrates that wild type red eyes are dominant over sepia eyes, since the ratio of red-eyed flies (BB or Bb) to sepia-eyed flies (bb) was calculated to be 3:1, as expected for a monohybrid cross according to Mendel’s law of segregation.

The mode of inheritance for cross set E was determined to be X-linked. Genetic conditions with an X-linked recessive inheritance pattern usually affect only the males in a family. This is because they are caused by altered or mutant genes found on the X-chromosome. Females are born with two X-chromosomes, so the effects of a working gene on one can mask the effects of a mutant gene on the other, which is similar to complete dominance. They will normally be unaffected carriers of the condition. Males have only one X-chromosome, so if they inherit one with a mutant gene (XwY), they will be affected. The F1 data for cross set E demonstrates that the traits for red eyes and white eyes are located on the sex chromosome, since the ratio of red-eyed flies to white-eyed flies was determined to be 1:1. This indicated that the red-eyed female flies were heterozygous for eye color (X+Xw), since the contribution of a mutant allele from both parent flies would result in offspring with red eyes and white eyes in equal proportions.

These results are comparable to the data from Thomas Hunt Morgan’s experiment with D. melanogaster. In his experiment, he discovered a mutant gene affecting eye color. This mutant gene was expressed as a white color in the eyes. Morgan proceeded to discover that the gene for eye color was inherited in different ways depending on the sex of the fly. This difference came from the fact that female flies have two X chromosomes, while male flies only have one X chromosome and a Y chromosome. Morgan found that this gene had a similar inheritance pattern to the X chromosome. Thus, Morgan concluded that this gene was X-linked.

A limitation of this experiment is the fact that we only counted progeny during one session. Multiple trials of counting offspring may have produced closer values to the expected ratios of Mendel’s law of segregation. Another limitation would be the difficulty of identifying male flies from female flies in a quick and efficient manner.

This research has demonstrated the practicality and versatility of D. melanogaster as a tool for research in the lab. Although these fruit flies may seem like very simple and insignificant organisms, they allow us to do research that may otherwise not have been possible. I plan to conduct further studies with D. melanogaster in the field of pharmacology. Since humans share key physiological processes with this organism, D. melanogaster would serve as an effective model for drug discovery. I aim to generate a new drug compound that would greatly aid in the treatment of type 2 diabetes. I hope that the research conducted with these flies will allow for greater discoveries in various fields of science that will contribute to the advancement of mankind.