Lysosomes are organelle found in the cytoplasm of eukaryotic cells and are often referred to as the “stomach of the cell.” Lysosomes were discovered in 1949 by a Belgian cytologist, Christian De Duve (Inpanathan and Botelho, 2019). De Duve recieved the 1974 Nobel Prize for Physiology or Medicine for his discovery of lysosomes and peroxisomes. Once viewed as a “simple acidic organelle,” in charge of digesting unwanted macromolecules, microbes and other particulates, lysosomes have been found to be more complex and dynamic (E. Lawrence and Zoncu, 2019).

The membrane which surrounds the lysosome is important for the protection of the cell and to ensure hydrolytic enzymes do not leak out of the lysosome and into the cytoplasm (Nehra, 2019). The list of functions assigned to lysosomes include catabolic processes, nutrient sensing, metabolic signal transduction and regulating a variety of other immune responses (Inpanathan and Botelho, 2019). Signalling role allows for the balance between catabolic and anabolic processes within the cell. Autophagy, a “self-eating” process of lysosomes allows for quality control and stress adaption (Lawrence and Zoncu, 2019). Lysosomes are essential for cellular homeostasis, adapting and responding to environmental and cellular changes, allowing survival. (Inpanathan and Botelho, 2019).  Lysosomes also concentrate metal ions within their lumen, preventing harmful accumulation in the cytoplasm. Controlled release of calcium from the lysosomal lumen regulates fusion with other membrane compartments, an important factor for lysosomal function (Lawrence and Zoncu, 2019). Some products of lysosomal digestion are exported to the cytoplasm for immediate utilization, whereas others are stored for later use or to buffer the cytoplasmic concentrations of these species. Lysosomes growing incorrectly or faults in their catabolic programmes, drives cancer, neurodegeneration and age-related diseases (Lawrence and Zoncu, 2019).

Lysosomes are membrane bound organelle and are spherical structures, made up of a lipid bilayer that encloses hydrolytic digesting enzymes, ranging in size from 0.1- 1.2 µm (Nehra, 2019). The structure of lysosomes varies depending on the organism. Lysosomes are formed by budding off of the Golgi apparatus (Inpanathan and Botelho, 2019). The membrane surrounding the lysosomes containing hydrolytic digesting enzymes serves as a protective barrier for the cytosol which contains important cellular organelle. The lysosomal enzymes are acidic which is caused by protons being pumped across the lysosomal membrane from the cytosol. Lysosomes work best at a pH between 4.8-5 pH units. The hydrolytic enzymes are formed by the endoplasmic reticulum, are tagged with the molecule mannose-6-phosphate and moved to the Golgi apparatus to be distributed to the lysosomes (Inpanathan and Botelho, 2019). Examples of enzymes present in these organelles are enzymes found in the nucleus, proteins, lipids and carbohydrates (Desphande, 2019).

The lipid bilayer consists of phospholipids, which are molecules that

have hydrophilic phosphate group heads, a glycerol molecule, and hydrophobic fatty acid tails. Due to the differences in hydrophobic and hydrophilic molecules, phospholipids naturally form double-layered membranes when placed in a solution containing water. The ‘water loving’ phosphate group heads move to the outside of the bilayer, while the ‘water-hating’ fatty acid tails move to the inside to be away from water. Bilayers are usually found in close proximity of one another, between 5-20 nm due to specialised tethering proteins. Tethering proteins surround specialised lipid-binding domains that cause rapid transport of lipid molecules, usually phospholipids and sterols (Lawrence and Zoncu, 2019). Due to the hydrophobic nature of lipids, it allows simple and efficient transport of lipids between donor and acceptor compartments because they cannot freely diffuse. The thermodynamic drive to ensure that transport occurs in the desired direction is typically provided by counter-transport of another lipid along a strong concentration gradient (Lawrence and Zoncu, 2019).

Lysosome–mitochondria contacts seem to play metabolic regulatory roles, as they may assist efficient transfer of lysosome-derived metabolites into the mitochondrial matrix to fuel the tricarboxylic acid cycle. Lysosomes move towards and away from the cell centre at high speeds (several micrometres per second), continuously fuse with each other and with other organelles including endosomes, phagosomes and autophagosomes, and reform by tubulating out of the resulting hybrid organelles (Lawrence and Zoncu, 2019). Phospholipids are components of other membrane-containing organelle of the cell, such as the cell membrane, the nuclear membrane, the Golgi apparatus, and the endoplasmic reticulum.

Lysosomes obtain a variety of cell functions vital for cell viability. Three main cellular catabolic functions are autophagy (destruction of improperly functioning cells), phagocytosis (“cell eating”) and endocytosis (digest food molecules). Other important lysosomal functions are nutrient sensing, metabolic signal transduction and regulating a variety of other immune responses. The main function of mTORC1 is to sense the nutrient content of the vacuole. The growth regulator mTORC1 protein kinase is recruited and activated in response to nutrients from the lysosomal surface (Lawrence and Zoncu, 2019). MTORC1 causes down-stream anabolic pathways, leading to growth at cellular and organismal level (Lawrence and Zoncu, 2019). GATOR1 deletions have been observed in human cancers, indicating that aberrant mTORC1 nutrient sensing could promote cancer cell growth and proliferation (Lawrence and Zoncu, 2019).

The role of mTORC1 is to foster anabolic and growth functions by stimulating proteins, lipid and nucleotide synthesis, all while suppressing catabolic functions such as autophagy and degradation (Inpanathan and Botelho, 2019). MTORC1 is responsible for important functions of lysosomes, cell growth and the overall health of the cell. The lysosome allows for the organisation and regulation of the function of mTORC. To be activated, mTORC1 requires two major inputs: localization to lysosomes via Rag GTPases, followed by interaction with GTP-loaded Rheb GTPases (Inpanathan and Botelho, 2019). The detachment of mTORC1 from the lysosome that occurs in nutrient-poor states strongly promotes autophagy initiation.

Phagocytic receptors bind ligands of a target particle to encourage the phagosome to engulf and isolate the particle.  Signal transduction pathways are responsible for the remodelling of the plasma membrane and are caused by engagement of the phagocytic receptors. It is performed by the actions of actin polymerization and localized exocytosis, which causes cup-shaped invaginations of the cell membrane forming phagosomes. The phagosome is then released into the cytoplasm and fuses with endosomes, obtaining their properties. They are then replaced and stripped by properties that mimic late endosomes and lysosomes.

After post-particle degradation, the fate of phagolysosomes is unclear. According to studies, the typical view is that phagolysosome in multicellular organisms are likely to be reabsorbed into the endomembrane system.

Lysosomes can detect the onset of infection and can facilitate immune responses against the emerging pathogen threats, which is partly encoded by effects on the lysosome-localized TSC via cytokine signalling (Inpanathan and Botelho, 2019).

Lysosomes functions are crucial for cell life and therefore, if the lysosome is not functioning properly, it can cause serious consequences, to the cell and the organism. Autophagy dysfunction can cause neurodegenerative disease and play a role in human cancers.

Lysosomes have been involved in human disease for numerous years. Lysosomal storage disorders, due to the build-up of digestion products in the lysosomal lumen is caused by mutations in genes encoding luminal hydrolases and membrane permeases (Lawrence and Zoncu, 2019). The result of these mutations can cause neurodegeneration, metabolic imbalances and severe growth retardation (Lawrence and Zoncu, 2019). A general loss of cellular quality control is increasingly viewed as a shared contributing factor in these diseases. Storing abnormal levels of digestion products in lysosomes of cells affects the cell’s basic functions, which includes fusion with autophagosomes and transportation of molecules (Lawrence and Zoncu, 2019).

Alzheimer’s disease is characterized by intracellular aggregates of the tau protein and extracellular β-amyloid (Aβ) plaques (which derive from cleavage of amyloid precursor protein into the 42-amino acid Aβ peptide). Accumulation of cleaved Aβ within the lysosomal lumen, in turn promotes progressive impairment of the autophagy–lysosome system (Lawrence and Zoncu, 2019).

The lysosome is emerging as a driving force in the progression of numerous human cancers, in which enhanced function of the autophagy–lysosome system enables efficient nutrient scavenging and growth in nutrient-poor microenvironments (Lawrence and Zoncu, 2019). Lysosomes play important roles in the progression of a wide range of human cancers. Several core functions of the lysosome, including its ability to undergo exocytosis, to sequester small molecules within its lumen and to scavenge nutrients from proteolytic degradation, become enhanced in transformed cells and contribute to cancer progression (Lawrence and Zoncu, 2019). Thus, targeting lysosomal function is emerging as a promising avenue in several malignancies.

Neuronal cells are exceptionally reliant on the correct function of their lysosomal system for survival. Being post-mitotic, neurons are unable to dilute damaged organelles and protein aggregates among their progeny and must clear waste with high efficiency (Lawrence and Zoncu, 2019). Autophagosomes play a key role in the clearance process by continuously engulfing neuronal cell waste and delivering it to lysosomes for destruction (Lawrence and Zoncu, 2019). The essential role of autophagy is underscored by the fact that genetic inactivation of autophagy in the central nervous system results in spontaneous neurodegeneration in the absence of known disease-causing genetic alterations.

There is evidence of compromised autophagy–lysosome function in several other neurodegenerative diseases including Huntington’s disease  (Lawrence and Zoncu, 2019). The triggering mechanism is different in each case, but disruption of proteostasis and quality control via autophagy impairment could be the ultimate common cause of the affected neuronal cell populations (Lawrence and Zoncu, 2019).

To conclude, lysosomes which were once viewed as “simple” organelle play a key role in survival to the cell and the organism. Lysosomes functioning properly is equally important as to lysosomes that are dysfunctional due to the serious and life-threatening consequences such as neurodegenerative diseases and cancers. Storing abnormal levels of digestion products in lysosomes of cells affects the cell’s basic functions, which includes fusion with autophagosomes and transportation of molecules. Manipulation of mTORC1 signalling is viewed as a potentially promising therapeutic avenue in protein aggregation disorders. Targeting lysosomal function is emerging as a promising avenue in several malignancies. Future investigations of the emergence of cutting-edge techniques to study lysosomal function in both cellular and in vitro contexts will undoubtedly uncover more information about lysosomes and hopefully find ways for illnesses caused by lysosomes to be cured. 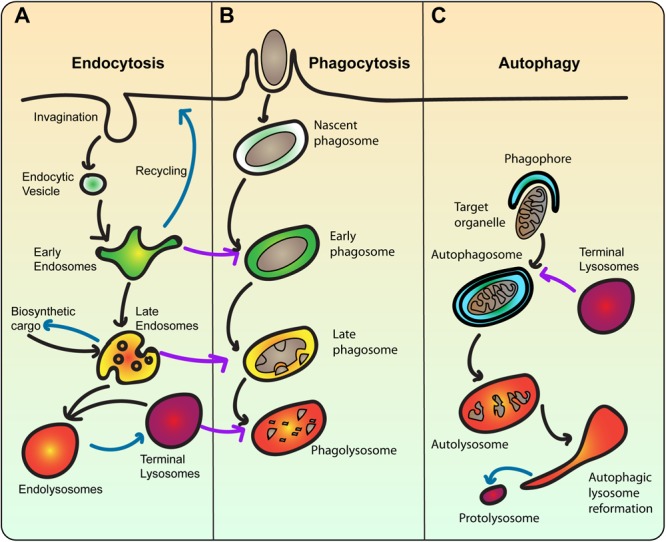 The first image illustrates the three main functions of lysosomes (Inpanathan and Bothelo, 2019).

The second image is of the process of autophagy- the fusion of a lysosome with an autophagosome. (encyclopedia brittanica, 2019) 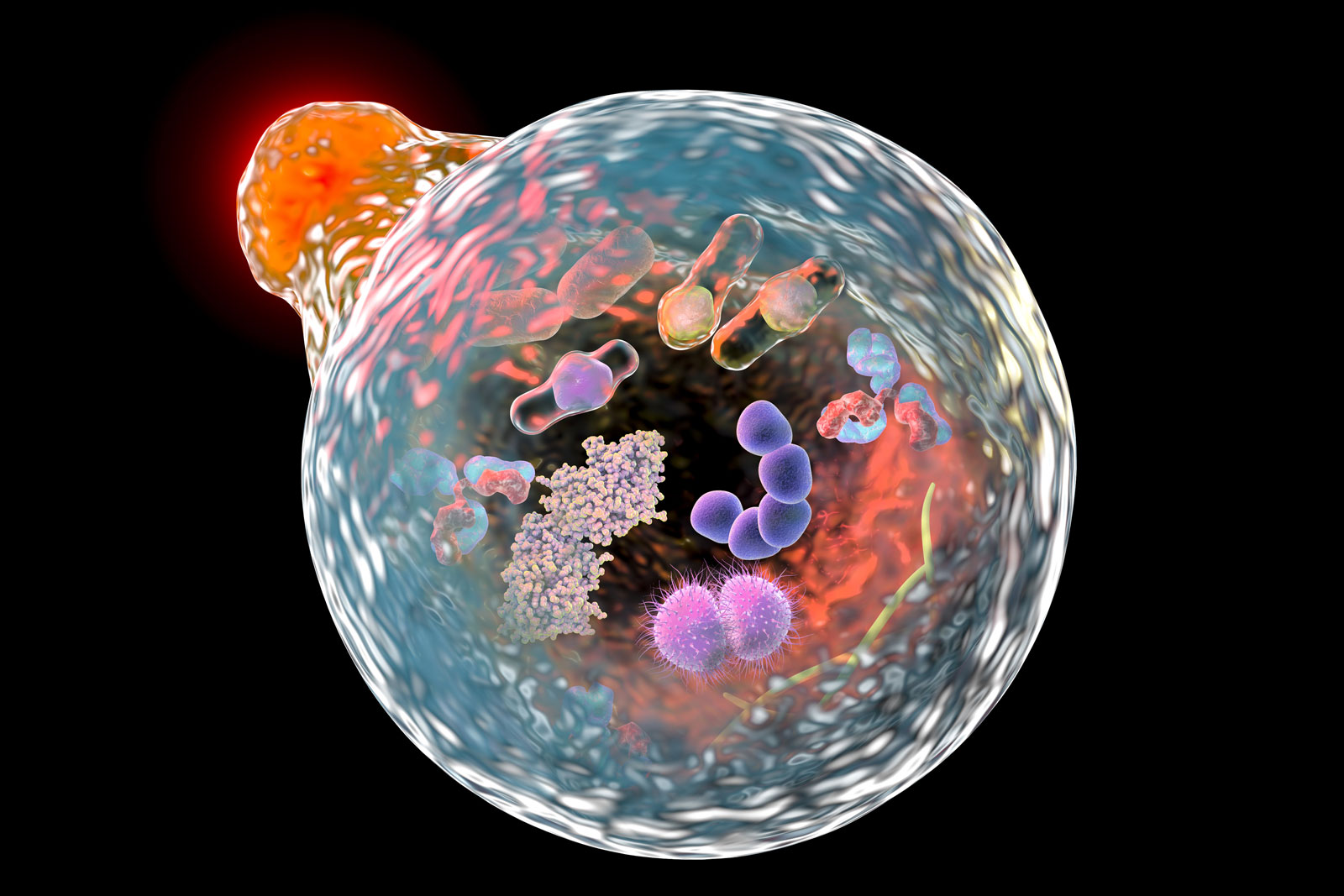