Objective: In these experiments, we aimed to perform fundamental microbiology laboratory techniques. These include; testing the effectiveness of face masks; understanding the effectiveness on handwashing and direct transmission, performing a gram stain; performing a streak plate for isolation, and reviewing colony morphology and cell descriptions.

Procedure (I): Effectiveness of Masks

In the observations of performing a cough without a barrier grew visual circular opaque.The TSA plate of a cough with barrier showed a singular circular colony. 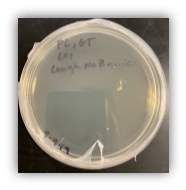 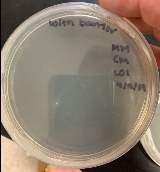 After incubation, direct transmission from person to person showed dense opaque colonies. The TSA plate demonstrating colonies after handwashing have dispersed circular colonies that are opaque. In performing a streak plate isolation, isolated colonies were grown. Figure 4. Streak plate after incubation for 24 hours at 37°C.

Reviewing andPreforming fundamental microbiological techniques aided in making laboratory practice safe and efficient. On the TSA plate where no barrier was used to prevent microbes form colonizing, more culture was grown, on the media where a protective barrier was used, only a single colony was observed. While this colony can be accounted for from contamination from the experimental bench, testing the effectiveness of masks demonstrated that when there is a protective barrier like a mask to block bacteria between source and receiver less pathogens are transmitted. By the implementation of protective barriers in health care settings and/or school, we can expect to see less bacterial and viral infections through direct contact.

In the comparison of direct transmission to handwashing, the TSA plate of direct transmission showed dense white opaque colonies. These colonies decreased in density as we got to transmission to quadrant 4. In observing the colonies on the TSA plate after handwashing, colonies drastically decreased in density and appear more dispersed. This dispersion is to be expected, as implicated by research, washing hands with soap and water decreases microbes pathogenic and nonpathogenic on the area of contact (1).

After gram staining the culture of E.coli and S. epidermidis, we expect to see both gram positive and gram negative cultures on the slide. After 100x oil immersion, we were able to successfully stain S. epidermidis with crystal violet and use a mordant to increase the stains adhesion to the cell wall. To stain the gram negative culture of E.coli we used a secondary stain as after decolorating, the gram negative cells are not able to remain stained due to the thinness of the bacteria’s cell wall. As shown in figure 3, the pink bacteria (E. coli) show a colony margin that is single bacillus, which is consistent with expectations. The purple stained bacteria (S. epidermidis) has a colony margin that is dicocci. Our conclusions are supported by the Staphylococcus genus, as most of the species derived from this genus are consistent with cocci type morphology (2).

In performing individual steak plate to isolate independent colonies, there were several factors accounting for the inconsistency in gradient across the five sectors. The first is inaccurate quenching from sterilizing heat source to TSA media. There is likelihood that quenching was not sufficient and when streaking section to section killed the cultures from previous sections. Due to the variable transition section to section, the isolated colonies could be accounted for by contamination and improper aseptic technique.

In future experiments more technique review must be done to reinforce basic biochemical test and aseptic techniques. In obtaining more consistent practices, more reliable results are to be expected.