Vegetables are edible parts of plants or the whole plant itself that is intended for human cooking or eating raw (Vainio and Bianchini, 2003). Vegetables have a particular role in the diet of humans because they contain different vitamins and minerals necessary for the wellness of the human body. In order to prolong the life of vegetables, which are living tissues, techniques for increasing the shelf life of vegetables such as rapid post-harvest cooling is being done since it minimizes respiratory rates and inhibits the growth of decaying microorganism (Kohli, 2008).

Lettuce (Lactuca sativa) and Chinese cabbage (Brassica rapa) are leafy types of vegetables. Lettuce contains different vitamins and minerals such as calcium, phosphorus, iron and vitamin C. It is mostly and easily produced on regions under relatively cool and mild temperatures (Ryder, 1999). Chines cabbage locally known as Pechay Wambok on the other hand, is the most important vegetable being grown in China. However, due to trade and exchanges, it has been also being grown in different parts of the world. This vegetable is also known to contain different vitamins and minerals like calcium, potassium, and vitamins C and A (Tatekar and Griggs, 1981).

Osmosis is defined to be as the cellular or artificial diffusion of free water across a selectively permeable membrane like the cell. In studying this, it is necessary to know the solute concentration and membrane permeability thus leading to tonicity, the ability of the cell membrane to gain or lose water. The medium at which the cell is exposed can be classified as isotonic, hypertonic and hypotonic. Hypertonic means the cell has a lower concentration than the medium while hypotonic refers to the higher concentration of the cell than that of its medium. Isotonic concentration on the other hand, means equal concentration of both cell and the medium (Campbell et.al. 2011).

This study was conducted on November 17, 2014 at Room C-117 of the Institute of Biological Sciences, University of the Philippines, Los Baños.

Thin layer from the midrib of the freshly harvested Chinese cabbage (Brassica rapa) was obtained. The layers were cut into four and were placed in four different glass slide and label as PA (Pechay A), PB (Pechay B), PC (Pechay C) and PD (Pechay D). 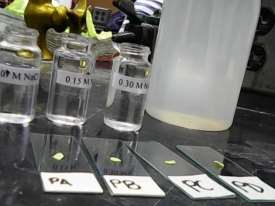 The steps were repeated using the Lettuce (Lactuca sativa) leaf.

Table 1. Figures of cells of lettuce and cabbage exposed in different media.

The isotonic concentration of sodium chloride to lettuce and Chinese cabbage was determined. Thin layer from the midrib of each of the freshly harvested leaves was obtained and cut into four. Per vegetable, the divided leaf was distributed to four glass slides and the slides were differentiated by labeling A, B, C, and D respectively. NaCl solutions of 0.05 M, 0.15 M, and 0.30 M were added to slides A, B, and C respectively while distilled water was added to slide D that served as the control group. The appearance of the cells in slides A, B, and C was compared in slide D.

Therefore, the isotonic condition of both lettuce and Chinese cabbage to salt solution is 0.15 M.

However, due to lack of equipment, it is recommended to do this experiment again in a proper laboratory. Furthermore, the specimens shall be observed under an electron microscope to get quantitative results.