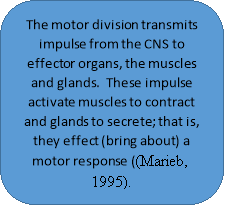 The sensory neuron evokes the sensation of pain, touch, hearing vison and taste. It receives its fundamental stimuli from the sensory organs such as the skin, eyes, etc. it is responsible for changing the external stimuli into electrical impulses within the body.

Located in the spinal cord and brain relay neurons (interneurons) receive signals from the sensory neuron and other neurons. When the relay neuron receives a signal it then decides on the response needed. If a response is required it will then be passed onto the motor neurons.

Nerve impulses react when stimulus arouse the cell membrane which then causes the sodium channels to open up. Sodium ion releases in the cell, weakling its charge change at its destination. When its charge levels are high enough it will cause the neighbouring voltage sodium channels to open up, once this happens it allows the other sodium ions to enter the cells at the required destination. Membrane at that location is depolarised and the nearby region within the cell creating a net positive charge, and the exterior having a net negative charge. Enclosing voltage gated sodium channels are effected generating them to open and move the depolarisation over the membrane. These actions take place behind the action potential to rebuild the silent membrane potential. The channels shut with the voltage gated sodium potassium channels open. This permits a speedy discharge of potassium ions from the cell, causing the once depolarised membrane to become repolarised, returning the inside to negative and the outer positive. Alongside this is the use of the sodium pumps to completely restore the dozing membrane potential and restore the correct concentrations of the sodium and potassium both external and internal of the cell.

Within the nervous system a synapse is a small structure at the end of a neuron which allows information to be sent via an electrical or chemical signal from one neuron to the next, an important part of the neuronal function. The synapse consists of three primary parts, the presynaptic endings, the synaptic cleft and the postsynaptic ending which has the receptor sites.

In the relax arc the sensory information is processed at the level of the spinal cord It results in actions without the help of the brain. The reflex actions are fast and take place without thinking. If you was to prick your hand, the hand would be quickly pulled away from the cause. At the same time the brain would receive information advising that an agonizing event has taken place. Even though the brain might perceives the stimulus, it’s the relax arc that actually works to retract the hand without the brains direct action. 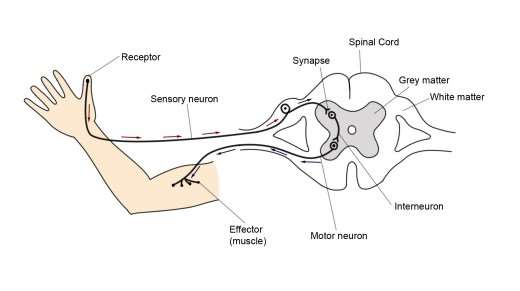 Insulin is a hormone which is made by beta cells within the pancreas, an organ that Is located behind the stomach. Insulin is responsible for how our body uses and stores glucose and fat, various parts of the bodys cells rely on insulin to remove gluscose from within the blood for its energy.

It has various effects on the bodys uses but mainly its use is in controlling how the body handles carbohydate and the fats found within food. Insulin purmits cells within the liver, muscles and fat to take the sugar which has taken into the bloodstream providing energy into the cells. Gluscose can also be transformed into fat to then provide energy when the glucoses is low. Along with this, insluin controls other metabloic effects such as the ceasing the breakdown of proteins within the body.

Glucagon is generally released when the bloods sugar levels are to low or due to heavy exercise. Glucagon is a hormone that is created and secreted by alpha cells in the pancreas. It’s closely linked to insulin but produces the opposite actions.

Glucagon actives the muscles and liver to break up glycogen which has been stored, converting it to glucose (glycogenosis) the converting of amino acids and releasing it into the bloodstream. Its action to food intake depend on what has been eaten. Meals based with carbohydrate causes the blood levels to in the glucagon to drop, stopping the glucose from becoming too high. High protein food intake causes the glucagon levels to rise. Extra fatty acids become stored in the body as triglycerides in adipose tissue, the main location for the energy storage.

During the absorptive (while food is being digested) the saved fat is not broken up. In the post-absorptive state (fasting) which occurs during the late mornings, afternoons and during the night. During this energy storage is broken up to give the energy.

Thyroxine and triiodothyronine also known as T4 and T3 are responsible for increasing the bodys metabolic rate. For T3 and T4 to be made the thyroid glands require iodine which is in food we consume. Within the body and tissue nearly all T4 is changed to T3, T3 influences the movement of both the cells and tissues. It is responsible for halting the hypothalamus and pituitary from releasing their own hormones, this makes sure T3 and T4 are only produced when their levels are lowered.

Thyroid hormone effects virtually every cell in the body. Generally speaking, it stimulates enzymes concerned with glucose oxidation. In this way, it increases basal metabolic rate (and oxygen consumption) and body heat production; this is known as the hormone’s Calorigenic effect (calorigenic = heat producing). The thyroid hormone also provokes an increase in the number of adrenergic receptors in blood vessels, so it plays a very important role in maintaining blood pressure. Additionally, it is an important regulator of tissue growth and development; it is especially critical for normal skeletal and nervous system development and maturation and reproductive capabilities (Marieb, 1995).

The human eye is an organ which reacts to light. Out of all the sensory receptors 70% are in the human eye.

It consists of three major layers that lie flat next to each other to form the eyeball. The eyeballs outer layer is a strong opaque membrane named sclera, also known as the white of the eye. In humans all the sclera is completely white with the coloured iris. The bulge type within the sclera at the front is a clear fine, dome shaped tissue known as the cornea.

The middle section is the choroid, also known as the choroidea. At the front of the choroid is the coloured section of the iris. The centre of the iris is rounded opening called the pupil.

Lining the back two-thirds of the eyeball is the retina which consist of two layers, the sensory retina and retinal pigment epithelium. The sensory contains the nerve cells which processes visual information and sends it to the brain. The pigment epithelium lies between the sensory and the wall of the eye and is composed of a layer of hexagonal cells that are tightly packed with pigment granules.

Inside the eye has three sections known as the chambers, anterior chamber, posterior chamber and the vitreous chamber. The anterior chamber is based at the front of the eye between the iris and the corneas innermost surface. The iris is the coloured circle of tissue behind the cornea, it uses muscles to change the sizing of the pupil and controls the amount of light that enters the eye by making it larger and smaller.

The posterior chamber sits behind the peripheral section of the iris and in front of the lens. Light passes through the pupil and to the lens. The lens usually held in its place by the tissue strands coming from the wall of the eye. The tightening or calming of the muscles make the eyes lens change its shape to allow the eye to focus.

The ear is an organ which not only detects and receives sound but is important in aiding the bodies balance and position.

The human ear is divided into three major areas, the outer ear, middle ear and inner ear. The outer and middle ear structures are involved with hearing only and are rather simply engineered The inner ear functions in both equilibrium and hearing and is extremely complex (Marieb, 1995).

The outer ear consists of the auricle also known as the pinna and the external auditory canal. The auricle is the first section of the ear to react to sounds, its funnel like action aids in the directing of sound further into the ear. Without the funnel sound waves would become lost making it difficult to understand sounds.

The middle ear is the part of the ear that is internal to the eardrum but external to the oval window of inner ear and is responsible for the transition of sound from the outer to the inner ear.

When sound waves reach the outer ear they move through the ears canal and travel up to the middle ear. It’s then the job of the middle ear to take the sound waves and change them into vibrations which are delivered to the inner ear. To accomplish this it relies on the eardrum which is a slim layer of skin stretched. When the eardrum vibrates it moves small ossicles from the hammer to the anvil and onto the stirrup. The bones help the sound to move on its journey into the inner ear.