How is walking affected by the use of cell phone created inattentional blindness? 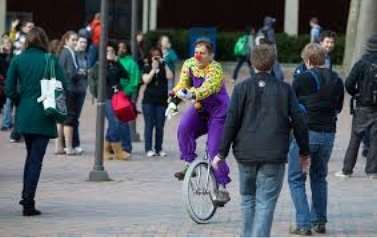 What are the effects of cell phone use while driving in reference to inattentional blindness?

Most people may agree on the fact that texting on a cell phone while driving is not conducive to a safe driving experience, either for the person driving or the general public around them. What is not generally agreed upon is the talking while driving, whether hands on or hands free. In American society, there is a common belief that a person can successfully multitask, when in reality this is not a successful endeavor if that person would like to accomplish all tasks at an optimal level. The brain cannot multitask well (National safety council, 2012). In the example of driving and talking on a cell phone, vision is greatly affected. While driving, the driver gathers most of their information through visual cues. Road signs, traffic signals, and other drivers, all give information to the person driving in order to make safe driving decisions. In recent studies of cell phone use and driving, statistics have shown that at least 50% of the visual information provided to drivers while under the influence of cell phone use, are both “looked at” but remain unseen (National safety council, 2012). This indicates cognitive distracted inattentional blindness occurs regularly among these users. It is contributed to an attentional withdrawal from visual information where the compensation of too much information to the brain is shown by the brain’s decision to to send some of that information to memory (National safety council, 2012). Since the information is not there, then the drivers are unaware that there was any information to begin with. The distracted drivers may look forward through the windshield, but their view is narrowed from the entire environment (National safety council, 2012). 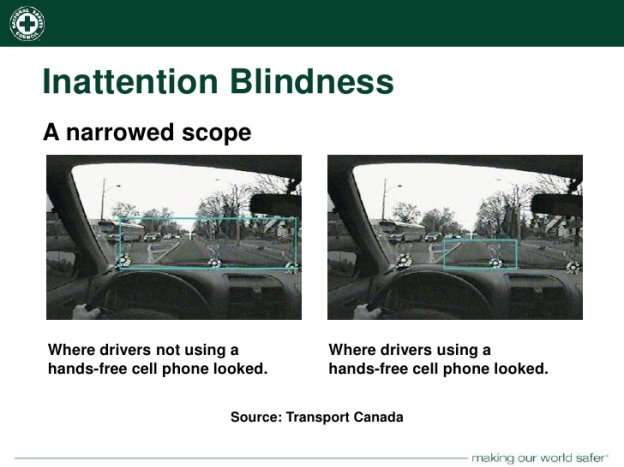