Moose in the Noose?

From Montana to Minnesota, Ontario and Wyoming to Hew Hampshire moose numbers are in steep decline. Could climate change be to blame?

These majestic animals, which can be over 6 feet tall and weigh 700 kg, are a highlight for wildlife enthusiasts visiting America’s northern states and bring in much needed revenue for local communities. They are also important components of the boreal forest ecosystem. Unfortunately these mostly solitary creatures are becoming increasingly more difficult to find by hunters and scientists alike. 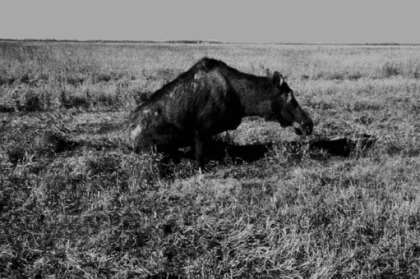 Dwindling populations in Montana have left local people worried and scientists scratching their heads as to why. Currently moose numbers in Montana are not checked regularly, instead they rely on anecdotal evidence from biologists and hunters as to what the situation on the ground is. But many people are worried. Nick DeCesare, the biologist leading the study said “There’s fewer moose out there, and hunters are working harder to find them.” So worried are they that the Montana Fish, Wildlife & Parks (FWP) department have just embarked on a 10 year investigation to track population changes.

By tagging moose with radio collars they can check up on them year after year to measure their body fat and take blood, fecal, hair and teeth samples. They will also check whether they are carrying any diseases or infestations. With this data they’ll be able to tell how healthy the moose are individually and as a population and if any tagged moose die they hope to be able to determine the cause. For the time being though, why numbers appear to be dropping so quickly is a mystery. Mike Gurnett, also from the FWP said “in some parts of Montana, numbers have declined, hunting licenses cut back, and moose counts continue to drop”. 50% fewer hunting licenses were issued by the state between 1995 and 2011.

Likewise in Minnesota, Michelle Carstensen of the state’s Department of Natural Resources is also trying to figure out what is happening to their much-loved moose, so popular that they even had an Ice Hockey team named after them – the Minnesota Moose. Ominously the team was relocated to Winnipeg in 1996.

Numbers in the northwest population of Minnesota have dropped from 4000 in the 1990s to just 100 in the mid 2000’s. This rapid loss drove them to cancel the 2013 moose hunting season altogether in the hope that numbers would rebound. The north-eastern population is also thought to be declining with fewer calves seen over the last 10-15 years than previously. Hunters here too have reported difficulty in finding moose. One of the main causes for this is thought to the liver fluke (Murray et al. 2006), these cause damage to the liver, lungs, and other tissues in the moose’s body along with secondary infections resulting from the damage. This reduces their overall fitness and Murray thinks that the northwest population will cease to exist in 50 years time.

In Ontario, winter ticks are thought to be a major cause of moose deaths. An adult moose can have as many as 30,000 ticks on its body and some have been known be infested with as many as 100,000. All of these blood-sucking ticks can make moose anaemic; the lack of healthy red blood cells causes fatigue due to inadequate oxygen supplies. This lethargy makes it more difficult for the moose to get enough food.

As you can imagine a lot of ticks can be itchy. Moose don’t groom themselves like deer and so scratch themselves by rubbing up against trees. This may be satisfying in the short term – like scratching a mosquito bite – but can be detrimental in the long term. Excessive scratching can remove clods of hair meaning the moose are in more danger of dying from exposure in the winter months.

In New Hampshire, too, ticks are a big problem for the moose. Youngsters feel the effects more than adults, says wildlife biologist Ted Walski, “the 1-year-olds don’t have the blood volume or body size (to cope), which makes them more susceptible.” In the warm winter of 2011 it is thought that nearly all calves born the previous year died as well as 40% of the adults. In relatively extreme event such as this moose populations can rebound the following year, but if the situation persists for prolonged periods recovery is not possible.

Um…What has this got to do with climate change?

The fact that there seem to be a number of different causes for the moose declines in these different areas implies that there may be an underlying cause. Population ecologist Denis Murray suspects that it is climate change.

Moose have evolved to live in cold climates. As such they have thick, warm coats and get stressed if it’s too hot. According to the Intergovernmental Panel on Climate Change, the 30 year period from 1983 to 2012 was probably the warmest period of the last 1400 years in the Northern Hemisphere (IPCC, 2013). Furthermore, temperatures in this region are predicted to rise by 1.5Ëš to 2ËšC in spring and summer between 2025 and 2035 with winter temperatures expected to rise by the middle of the century (Union of Concerned Scientists, 2003).

Montana, Minnesota, and Ontario all have something in common. They’re at the southern edge of the moose’s range – the geographical limit of where they can live comfortably. Moose numbers in southern Sweden, too, have been reported to be dropping. 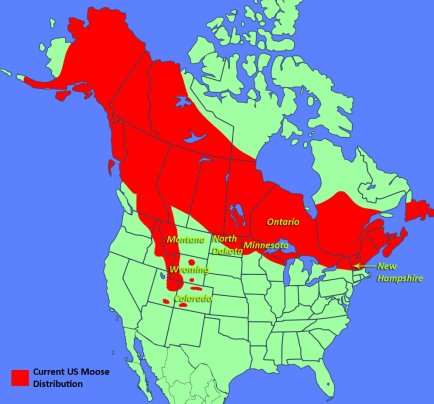 Climate change makes it more difficult for moose to survive in the southern parts of their range. This is thought to be due to the increased heat stress but also the increased survival rate of its pathogens over the winter period.

In these southern areas increased temperatures are felt more keenly by the moose. When they get too hot they seek shelter rather than forage for food. This leads to them being weaker but also stops them from building up important fat reserves for the winter. Biologist Mark Lenarz from the Minnesota Department of Natural Resourses found that increased summer and winter temperatures induced heat stress was one of the main factors leading to an increase in moose deaths (Lenarz 2009).

White-tailed deer are the normal hosts for the live fluke. Deer densities are expected to increase in response to milder winters (Murray et al., 2006) – exposing a higher number of moose to infection. Murray also found that populations of moose were negatively affected by increases in annual temperature

Ticks numbers can also be affected by climate change. To see how we need a bit of info on their life cycle: Ticks emerge from eggs in the late summer. After a short time they climb on to plants like grasses and trees, here they wait as moose brush up against them they attach themselves. They feed and grow into adults during the winter and then mate in January to February, shorter winters mean more survive until this time. In April they start to detach and fall to the ground to lay their eggs and the cycle continues. However, if temperatures are low there is more snow around. The white background makes the tick’s dark bodies stand out and they’re more likely to be eaten by birds(Addison et al. 1989). But if it’s warmer and there is less snow cover and the ticks are harder to spot on the dark ground – more adult ticks survive to lay eggs, leading to increased infection rates later in the year which have a negative impact on moose health. Daniel Bergeron, from the university of New Hampshire, thinks that the widespread die-off of moose in the warm, snowless conditions in the winter of 2001 -2 extended the period that ticks could be transmitted to moose (Bergeron 2011). 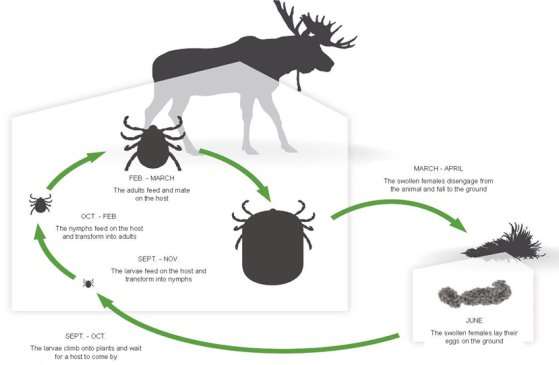 Christy McCain from the University of Colorado Boulder found that larger animals 27 times more likely to react to climate change than smaller animals. This makes them more sensitive to change and so they face the highest extinction risk (McCain and King 2014).

“The things that are responding most to climate change are the things we tend to like the most, that we go to parks to see to see – Big Horn Sheep, Elk, Polar Bears. These are the things that have the highest extinction risk”. Much like the dinosaurs that died out after 65 million years ago, it was the small mammals left behind that were able to adapt to their new environment more quickly and survive.

As well as the threat of climate change there are also threats from logging and especially mining, which currently is not subject to environmental assessment.

Less browsing by moose – loss of natural habitat areas maintained by such grazing, fewer wolves as less moose to hunt.