One of the major environmental problems today is hydrocarbon contamination resulting from the activities related to the petro chemical industry. Accidental release of petroleum products are of particular concern in the environment. Hydrocarbon component have been known to the family of carcinogens and neuro toxic organic pollutant currently accepted disposal method of incineration or burial insecure landfills can become prohibitively expensive when amounts of contaminants are large. Mechanical and chemical methods generally used to remove hydrocarbon from contaminated sites have limited effectiveness and can be expensive. Bioremediation is the promising technology for the treatment of these contaminated sites since is cost effective and will lead to complete mineralization. Bioremediation functions basically on biodegradation which may refer to complete mineralization of organic contaminants into carbon dioxide, water, inorganic compounds, and cell proteins or transformation of complex. Organic compounds by biological agents like microorganism. Many indigenous micro organism in water and soil are capable of degrading hydrocarbon contaminants.

Petroleum based products are the major source of energy for industry and daily life. Leaks and accidental spills occurs regularly during the exploration, production, refining, transport and storage of petroleum and petroleum products. The amount of natural crude oil seepage was estimated to be 600,000 metric tons per year [1]. The process of bioremediation,defined as the use of micro organism to detoxify are remove pollutants to their diverse metabolic capabilities is an evolving method for the removal and degradation of many environmental pollutant. Including the products can be removed including the products can be removed from the environment [2] and cheaper than other remediation technologies [3]. Hydrocarbon in the environment are biodegraded primarily by bacteria, yeast, and fungi. Among them bacteria are the most active agents in petroleum degradation and they work as primary degrader of spilled oil in environment. [4,5]. Microbial degradation is the major and ultimate natural mechanism by which one cleanup the petroleum hydrocarbon pollutants from the environment [6,7,8]. Several bacteria are even known to feed exclusively on hydrocarbon [9]. Floodgate [10] havelisted 25 genera of hydrocarbon degrading bacteria and 25 genera of hydrocarbon degrading fungi which were isolated from marine. The recognition of biodegraded petroleum derived aromatic hydrocarbon in marine sediments was reported by Jones et. al. ,[11]. They studied the extensive biodegradation of alkyl aromatics in marine sediments which occurred prior to detectable biodegradation of n-alkane profile of the crude oil and the micro organism namely, 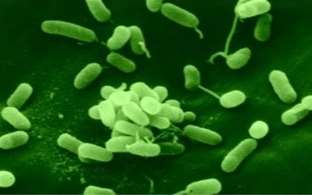 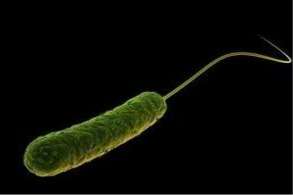 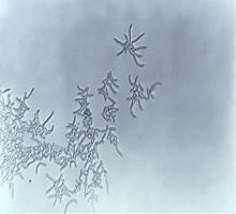 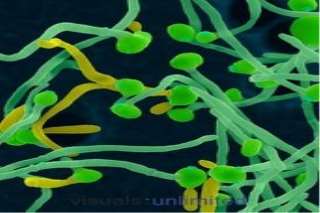 were found to involved for alkylaromatic degradation. These are the microbes which where isolated from the polluted stream which could degrade crude oil which are P. fluorescence, P. aeruginosa, Bacillussubtilis, Bacillussp. , Alcaligenes sp. , Acinetobacterlwoffi, Flavo bacterium sp.

Many bacteria such as Pseudomonas, Archromobacteria, Micrococcus and Candida are capable of degradation petroleum hydrocarbon both in marine and in water habitats. Amongst these, Pseudomonas is most important genus that can utilize petroleum hydrocarbon as carbon and energy source and producing biosurfactants[4]. Among Pseudomonas P. aeruginosa is widely studied for the production of glycolipids type biosurfactants. Biosufactants increase the oil surface area and amount of oil is actually available for bacteria to utilize it[12]. Thus, these bacteria can be used to check pollution after oil spillage. These bacteria have different morphological character features which includes colony shape, size, and surface features.

In the cultural condition of these microbes one approach have often considered for the bioremediation of petroleum pollutant after anoil spill is the addition of microorganism (seeding) that are able to degrade hydrocarbons. Most microorganism considered for seeding are obtained by enrichment cultures from previously contaminated sites. However, because hydrocarbon-degrading bacteria and fungi are widely distributed in marine, freshwater, and soil habitat, adding fertilizers and ensuring adequate aeration. Most tests have indicated that seed cultures are likely to be of little benefits over the naturally occurring microorganism at the contaminated site for the biodegradation of the bulk of petroleum contaminants[13]. Hydrocarbon biodegradation in marine environments is often limited by abiotic environmental factors such as molecular oxygen, phosphate and nitrogen concentrations Rates of petroleum biodegradation are negligible in anaerobic sediments because molecular oxygen is required by most microorganism for the initial step in hydrocarbon metabolism. Oxygen, however is not limiting in well aerated (high energy) marine environments [13]Usually, marine water have low concentration of nitrogen, phosphorus and various minerals nutrients that are needed for the incorporation into cellular biomass and the availability of these within the area of hydrocarbon degradation is critical. Many microorganism of petroleum in the marine environment carried out largely by diverse bacterial population, including various Pseudomonas species. The hydrocarbon –biodegrading population are widely distributed in the world’s oceans; surveys of marine bacteria indicate that hydrocarbon-biodegrading microorganism are ubiquitously distributed in the marine environment. Generally, in pristine environment the hydrocarbon-degrading bacteria presumably utilize hydrocarbons that are naturally produced by plant, algae, and other living organism. They also utilize other substrates, such as carbohydrates and proteins. When an environment is contaminated with petroleum, proportion of hydrocarbon-degrading microorganisms increases rapidly. In particular, in marine environments contaminated with hydrocarbons, there is an increase in the proportion of bacterial populations with plasmids containing genes for hydrocarbon utilization. The proportion of hydrocarbon-degrading bacterial populations in hydrocarbon contaminated marine environments often exceeds 10% of the total bacterial population [13]. The major metabolic pathway for hydrocarbon biodegradation are well known. The initial steps in the biodegradation of hydrocarbons by bacteria and fungi involve the oxidation of the substrate by oxygenases, for which molecular oxygen is required. Alkanes are subsequently converted to carboxylic acids that arefurther biodegraded via β-oxidation (the centralmetabolic pathway for the utilization of fatty acids from lipids, which results in formation of acetate which enters the trocarboxylic acid cycle). Aromatic hydrocarbon rings generally are hydroxylated to form diols; the rings are then cleaved with the formation of catechols which are subsequently degraded to intermediates of the tricarboxylic acid cycle. Interestingly, fungi, like mammalians enzyme system, form trans-diols,whereas bacteria almost always form cis-diols (many trans-diols are potent carcinogens where ascis-diols are not biologically active). Since bacteria are the dominant hydrocarbon results in themarine environment, the biodegradation of aromatic hydrocarbon results in detoxification and does not produces the non toxic end products carbon dioxide and water, as well as cell biomass (largely protein)which can be safely assimilated into the food web. [13]. 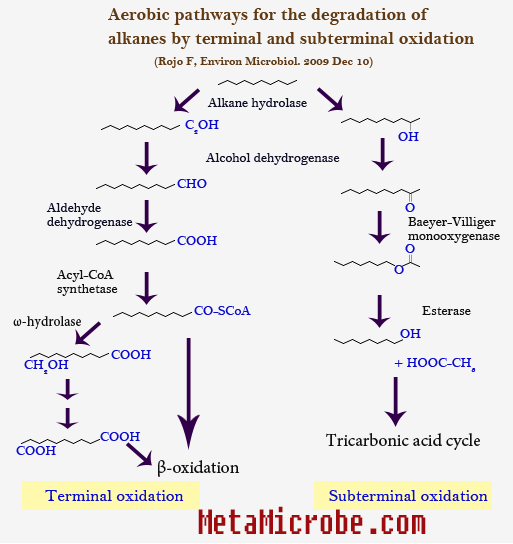 With the revolution in molecular biology, the characterization and typing of microbes has become a matter of some debate. The source of much discussion among systematic biologists is the ordering of bacteria into specific classes. Much of this reassignment is due to the use of genetic methods to identify bacteria based on their DNA profiles rather than their morphology. Like the science of forensics, which is a continuum of methods from exclusion to attribution [14 ] , genetic profiling of microbes is a continuum from which it is sometimes difficult to make clear distinctions. Instead of cutoffs or limits, it is better to compare based on a degree of “sameness” when comparing two strains of bacteria. PCR is a process by which small amounts of nucleic acid is synthesized in vitro to make large amounts of an exact or nearly exact copy of nucleic acid. As a result, PCR has enabled countless new applications in human forensics, medicine, and agriculture by providing enough material for more robust analyses without the need for a living organism. PCR has been the subject of many excellent recent forensic reviews [15, 16, 17 ] and so will be discussed here relative to microbial applications. Briefly, PCR works by amplifying DNA or, in the case of reverse transcriptase PCR (RT-PCR), amplifying RNA. This is possible due to the discovery of thermostable polymerases which retain their ability to extend short oligomers of nucleotides known as primers [ 17 ] . As for all DNA polymerases, a template is required in order for the polymerase to extend the new complementary DNA strand. Therefore, extension of the primer only occurs when the primer is bound to its DNA target. The number of DNA targets is limiting in the reaction initially. So to increase the number of DNA templates after the first extension is complete, the two DNA strands are dissociated by raising the temperature to the point where the DNA “melts. ” When the temperature is lowered, the next primer which is in high concentration in the reaction binds to the DNA template, and the process begins again. Using one primer, the process is rather slow and the increase in the DNA is linear. To make the process of amplification logarithmic, a second primer is added which binds downstream of the fi rst primer on the complementary DNA template and any amplified DNAs which have the DNA template sequence. Therefore, after the first few cycles of primer binding (annealing), primer extension by the polymerase, and DNA melting, amplification of the original DNA template is rare in comparison with amplifications of primers binding and reamplifying newly synthesized DNA. The product of this reaction is a short segment of tens to thousands of base pairs of double-stranded DNA and, in acknowledgement of its synthetic origin, is known as an amplicon. In their most primitive form, amplicons are visualized by gel electrophoresis and staining to determine if the reaction succeeded in producing product and if the product’s size is consistent with predicted results. A whole variety of tools have been developed to make the detection of the amplified products more efficient such as (15) the addition of fluorophores to the end of the primer for direct fluorescent detection of amplicons without staining, (14) the use of internal probes whose exact binding to sequences within the amplicon produces a light-emitting reaction known as Fluorescent Resonance Energy Transfer (FRET) (FRET emission can only occur if the two internal primers are within one base pair of each other and if the amplicon sequence matches perfectly, thus providing sequence information about the amplified product as well as its size), and (15) the addition of intercalating DNA dyes into the reaction. The intercalating dye fluorescence is enhanced only when the dye is able to bind double-stranded DNA. Generally, the template DNA is present in too small a quantity to contribute to the reaction.

Cleaning up of petroleum hydrocarbon in the subsurface environment is a real world problem. A better understanding of the mechanism of biodegradation has a high ecological significance that depends on the indigenous microorganism to transform or mineralize the organic contaminants. Microbial degradation process aids the elimination of spilled oil from the environment after critical removal of large amounts of the oil by various physical and chemical methods. This is possible because microorganism have enzyme system to degrade and utilize different hydrocarbon as a source of carbon and energy.