Photosynthesis is the process in which green plants, algae and cyanobacteria use the energy of sunlight to form carbohydrates from carbon dioxide and water in the presence of chlorophyll. Organisms need complex carbon compounds to build the structure of their cells and to process essential and vital procedures. Some organisms are able to form all the carbon compounds they need using only light energy and simple inorganic substances such as carbon dioxide and water (Alott & Mindorff). Photosynthesis can be described by a chemical equation. The overall balanced equation is:

Plant cells use carbon dioxide and water for photosynthesis. To finish this process, plants also need light energy captured from the sun, which they gain using a separate process. The usable end product the plant produces through photosynthesis is glucose, which the plant uses as food. The oxygen produced as an outcome of this process is a byproduct and is consequently released back into the environment.

Animals and plants both construct fats and proteins from carbohydrates; therefore glucose is an essential energy foundation for all living organisms. The oxygen released as a photosynthetic byproduct provides most of the atmospheric oxygen essential to respiration in plants and animals, and animals in turn produce carbon dioxide vital to plants (Lagassé).

The rate of photosynthesis in a plant can be determined by three external factors: temperature, light intensity, and available carbon dioxide concentration. In any given situation any one of these may become a limiting factor if they are below the optimal level (Alott and Mindorff). According to the concept of limiting factors, under any combination of light intensity, temperature and carbon dioxide concentration, only one of the factors is essentially limiting the rate of photosynthesis. This is the factor that is farthest from its optimum. As the limiting factor is moved closer to its optimum, while keeping the other factors constant, a point will be reached where this factor is not the one that is furthest from the optimum anymore and another starts acting as the limiting factor.

An increase in the carbon dioxide concentration increases the rate at which carbon is incorporated into carbohydrate in the light-independent reaction, and so the rate of photosynthesis generally increases until limited by another factor. Increasing carbon dioxide concentration causes a rapid, significant increase in the rate of photosynthesis, which eventually plateaus when the optimal level is reached.

E. canadensis is a submerse macrophyte, an aquatic plant immersed in water. It has bright green, translucent and oblong leaves which are borne in whorls of three round the stem (Rose and Reilly) (see fig. 1). It is easily available in aquarium shops or pet shops that have aquarium sections. 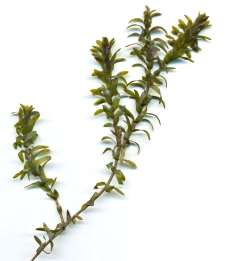 How do different concentrations of carbon dioxide (CO2) solution affect the rate of photosynthesis in Elodea canadensis?

As the concentration of carbon dioxide increases, the rate of photosynthesis will increase until a certain point where it reaches the optimal level and plateaus.

VI. Safety Aspects/Animal Welfare IssuesScalpels are sharp and should be used with caution. The glassware involved in the experimentation may lead to injuries if used without caution and broken. Use of liquids may also lead to some risks if spilled because the floor may become slippery. The lab did not lead to any animal welfare issues.VII. Method 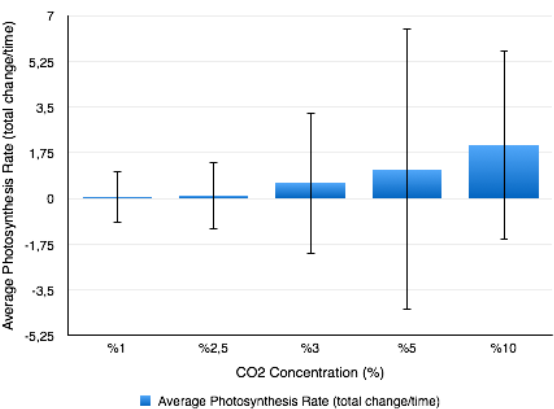 Conclusion and EvaluationEvaluationThe collection of data was an easy process. My results match my predictions. But the uncertainties in the data, which I sh.ould have considered before processing the experiment, are preventing me from making clear and strong statements. One uncertainty preventing me from making clear statements derived from this lab is the fact that I ran the trials for 20 minutes only. It was unfortunately not possible to see any changes in such a short time with low concentrations such as 1% CO2 . If I had run the experiments for longer, I could have seen the photosynthesis rate reaching it’s limit and becoming constant, but because I ran it for a short time, I am not able to understand if, for example 0,3 mm/minutes is the maximum photosynthesis rate the plant Elodea can reach in 10% CO2 concentration. I needed to do it for a longer time to say it has reached a limit or not.Second thing I should have considered is the fact that although they belong to the same species, the plants used in the experiment were still not the same in terms of leaf sizes. If I could use the exact same plant in each tube (take Elodea from one tube and place it in other), results might have changed because plants might be doing photosynthesis at different rates. This is also something I should have searched before starting the experiment, while doing my background research so that I could be sure about it.If I was doing the same experiment again, I would avoid these uncertainties and that would help me make clear statements about my results saying that they match every prediction I made and are strong justifications. Right now, they still match some of my predictions. For example, the photosynthesis rate in 10% CO2 was 0.3 mm/minute while it was 0.2 mm/minute in 5% CO2. This shows that the rate of photosynthesis is greater when higher concentrations of CO2 are present. But like I have stated above, this can be caused by other factors such as the difference in plants or anything I have not considered. Therefore, I should have run more trials.ConclusionMy aim was to see the effects of CO2 concentration on photosynthesis and although I was not able to see them, I was able to make predictions about the effects. I have listed everything that has caused uncertainties in the experiment, and these uncertainties are unfortunately preventing me from making clear statements. If I could do this again, I would avoid all of these uncertainties. The results meet my predictions but one should not say that these results are clear and direct justifications of the background research. Some other factors were involved in the experiment, therefore I would not consider this experiment as successful, and I would do it again.BibliographyAlott, Andrew and David Mindorff. IB Biology Course Book 2014 edition: Oxford IB Diploma Programme. Oxford University Press, 2014.Lagassé, Paul, ed. Columbia Electronic Encyclopedia. 6th Edition. New York: Columbia University Press, 2013.McGinley, Mark. Differences between aquatic and terrestrial environments . 5 February 2009. 1 March 2015 <http://www.eoearth.org/view/article/151726/>.Rose, Francis and Clare Reilly. The Wild Flower Key: How to identify wild plants, trees and shrubs in Britain and Ireland. London: Frederick Warne, 2006.