Homeostasis is a term translated from the words Homeo meaning ‘’same’’ and stasis meaning ‘‘standing still’’. This term simply describe a dynamic state of equilibrium and the ability of the body to maintain a stable internal condition with a changing outside environment. This process is used to maintain and regulate body temperature, blood sugar level, blood pressure, endocrine system, excretory system and by counteracting the effect of any abnormal level of these factors. Three main components are responsible for the equilibrium process. The receptor which receives information, control centre, receives input from the receptor and the effector, adjusts the factor to a desirable response.

In hot conditions, temperature, the sweat gland produces sweat, this cools the body as it evaporates. The skin dilates (vasodilation) allowing blood to flow through the skin capillaries therefore increasing energy loss. The hair on the skin flattens. Also in cold condition, the body responds by causing muscles to constrict (causing shivering) the capillaries of the skin constrict (vasoconstriction) restricting the blood flow through the skin. The hair on the skin stands up to trap more warm hair. The mechanism is show in Figure 1 below. 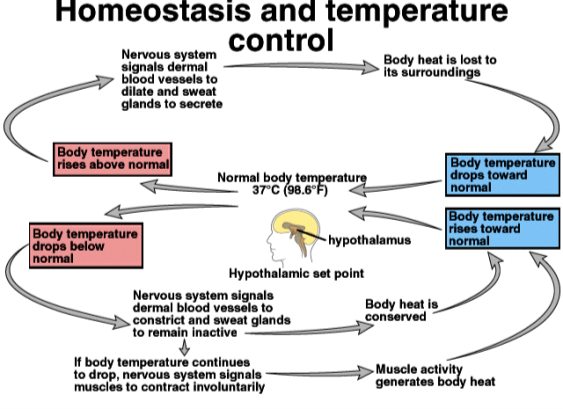 Water makes up almost the entire volume of fluid in the body. Its regulation is crucial for survival. Apart from water, salt is a functional component of body fluid that is important to the overall body homeostasis. Water is gained from food, drink and respiration and it’s lost through sweating, excretion of urine and faeces. Therefore there is a requirement for our body to maintain balance between water intake and water loss. This is done by the actions of the kidney and highly sensitive cells in the hypothalamus (osmoreceptors).

During exercise, a fall in the level of water in the blood gets detected by the processing centre (hypothalamus) which stimulates the pituitary glands to release antidiuretic hormone (ADH). ADH travels to the kidney through the blood to prompt the reabsorption of water from the kidney into the blood before it is excreted as urine, which is usually in concentrated form.

On the other hand, when the level of water in the blood rises the hypothalamus detects this change consequently, sends a message to the pituitary gland to stop the release ADH into the blood thus preventing reabsorption of water from the kidney. This results to passing out of large volume of diluted urine.

The process of maintaining water level follows a negative feedback system where by as the level of blood water drops, the system ensures that ADH is released and vice versa. The importance of this process is the prevention of oedema or possible circulation system shutdown as a result of unregulated excessive blood water level.

The human body requires that the level of blood glucose be maintained and kept constant, the endocrine system such as the pancreas produce and release hormone into the blood stream which homostatically maintain internal environment of the body.

In the presence of insulin the level of glucose in the blood normally range from 80-120mg/100ml of blood and can rise up to 600mg/100ml of blood (Marieb, 2012). The pancreas is responsible for the secretion of insulin and glucagon for the regulation of blood sugar level. It is located in the abdominal cavity. The islets of langahans are cells of the pancreas that are responsible for producing hormones that maintain blood sugar levels. They are the alpha (α), beta (β) cells and delta (δ) cells. The alpha cells secrets glucagon which raises the blood glucose level in the blood, the beta cells secrets insulin which lowers the blood glucose level, the delta cells secrets somatostatin which regulates the alpha and the beta cells.

After a meal, the level of blood glucose increases. This stimulates the pancreas thus triggering the β- cell of the islet to release insulin into the bloodstream. This action enables glucose to be absorbed by the body cell (target cells). This is further oxidized froe Adensine-Triphosphate (ATP) energy production (Glycolysis). Excess glucose is stored in the liver where glucose is converted to glycogen (Glycogenesis) or fat. This consequently reduces the level of glucose in the blood as a result of the increased consumption of glucose by the cells for energy. It is important for this level to be brought from high to normal in order to prevent a medical condition called hyperglycaemia.

After several hours of eating a meal or being in an activity, the glucose level in the blood falls. This stimulates the pancreas thus triggering the α- cells of the islet to release glucagon into the liver. The glucagon acts as an antagonist to insulin; it helps to regulate blood glucose level but in a way opposite that of insulin. (Marieb, 2012).

The glucagon stimulates the breakdown of the stored glycogen to glucose (Glycogenolysis) which is then released into the bloodstream to compensate for the fall in blood glucose level.

This process of blood glucose regulation works under the control of the negative feedback mechanism by lowering a deviation from normal value. For example, low blood glucose result to the production of glycogen also a rise in blood glucose shuts down the stimulation of glucagon production. 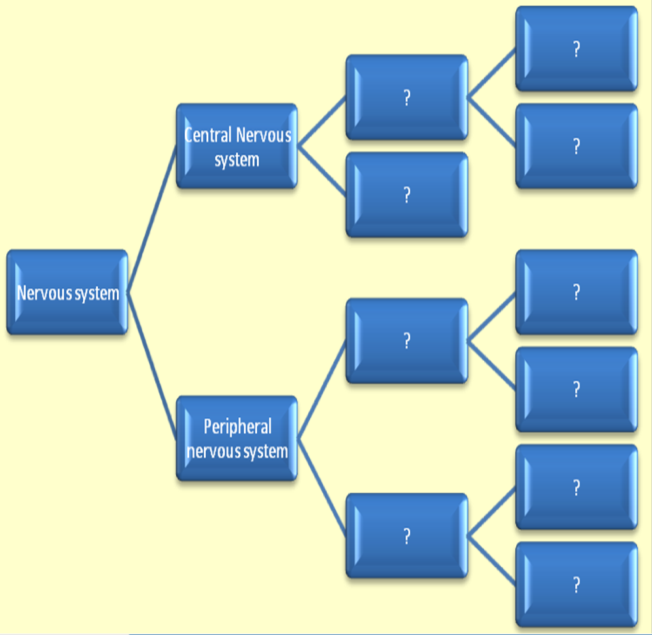 The central nervous system comprises the brain and the spinal cord. The brain is divided into the forebrain, (cerebrum), mid-brain (hypothalamus) and the hind-brain (cerebellum). Its primary function is to receive impulse from the sensory organ and co-ordination of different body activities. The spinal cord extends from the brain to the tail of the vertebra column conveying nervous impulse. Its function is to transfer transmit impulse to the brain and t act as a reflex centre.

The endocrine and nervous system do share certain similarities with some existing differences in their control mechanisms. The similarities between the two systems include, playing part in the maintenance of the internal environment of the body (Homeostasis), as well as providing the body with a means to communicate with the internal and external environment for response co-ordination. For example, both systems use chemicals to transmit messages (chemical neurotransmitters and chemical messengers). Also for both systems the release of chemical are due to stimulation.

However, the main differences between the two systems are as follows; in endocrine system, the route of transmission is via the blood stream to the target organ. Its effect is widespread as a single hormone may act on many organs far away from each other. It produces a slow response to stimuli because the hormone reaches its destination in the speed at which blood flow through the vessels. Its secretive action goes for a long duration example of which are found in growth and development.

In the other hand, in nervous system, the route of transmission is through neurones along nerve fibres, its effect is localized and it response to stimuli is usually rapid usually in milliseconds and in short term as noticed in the contraction of muscle in a reflect action.

The removal of waste is part of an organism’s life. The excretory system is the system in the body that is responsible for carrying out this action. It performs function such as maintenance of fluid volume, osmotic concentration of extracellular fluid and excretion of toxic by-product such as urea, ammonia, and uric acid. The organs of the excretory system include the liver, lungs, skin and the urinary system which includes the kidneys, ureter, bladder and urethra.

The liver is situated on the right side of the upper part of the abdomen, beneath the diaphragm. It is the known as chemical factory of the body because of the reactions that takes place within it. Some functions of the liver include the metabolism and storage of carbohydrate and lipids, the ingestion and destruction of foreign matter and worn out blood cell. A gall-bladder embedded in the right lobe stores bile emulsifies fats into useable fat and acidic waste into harmless substance.

The lungs help to maintain blood-gas homeostasis by eliminating CO2 produced by the body while the skin helps excrete water and salt as well as small amount of urea and lactic acid. Blood carrying urea is later transported from the liver to the kidney by the renal artery.

The kidneys are reddish brown bean-shaped organs, located between the rib-cage on either side of the vertebral column. The functions of kidneys include; excretion of urea, elimination of toxins and drugs, regulating the amount of hydrogen ions in the blood, maintenance of blood pressure etc. Other specialised units (Figure 3(C)) which enhance its excretory functionalities enable Blood containing urea to passes through the cup-shaped Bowman’s capsule containing the glomerulus where filtration occurs. The filtered fluid containing, water, glucose and salt are re-absorbed in the tubules. The remaining fluid containing urea, water and salt passes through the collecting ducts into the bladder through the ureter where it is stored for excretion. See below, the structures showing the main component of the excretory system.

Figure 2: Structure of the liver 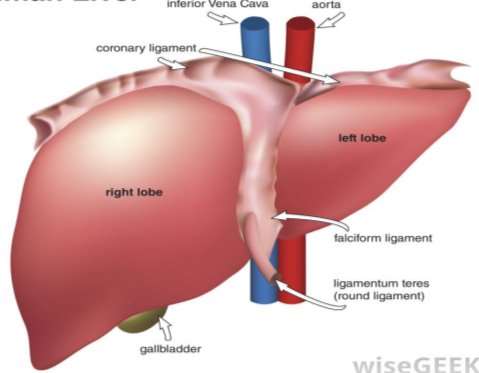 Figure 3: Structure of the kidney and the nephron 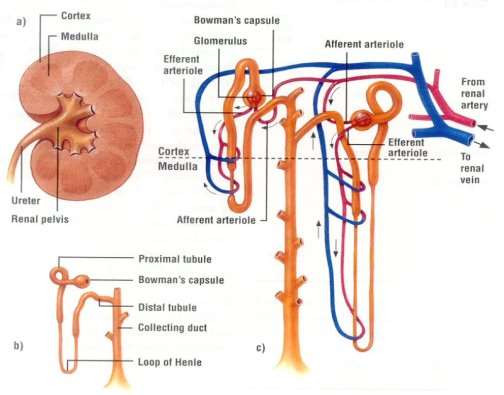