What is homeostasis? (96 words)

Homeostasis is the process of maintaining internal equilibrium, regardless of external influences. Every internal process has a desirable environment, known as the norm, at which operations are carried out most effectively e.g. maintaining a temperature a constant core body temperature. Any deviation from the norm will be automatically corrected, this process is known as negative feedback e.g. a rise in blood pressure leads to a slow in heart rate. Each major organ within the body, plays a part in maintaining homeostasis e.g. the endocrine system excretes hormones rate regulate the level of glucose in the blood. (Biologyonline 2009)

Part 1- How is body temperature maintained including why this is necessary for the organism? (301 words)

When proteins are too far away from their optimum temperature they cease function. To combat this homeostasis uses a number of different functions to regulate temperature. Heat is sensed by thermo-regulators within the skin and the hypothalamus. Messages received from external thermo-regulators are sent to the cerebellum and then on to the hypothalamus. The role of the cerebellum is to activate voluntary behavioural responses, so that we make adaptations to change our body temperature e.g. taking off a layer of clothing if we are too hot or putting on a coat if we are too cold. However, this may not be enough for the body to become the right temperature, so internal steps must be used to compliment this process.

If the temperature gets to low we can develop hypothermia and eventually cells will freeze. To combat this vasoconstriction occurs at the skins capillaries, reducing the flow of cool blood back from the skin. This can be combined with shivering, as it forces the muscles to generate heat; heat is involuntarily produced as a waste product. The skins’ hairs becoming erect, which traps air between the hairs, this is done by the contraction of erector pili. As well as an increase in the metabolic rate of the body.

If the body gets too hot, vasodilation occurs at the capillaries near the skin; this increases the flow of warm blood to allow the outside temperature to cool it down, so that it is cooler when it heads back to the core. Alongside this, to cool the body down, sweating can also occur. The evaporation process draws heat away from the body via the skin. Erector pili relax, allowing heat out of the body more easily and the bodies’ metabolic rate reduces. If we remain too warm, the body will start to dehydrate. (Biologyonline 2009)

Part 2- Water is important for homeostasis, how are water levels maintained within the body and why is it important to do so? (298 words)

Water necessary in the distribution of nutrients and oxygen around the body, it also carries away waste products. Water primarily enters the body through ingested liquids, however, some is through food sources and some is from metabolic processes. The output of water should be the same as the input, when we require water, the brain sends a message to the thirst reflex, which stimulates us to voluntarily drink. This reflex is stimulated in a number of ways; the level of saliva drops, there is an increase in the osmotic pressure which leads to stimulation of the hypothalamus via osmoreceptors and blood volume drops which also stimulates the hypothalamus. Water is stored in the body in two ways; intracellular fluid is the liquid found within a cell and extracellular fluid, which relates to the fluid found outside of the cell. Through the process of osmoregulation, water can pass through the semi-permeable cell membrane, to the area of highest concentration. The body also uses Active transport, to allow the liver to keep hold of important substances, such as glucose and ions.

If the solution outside of the cell becomes hypertonic, water will leave the cell. In the case of red blood cells, this can cause the cell to shrink and lose its hope, rendering it no longer able to carry oxygen around the body.

Part 3- Insulin and Glucagon are homeostatic hormones, how is this the case and why are they necessary? (400 words)

Blood glucose levels are vital to the effective functioning of a cell and is a source of immediate energy. It enters the body through external functions and is then regulated by internal ones. Through a negative feedback system, Insulin and Glucagon are released in to the blood according to the levels of glucose.

The endocrine system, helps to control and coordinate bodily functions, by using hormones, in an attempt to maintain homeostasis. It is made up of 9 major glands spread throughout the body. Insulin and glucagon are secreted by the endocrine pancreas, they are essential components in regulating blood glucose levels within a set range.

Whilst a low level of insulin is always secreted, after food sources are ingested, the levels of insulin within the blood increase, to combat the rise in blood sugar. In response to these increased levels of insulin; cells take the glucose from the blood, cells are more effective in using glucose as an energy source, it speeds up the formation of glycogen and it stimulates fat synthesis. All of these actions help to bring glucose levels back down to the desired levels.

Glucagon is secreted only in to the blood stream when blood glucose levels are low, this normally occurs between meals and during exercise. It essentially causes; the liver to release its stored glucose in to the blood, an increase in the breakdown of fats to fatty acids for use as energy and it stimulates glucose synthesis in the liver. All of these actions help to bring glucose levels back up to the desired levels.

If the systems fail to regulate themselves, the body can develop one of two types of Diabetes. Type 1 is a disease where the immune system attacks and destroys the pancreatic cells that produce insulin. Without insulin, glucose levels will remain dangerously high; this glucose will be lost in urine, as well as a high amount of water, which will eventually lead to dehydration, over long periods of time damage may be caused to; nerves, body tissue, kidneys and the cardiovascular system. People with Type 2 Diabetes have persistent hyperglycaemia, this is due to cells being insulin resistant. This reduced sensitivity stops the body from realising that it doesn’t need any more glucose. (Biology Reference 2001) 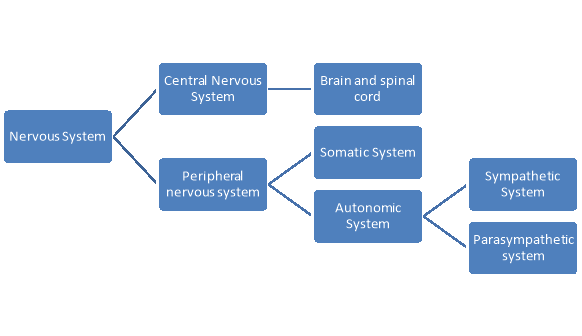 Part 2- For each of the subdivisions you have labelled above, explain their functions within the nervous system and in the case of certain answers their relationship to each other. (193 words)

The brain is made up by a number of important areas. Each of these areas control different systems within the body e.g. the visual cortex deal with vision and the cerebellum control voluntary movement. The main route for the brain to send messages to the peripheral nervous system is through the spinal cord. The peripheral nervous system is made of up two main systems; the Somatic system and the autonomic system.

The somatic system is involved in voluntary actions, such as lifting things up. Impulses are sent to whichever muscle and set of nerves is required for the chosen movement. It is controlled by the cerebellum.

This Autonomic System mainly deals with control systems. It is a self-regulating system that brings around change through neural stimulation or by releasing hormones from the endocrine glands. This is controlled in the brain by the Hypothalamus. The ANS is made up of two systems; the sympathetic system which is involved in the involuntary adjustments the body has to make in reaction to danger or its need for an increase in energy and the parasympathetic system is involved in building up the bodies’ resources for dangerous times. (Biology Guide n.d.)

Discuss the similarities between the endocrine system and the nervous system as well as the differences. (191 words)

Explain the relationship between structure and function of the excretory system and what structures do they have to carry out this role, use annotated diagrams as part of your answer. (305 words) 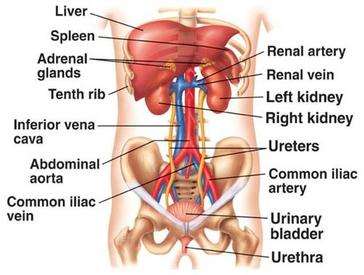 The function of the excretory system is to remove waste from the body. There are a number of specialised organs that assist this process with the help of connecting networks.

The liver essentially breaks gown toxic chemicals and poisons that enter the body. When protein is metabolised to produce ATP, it produces a by-product called ammonia, which is toxic to the body. To combat this, the liver turns ammonia in to urea, which is a less toxic chemical. Urea is then transported via the bloodstream to the kidneys where it can be expelled. When we eat, the liver releases bile in to the intestines, to break down the food products in to unusable waste and fat. The intestines absorb these by-products in to the blood stream and what is transported back in to the liver. The liver then removes these waste products and passes them on to the kidneys.

Blood enters the kidneys through the renal arteries, to be filtered by nephrons. The structure is broken up in to; the Bowman’s capsule, the proximal tubule, the loop of Henle, the distal tubule and the collecting duct.