The people have different behaviour to choose the food, and there are many factors that affect the food choices. The best significant factor to choose the food is taste. Differences in taste perception of several taste modalities are associated to difference in the taste receptors. Polymorphisms of the genes that encoding these taste receptors may clarify these unpredictability in taste perception. Individual changes in the capability to identify bitter tasting compounds, such as phenylthiocarbamide (PTC) was a well-known example of this variability. This difference divided the people in two groups: tasters and non-tasters, and is because of in part to single nucleotide polymorphisms (SNP) of a bitter taste receptor gene, taste receptor, type 2 (TAS2R) 38. The experiment was designed to determine the PTC phenotype and genotype, the SNP at position 785 is of particular importance in genotyping. DNA was extracted from check cell by using Chelex technique and genotyped by using polymerase chain reaction (PCR) followed by restriction fragments length polymorphism (PCR-RFLP). A 2% of Agarose gel electrophoresed and stained with Ethidium Bromide to imagine the genotype pattern. The class was tasted PTC test paper to compare phenotype and genotype. The total was 108 students the genotype showed 21 taster (+/+), 51 was mild taster (+/-) and 36 was nontaster (-/-). The allele frequency was not statistically significantly differ from European population. Therefore, TAS2R38 genotype is a truer estimation of the extent of the influence of this single gene on taste perception of PTC in a genetically diverse population.

The TAS2R38 gene is one of the most studied from over twenty-five in bitter taste receptor gene (4).The TAS2R38 gene is responsible for the taste perception of PTC as more bitter and the other related compounds like 6-n-propylthiouracil (PROP) which both contain a group of thiourea (7.8). The variation in the gene TAS2R38 divided the individuals in two groups of thiourea tasters: tasters and non-tasters (4, 5).

The variation in the taste perception of PTC rely on the genetic studies. In 1930s, difference in the ability to taste PTC was first finding by Arthur L. Fox in a laboratory accidental (6). When he was working in the laboratory and transferring PTC powder into a bottle. Some particles of PTC powder flew into the air and his colleague close to him C. R. Noller tasted the particles as bitter but Fox tasted nothing. Fox was make experiment to test a large number of individuals and he found the difference in their ability to taste PTC and he divided the people in two main groups’ tasters and non-tasters (1). Worldwide about 25% of population classified as ‘non-tasters’ and the remaining 75% as ‘tasters’ (1). In addition, Bartoshuk et al, in 1992, discovered that the ‘tasters’ varied in the perception of PTC/PROP in a bi-modal fashion, and they separated them into medium tasters and supertasters. The supertasters were very sensitive to PTC, perceiving them as more bitter, while the medium tasters may taste PTC and found it mild bitter. Besides, the spread of super, medium and non-tasters in the general population is roughly 25%, 50% and 25%, respectively (1). The PTC sensitivity believed to be inherited as a simple Mendelian trait with two alleles a dominant trait (T) for taster and recessive trait (t) for non-taster (9). 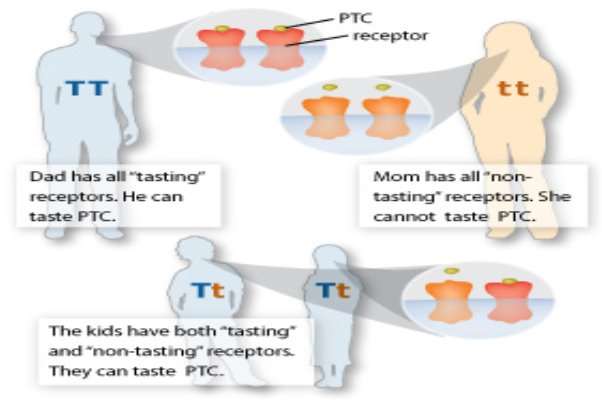 TAS2R38 or PTC gene is located on chromosome 7q and consists of a single coding exon 1002 bp long, encoding 333 amino acids, 7-transmembrane domain G-protein-coupled receptor (2, 6). A number of SNPs have been identified within this gene, the three most common SNPs (>1% of the population has variants at a specific DNA sequence, considered an SNP and <1% considered as mutation) change at 3 amino acids positions: 49, 262, and 296 forming numerous haplotypes. PAV (proline49, alanine262 & valine296) taster form and AVI (alanine49, valine262 & isoleucin296) non-taster form are the two most common (4).Also, the PAV/PAV homozygotes are sensitive to PTC more than PAV/AVI heterozygotes while AVI/AVI homozygotes are fewer sensitive (4). The AVI haplotypes in the non-tester differ at 3 SNPs from the PAV haplotypes of the tasters (9).

The aim of this practical:

To focus on the TAS2R38 genotype and its link with the ability to taste PTC test paper. The SNP at position 785 is of specific concern in genotyping. Comparing the allele frequency detected in the class with those observed in European population subject in group 226 and Sub-Saharan African subject in group 224.

To determine the TAS2R38 (A262V) genotype by using the polymerase chain reaction (PCR) and restriction endonuclease digestion, Fnu4H1 enzyme. The procedure that has been done was as the following:

Protocol of DNA Extraction from Cheek Cell (scrape or wash):

First week take a 10 ml of water pour into mouth and swirl to release buccal cells and spit back contents into tube. Centrifuge the tube at 3000rpm for 3 minutes, carefully pour off supernatant and retain cell pellet. Added 350µl of 5% Chelex mix and then transfer the pelleted buccal cells to new (1.5ml) Eppendorf tube. The 5% Chelex to protects DNA breakdown under a high temperature. Added 4µl of proteinase K to the Eppendorf tube that contains buccal cells and 5% Chelex. Incubated the tube containing chelex/cells at 56°C for 30 minutes in the heating block, then briefly vortex the tube for 10 seconds after that centrifuge the tube at 3000rpm for 20 seconds. Incubated the tube ( chelex/cells) again in heating block at 98°C for 15 minutes, then vortex the tube for 10 seconds, after that centrifuge for 3minutes.Transferred the supernatant that above the chelex containing the buccal cell (DNA template) into the sterile 1.5ml Eppendorf tube and measured the DNA concentration by take 1µl of DNA into machine called nanodrop nucleic acid then kept at -20°C to preserve the DNA.

Second week take a 43.5µl of master mix was already prepared in the PCR tube and transferred 6.5µl of DNA extraction. (Buccal cell DNA).Vortex and spin the tube to make the liquid contents to bottom of the tube. The total PCR tube reaction volume contain 50µl of mixtures were placed in the PCR machine and the thermal cycler conditions were: cycle of 94°C for 4 minutes. The 40 cycles of 55°C for 40 seconds, 72°C for 40 seconds and 94°C for 40 seconds .Then 1 cycle of 55°C for 5 minutes and at 72°C for 5 minutes.

The sequence of Forward primer was 5’ AACTGGCAGAATAAAGATCTCAATTTAT3’

The sequence of the Reverse primer was 5’ AACACAAACCATCACCCCTATTTT 3’.

Last week transferred a 20 μl of the component mixture (PCR product) to a tube containing 10μl of the restriction endonuclease master. The tube was placed in into a 37°C heating block for two hours.

A 30ml of 2% Agarose gel with 0.5µl/ml of ethidium bromide was loaded into the gel tank with adjusting the comb, the gel was kept 15 minutes to get stuck. After that the TBE buffer was loaded, covering the surface of the gel and the comb was removed. Take 12µl of PCR product undigested and digested into two different tubes added 3µl of DNA loading buffer mix and spin. Then, 10μl of PCR product/loading buffer was loaded into the well of 2% Agarose gel and 10μl of the ladder (100bp) was added in the last well. The gel electrophoresed at 90 volt for 45minutes, negatively charged (-ve) DNA moved toward the anode side (red). Last take gel photograph under UV trans-illumination.

The PTC taste test paper was used to observe the capability to identify the bitterness of PTC and its relative with the TAS2R38 genotype.

The data of the allele frequency for C785 and T785 observed in the class was compared to the allele frequency of European population subjects in group 226 and Sub-Saharan African subject in group 224 by using the Chi square test. The Chi square test was also used to investigate the association between the TAS2R38 genotype and phenotype. All statistical analyses were performed with Minitab data analysis software.