The amazing ability of various blind or deep-sea fish to navigate through waters, where little or no light penetrates can be attributed to the presence of a sensory system found in fish and amphibia, which is responsible for spatial navigation, balance and even social behaviours like schooling and mate selection- the lateral line.

The lateral line system, present in fish and amphibians, is a mechanosensory system that detects water flow and current. It located on the flanks of the fish (lateral sides), hence the appropriate name for the system. There are two main types of lateral line:

The lateral line itself is formed of tiny clusters of cells called neuromasts. Each neuromast houses about 20 or so cells which function as mechanoreceptors. The neuromasts are the functional units of the lateral line.

Neuromasts sense mechanical current pressure and transduce these impulses into sensory information which is then passed to the sensory (afferent) neurons just underneath the neuromast surface and innervating it. The size and shape of the lateral line varies between different species of fish.

The lateral line system is an extremely essential sensory system, playing a vital role in schooling behaviour, location of prey, escaping from predators, especially balance and navigation. In many fish, like elasmobranchs, Gymnotiformes, etc, the lateral line mechanoreceptors are modified to act as electroreceptors called the ampullae of Lorenzini. 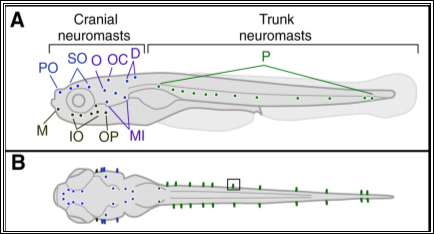 ANATOMY OF THE NEUROMAST

The lateral line neuromasts differ in patterning in various species, but the fundamental structure of the neuromast is the same across species. 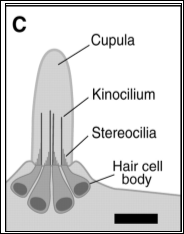 Neuromasts consist of modified epithelial cells, which show structural and functional similarity to the hair cells found in higher organisms (reptiles, birds and mammals) in the auditory and vestibular systems. There are 2 main types of neuromasts:

Each neuromast is arranged in a rosette-formation. The hair cells of the neuromasts are extremely similar in structure and function to the hair cells found in the inner-ear of terrestrial vertebrates. They possess a long kinocilium (sensory cell) and many supporting cells (stereocillia), which function as the receptors of sensory impulses.

This group of hair cells is covered by a protective and flexible layer of cupula above. The hair cell bodies lie within the epithelial tissue. (Fig C). These hair cells are modified epithelial cells, which contain 40-50 bundles of microvilli that act as mechanoreceptors. These bundles are arranged in increasing orders of length, hence taking a ‘staircase’-like appearance.

They possess innervations from both, afferent and efferent neurons. As and when a stimulus (like a mechanical force or vibration) is received, the hair cells transduce these stimuli via rate coding. The cells will produce a constant firing for as long as the stimulus is in fuelling the receptors.

During mechanical or vibrational stimulation, the pressure causes the cupula to bend in the direction of the pressure. The intensity with which the cupula bends will depend on the magnitude of the water pressure or mechanical force being exerted around the fish. As the hairs in the neuromasts bend due to the force, there will be a change in the ionic permeability of the cells. It is seen that if the deflection of the hairs is towards the longer hair, the hair cells will be depolarized, causing a net excitatory impulse by causing a depolarization and the release of neurotransmitters as the impulse moves up afferent lateral neurons. Deflection towards the shorter hairs causes hyperpolarization, and the effect seen is completely opposite, (Flock, A. (1967)).

Both, superficial and canal neuromasts use this method of electrical signal transduction. However, the difference between their organization on the epidermis provides them with differential capacities related to mechanoreception.

Since the superficial neuromasts are located more outwardly, they come in direct contact with the external environment of the fish. Superficial neuromasts have the same basic ‘staircase’ hair cell organization. But by and large, the organization of the said hair cells is random and disorganised, wherein in there is no accurate gradient as such of microvilli by length or size.

This might hint at the superficial neuromasts’ ability to have a broad detection range (Peach, M. B., & Rouse, G. W. (2000)), to detect a wide array of mechanical deflections.

Conversely, canal neuromasts allow for a more refined mechanoreception like detecting pressure gradients instead of just detecting the presence or absence of mechanical or pressure perturbances (Peach, M. B., & Rouse, G. W. (2000)).

FUNCTIONS AND ROLE OF THE LATERAL LINE

Coombs, S., Braun, C. B., & Donovan, B. (2001) established the role of the lateral line, particularly in predator fish. Predatory fish (mottled sculpin) would orient themselves towards a source causing vibrations or disturbances in the water. They observed that these vibrations were picked up by the fish and it would then orient itself according to the directional flow before trying to capture the prey. The fish showed the same behaviour even when the vibrations were made to be produced by a metal sphere instead of the prey, or if the fish were blinded. To confirm these results, they inhibited signal transduction from the fish’s lateral lines by treating them with CoCl2, which is known to disrupt ionic transport, and the fish showed a weakened response to the same stimulus given to them.

Furthermore, they used gentamicin to disrupt the canal receptors and mechanical scraping of the neuromasts of the lateral line to check whether both the lines were used equally for orienting to prey. They found that the disruption to canal neuromasts affected the fish’s predatory behaviour the most. On the other hand, superficial neuromasts are more responsible for rheotactic behaviour.

The lateral line neuromasts transduce mechanosensory inputs to into neuronal impulses, which are then carried to the CNS via afferent nerve fibres at the basal surface underlying the neuromasts, particularly the cerebellum, brainstem along with the forebrain and midbrain, where this sensory input is decoded, analysed and integrated with inputs coming from other sensory systems of the fish to create a visuospatial map of the surroundings, thereby eliciting appropriate responses to the said stimuli (Mogdans and Bleckmann, 2012). Neuromasts usually have an operating range of less than 1Hz to 150 Hz for sensing hydrodynamic stimuli (Bleckmann H., 2008).

To completely understand perception in the lateral line, it is essential to understand the effect of hydrodynamic noise and its filtering in the in lateral line system. An aquatic environment subjects fish to various periods of bulk water flows (especially when the environment is a constant freshwater stream or river-run). Dynamic ocean currents also provide a lot of background noise which the fish needs to filter out so as to set a basal level of electromagnetic influx for navigation or prey detection. Bulk water flow contains a large moving direct current (DC) and irregular fluctuations in the flow which overlay the DC flow. It is seen that during exposure to unidirectional bulk flow, the flow sensitive lateral line afferents show a significant enhancement in activity, which (as seen in goldfish) takes place irrespective of the direction of the flow. It is therefore suggested that the afferents only respond to the flow-fluctuations, as opposed to the DC component of the bulk flow.

Flow fluctuations will be cross related with the mean flow. Thus, the fish can establish correlation using the velocity and direction of singular flow disturbances as and when they move along the surface of the fish. Thus, the fish can calculate gross flow and direction to set up a basal quantity to use it to detect singular fluctuations and thereby filtering a large portion of the DC flow (Bleckmann et. al., 2009).

The Ampullae Of Lorenzini

In addition to mechanosensory neuromasts, various fish species such as sharks, rays, catfishes, lungfishes and so on, have electroreceptive cells which are variants of the lateral line system itself, call the ampullae of Lorenzini. These cells detect electrical discharges in water and are used by the fish for prey-location, movement and electrocommunication.

An example of this is the location of prey by sharks and the jamming avoidance response by South American knifefish (Eigenmannia). Sharks especially use the ampullae of Lorenzini to gauge electromagnetic fields, which can help them detect and pin down prey. Paddlefish can detect low electric fields upto 20Hz using electroreceptors located on their rostrums. Usually, large congregations of plankton (which are the paddlefish’s dietary constituent), are able to generate such frequencies. All living organisms produce some quantity of electrical discharge, and elasmobranchs are particularly adept in detecting these discharges.

Slight variations in the normal electric field surrounding the fish can be picked up by the ampullae and used to orient the fish (particularly well observed in hammerhead sharks), giving sharks the highest level of electroreceptive sensitivity as compared to any other animal. They possess an added advantage of being able to orient themselves with respect to the electromagnetic fields created by ocean currents in the earth’s magnetic field and use them for navigation purposes (Meyer et. al,2005).

EVOLUTION OF THE LATERAL LINE

The lateral line neuromasts arise from a post-otic placode, situated posterior to the inner-ear of the fish. And the hair cells in the neuromasts show structural and functional similarity to those found in the inner ear in terrestrial organisms. Throughout the vertebrate world, the morphology and cell types found in the auditory and vestibular system seem to remain consistent. This suggests an evolutionary relationship between the lateral line system in fish and vestibular and cochlear system in higher terrestrial animals. Apart from the fact that they are similar in structure and function, the origin and development of the hair cells in these mechanosensory neuromasts to the inner ear of terrestrial animals also possess similarity.

As organisms evolved from being aquatic to living in terrestrial environments, their sensory systems also underwent modifications to optimize their sensory perception in their new environment. It is suggested that the lateral line neuromasts are the evolutionary precursors of the inner ear. The aquatic environment carries sound faster and farther (1,484 m/s, about 4.3 times faster than in air) than its arid counterpart (344 m/s). As the transfer of sound frequency wouldn’t be efficient from air to solid, a better system was required. The terrestrial ear evolved in 2 ways:

The evolution of these structures aided in the transmission and conduction of sound waves from air to the inner ear containing the hair cells.