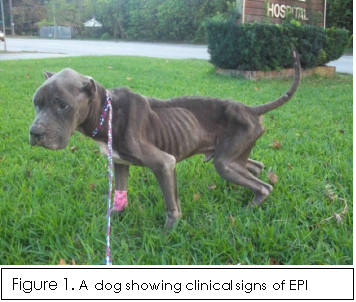 The pancreas performs both exocrine (secretes into a duct) and endocrine (secretes directly into the blood) functions, that are vital for correct metabolic function. One such role, is the secretion of digestive enzymes by pancreatic acinar cells, essential for the breakdown of nutrients in the small intestine.

Exocrine pancreatic insufficiency (EPI) is a degenerative disease caused by the insufficient production and secretion of pancreatic digestive enzymes; this leads to maldigestion (an inability to breakdown nutrients) in the duodenum and if untreated, ultimately death through starvation, regardless of how much the dog may seem to be eating (Foster, 2017).

EPI is often accompanied by a secondary condition, known as Small Intestinal Bacterial Overgrowth (SIBO). Due to the nature of EPI, bacteria take advantage of the undigested food in the intestine, which often leads to many of the same symptoms as EPI, especially bowel discomfort and flatulence (GlobalSpan, 2013).

Cobalamin (Vitamin B12) deficiency, is another secondary condition that more than 80% of dogs with EPI have (Steiner, 2011). This is because cobalamin requires intrinsic factor (IF), produced by the pancreas, for protection and absorption from the small intestine (SI). In addition to low IF levels, SIBO can also lead to reduced cobalamin uptake, as the bacteria bind it and prevent uptake from the SI (PetMD, 2017). Cobalamin deficiency can prevent weight gain and even has neurological side effects, which may affect the animal’s behaviour (Steiner, 2012). 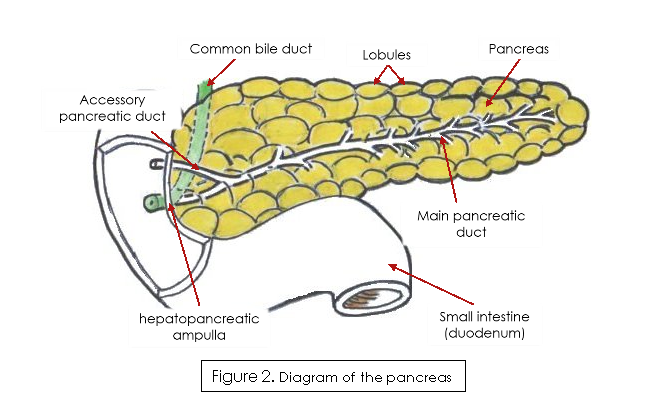 The pancreas is an elongated gland, located close to the small intestine, with the pancreatic duct emptying into the duodenum at the hepatopancreatic ampulla (Figure 2) (Ross & Pawlina, 2015).

The pancreas is split into exocrine acini and the endocrine Islets of Langerhans, these are interspersed around the acini. The functional exocrine portions of the pancreas look similar to a ‘grape vine’ and are made up of three types of epithelial cell, acinar, centroacinar and duct cells, as shown in figure 3 (Yuen & Díaz, 2014). The acinar cells produce inactive digestive enzymes (see table on page 5 for key zymogens produced), as well as store them within zymogen granules (figure 3.) ready for secretion into the acini lumen (Ross & Pawlina, 2015). Once secreted, duct cells transport the zymogens along with their own bicarbonate secretions to the duodenum, where they will be activated and then proceed to digest and breakdown the chyme into absorbable nutrients. 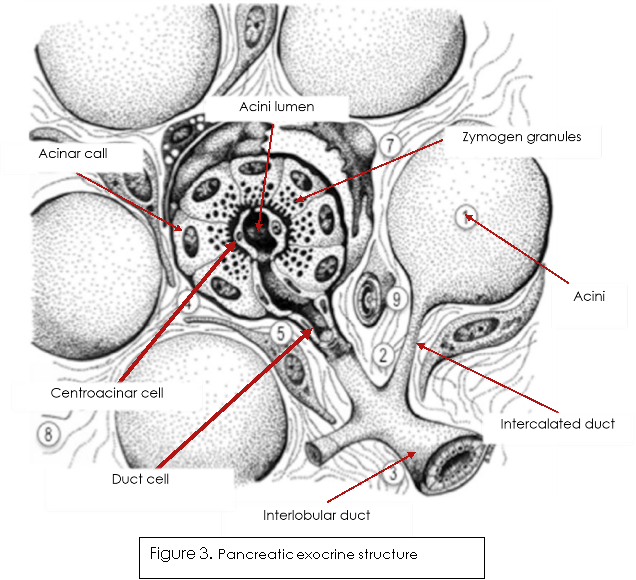 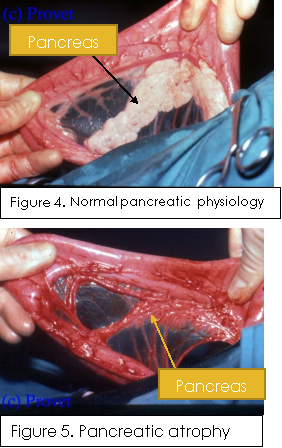 Any physiological change that prevents pancreatic enzymes from reaching the duodenum can lead to EPI. This includes potential damage to the enteroendocrine cells of the duodenum (which secretes cholecystokinin (CCK), essential for stimulating pancreatic enzyme secretion (Gartner & Hiatt, 2005)) or an obstructed pancreatic duct, due to cancer (Parambeth & Steiner, 2011). However, the most common physiological change that causes EPI is the loss of the pancreatic acinar tissue. This typically comes about in one of two ways, pancreatic acinar atrophy (PAA) or chronic pancreatitis, although the exact pathogenesis of either is still unknown (Steiner, 2017).

PAA is the selective destruction of the acinar cells and is thought to be caused by an auto-immune response (Morgan, 2009). This is supported by pancreatic biopsy analysis, which show a high prevalence of intra-acinar T lymphocytes in affected dogs, however there is still a lack of evidence to fully support or explain the exact cause (Morgan, 2009). PAA is the cause for approximately 50% of all EPI cases and appears to be a hereditary disease that occurs most commonly in German shepherds, rough-coated collies, and Eurasians (Westermarck, 2012). Originally thought to be passed on by an autosomal recessive allele (Clark, et al., 2005), new research points towards it being a polygenic disorder with possible environmental factors (Clark & Cox, 2012). Dogs affected by PAA are typically young adults (1-2 years old), with German Shepherds generally being the youngest when diagnosed (Parambeth & Steiner, 2011). Figures 4 and 5 provide a good illustration of the stark changes to the pancreatic physiology after acinar atrophy. Normal pancreatic structure is scarcely recognizable, becoming thin and typically transparent with prominent ductal structures. Histologically, early subclinical EPI may be visible as partial acini breakdown; however, when clinical signs become apparent, all acinar tissue has been destroyed, with atypical tissue left behind, often adipose in the case of PAA (Westermarck, 2012).

Another cause of EPI, that can occur in all dog breeds, although generally later in life than PAA, is chronic pancreatitis. This refers to the recurring inflammation of the pancreas. Under normal conditions the pancreas secretes digestive enzymes as inactive forms to help prevent autodigestion; however, when inflamed the pancreatic enzymes are activated. If the pancreas remains inflamed long enough, then pancreatic atrophy (Figure 5.) and fibrosis can occur leading to both exocrine and endocrine diseases, such as EPI and diabetes mellitus (IDEXX Laboratories, 2016). Chronic pancreatitis can cause the pancreas to shrink and become nodular with fibrotic growth. Histologically, chronic pancreatitis displays extensive fibrosis and increasing acini destruction the longer the inflammation occurs (Westermarck, 2012).

Clinical signs develop due to maldigestion and malabsorption of nutrients ingested and begin to show when 85-90% of the pancreatic acinar cells are lost (Parambeth & Steiner, 2011).

Severity of the disease can vary, as well as the time it takes for symptoms to develop. In some patients, signs begin to show within a few weeks, but also take much longer in others. This may be because dogs can have subclinical EPI (no recognizable symptoms) for months, sometimes even years, before it becomes noticeable (Kennedy, 2009). The key signs associated with EPI are typically pronounced (Foster, 2017).

Clinical signs, as well as signalment are useful for raising suspicion of EPI, however many of the symptoms are non-specific to EPI and can be seen in other disorders.Â  Reliable diagnosis can be made based on a pancreatic function test. The most consistent and reliable being the canine serum trypsin-like immunoreactivity (cTLI) test (Whitbread, 2016).

As trypsinogen is exclusively produced by the acinar cells of the pancreas cTLI can measure its ability to produce enzymes (Suchodolski, 2012). Performed after a fasting period of 12-15 hours, cTLI tests for concentrations of trypsinogen and trypsin circulating in the blood, via radioimmunoassay. Under normal conditions, small amounts of trypsinogen enter the serum from the pancreas and have a reference cTLI range of 5.7-45.2 Âµg/L (Suchodolski, 2012). However, due to loss of acinar cells, dogs with EPI have a much lower concentration of trypsinogen in the serum and may even be undetectable. Values below 2.5 Âµg/L are considered to be highly diagnostic for dogs with EPI, especially considering clinical signs are almost always present at these levels (Parambeth & Steiner, 2011). Results between 3.5-5.7Âµg/L rarely coincide with any clinical signs of EPI, however may represent subclinical EPI. At this point it is recommended that the patient is tested again after a one month resting period (Kennedy, 2009). TLI tests are species specific, making them highly sensitive to EPI and considered almost 100% accurate (Bilton Veterinary Centre, 2011).

Although cTLI is considered the ‘gold standard’ for EPI diagnosis, an enzyme-linked immunosorbent assay (ELISA) forFaecal pancreatic elastase 1 (FPE 1), another inactive enzyme produced solely in the pancreatic acinar cells, can be used(Parambeth & Steiner, 2011). A value of <10 Âµg/g of faeces is indicative of EPI, while >40 Âµg/g shows normal pancreatic exocrine function (Morgan, 2009). However, FPE 1 tests should be conducted alongside cTLI serum tests, as the rate of false positives have been shown to be as high as 23% (Steiner, et al., 2010).

Although restoration of pancreatic acinar cells is currently not possible, EPI is entirely manageable with the correct enzyme supplementation and dietary changes. Follow-up care is also essential for recovery and management, especially monitoring body weight and faeces. 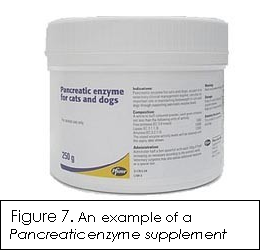 The preferred method of treatment involves the supplementation of pancreatic enzymes (lipase, amylase and protease). Raw and powdered enzymes are more effective than tablets, especially those with an enteric coating, as pancreatic bicarbonate is needed to remove the coating (Morgan, 2009). Dogs should initially be provided with 1tsp/10kg of bodyweight, mixed with each meal (Parambeth & Steiner, 2011). However, once clinical signs have been resolved, this can be slowly reduced until the lowest effective dose has been reached (cTLI can be used to monitor this while still supplementing with enzymes, as it is unaffected by exogenous enzymes). Raw pancreas can be used as an alternative to powder, in this case 30-90g should be used per teaspoon of powder (Steiner, 2017). Response to enzyme supplementation should see results within a few days, however an increased dose or a change from porcine to bovine enzymes and vice versa may be needed (GlobalSpan, 2013). Around 3 in 25 dogs suffer from oral bleeding, although this appears to correct itself once the dose was lowered (Steiner, 2017).

A highly digestible diet, with a low fibre % (below 4%) is recommended, as fibre inhibits pancreatic enzyme activity. Another consideration is the provision of a raw diet, as raw meat contains its own enzymes that aid in digestion (GlobalSpan, 2013).

More than 80% of dogs with EPI suffer from cobalamin deficiency, which prevents weight gain regardless of enzyme supplementation; for this reason, regular cobalamin and folate serum concentration tests should be performed and if necessary, cobalamin injections provided (Steiner, 2017). Some dogs will only need short term cobalamin supplementation, while others may need it for the duration of their life.

With SIBO being a common condition alongside EPI, antibiotics may need to be administered initially and potentially followed up with probiotics to help restore gut flora.

Potential for a normal and long life is extremely favourable with the correct management, however clients need to be made aware that EPI is a lifelong condition and can be extremely expensive, with some enzyme supplements alone costing over £3000 a year, although this can be reduced by shopping around (epi4dogs, 2012).