In response to the essay question: “Echinoids – the key to geologic time?” School of Earth Sciences, Palaeobiology Thomas Glann

Echinoidea, a class of the Echinodermata phylum, are probably the most interesting and compelling palaeontological story to date. Their story starts in the late Ordovician period, approximately 460 million years ago, and you can still observe the echinoids in modern day environments as sea urchins, heart urchins and sand dollars (Paul et al., 1984). Echinoids are marine only organisms and are both epifaunal, being mobile bottom grazers, and infaunal which burrow. Echinoids are usually spherical, to heart-shaped in morphology and have an endoskeleton called a ‘test’ which consists of calcium carbonate plates which are adjoined by ligament (Chakra et al., 2011). These ‘soft joints’ between the spines and calcitic plates are not preservable in the fossil record, which often leads to dis-articulation and spreading of body fossil parts which can make identifying or finding a full echinoid fossil a difficult task (Kier, 1977). Throughout their period of evolution the echinoid class underwent major radiations that have been so far, clearly evident in the fossil record and these major events in the evolutionary cycle could be very beneficial for determining key points and intervals in the Earth’s geologic history and could possibly define dating correlations for use in biostratigraphic studies. These ideas and theories will be discussed further in this essay.

Regular and Irregular Echinoids, and their preservation potential

Before we investigate the evolutionary adaptations the echinoids took during and after the major extinction events, let us look at the basic morphological and diversity factors of the differing echinoid subclasses – regular and irregular. The echinoids are accommodated in a large number of marine biomes all over the world, and this is from the intertidal shallow zones to the deep seas, however, the primary areas of growth and population diversity amongst the echinoids were in the shallow shelf areas (Kroh et al,. 2009). Throughout most of the evolution of the echinoids there were two major divisions, one being the regular echinoids which are the epifaunal benthic mobile grazers and two, the irregular echinoids which are infaunal burrowers. In the echinoids adult stage of the life-cycle, the regular echinoids, sea urchins, tend to exhibit a high relief, spherical and/or oblate symmetrical skeletal test where the irregular echinoids i.e. heart-urchins and sand dollars tend to be low relief and are somewhat flattened and asymmetric in their skeletal test (Chakra et al., 2011).

As discussed briefly in the introduction, the dis-embodiment of the echinoids calcitic test plate structure is problematic for its preservation potential in the fossil record, and this preservation is further effected by the echinoids mode of life. Regular echinoids reside on top of the water-sediment interface and therefore have their skeletons (or tests) exposed to dangers after death such as scavengers and strong water currents (Kier, 1977). However irregular echinoids have a somewhat better preservation potential because of their very mode of life of being infaunal burrowers, and it protects their dead tests from being destroyed by scavengers and strong water currents (Kier, 1977). In summation, it can be said that because the irregular echinoids are already under the water-sediment interface, their tests take on early mineralisation and sediment in-filling after death and decay which protects the test structure and provides a better chance for it to be included in the fossil record relatively unaltered (Bajo et al., 2007).

The crossing over of the Permian-Triassic Boundary

The Permian-Triassic event was a mass extinction that has been classified as a critical time to the evolutionary history of the echinoids, it was also a time of extreme reorganisation of the marine fauna (Oji et al., 2005). The Echinoidea were one of the most resilient marine species that have survived this extinction and this was probably due to their deposit-feeding modes of life. The post Permian periods was a key point in the sub-phylum where the divergence of the echinoids into regular (epifaunal) and irregular (infaunal) which began to be more obvious in the stratigraphic rock record (Oji et al., 2005).

The first irregular echinoid appeared in the early Jurassic, the Sinemurian age to be exact (Kier, 1982) and this is when a fast diversification occurred within the sub-phylum, because a new method of feeding and living within the sediment allowed for a rapid increase in population for the irregular type of Echinoidea (Kier, 1982). This evolution and diversification continued through the Jurassic and it was found through fossil studies that the irregular forms of the echinoid species dominated the total population of recoverable Echinoidea fossils by 75% in the Cretaceous period (Kier, 1974). See figure 1 for illustrations on the eventual morphological changes from the regular to the irregular echinoid through to the Jurassic, we can also see flattening and elongation of the test and the shifting of the anus posteriously through time (Kier, 1982).

This evolutionary cycle eventually leads to the sand dollars, which had their majority reign on the benthic environments during the Tertiary in the early Eocene epoch (Kier, 1982). Sand dollars have a large, almost flat test and are infaunal, these evolutionary changes are what allowed the sand dollar echinoid to thrive more efficiently in the sea floor sediment. The flattened test made it less of a task for the echinoid to burrow and feed in shallow infaunal environments (Kier, 1982), additional to this the morphology of the sand dollar enabled it to live (and die unaffected by alteration) in high energy neritic environments (Bottjer et al., 1998). 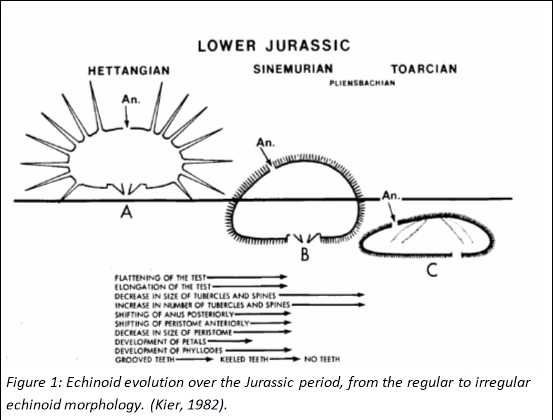 However there are two competing views on why the echinoids diverged in morphology after the Permian-Triassic mass extinction. The question is why did the echinoids infaunalise? Two prominent researchers on the topic theorise that (1) the Echinoidea began to colonise a new living space that has been relatively unoccupied (Borszcz et al., 2013) and (2) that the Echinoidea began to infaunalise in response to external threats such as predation (Mooi, 2001).

Researchers in the field of palaeontology link fossil/taxa assemblages to form what is called a ‘biozone’. Biozones can be correlated in lithological rock units to formulate relative temporal ranges which in turn links these units to periods of Earth’s previous geologic history (Scott, 2013).

So how can we correlate this to biostratigraphy and why is it useful to certain points in the Earth’s history?

It should be reiterated that the Echinoidea, a class of the Echinodermata have been in our rock records since the late Ordovician period (Paleozoic era) and they are most certainly still with us today, a timeline spanning 480 million years. This represents a long lifetime for a single phylum of organisms to survive and evolve, and not withstanding this they have survived major mass extinctions. This gives us a picture that the echinoids are a rather resilient class of surviving organisms.

But the echinoids long-lived resilience runs short when the information above and the past scientific research completed on the Echinodermata clearly indicates a problem with their tests being preserved adequately in the fossil record. We learnt that most of the Echinoidea fossil record is poor throughout the Paleozoic era due to the lack of irregular ‘more preservable’ echinoid tests which of course came later. The echinoids’ fossil record became more prevalent in the late Mesozoic era (Cretaceous) and more so throughout the Cenozoic era due to the rise of the infaunal sand dollar echinoids which are a direct evolutionary result of environmental conditioning such as predation and/or finding new homes underneath the water-sediment interface.

The Echinoidea class of organisms could indeed be used as a correlation device in biostratigraphic studies mainly because of its long standing existence over geologic time. So utilised in conjunction with other fossil taxa assemblages it could potentially provide a relatively accurate time window to date sedimentary strata over the Paleozoic through to now. More importantly, we see large well preserved concentrations of the irregular echinoid (sand dollars) in modern bedrock, from the Palaeogene, Neogene and Quaternary periods in the Tertiary (aka Cenozoic) and we can accurately date these rocks and form a strong correlation biozone, as evidenced in the recent study ‘Echinoid concentration beds”, a journal article by Heather A. Moffat and David J. Bottjer in 1998.

The echinoids are a useful fossil taxa to study intervals in the Earth’s history because they show morphology divergence and rapid evolution following mass extinctions, for example the Permian-Triassic boundary – this is where we saw the echinoids began to diverge from the regular to irregular morphologies. As discussed above, there are competing theories as to why exactly this happened, but this divergence and diversity change could render a more complete image of how life has evolved periodically in the oceans especially after what is a well-known global mass extinction event.

Kier, P.M., 1974. Evolutionary trends and their functional significance in the post-Paleozoic echinoids. Journal of Paleontology 3, 1-95.

Kroh, A., Smith, A.B., 2009. The phylogeny and classification of post-Palaeozoic echinoids. Journal of Systematic Palaeontology 8, 147-212.

Mooi, R, 2001. Not all written in stone: interdisciplinary synthesis in echinoderm paleontology. Canadian Journal of Zoology 79, 1209-1231.