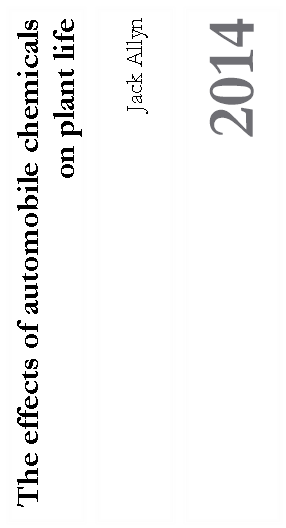 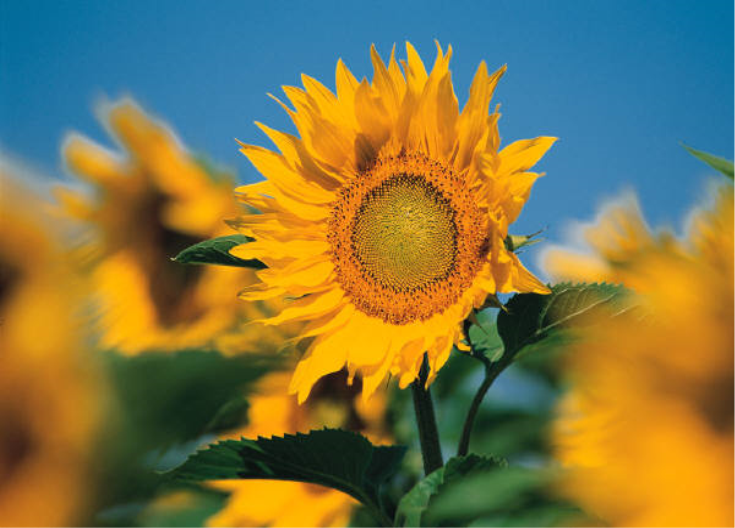 Introduction and Statement of Purpose

Introduction and Statement of Purpose

The purpose of this project was to find which chemical, which would be released in a car crash, would be the worst for the surrounding plant and animal life. The inspiration for this project came when driving down the road and there was a construction crew that was tearing up the roadway and laying down new asphalt. When passing by the crew there was no barrier on the edge of the road and there were some fluids flowing off of the road and going down into the lake below. This led to thinking about fluids that are released by cars if they get into accidents. The intent of this experiment was to gather information on three different types of car fluids and graph the effects of the chemicals on the plants. The expectation of the experiment was to be able to find the chemical that had the worst effect on the plants.

Brake Fluid is a hydraulic fluid used in hydraulic brakes and hydraulic clutch mechanisms. There are three main types of brake fluid, DOT3, DOT4, and DOT5. DOT3 and DOT4 are made of a glycol base while DOT5 is silicon based. One of the Main differences is that DOT5 will not absorb water while DOT3 and DOT4 will. Brake Fluid has a very high boiling point, which means when its compressed it doesn’t turn into a gas. If the Brake Fluid turned into a gas there would be no pressure to activate the brakes. If water does get into the brake fluid reservoir containing DOT3 or DOT4 they will mix lowering the boiling point of the brake fluid. Water does not mix with DOT5 brake fluid so it will form pure water pockets in the reservoir causing corrosion and other problems. The brake fluid used in this experiment was DOT 3.

Antifreeze is chemical additive that lowers the freezing point of water-based liquids. Antifreeze is used in internal combustion engines and other heat-transfer applications. Its purpose is to prevent water from turning into ice in a rigid enclosure and causing damage. Antifreeze also has other implications. For example it is used to de-ice aircraft wings. Certain types of Antifreeze are also very poisonous. Ethylene glycol is one of the poisonous types and it is especially dangerous due to its sweet scent and taste. It is most commonly used in automobiles. If ingested it will induce severe vomiting and diarrhea and it can lead to death. Glycerol was used as an antifreeze agent but its freezing point was too high. It did have a major advantage though. Its non-toxic, and it is used in many fire sprinkler systems to keep the pipes from freezing. The antifreeze used in this experiment was Preystone 50/50.

DEXRON: Includes friction modifiers that are added to the fluid. Dexron II differs from the original fluid in that it has better viscosity control and it includes an oxidation inhibitor. Dexron IIE is designed for an electrically controlled transmission. Dexron III adds more corrosion and oxidation additives than the other Dexron fluids. This type is mainly used by GM vehicles.(ETE Reman)

MERCON: It includes friction modifiers that are added in like DEXRON. This type is primarily used in Ford vehicles. There is also MERCON V which is engineered to be used in Ford products built after 1997.(ETE Reman)

TYPE F: This type of automatic transmission fluid does not include friction modifiers. It is mainly used in Ford products built from 1967 to 1987.(ETE Reman)

If chemicals are added from an automobile accident to newly sprouted plants, the plants growth will be stunted and they will slowly die off. The reasoning behind this hypothesis is that automobile chemicals have very volatile chemicals in them that could harm the environment. If the chemicals come into contact with the surrounding plant and animal life it could have major effects on the ecosystem.

Many materials were used to make this experiment possible. The materials needed were four pipets, four 2 liter soda bottles, automatic transmission fluid, antifreeze, brake fluid, water, 48 16 oz. cups, four large trays, ruler, Wisconsin Fast Plants, dirt, and 4 cups that can be any size (preferably small). To prepare for the experiment set up the trays on to tables with a protective cover over the table to prevent damage if any of the chemical mix is spilled. 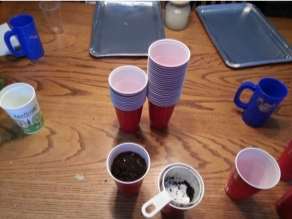 In this experiment four different solutions were tested each on their respective group of plants. There were twelve plants per group for a total of 48 plants. Before the amount of liquid to give the plants was chosen a test was done to determine the amount they would be given. Three cups were place into a tray and each was given different amounts of water. 25 mL, 50 mL, and 100 mL were the three different amounts. 25 mL was chosen because it did not flood the cup and it didn’t come spilling out the bottom.(When it was time to administer the chemical mixes it was decided to give them 9 mL to prevent drowning the plants). To make the chemical mix 1000 mL of water was put into a washed out coke bottle. Then 10 mL of the chemical was put into their respective coke bottles. This created a 1:100 ratio. The chemicals were administered this way to prevent one plant from getting more chemical than another plant.

*These numbers were only for one trial. Double the numbers listed if you want to have enough for two trials. 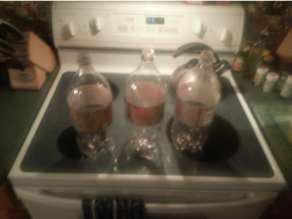 The data for this experiment was collected on the nights that the plants were watered. All groups would be watered and then each individual plant was measured. To measure them the tallest part of the plant was raised to the maximum height it would go and then the measurements were taken and recorded in the journal.

In this experiment the data has shown that the Brake fluid is by far the worst substance for emerging plant life. Almost all the plants from that test group died within day 4 of journal entries. The brake fluid would turn the plants into a thin, almost spider web, string. The Antifreeze came in second for being the worst substance tested. It also had a very peculiar way of killing the plants. On the top of the soil a mold started to grow about halfway through both of the trials. The plants beat the mold during the first trial but they weren’t so fortunate in the second trial. The mold made the plants very brittle and they were difficult to measure. By the end of the second test the plants were so brittle that they would break if you touched them. The automatic transmission fluid was the third worst chemical and all it did was stunt the growth of the plants. Lastly, the water was the best for the plants and the plants grew normally. 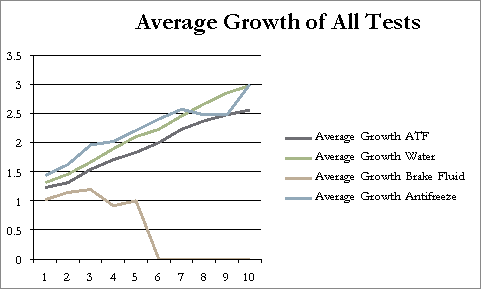 The hypothesis stated that the chemicals would stunt the growth of the plants and would slowly kill them off. The results from this experiment supported the hypothesis for this project. There were a few limitations with this experiment. First the measurements were not very accurate. It was very difficult to get accurate measurements because any minor movement of the head would change the measurement. Another limitation with the measuring was handling the plants so that they did not break while taking the measurements. This project could be applied to the real world in many different ways. It could be used to tell chemical manufacturers how to lessen their environmental footprint on the earth. It could also help emergency response team better understand the effects that these chemicals have on the surrounding environment and how they should deal with them. Other researcher’s findings support my hypothesis and the outcomes of this experiment. This project could be improved upon by getting more precise measurements of the plants. A height gauge would be a more effective tool at measuring the plants because has a platform that has a ruler on it with a digital interface that is very precise. To further study this topic a new set of chemicals should be tested to see if there is any that are worse than the brake fluid. If this hypothesis were to be studied further a better way to grow the plants should be used and a better way to give them the right amount of chemicals.

This project had many limitations that should be addressed. The first limitation of the project was the lighting of the plants. Grow lights are expensive so they were not used in this project. The location that was chosen had two windows so that all four trays could sit in front of them but it is uncertain whether they got equal amounts of light. The second limitation was measuring the plants. The measurements that are used in this project were not very accurate. The measurements were somewhat of an estimate due to the fact that if you moved a little bit the measurements would change. This made it very difficult to get accurate measurements. Lastly, it was assumed that all the plants were getting the same amount of chemical dosages each time. There may have been slight variations in the amount they were given. For example the automatic transmission fluid did not mix well with the water because it was oil based. This made it very difficult to tell how much each plant was getting due to some large blobs of the chemical.

DEXRON: is the trade name for a group of technical specifications of automatic transmission fluid created by General Motors (GM).

MERCON: is the trade name for a group of technical specifications of automatic transmission fluid created by Ford.

Wisconsin Fast Plants: (brassica rapa) are rapid-cycling Brassicas. They are members of the crucifer family of plants.