The effect of SURFACE AREA : VOLUME RATIO on the rate of DIFFUSION IN PLANT cells

Diffusion is movement of the particles from a place higher concentration to a place of low concentration. In the experiment, agar cubes were used to resemble plant cells. The surface area to volume ratio of the agar cubes was investigated by cutting out different volumes agar and then immersing them in sulphuric acid to investigate how the rate of diffusion is affected.

Simple passive diffusion occurs when molecules pass through the lipid bilayer of a cell membrane. A plasma membrane is an outer membrane of a cell, which consists of two layers of phospholipids and entrenched with proteins. It is a thin selectively permeable membrane layer, which surrounds the cytoplasm and other elements of the cell. Membranes are in motion with the fast drifting lipids and slower drifting proteins. The labelled diagram below shows a plasma membrane.

The different parts of the cell membrane play different significant roles to enable it work as a whole. The proteins in a plasma membrane serve diverse functions such as transport, enzymatic activity and cell to cell recognition amongst many other functions. The carbohydrates are only found on the outside face and attach to lipids or protein to enable cells to distinguish/ recognize one another. The membrane hence allows nutrients and other essential elements to enter the cell and waste materials to leave the cell. Small molecules, such as oxygen, carbon dioxide, and water, are able to pass freely across the membrane

The aim of this investigation was to examine the relation between surface area and volume ratio and how it affects the rate of diffusion in plant cells.

Calculating % diffusion in each cube: 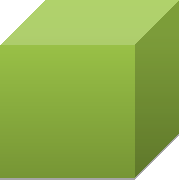 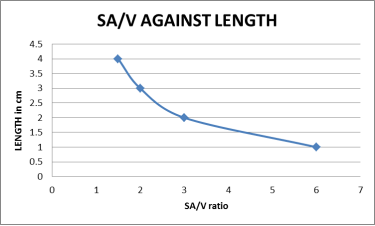 Surface Area is the measure of how much exposed area a solid object has, expressed in square units (x2). It determines the exchange of materials between the cells and its environment. Volume is how much three-dimensional space a substance (solid, liquid, gas, or plasma) or shape occupies and is expressed in cubed units (x3) and it determines the amount metabolism in the cytoplasm.

From table 1.1 above, the surface area to volume ratio decreases as the surface area and volume get bigger and this is graphed against the length in graph 1. When the length increases the ratio gets smaller; this shows as organisms get bigger it becomes more difficult for them to exchange materials with their surroundings. This is evident in the calculations in table 1.2; as the cubes got bigger, the percentage of how much acid had diffused became lesser. In cube A, which was the smallest, the sulphuric acid diffused in 100% but in cube D, which was the biggest, only 86.77% diffused in. The images below show how the acid was diffusing into the agar when immersed in sulphuric acid.

To meet its metabolic needs, a cell must have sufficient surface area for its volume and this relationship is described as a “large” SA: V ratio. Thus the bigger cells have greater metabolism than smaller cells, but bigger cells have proportionally less surface for exchange. The ratio of the two is critical. Cells surface area and volume increases at different rates. The volume (V=needs) increases faster than surface area (SA= supply)

Therefore SA/V ratio actually decreases with increasing cell size. The decreasing SA/V ratio limits the cells from growing larger than 100 mm. Without enough surface area for its size, such a large cell will not be able to supply its own needs as a cell grows larger, while both the supply and demand increase, the ‘need’ quickly outpace the ‘supply’. At that point, the cell must stop growing or divide into two smaller cells (cell division) or it will die due to suffocation of waste unable to diffuse out fast enough or get nutrients fast enough so it will either be poisoned or starve. 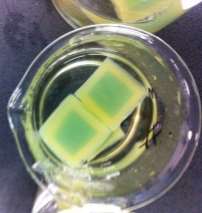 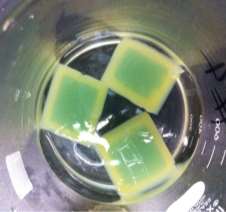