Enzymes are proteins produced by living cells that act as catalysts during a reaction, meaning they lower the activation energy needed for that reaction to occur. Activation energy is the amount of energy required to start a chemical reaction. In an enzyme-catalyzed reaction (ES), the substance that is to be acted upon is the substrate (S), binds to the active site of the enzyme (E). The active site is the portion of the enzyme that interacts with the substrate to form the desired product (P). Each active site on the enzyme has a three-dimensional shape that is unique to the substrate it will bind with. The following equation represents this process: E+S ïƒ  ESïƒ  E+P (Frederick, 2012). Enzymes are not changed during this process and can be recycled to break down additional substrate molecules. However, its unique shape can be altered by certain factors causing the enzyme to be inactivated and slow down its reaction rate (Frederick, 2012). Some of the factors that affect an enzymes reaction are changes in temperature and pH. Enzymes require an optimal range of temperature and pH in order to have an effective enzyme-catalyzed reaction. The enzyme used in this experiment was catalase, whose function is to prevent the accumulation of toxic levels of hydrogen peroxide formed as a by-product of cellular processes. Catalase breaks down the hydrogen peroxide into water and oxygen before it damages the cell (Frederick, 2012). The purpose of our lab is to prove[1] how catalase speeds up the break down of hydrogen peroxide and determine the reaction rate at which it does[2]. The effect and rate[3] of enzyme activity on potato cells and pH levels can be measured by the thickness of the foam layer produced in a test tube[4]. The independent variables in this lab are temperature and pH and the dependent variable is the thickness of foam being measured [5]. It is predicted that if enzyme-catalyzed reactions require an optimum temperature range, then no specific temperature should have a negative effect on catalase activity[6]. If the enzyme catalase is placed in different solutions containing different pH levels, then the enzyme will function most effectively at an acidic pH or a pH of 2[7].

The following materials were used in the temperature lab: six test tubes, test tube rack, hot water bath at 90°C, room temperature bath at 23°C, iced water bath at 0°C, sharpie, stopwatch, sterile pipettes, Celsius thermometer, metric ruler, bottle of 3% hydrogen peroxide, bottle of potato extract, and tap water. First we labeled two test tubes for each corresponding water bath temperature. Using the sharpie we wrote ‘hot’ on two test tubes, ‘cold’ on the other two, and ‘room temperature’ on the last two. Beginning with the ‘hot’ labeled test tubes, and using a sterile pipette for each different substance, we placed five drops of potato extract, five drops of water, and five drops[8] of the 3% hydrogen peroxide into each of the ‘hot’ test tubes. We set the stopwatch to five minutes and then carefully placed the two test tubes in the hot water bath. After the five minutes we took them out and waited one more minute before measuring the amount of the foam produced using the metric ruler. We repeated this procedure with the remaining iced water bath and room temperature water bath. Record all data on appropriate chart.

The following materials were used in the pH lab: three test tubes, test tube rack, metric ruler, bottles of pH 2, pH 7, and pH 11, bottle of 3% hydrogen peroxide, sharpie, three sterile pipettes, stopwatch. Using the sharpie, we first labeled test tubes with different pH levels, and placed them on test tube rack. Then using a sterile pipette we placed five drops of potato extract into each of the test tubes. Finally, using a sterile pipette for each different pH level, we added five drops of each different pH level to the corresponding labeled test tube (pH 2, pH 7, and pH 11).[9] We set the stopwatch to five minutes and waited for the catalytic effect to take place. Then using the metric ruler we measured the thickness of the foam in millimeters. Record all data on appropriate charts.

The table below summarizes our results for the temperature lab, which were the same as the expected results thus supporting our findings (Briggs, 2013)[10]. Room temperature water at 23° C had the greatest effect on catalase enzyme and produced the most foam at 13mm, while the 90° C water produced no foam at all; supporting how enzymes do require a specific environment and optimal temperature range in order to have an effective enzyme-catalyzed reaction. 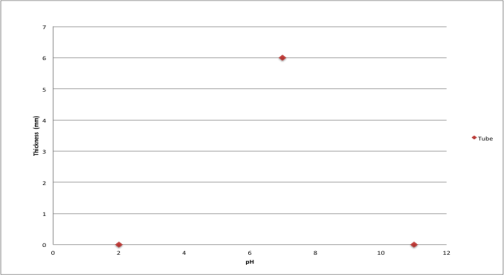 The purpose of our lab is to prove how catalase speeds up the break down of hydrogen peroxide and determine the reaction rate at which it does. After reviewing and discussing the results we realized that both of the experiments disproved both of our hypotheses. Both results showed significant changes in the amount of foam produced by the hydrogen peroxide, supporting how enzymes require an optimal range of temperature and pH in order to have an effective enzyme-catalyzed reaction. The room temperature water produced the most foam, more in one test tube than in another, leading us to believe that we may obtain more accurate results if we do one test tube at a time instead of exposing both to the same water temperature at once[12]. It also supports how enzymes work better at room temperature than at high temperatures such as in hot water where the enzyme denatures and is not able to function properly. The iced water produced the same amount of foam in one of the test tubes as the room temperature water showing how the effect was in fact happening but at a much slower rate, showing that cold environments do slow down enzymatic reactions[13]. For the pH labs, the results show how one pH was too acidic and the other too basic in order for the enzyme to function properly. The pH level that produced the most foam was the neutral (7) while pH 2 and pH 11 produced no foam at all, supporting how its unique shape can be altered by certain factors causing the enzyme to be inactivated. If we would have had more time to repeat the experiment we could have timed the test tubes more accurately in order to get the expected results. Over all, this lab taught us how important enzymes truly are in our daily lives.

[1]See the lab report notes document about use of the word “prove” in reports.

[2]We didn’t study the rate of the reaction. If we did then time would be the variable OR the result. Since the reactions had stopped at the end of each experiment, the foam was measure of the total amount of catalase activity and we cannot draw any conclusions about rate.

[3]Rate could have been measured, but our methods do not allow for it.

[4]You should mention that the foam is made of water and oxygen.

[6]A better way to say this part would be “then the amount of foam produced at different temperatures will be the same”.

[10]I am not deducting points for something so minor, but the citation I gave you had two authors. When there are two authors you include both in an in-text citation and they need to be in the same order as in the full citation. This would be, (Lafortune and Brigs, 2013). If there are more than two authors you use the last name of the first author followed by “et al.”. If there had been a third author for this it would need to be (Lafortune et al., 2013). Just so you know

[11]Supporting our hypothesis that…

[12]It is good to discuss ways to improve the methods but it is OK for results to vary. If this were a real experiment you would have done it hundreds of times and used the averages for your results.

[13]I can see where you are going with the rates. Cold temps are not denaturing the enzyme but slowing it down instead. We would have needed to design the study differently to test this though.