The effect of sucrose concentration on percent change of russet gold potatoes.

Homeostasis is a maintained and stabled movement of materials through the membrane of the cell; it is traveled through the cell’s cytoplasm to reach equilibrium (College Board, 2012). To add on, diffusion, which is known as the most common configuration of movement, is the process where molecules will cooperation with each other by spreading out over large areas to create the result of their kinetic energy at random motion (Hyperphysics, 2014).  The membrane of the cell is known as a phospholipid bilayers which contains embedded proteins. Developing movement from the materials inserting in and out of the cell is controlled or adjusted specifically by the phospholipid fatty acids (College Board, 2012). Most importantly, osmosis is the process in which water moves across a plasma membrane; it is a passive transport, so it does not require energy to be applied. (Biologycorner, n.d.). Osmosis occurs when a solvent or water tries to relocate from an area of high concentration to a lower concentration (Biology Corner, n.d.). There is a point where two specific solutions are at an equilibrium with the same amount of suction, which is called the isotonic point. Sugar is in the molecules of a potato, so it can state whether the sucrose solution will turn the tube based on what the molarity level is (Nutrition Data, 2014). Sugar is a solute; therefore, it will attract water to itself (Biology Corner, n.d.). The cell membrane offers a protein structure to assist it by gliding products that would not usually venture across swiftly (College Board, 2012). Also, the cell’s membrane is permeable because it intently chooses which molecules are allow to enter or leave it (College Board, 2012). The purpose of the investigation was to determine the effect of sucrose concentration on the percent change of russet potato.  If sucrose concentration increases, then the percentage of weight of the russet gold potatoes will decrease due to the solution having less sugar than cells.

This investigation was formerly performed by the AP Cellular Processes Energy and Communication: Investigation 4 Diffusion and Osmosis (College Board, n.d.). Through the diffusion and osmosis experiment, there needs to be 18 equal sized russet gold potatoes by a core cutter. With a knife made of plastic, it must carefully slice the remainder of pieces of potato skin that the cork borer could not do. Soon after, before setting the potatoes in their designated plastic cups, weigh and record. Then, after weighing each group and recording the answers, place the potatoes in their plastic cups. After doing that, in each cup that are labeled with different amount of concentration, place a total of 3 pieces of sweet potatoes. The experimental groups are going to be the 0.2M, 0.4M, 0.6M, 0.8M, and 1.0M solution concentrations; for each concentration, make sure to observe what is happening. After, be sure that the 3 pieces of the sweet potatoes placed in the cup are fully in the solution to make sure that the most results are correct and valid. Now, keeping the potatoes absorbed in the solution for one day, remove the potatoes from its solution and dry it to be able to weigh it. Lastly, look at the similarities of the weights before and after to make observations of my findings. 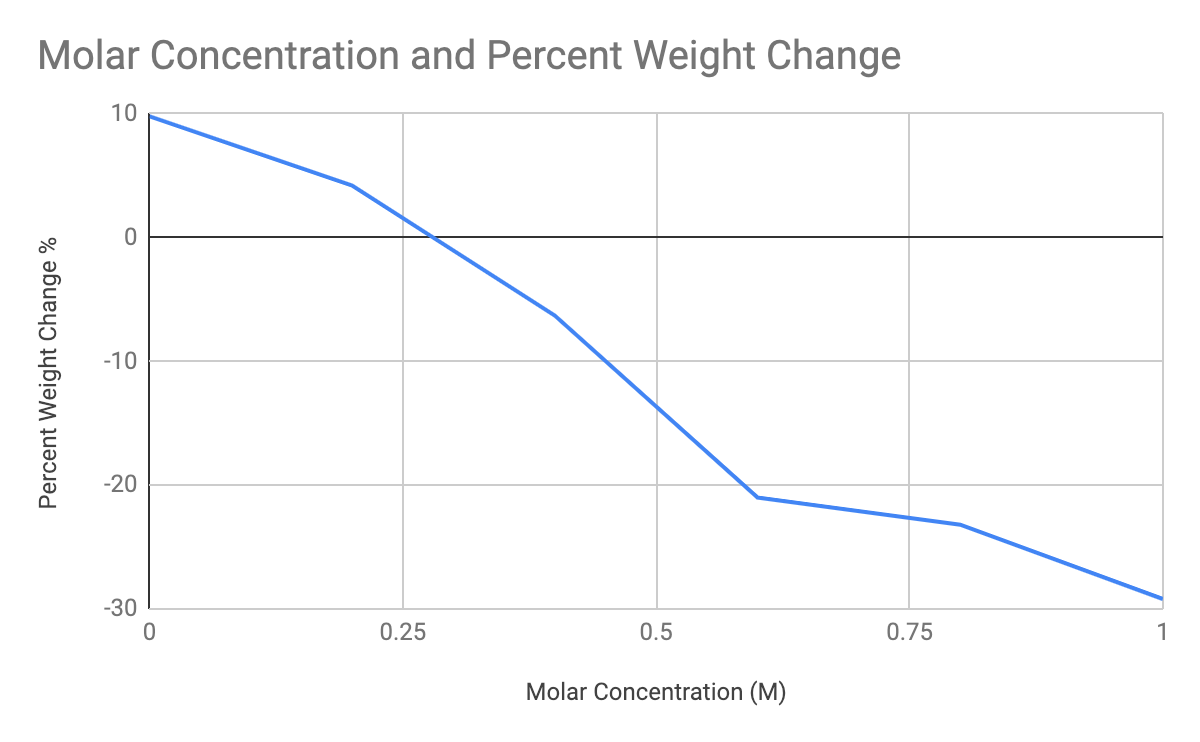 According to the graph, we can clearly see that the percent weight change decreasing rapidly as sucrose rises. The data collected came from given helpers: Mrs. Henderson’s percentage change numbers and Peter Pham’s weight before and observations. As it is stated in the data table above, there was a trend that was constantly decreasing when the sucrose concentration increased. The isotonic point on my graph is located when the line graph crosses the x-axis. We can infer or assumer that it will remain at zero if the measure weight were to be different through a specific molarity of sucrose. Adding on, the hypotonic solutions is the 0 M and 0.2 M solutions due to them keeping a positive percent change; henceforth, the hypertonic solutions is the remainder of the sucrose solutions because of vice versa: hypertonic solutions have a negative percent change. The weight decreases when the sucrose concentration increases because of the hypertonic solution absorbs the water out of the potatoes.

The ionization (i) is for the sucrose, which stays at 1 because it does not ionize in water. The molar concentration is C, which is 0.27. R represents when the pressure is at a constant state. T represent temperature in kelvin; the way to find that answer is to collect 20 celsius and add 273 to it. The number is -6.57, which is really low. Due to the number being so low, it has a higher potential to suck in water, also known as water potential.

The purpose of the investigation was to determine the isotonic point of plant cells and use this information to calculate the water potential. In this lab, the potato lost weight due to the different molarities of sucrose solutions. The data supports my hypothesis due to the decreasing of the percent weight change through the rising sucrose concentration. The more concentration there is in the solution, less water would be present, which we can move onto diffusion: the movement of the molecules travels from an area of higher concentration to an area of lower concentration. It will result in weight loss of the potato, which helps support my hypothesis.

One experimental strength of this experiment includes not using just one piece of potato, but three pieces to develop a more accurate result for the percent weight change. Also, having more than one trial allowed to see the possibilities of the experiment and to ensure that there are not that many errors while doing the lab. However, there could have been some weaknesses of the lab. One weakness could have been drying out the potato more than it needed to or less than it should have. It may not seem that it would be a huge affect, but it is still something needs to be aware of. In addition, since I was not there to do the actual procedure, the measurement of the sucrose solution could have been poured unevenly into each plastic cup. If I were to improve this lab, I would make sure I would be there to do the experiment myself to see the correct and wrong result for myself.

One I would extend this lab to test different variables to see if my hypothesis would change or not. I would love to try mangos because they do collect sugar from photosynthesis, which will definitely have a different result from my data result. Also, I would like to try use a different type of concentrate that has more molarity than sucrose concentrate.