Bacteria are common prokaryote micro-organisms that are undetectable to the naked eye. These micro-organisms are evident throughout the world in all mediums whether it be, dirt, water or organic matter. The main factor contributing to the abundance of bacteria is the ability to reproduce without another partner. Bacteria undergo a process called Binary Fission, where the cell makes a copy of genetic material, DNA, and segregates these to each ends of the cell membrane. Subsequent to reaching double the original size, a cell wall forms in the middle of the two molecules which splits the cell into two identical cells. (M.J Farabee, 2010) Microbial growth is optimal under particular circumstances and surroundings. These surroundings constitute moisture or a warm atmosphere which are ideal for bacterial growth as heat allows the bacteria’s enzymes to work optimally, helping it to speed up the process of reproduction. However, if environmental factors are altered so that conditions are unfavourable for bacteria, the micro-organisms will either have metabolic processes slowed or stopped completely.

Bacteria are functional within the human body. There are beneficial bacteria in our bodies that help with digestion and the breakdown of external substances. They also provide an extra cover layer to prevent harmful bacteria from settling into the body. Paradoxically, there are harmful bacteria called pathogens. Pathogens cause afflictions to all living organisms. The human body is prepared for this with natural defences against some of the common pathogens with the help of the human immune system. (Science Daily, 2013) The mouth is a common place for bacteria to manifest and enter into the body. Without proper oral hygiene, a numerous number of diseases and complications may occur within the mouth. Products such as toothpaste and floss are used to keep oral hygiene to peak condition. However, toothpaste and floss only physically move the bacteria to another site. Mouth wash is a product that contains active ingredients that actively kill bacteria. Alcohol is a common active ingredient in many of the commercial mouth washes. Alcohol kills bacteria by first making the lipids, which contribute to the outer protective cell membrane, more soluble in water so that the cell membrane begins to lose its structural integrity. As the cell membrane disintegrates, alcohol can then enter the cell and denature proteins within the bacteria. (Claudia Gutierrez 2013) However, Alcohol, itself, is also harmful to the mouth at certain levels of concentration, being linked to diseases such as oral cancer. (McCullough MJ, Farah CS 2008)

E. coli is a bacteria that lives in the digestive tracts of humans and animals. It has an optimal growing temperature of

which is similar to the body temperature of a human

. With a strong enough concentration of E. coli strands entering the body, afflictions occur such as kidney failure, anemia or urinary tract infections. They are able to enter orally, which is a common way for a humans to contract an E Coli infection. (WebMD, 2012) Mouth wash effective item to inhibit the growth or the entrance of pathogenic E Coli, however, because Mouth wash being also bad for the mouth, an effective concentration must be determined so it can be both safe and inhibit pathogenic bacteria from entering the body systems.

To determine to effect of concentration of mouth wash to the bacteria count.

If a higher concentration of mouth wash is placed within a bacterial colony, then the bacterial count decreases. This is because there is a higher concentration of alcohol and subsequently, the proteins within the bacteria will be denatured to a further extent. Variables. The independent variable is the concentration of alcohol within the mouth wash placed into the petri dishes with bacteria. The controlled variable is water placed into a petri dish as water is not basic or acidic have will have minimal effect on the bacteria count. The dependant variable is the zone of inhibition. The other controlled variables within this experiment are lighting, temperature, time of day and equipment.

The data pertaining to the antimicrobial potential of the different concentrations of mouth is presented in appendix 7.2. Half the concentrations, 100%, 80% and 60%, were effective in inhibiting bacteria growth within the plates. However the other half, 40%, 20% and 0% were ineffective in inhibiting the microbial growth within the plate. In the three concentrations that showed definitive zone of inhibition, the higher the concentration the wider the zone of inhibition was. The widest zone of inhibition was the 100% mouthwash which had an average of 0.834mm zone of inhibition while the smallest was 60% which had an average of 0.43mm zone of inhibition. Discussion. E Coli was used due to it being a pathogenic bacteria that can also be airborne and enter the body through the mouth. E Coli, has similar characteristics and properties to other bacteria. It is a prokaryotic microorganism which means that it is a uni-cellular organism that has a cell membrane to maintain structure and protect the cell’s contents against mechanical stress. Listerine is on the acidic side of the pH Scale with a pH of 4.3, diluting it with water, with a pH of 7.5, (Dr H.K 2014) neutralizes the solution to a certain degree, depending on the ratio of water to mouthwash. With 100% Mouthwash, the solution is not diluted with any water making it the strongest solution. This means the alcohol within the mouthwash is at full strength and can subsequently dissolve the bacteria’s cellular membrane, denature the proteins responsible for function and cause the hydrophobic lipids to freely dissolve and rupture the bacteria. (Claudia Gutierrez 2014) The 80% and 60% percent followed this trend. As they had more water in them, they became weaker and therefore their zone of inhibition was much smaller than that of the 100% The 40%, 20%, and 0% did not post results as they were oversaturated with water. There was an imbalanced ratio between water and alcohol within the mouth wash. This meant that the water would have nullified the alcohol’s effect and would have no allowed any of the alcohol to break down any of the cell membrane of the bacteria and in turn showed no zone of inhibition. However, that may be an 20% and 40% may be an anomaly as results seen in other studies where Listerine was tested showed that there were zones of inhibition, (Parkar SM, Thakkar P, Shah K, 2013). A possible cause for this deviation may be placing the filter paper onto the agar plate with inadequate amount of solution, leading to no solution going the bacteria and therefore no results. However, they did not use the exact same amount of solution. The solution made in the experiment was of 3mL, but in the article it showed that they used 10mL. Evaluation. The experiment conducted was under fair conditions. The plates were placed in all at once and taken out and examined all at once. The experiment had supported the hypothesis originally stated. However, the results were not consistent with other studies done by (Parkar SM, Thakkar P, Shah K 2013) where their 20% posted results of zone of inhibition. This may be due to error human error during the plating stages or a difference in method as they used 10mL of solution with different percentages of each. Improvements could be imposed for more appropriate results for future testing, such as timing how long each filter paper is soaked in solution or changing the solution concentration to a much larger volume to see full effect of solution.

Appendix 7.1 Zone of inhibition with different concentrations of mouth wash 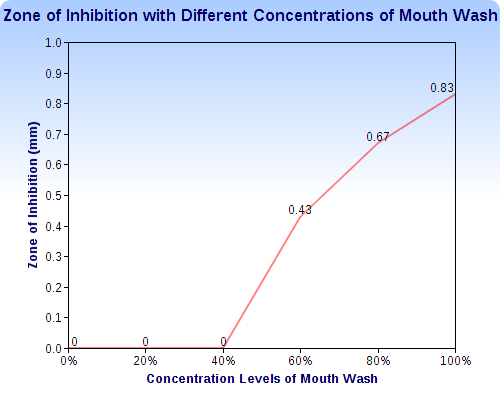 Figure 1, The zone of inhibition in relation with the alcohol concentration in the mouthwash. Figure 2. Raw data table

Dr. Harold Katz, 2014, Is the acid in your mouthwash eroding your tooth enamel? http://www.therabreath.com/mouthwash.html