Dysbiosis is recognized as a microbial imbalance on or inside the body like a damaged microbiota. It is the most generally known in gastrointestinal tract but also can take place everywhere with a defined mucous membrane such as skin flora and gut flora. The potential causes of dysbiosis are mainly induced from contaminated food or water and improper antibiotics dosage. For instance, taking antibiotics kills the sensitive bacteria but the resistant germs can also be left to grow and breed. There is significant information to show the dysbiosis of the gut microbiota is connected with the pathogenesis of extra intestinal disorders. The roles of gut microbiome in establishing brain development and neurological function, and the mechanisms that the gut microbiotic of dysbiosis contributing to two example of mental health disorders, depression and Irritable bowel syndrome are outlined. 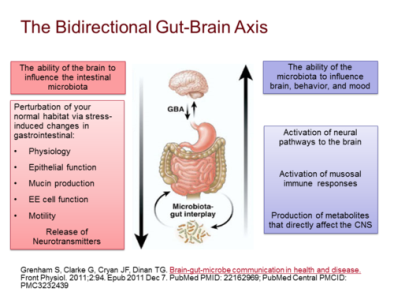 Figure 1. The bidirectional communication system between CNS and the gastrointestinal tract (Gut-Brain-Axis). The brain is able to influence the intestinal microbiota while the microbiota is capable to affect the brain development and functions, resulting in mental disorders.

The gut microbiota correlates with central nervous system which is vital for the brain development and functions. The bidirectional communication system between CNS and the gastrointestinal tract is called Gut-Brain Axis since the CNS is capable of constantly altering the gut permeability, microbiota configuration and secretion via the initiation of the hypothalamus pituitary adrenal (HPA) axis [7]. Moreover, Gut-brain-Axis is responsible to coordinate gut actions in order to associate the emotional centres of the brain with external intestinal functions like immune initiation, intestinal permeability and entero-endocrine signalling. Furthermore, the gut microbiota is involved in maintaining an equilibrium of homeostasis and providing protection against outer pathogens by activating the integration of defensive mucus lining of the gut epithelial cells. When the microbial gut is lake of balance, dysbiosis would be occurred and inflammation is prompted by intestinal permeability change and damaged gut barrier with the access of external antigens such as toxins, microorganisms and gluten to the interior. Additionally, a number of pathogens of diseases are expressed to interrupt the epithelial tight junctions to increase the intestinal permeability and lead to leaky gut so as to launch autoimmunological responses and induce neurological disorders like the depressive-like behaviours by altering gut microbiota composition.

Firstly, an example of the mental health disorder is Major Depressive Disorder (MDD) which is known as depression by minimum two weeks of low mood followed with declining of self-esteem. Depression-like alternations is examined in germ-free mice and indicated that the increased density of pro-inflammatory cytokines which is expressed in MDD 46 is resulted from the linkage with gut microbiome. Moreover, concentrations of serum antibodies countered to lipopolysaccharide (LPS) from gram-negative enterobacteria are greater in patients with MDD than in control individuals 51. Thus, it would induce stress-related disorders by increasing gut permeability and bacterial translocation 22, 52. Also, the altered microbiota configuration is suggested to promote depressive states and dysbiosis.

Figure 2. The comparison of a healthy gut and a leaky gut. Under homeostasis, the intestinal epithelial linked with the tight function to inhibit gut microorganisms, food particles etc. to go across the barrier.

The major neuroendocrine mechanism in human is the hypothalamic-pituitary-adrenal (HPA) axis and the activation of this axis stimulate various psychological stressors [130]. Additionally, the cells transfer the signaling molecules into gut lumen in the lamina propria which is under the regulation of the CNS, resulting in alternations in gastrointestinal motility and secretion and also the intestinal permeability in order to change the GIT system in which the bacteria existed in [2].

The mechanism of MDD linked with microbiota is evaluated by comparing the healthy gut and the gut with disease. From figure 2, the intestinal epithelium which is the largest mucosal surface in human body. It is used to provide an inhibition between the host and the environment and it is crucial in establishing the equilibrium of the organism with healthy condition. Under a healthy state, the intestinal epithelial associated with the tight function which prevent the undigested food particles from passing through and the absorptive cells fit close together with the mucus layer which can significantly act as a barrier to bacteria and antigens from outside. The reign of symbiotic microbiota, an intestinal barrier integrity is maintained and used to control pathobiont overgrowth inside the intestinal area and the function of a healthy gut establish the symbiotic relationship between CNS and gut microbiota. However, in the condition of pathological stress or disease, the epithelial barrier is damaged and the gaps between the cells are wider which leads to the increase of the intestinal permeability. Intestinal dysbiosis can negatively affect gut physiology causing improper brain-gut axis signalling and leading effects for CNS functions and disease conditions. Furthermore, stress linked with CNS can also influence gut function and contribute distress of the microbiota. An alternation in the balance of symbionts and pathobionts leads to pathobiont overgrowth and results in dysbiosis, allowing the channel for the translocation of pathological bacteria across the mucosal lining to sites where gives rise to the activation of an immune response recognized by increasing production of peripheral pro-inflammatory mediators and eventually the CNS, inflammation is initiated.

When the inflammatory activity is launched, macrophages leads to pathogenesis through unsuitable responses to enteric microbial activation, incapable elimination of microbes from host organisms, defective pro-inflammatory, anti-inflammatory responses and also deficit of barrier’s role. This contributes to the greater translocation of pathogenic bacterial constituent from the intestinal mucosa to the systemic circuits where they can stimulate innate immunity and generate pro-inflammatory cytokines, causing the systemic inflammation with an abnormal gut. Therefore, a leaky gut or impaired intestinal permeability is associated the GI dysfunction and the impaired CNS function to induce psychiatric disorders such as depression. The mechanism shows that depression affect the composition and stability of gut microbiota and also the bidirectional communication between microbiota and the CNS arouse stress reactions. 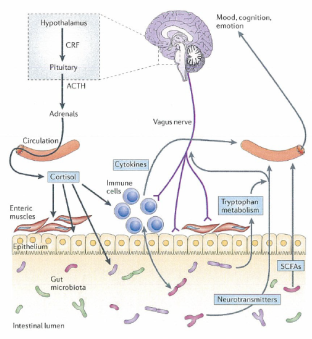 Figure 3. Pathways involved in communication between the gut microbiota and the brain including cortisol, cytokines, vagus and enteric nervous system.

The brain requires theses pathways to alter the composition of gut microbiota with the state of stress-related disorders. The HPA axis control cortisol secretion and cortisol influence immune cells involving cytokine secretion. Cortisol changes gut permeability and barrier function and hence alter the gut microbiota composition. Moreover, the gut microbiota and probiotics can change the concentrations of circulating cytokines and this affects brain functions. The vagus nerve and regulation of tryptophan contribute to the influence of the gut microbiota to the brain. Also, SCFAs are neuroactive bacteria metabolites that regulate brain and behaviour.

Secondly, another example of mental disorder is Irritable bowel syndrome (IBS) which is a stress-related disorder linked with Gut-Brain- Axis in order to alter gut microbiota characterization (Carroll et al., 2011) and increase intestinal permeability (Dunlop et al., 2006). Moreover, depression or anxiety anticipate IBS symptoms in the high frequency of patients and psychological characterization incline earlier healthy people to cause IBS after gastroenteritis.[27][28] (Singh et al., 2012). These stress responses in the body associate with the HPA axis and the sympathetic nervous system to perform abnormally in IBS patients.

It has a similar mechanism to the MDD and also adapt the HPA axis which modulate cortisol secretion and the cortisol influence immune cells involving cytokine secretion. Cortisol can alter gut permeability and permit bacteria or bacterial antigens to go through the epithelial barrier and this leads to mucosal immune response stimulated which can change the microbiome composition 131]. It is also indicated that a subtle impact on bacterial flora giving rise to greater adhesion and bacterial translocation owing to higher barrier permeability. Significantly, chronic stress damages the intestinal barrier, causing it leaky and raising the circulating level of immune modulator which is the element of bacterial cell wall called lipopolysaccharide (LPS) [134]. LPS transposition can switch on the inherited immune system and advancement of inflammatory actions to generate an autoimmune reaction such as the stress-related disorders. Additionally, the mechanism involves several molecules in the brain-gut-microbiota axis to induce physiological functions. The tryptophan metabolism is affected to brain function regulation which is induced by the gut microbiota (reviewed by O’Mahony ). Additionally, tryptophan is a crucial amino acid which is used to go through the blood brain barrier and involve in serotonin synthesis when the tryptophan is consumed from the gut. Furthermore, in the condition of pathogenic microbial infections in the gut, this pathway is triggered and the tryptophan from the body stock is depleted. Hence, this causes the deficiency of serotonin supply and result in IBS. Besides, the Short Chain Fatty Acids are known as butyrate, acetate, and propionate which act as signalling molecules and possess immunomodulatory characteristics. They cooperate with nerve cells by activating the sympathetic and autonomic nervous system through G-protein-coupled receptors.195 Furthermore, they can go across the Blood brain barrier to modulate brain development and behaviour196, 197, 198 in order to establish the IBS development.199 Besides, the serotonin, 5-HT, is a signalling molecule in the brain-gut-microbiota axis to regulate the intestinal permeability and use to stimulate sensory nerve to signal the CNS. Hence, this pathway involving different signalling molecules correlated with microbiota and initiated the leaky gut is significantly increase the risk of developing neurological disorder by dysbiosis.

In conclusion, dysbiosis increases the risk of developing mental disorders such as the Major Depressive Disorder (MDD) and Irritable bowel syndrome (IBS). Both disorders linked with microbiota and require the similar pathways. Dysbiosis with an impaired microbiota correlated with the CNS significantly. The Gut-brain-Axis is responsible to coordinate gut actions and deliver the stress response to the brain by the HPA axis in order to increase the intestinal permeability and damage the intestinal barrier. Followed by several signalling molecules such as tryptophan, 5-HT and SCFAs, the resulted leaky gut and alternation in microbiota composition would contribute to the depressive like behaviours and other neurological disorders. For the future perspective, the mental illness induced by the dysbiosis with altered microbiota can be monitored with appropriate probiotic supplementation and change of metabolomics condition in order to influence the essential changes with both gastrointestinal and neurological significance.