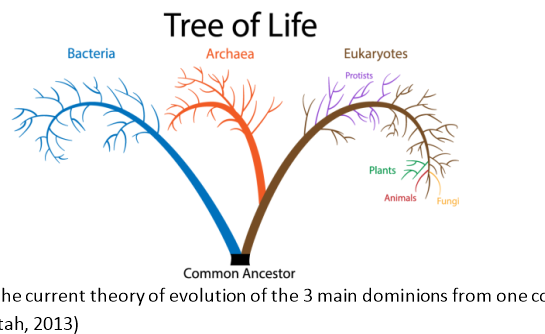 Archaea and bacteria cells are similar to each other in many areas of gross structure, which is why they have been classified under one encompassing name, prokaryotes, for a very long time. Both archaea and bacteria are roughly 1-5 μm (Hardin et al., 2011), compared to the far larger eukaryotes which are 10-100 μm (Hardin et al., 2011). It is due to this large size that eukaryotes possess a membrane bound nucleus containing it’s DNA, as well as other membrane bound organelles, to maintain the correct micro-environments for reactions to take place, for example high concentration of substrates and necessary pH to enable reactions within the cell. However as the name prokaryote suggests neither archaea nor bacteria have a membrane bound nucleus, containing its cyclic DNA loops, none of the prokaryotes other cell components are bound into organelles either. Both the prokaryotes and eukaryotes have cytoskeletons to help the cells perform their functions and enable movement. However prokaryotic and eukaryotic cytoskeletons are made of different things. In eukaryotes the microtubules are made out of α-tubulin and β-tubulin monomers, but the similar structure in the prokaryotes is made of FtsZ proteins. The network of mircofilaments in eukaryotes are made from G-actin, the counterpart to this in prokaryotes is the MreB protein. Prokaryotes use crescentin instead of Intermediate filaments, in eukaryotes the protein used varies depending on the tissue the cell is a part of. This is to allow the cell to differentiate and perform different function, something the generally unicellular prokaryotes do not have to do, however all eukaryote cell types have intermediate filaments made of nuclear lamins; lamin A, B and C, these are used to give shape to the nucleus. Neither Bacteria nor Archaea can perform endocytosis or exocytosis, whereas this is an essential function of the eukaryotic cell. Eukaryotic cells need to be able to transport molecules in and out of the cell on mass in order to build multicellular organisms that can have cells specialised for the creation macromolecules, which can be transported to the cells that use them in reactions within the body. The Prokaryotic cells divide by binary fission, while the Eukaryotic cells divide by either mitosis, in somatic cell to produce identical copies, or meiosis, to produce sex cell with half the chromosomes of other cells in the body. The main difference between binary fission and mitosis is that binary fission occurs faster as prokaryotic cells have no membranes surrounding their nucleus, and all substrates are free in the cytoplasm, so easier to copy and divide.

However due to their more recent common ancestor, archaea have some areas where they are more similar to eukaryotic cells than bacteria. The initiation of transcription and translation is the main area in which archaea are more like eukaryotes than the bacteria side of prokaryotes. With all prokaryotes the transcription and translation happens in the cytoplasm (figure 2). Due to the cyclic nature of the prokaryotes’ DNA, it is more easily accessed by RNA polymerase and therefore the transcription of DNA into mRNA is much simpler. However, in eukaryotic transcription happens inside the nuclear envelop and again the translation occurs in the cytoplasm (figure 2). The separation of translation and transcription, caused by the nuclear envelop, in addition to the histones on the linear DNA of eukaryotes make it harder for the transcriptions of eukaryotic DNA. Eukaryotes, and archaea, initiate transcription by RNA polymerase binding to the transcription factor, a group of proteins that bind to a specific sequence of DNA bases at the beginning of the section of DNA beginning copied. On the other hand bacteria initiate transcription by having the RNA polymerase bind to a promoter sequence in the DNA. The initiation of translation in bacteria relies on all components needed for initial translations to be present, these are; the 70s ribosomes, mRNA, the three initiation factors, GTP for energy and the first tRNA. Yet for the eukaryotes and archaea, initiation relies on the binding of proteins attached to the 5’-prime end of the RNA binding with the smaller subunit of the ribosome. In the case of the eukaryotes the smaller subunit is the 40s subunit and with archaea it is the 30s subunit. 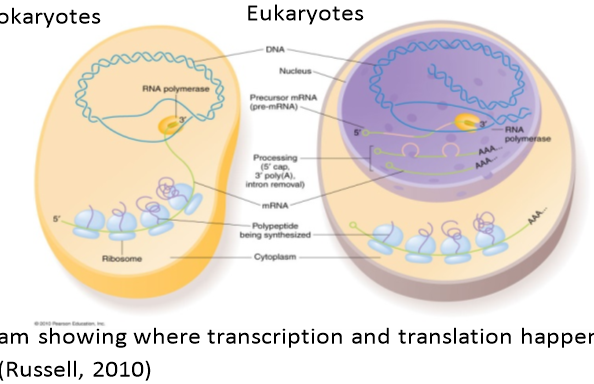 The more recently common ancestor between eukaryotes and archaea is also shown through archaeal cells simultaneously sharing similarities between bacterial and eukaryotic cells in some areas, one of these areas in their RNA polymerase. Bacterial cells only have one type of RNA polymerase, that catalyses all the RNA processing reactions, yet eukaryotes have three types of RNA polymerase. RNA polymerase I is used to make ribosomal RNA (rRNA), RNA polymerase II used to turn rRNA into messenger RNA (mRNA), and RNA polymerase III makes mRNA into transfer RNA (tRNA). This is due to the DNA being bound in a membrane forming a nucleus, as well as all the organelles being membrane bound, and therefore different RNAs needed for each step as the membranes cause barriers making it impossible for the DNA to go to the organelles it is required to affect. Although archaea do not have a true nucleus and therefore no need for these three different enzymes, because of their more recent ancestor with eukaryotes than bacteria, they too have all three types of RNA polymerase (Hirata and Murakami, 2009). Archaea have the same size ribosomes as bacteria but like eukaryotes they have more proteins. Both bacteria and archaea have 70s ribosomes, the ribosomes being comprised of a small 30s subunit and large 50s subunit. Eukaryotes on the other hand, have 80s ribosomes, comprised of a small 40s subunit and a large 60s subunit. All three cell types have a different number of associated proteins; bacteria have the least with about 55 of these proteins, eukaryotes have the most with 78 proteins, and archaea have roughly the mean average of the two types with 65 associated proteins. Bacteria and archaea both have circular chromosomal DNA, generally made of just one chromosome that is heavily folded; this is because they are not membrane bound, whereas eukaryotes have lots of different linear chromosomal DNA. Eukaryotes have histone proteins associated with their DNA. Like eukaryotes, archaea have histones associated with their DNA. Histones have been found in three of the archaea genera to provide structure and stability through simple histone folds to the DNA and to provide binding properties. Although bacteria also have associated proteins to provide heat stability to their DNA, they have very few and are generally quite simple, most often they are histone like proteins call HU proteins. The main use of these HU proteins is the same as histones, and they are used to stop DNA supercoiling and regulate the replication of DNA by initiating the replication of DNA (Oberto and Rouviere-Yaniv, 2001).

Eukaryotes, archaea and bacteria are all dissimilar from each other in some aspects of their cellular structure. These differences are what make each type of cell part of a certain domain. One area where all the cell types vary is their cell walls; all bacteria have a cell wall made of peptidoglycan, peptidoglycan is a polymer made of ‘glycan backbone with alternating β1-4-linked residues of N-acetyl-D-glucosamine and muramic acid’, (Stewart-Tull 1980). Only some eukaryotes have cell walls, but they are all considered eukaryotes because most other structures in the cells are the same. Plants, fungi and algae, a type of protoctista, are eukaryotes that have cell walls. Plant and algae cell walls consist of cellulose, a polysaccharide of β-glucose, fungi cell walls are made out of the polysaccharide, chitin, it is also made of N-acetylglucosamine, but unlike bacterial cell walls, it does not contain muramic acid. Archaea cell walls vary from protein based to more like bacterial cell walls, made of a peptidoglycan type substance, depending on which archaea it is. Methanopyrus, a genus of archaea, use L-talosaminuronic acid as a pseudomurein to make their peptidoglycan like cell wall, as they lack actually murein to make muramic acid, a key component of a true peptidoglycan cell wall (Kandler and König 1998). The amount of processing that RNA undergoes varies between all three as well. Eukaryotes and archaea have more RNA polymerase and therefore already undergo more processing than bacteria. Bacteria only have one RNA polymerase, and therefore their RNA undergo a lot less modification, archaea has RNA polymerase more like the eukaryotes, and this is because they preform eukaryotic transcription and translation. However despite archaea and eukaryotes having the same number of RNA polymerase types, eukaryotic RNA go through more modification than archaeal RNA. This is because after being synthesised by RNA polymerase II, eukaryote mRNA, then goes through capping, polyadenylation, and splicing. These different variation of RNA processing are due to each cell type having their own ribosomal RNA, therefore each cell has a different way of processing its rRNA during DNA transcription and translation.

The only similarity between bacteria and eukaryotes is their membrane phospholipids. Both eukaryotes and bacteria make their membranes with glycerol-3-phosphates and linear fatty acids. However archaea use glycerol-1-phosphate, an enantiomer of glycerol-3-phosphate (figure 3), and branched isoprenoids. Archaea use glycerol-1-phosphate, because they use the L stereoisomer of glycerol to build the glycerol phosphate backbone of the phospholipid (Waggoner and Speer, 2001). 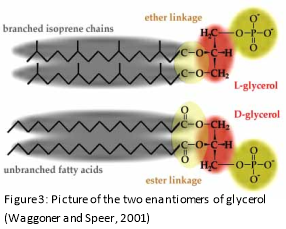 Through research into the topic of differences between eukaryotes and prokaryotes, I have briefly discussed the main areas in which they contrast. I have also started to show that all cells preform some of the same basic tasks, despite having different structure and reaction pathways to do it. Furthermore I have begun to show that even within the board classification of prokaryotic and eukaryotic cells there are some differences, even within the classifications themselves, an example of this is the presence or absence of a cell wall. Where both prokaryotic cell types, archaea and bacteria, have a cell wall, only half of eukaryotes, plants and fungi, also process a cell wall. With the cells that have a cell wall, there are also contrasts in what they make those walls out of. It is these contrasts between eukaryotes and prokaryotes, as well as those differences found further down the classification hierarchy that give rise to the diversity of life and enable the organisms made from these different cell types to thrive within their niche environment.

Oberto, J. and Rouviere-Yaniv, J. (2001) Does the parallel evolution pattern between the replication-segregation proteins and HU have a biological significance? Biochimie, 83 (1): 61.

The University of Utah (2013) Life in Extreme Environments. [Online]. Available from: http://learn.genetics.utah.edu/content/astrobiology/environments/.

Waggoner, B. & Speer, B. (2001) Archaea: Morphology. [Online]. Available from: http://www.ucmp.berkeley.edu/archaea/archaeamm.html.