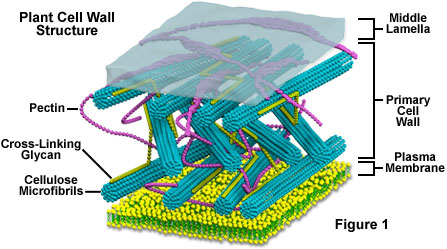 The cell, a complex yet basic part of our existence. Unlike humans, one of the most important parts of a cell for a plant cell is the cell wall. The cell wall gives the plant shape, strength, and enables communication to adjacent cells. This essential portion of the cell was initially found by Robert Hooke, though he named it simply “wall”. Other scientists, such as Karl Rudolphi and J.H.F Link, added to Hooke’s finding. What they found was that cells had their own individual walls, and that cells interacted through holes, later named the plasmodesmata. Before this discovery, it was thought that cell walls encircled large masses of cells, and that was the way that cells interacted.

There are many different arrangements for cell walls, and certain parts (such as the secondary cell wall) do not show up in different types of cells. The most basic cell wall consists of two main layers, with the plasma membrane directly beneath it. The first layer is known as the Middle Lamella. This is the outermost layer of the cell wall. This layer mainly consists of a large amount of pectins, along with many other parts. The middle lamella is responsible for gluing the walls of two adjacent cells together, providing the stability to create plasmodesmata between the cells. The primary cell wall is mainly made up of cellulose microfibrils, which are what provide the structure and shape of the cell wall. This layer is also made up of little bits of hemicellulose, which is a polysaccharide responsible for adding extra strength to the cellulose microfibrils. If you happen to have a cell that does have a secondary cell wall, it is there to add extra rigidity and strength, so the cell likely would belong to a larger plant. This layer is primarily cellulose, lignin, glycoproteins, and polysaccharides. This layer also has three other layers (S1, S2, and S3). These layers each have more cellulose microfibrils that alternate in directions. These parts of the secondary cell wall are what allows trees to exist. As wood cell walls mainly consist of secondary cell walls, which provide the structure that they need to stand up against gravity.

Cell walls are formed in an odd way. The middle lamella is laid down first, which originates from the cell plate during cytokinesis. In other words, the middle lamella is formed while the cell is splitting off from the mother cell, after the nucleus has split into two. The primary cell wall is then inserted into the middle lamella. The cellulose microfibrils, located in the primary cell wall, are created in the plasma membrane by a process known as cellulose synthase complex. This process is not fully understood, but it is thought that all cellulose-synthesizing organisms have cellulose synthase proteins, which are catalysts for the polymerization of glucan chains. This essentially all boils down to the cellulose synthase proteins kick starting the reaction that allows for the glucan chains to become cellulose.

The way that I have designed my model of the cell wall, is I have spent about 5 hours going through iteration upon iteration in CAD. When I finally decided on a simplistic, yet fully informational model, I exported all the 3D models as an STL (or stereolithography file), which is a dot-matrix of the solid. My slicer software (Cura 15.04.6) then took the file, and turned it into a series of coordinates, and other commands (such as the temperature to heat up the print nozzle/bed & the print speed & extrusion rate). This file I then exported this file to my SD card as a .gcode file, which my 3D printer is able to understand. The SD card was then plugged into the printer, and printed. Overall, I exported 3 different .gcode files (one for the cellulose, and two others for the middle lamella and plasma membrane) as they all wouldn’t fit on the build plate as a single print. All three prints took me about 4 hours combined of print time.

The way that I designed my main plant cell model was similar to this, but also very different. The first thing that I had to come up with was my wiring diagram, which consisted of me figuring out what value of resistor I needed to not let the 9v battery blow out my LED’s (every color of LED requires a different value of resistor), and how I would wire everything. I then had to design the cell in CAD. The wiring diagram probably took me about an hour, as I was trying to lay everything out the most efficient way possible on a mockup of my proto-board (done in circuit design software). I then spent about 10 hours total designing each individual part in CAD (I also ordered all the parts and got them 2 day shipped). Once all the parts arrived, I was just finishing up with the CAD, so I started the prints on the parts (the base board alone took 3 hours as I set it to a higher infill (50% instead of 10%) as I wanted it to be more substantial, and sturdy. The other parts took about 4 and a half more hours to print (I printed excess of the organelles in case one broke while drilling).