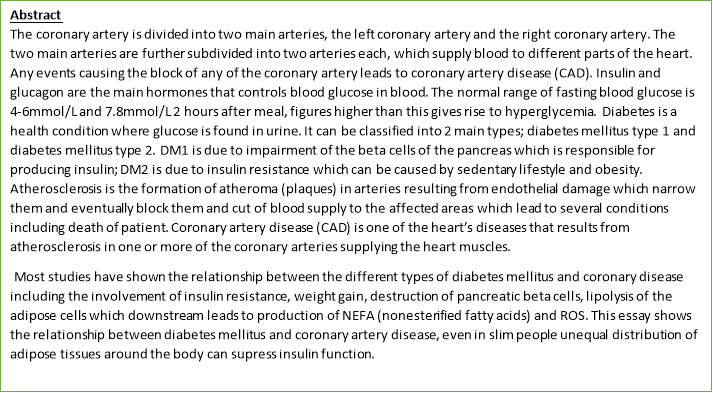 The normal blood glucose range is 4-6 mmol/L and 7.8mmol/L 2 hours after meal. This range is controlled by insulin which causes cells to absorb excess glucose in blood and glucagon which causes cells to release glucose from stores. Insulin is produced by the beta cells of the islets of Langerhans of the pancreas. When blood glucose level rises above its normal range insulin binds to the extracellular subunits of its receptors (IRS-1 and IRS-2) on the cell surface which sends signals into the cell causing the intracellular proteins to alter their activity which in turn initiates the movement of glucose transporters (GLU1-4, depending on the cell/tissues involved) to the cell membrane which then transports glucose into the cell where it may be further be converted glycogen, the storage form of glucose. Any impairment to the function of insulin, or its receptors lead to hyperglycemia and when excess of this glucose in bloodstream is passed in urine it results to diabetes mellitus. Diabetes mellitus can be classified into two main types; Diabetes mellitus type 1 (DM 1) and diabetes mellitus type 2 (DM 2). High sugar levels in blood (hyperglycemia) maybe due to insulin resistance in cases of type 2 diabetes or destruction of beta cells of the pancreas in cases of type 1 diabetes, which downstream leads to CAD.

Atherosclerosis which can occur in any part of the body result from endothelia damage which can be caused by high blood pressure, smoking, genetics, age, gender, high blood glucose, weight gain etc. when atherosclerosis occurs in any of the coronary arteries it leads to coronary artery disease. Events leading to atherosclerosis include; Endothelial damage which leads to inflammatory responses such as accumulation of white blood cells , low density lipoprotein (LDL)and high density lipoprotein (HDL), oxidation of LDL induced by free radicals (reactive oxygen species), platelet aggregation, chemotaxis of macrophages, formation of foam cells, proliferation of smooth muscle cells (atheroma occurs), fibrous tissue and calcium salts cause the atheroma to harden this results in less elasticity of the artery (atherosclerosis). All of these events narrow the coronary artery from the normal physiological range of 0.6-4.4mm (including small coronary arteries branching from the main arteries) to very smaller diameter depending on the level of narrowing and then eventual blockage preventing or limiting blood and nutrient supply to heart tissues leading to death of affected heart tissues, heart attack or even death of the patient.

According to statistics, diabetes and coronary artery disease are closely related, this is because 50% of patients with diabetes are at risk of suffering CAD alongside. In the United States 77% cause of death is diabetic CAD. The prevalence of diabetes globally is increasing and it’s the major risk factor of other health conditions. The National Institute of Health reported that 65% of diabetic patients are more at risk of developing stroke, high blood pressure, obesity, kidney failure, and heart diseases such as cardiac arrest, myocardial infarction, and atherosclerosis in the heart (CAD) which when not optimally managed could lead to death.

The cause of DM1 is unknown but studies say it could be genetic or viral infection which leads to an autoimmune condition where the body defense mechanism destroys its cells, in this case the pancreatic beta cells where insulin is produced. When the beta cells of the pancreas are destroyed, the pancreas will no longer be able to make insulin which downstream causes the bloodstream to be glucose logged due to inability of the body cells to move glucose out of the bloodstream, leading to impaired insulin secretion, decreased signalling in the hypothalamus, increased food intake, weight gain and hyperglycemia, which downstream leads to atherosclerosis.

DM 2 is due to the body cells’ inability to respond to insulin stimulation. Insulin resistance is due to obesity, age and sedentary life style (irregular body activities), Age and sedentary lifestyle both lead up to increase in body weight (accumulation of adipose tissue). With or without hyperglycemia, insulin resistance can cause atherosclerosis, this results from increased lipolysis of adipocytes leading to increased nonesterified fatty acid secretion (NEFA), pro-inflammatory cytokines such as tumour

necrosis factor-a (TNF-a), interleukin-6 (IL-6) and monocyte chemoattractant protein-1 (MCP-1). NEFA can be deposited in and cause dysfunction of pancreatic beta cells, liver and skeletal muscles, all of which enhance insulin resistance and reduce production of insulin. Accumulation of NEFA in skeletal muscle leads to competition with glucose for substrate oxidation thereby increasing the intracellular content of fatty acid metabolites such as diacylglycerol (DAG), fatty acyl coenzyme A and ceremide which together activate serine/threonine kinase processes leading to insulin receptor substrate 1and 2 (IRS 1 & IRS 2) phosphorylation, reducing their ability to undergo tyrosine phosphorylation and carry out their normal physiological function in insulin signalling.

The final target of these receptors is the blockage of phosphatidylinositol 3-kinase (PI3) which is responsible for decreasing expression of adherent molecules, NF-kb activation, Ros formation and increasing eNOS production. PI3 blockade leads to hyperstimulation of mitogen-activated protein kinase (MAP-kinase) by increasing insulin production which contributes to vascular hypertrophy, hypertension, increased plasminogen activator inhibitor-1 (PAI-1) production and arrhythmias, all of these processes lead to endothelial lining damage which causes atherosclerosis.

Hyperglycemia can also lead this atherosclerosis because increase in blood glucose levels leads to increase in reactive oxygen species (ROS) because of mitochondrial dysfunction which is the initial event observed in hyperglycemia. Glycolysis generates nicotinamide adenine dinucleotide (NADH) and pyruvate. Pyruvate in tricarboxylic cycle (TCA) generates molecules of CO2, 4 NADH and 1 FADH NADH and FADH are electron carriers/donors in the electron transport chain which is made up of 4 complexes, I-IV). In mitochondria, NADH and FADH donate electron for generation of ATP. In hyperglycemia, there is increased glycolysis which leads to increased electron donation to the electron transfer chain (ETC) which increases electron flux raising voltage across the membrane and generates higher membrane potential eventually reaching a threshold where transport at complex III is blocked, increasing electron donation to O2 at complex III generating ROS, mostly superoxide (O-). Superoxide inactivates glycolytic enzymes glyceraldehyde 3-phosphate dehydrogenase which induces vascular injury via 4 main pathways; protein kinase C pathway, hexosamine pathway, advanced glycation endproducts and polyol pathway.

Diabetes and Response to injury

Endothelial progenitor cells (EPC) and vascular endothelial growth factor (VEGF) are responsible for response to injury and hypoxia, both are lacking in diabetes, this makes repair of injury very slow enhancing atherosclerosis.

With or without hyperglycemia, DM leads to atherosclerosis which if it happened in the coronary artery lead to narrowing and eventual blockage of the coronary artery leading to CAD. In DM 1 it goes through hyperglycemia/mitochondrial dysfunction pathway whereas in DM 2 it goes through insulin resistance/lipolysis pathway even in slim individuals if there is unequal distribution of fat across the body, it interferes with insulin’s ability to suppress lipolysis leading to higher NEFA production. Whichever way, DM is likely to lead up to CAD (when atherosclerosis occurs in the coronary artery) and other diseases such as obesity, high blood pressure, kidney disease and heart attack. One thing that can be seen in the events leading up to CAD are positive feedback events, for example, ROS blocks eNOS synthase which enhances the production of more ROS.