The main function of Erthrocytes is the transportation of oxygen to the bodies cells and tissues and expulsion of carbon monoxide to the lungs. Its bi-concave shape increases the surface area which increases the speed of diffusion, enabling it to receive and release oxygen more effectively. Their small size and ability to change shape helps them fit through the various blood vessels, all of these structures aid Erthocytes to complete their function.

The function of Spematozoa is to fertilise a female ovum during/after sexual intercourse. A pointed tip in the head of the sperm allows it to effectively enter the ovum. The middle of the sperm, is very short and after ejaculation, it releases mitchondria to give the spermatozoa bursts of energy. The tail, moves the sperm by using whip-like, movements, allowing speed/movement necessary due to it’s.short life span. If a sperm is successful in reaching an ovum, the cell divides, disposing of the tail. All of these structures aid Spermatozoa to try and complete their purpose.

Cilliated epithelial cells are tiny hair like structures on the surface of a cell, their function is for transportation. The structure allows the hairs to produce a synchronised swaying motion, transporting fluids or unwanted particles such as mucus to the back of the throat to be disposed of.

Cell membranes consist of a Phospholipid Bilayer, this forms the initial shield of the cell. Due to the various components of a membrane they are referred to as mosaic. Within the Bilayer there are both lipids and proteins. At body temperature, Phosolipids have a consistency of an oil like substance that allows plasma membranes to be flexible and fluid. They can attach and detach to cells. Phosolipids have a hydrophillic head and a hydrophobic tail and in each cell the head forms the outer layer of the membrane, while the tail is wedged in-between the cell to form the bilayer. Intrinsic proteins, cover the complete span of the Bilayer and Extrinsic proteins are partial embedded within the bilayer. Cholesterol lipids also help strengthen the bilayer, while regulating the activity of some integral proteins. Therefore, it can correctly be said that a cell membrane is a fluid mosaic model made up of lipids and proteins molecules. 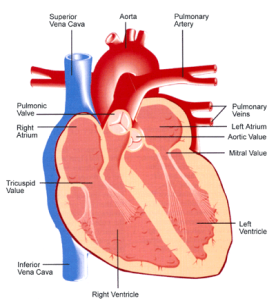 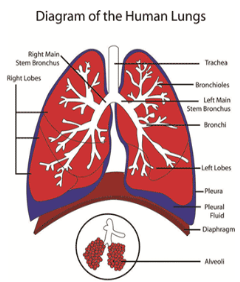 Both the heart and the lungs interact and play a crucial role in the respiration and cardiovascular system. During respiration, oxygenated blood, which is inhaled from the lungs is passively diffused to the heart which then pumps it out to the rest of the body. It is absorbed into tissues and cells. De-oxygenated blood returns to the heart, after which it is sent back to the lungs to get further oxygen and to release carbon dioxide through exhaling. Due to the lungs tissues being thin, it allows easier diffusion to the blood and therefore smoother respiration. Although the cardiovascular system mainly involves the heart and blood , as oxygen from the lungs is transported via the blood stream, both organs also play a vital roles within it, in order to maintain life.