This assignment is about is the climate change in Holocene period the most important cause of the development of agriculture and I will discuss others area as well like people and plants. The three areas I have chosen to discuss is East Asia, Sub-Saharan Africa and America.

Agriculture is the cultivation of animals, plants, fungi, and other life forms for food, fiber, biofuel, medicinals and other products used to sustain and enhance human life. Agriculture was the key development in the rise of sedentary human civilization, whereby farming of domesticated species created food surpluses that nurtured the development of civilization.

For a large food production through leaving of hunting and gathering because the animal is killed, which cannot reproduce and for agriculture it will continue to produce by nature. People have been forced to agriculture because they think it is more labour intensive than hunting and gathering, and they had no alternative. It has been developed because of people desire by wanting special status foods, which is what the social need and want to generate our lives by competition with other that normal will produce power by having desire for new statuses and new things.

The demographic theory suggested that people need to adopt agriculture follow by the end of the ice age and the rise in world population. Agriculture did not start during the Pleistocene because the cold, glacial climate was not favourable to it. Agriculture was impossible in the Pleistocene ice age because the climate was extremely cold and dry, containing higher levels of carbon dioxide, and varied greatly sometimes in periods of a decade or less. (Scarre, D. 2013, p186) 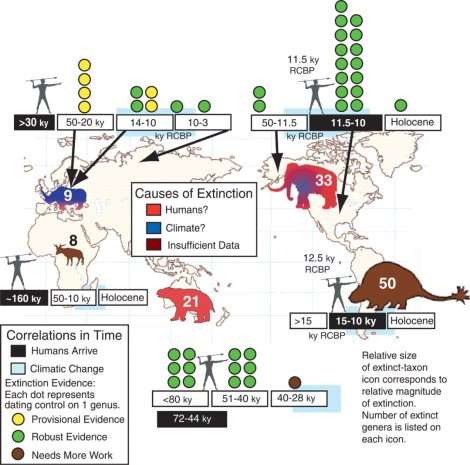 Figure 2: Summary of the numbers of megafaunal genera (Perspectives in (human) ecology, 2007)

The Holocene death includes the disappearance of megafauna, which is the end of the Ice Age that, starting between 9,000 and 13,000 years ago. This may have been due to the loss of the mammoth that had maintained grasslands that became birch forests without the mammoths. The new forest and the resulting forest fires may have induced climate change. Such disappearances might be the result of the proliferation of modern humans which led to climate change.

The world is getting warmer by the temperatures has risen upon an average 2 to 5 oC and the Arctic sea ice is getting less, which will cause a rise in sea level. Holocene Climatic Optimum is describing the earlier southern warm period, which is between 8,000 to 10,500 years ago that was immediately following the end of the last ice age. (Scarre, D. 2013, p177) 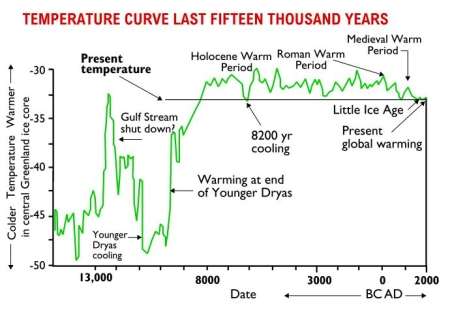 The key reason on agriculture developed is the relationship between human and the environment which is suggested by Oasis theory. The climate became warmer, causing vegetation to increase and shift from one type to another. People adapted to this by changing the foods they ate and altering their lifestyle. Many people began to domesticate plants and animals at this time, both as a direct and indirect response to climate change, thus the origin of agriculture. (Scarre, D. 2013, p186)

End of Ice Age the climate changes, which the human response is established to save Antarctica by every land of the globe for agriculture that the human societies increasingly prolific and new forms of social and economic activity developed.

In 8,000 years ago, Northern China has been the domestication centre for foxtail millet and broomcorn millet, these are the species that they have produced and in 7,500 years ago these species is widely cultivated in the Yellow River basin. Later on in Southern China rice was domesticated and in Northern China 5,000 years ago, they domesticated soybean, then around 2,500 BC orange and peach has originated in China. The climate change has an impact in China, which created higher rainfall and warm temperate forest belts. (Wikipedia, 2014)

Our synthesis indicates that the climate in the marginal region was slightly moist in the early Holocene, wettest in the middle Holocene, and dry in the late Holocene, though there are regional differences as reflected by vegetation change. This general pattern is very different from either monsoon- or westerly-dominated regions.

The maximum moisture occurred during the early Holocene in the monsoon region, while the arid central Asia dominated by the westerlies was dry in the early Holocene and wettest in the mid-Holocene. The interplay of the Asian summer monsoon, westerlies, topography and regional vegetation factors might have contributed to this spatial complexity.

It is hard for people to stop hunting and gathering to change it to agriculture because there are forms of wild and animal to be domesticated. This intensive gather together of a very limited number of species just by hunting and gathering. “This transition from gazelle hunting to sheep and goat herding, where it seems that gazelle never were brought into the domesticated category and that when domesticated animals come into use it’s actually replaced by sheep and goat.” (Watkins, T, 2014).

In Africa agriculture have been they cultivated for millennia came after their domestication elsewhere. The re-domesticated in Africa 5,000 years ago in a place called Papua New Guinea they have domesticated taro and Asian yams.

African Humid Period is a wetter period of time due to a strengthening of the African monsoon by changes in summer radiation, which is between 16,000 and 6,000 years ago. In Green Sahara during this period, it has produced numerous of lakes by the rainfall of nature that have contain the wild animal of crocodiles and hippopotamus fauna, this is caused by climate change, it has an effect on the species of agriculture and animal.

South Africa’s southern coastal margin is recognised as being a highly dynamic climatic region that plays a critical role in both regional and global atmospheric and oceanic circulation dynamics. Our understanding of the past dynamics of this system, however, has been limited by the number and nature of datasets available that can be used to infer changes in key climatic parameters in the region.

Combined, a negative relationship is apparent between temperature and humidity in this area of the southern Cape, and these changes can for the first time be clearly linked to variations in Antarctic sea-ice extent and shifts in the southern westerly storm track. This dynamic is a reduction in sea-ice extent and a southward shift of the westerlies are manifested regionally by increased temperatures and a phase of marked aridity.

In early 8,000 to 6,000 BC in Mesoamerica has domesticated is corn, beans and squash, but the beans came later on in 4,000 BC, also South America has domesticated potatoes and manioc. Around 2,500 BC they have grown sunflower, sumpweed and goosefoot in America. People in this regional most of them relied on hunting and gathering for millennia, which farming life have not been developed until the second millennium BC. (Wikipedia, 2014)

The first peak of the warmth in North Amercia from 11,000 to 9,000 years ago when the Laurentide ice sheet is still chilled, then 4,000 years later it has experienced warming, which the temperature suddenly rises and the ice sheet slowly melt.

Three other factors must be added to this is complex solar cycles, Earth’s orbital variations, it also called Milankovitch cycles, which occur over intervals of tens to hundreds of thousands of years, and different rates of change and climatic conditions depending on location.

The retreat of the continental glaciers of the Wisconsinan stage began in central North America around 10,000 years ago, but it did not occur in northern Canada and Alaska until nearly 6000 years ago. The retreat has yet to occur in Greenland. Sea level rise from the melting of the glaciers affected coastal areas globally, so much so that in the late 1800s, some scientists believed that this sea level rise should be the defining characteristic of the Holocene.

For this report question I agree with it that I think the development of agriculture is the beginning Holocene period the climate change, which has an affect the globe by the temperature have been rise that have caused the ice sheet slowly melt, which will cause the sea level rise and it has produced warmer and wetter weather. This is a great time for develops agriculture because to grow food from the ground, it need water, which is the rain and sun, which make the earth warmer. It is the most important cause of agriculture to production more different types of food and the large species is disappearing by the climate change, this mean animal is dying by an animal not produce enough to keep a life in this period and condition of the environment is not suitable for them.

Scarre, C., 2013. Chapter 5 The world transformed: from foragers and farmers to states and empires. In: C. Scarre, ed. The human past. London: Thames and Hudson Ltd, pp.189.

Scarre, C., 2013. Chapter 5 The world transformed: from foragers and farmers to states and empires. In: C. Scarre, ed. The human past. London: Thames and Hudson Ltd, pp. 177.

Scarre, C., 2013. Chapter 5 The world transformed: from foragers and farmers to states and empires. In: C. Scarre, ed. The human past. London: Thames and Hudson Ltd, pp. 186.