One in six couples in the UK will experience problems achieving a pregnancy at some point in their reproductive lifetime. (National Infertility Awareness Campaign (NIAC), 1998) Infertility is defined as the inability of a reproductive age woman to conceive “after 1 year of unprotected vaginal sexual intercourse.” (NICE, 2013) It is known that only a quarter of couples experiencing delays in achieving pregnancy seek advice. (Kerr et al 1999) A number of factors affect a couple’s inability to achieve pregnancy including: male factors, such as low sperm count and poor quality sperm; female factors, such as tubal blockages, ovulatory dysfunction (polycystic ovary syndrome PCOS), endometrial dysfunction, pelvic conditions such as endometriosis (Falconer 2013), and poor gamete or embryo quality (S Zhang 2013), coital problems, and unexplained infertility.

In addition to these causes known to interfere with fertility there are other causes yet to be described. A summary of the main causes of infertility in UK couples is shown in figure 1. 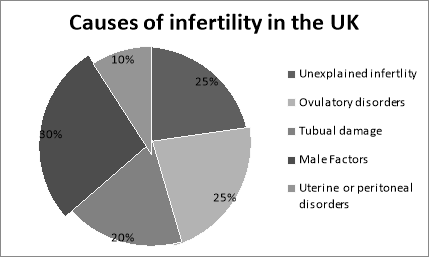 Figure 1 – A graphic summary of the causes of infertility in the UK as outlined by NICE guidelines (Feb, 2013).

There are numerous medical treatment options for couples diagnosed with a specific cause of infertility. These treatments can be used to restore fertility or bypass the problem causing infertility resulting in pregnancy. Medical treatments include minimal invasive surgery (MIS) for the treatment of endometriosis (REF), application of ovarian hormones for anovulatory disorders such as PCOS (Luciano et al 2013), and assisted reproductive technology (ART). The latter encompasses a spectrum of assisted contraception techniques including in vitro fertilisation (IVF), intra-uterine insemination (IUI) and embryo cryopreservation.

Uterine factors, which play a significant role in conception and embryo implantation, have been described to be responsible for 25% of UK infertility cases, as shown in figure 1 .(NICE, 2013) Major uterine abnormalities including, ____ (REF) and physical abnormalities such as distorted uterine cavity, polyps, adhesions or fibroids contribute to an infertile diagnosis as they impair conception and implantation. (Fowlkes et al 2000) The prevalence of these major uterine abnormalities has been described as 5% in the general population and 10% in women that suffer from recurrent miscarriage. (Taylor & Gomel et al 2008)

Endometrial receptivity is one of the main factors in determining fertility. (REF) The endometrium undergoes morphological changes in preparation for embryo implantation and the establishment of pregnancy. These morphological changes are essential for successful implantation of an embryo and are closely regulated by sex steroid hormones as part of the cyclic menstrual cycle.

Although symptoms can vary, a universal symptom of endometriosis is pelvic pain, which can vary in intensity and location from patient to patient dependent on the position and severity of endometrial lesions. Diagram 2 shows the most common locations for endometrial lesions to develop. Symptoms associated with pelvic pain include menstrual pain (dysmenorrhea), pain during intercourse (dyspareunia), and frequent urgent and sometimes painful urination (dysuria). (REF) Other symptoms associated with endometriosis include pelvic inflammation and scar tissue formation. (REF) 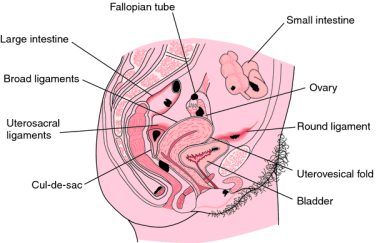 Figure 2 – A diagram of the most common locations for endometrial lesions to form (McKinney et al., 2000)

Women with endometriosis often suffer from infertility. This can causally be explained by the anatomical symptoms of the condition; inflammation, scar tissue and adhesion of pelvic organs to each other through fibrous band formation. (REF) However, women with limited endometriosis also exhibit infertility and it has been suggested that the presence of inflammatory markers and factors released from lesions may be detrimental to gametes or early embryos. (REF). Another cause of infertility has been described as being caused by resistance to the actions of progesterone. A study by Bulun and colleagues in 2006 found that progesterone resistance is primarily due to a significant reduction of PRs, with PR-B undetectable and PR-A strikingly lower, in the endometrium of endometriosis patients compared to their fertile counterparts. (Bulun et al 2006)

Although there is no cure for endometriosis there are a number of treatments available to patients. This includes the application of ovarian hormones; to stimulate ovulation, MIS; to remove problematic lesions causing a blockage or inflammation preventing conception (REF), IVF or IUI. Surgical treatment of endometriosis has been shown to approximately double the fecundity of patients. (REF) The combined use of hormonal stimulation and IUI has been shown to be effective in enhancing fertility. (REF)

1.3 Structure and function of the Endometrium

A healthy uterus is a small pear shaped hollow organ with muscular walls. The outer serosa made up of the peritoneum, the middle muscular myometrium and the inner mucosa, the endometrium. (Wilborn et al 1983) When a woman reaches reproductive age the endometrium cyclically changes under the influence of steroid hormones. The fundamental role of the endometrium is to establish and maintain pregnancy in response to an invading embryo. If implantation does not occur dynamic remodelling of the endometrium occurs resulting in menses and a new cycle. (Tabibzadeh, 1996) Disturbances to this system lead to dysfunctional menstruation and infertility.

Endometrial receptivity is the main determining factor in fertility. The endometrium undergoes specific morphological changes in preparation for the implantation of an embryo. The endometrium consists of the basal lamina, uterine glands, spiral arteries, a specialised rich connective tissue layer (the stroma), and a single layer of cuboidal epithelial cells (REF) The stromal layer mainly consists of fibroblast like cells, stromal cells, that undergo morphological transformation to decidual cells during the mid-secretory phase of the menstrual cycle.

The menstrual cycle begins with the menstrual phase (day 1-5) which begins on the first day of menstrual bleeding. This phase is followed by the follicular phase (Day 4-14) when the secretion of estradiol by the growing ovarian follicle causes proliferation of the endometrium. During proliferation the glandular epithelium and stroma undergo intense mitosis; the glands grow larger and the spiral arteries wind themselves into the thickening tissue. The follicular phase ends on day 14 when the estradiol peak triggers a positive feedback mechanism at the level of the pituitary and ovulation commences 35-44 hours after the initial LH increase (Jimenezz-Ayala et al 1998). The final phase of the menstrual cycle is the secretory phase when the endometrium differentiates under the influence of increasing progesterone levels.

Stromal differentiation occurs approximately 9-10 days after ovulation and the endometrium reaches full maturity. During this phase it is receptive to implantation by an invading embryo with maximal receptive ability occurring between days 20 and 23, this is termed the window of implantation. In the absence of embryo implantation the corpus luteum lowers the levels of circulating estradiol and progesterone, leading to the endometrium becoming unstable, breaking down and being expelled, beginning the cycle with the menstrual phase once again. 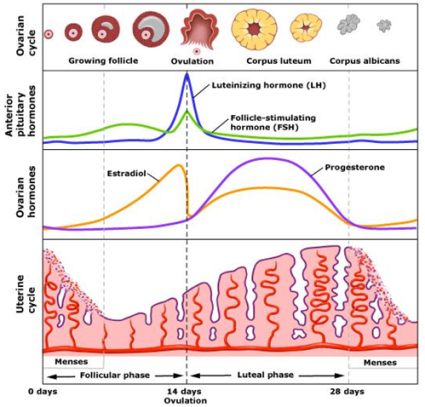 The stroma undergoes decidualization in preparation for subsequent embryo invasion. Decidualization is the process by which endometrial stromal cells undergo morphological changes in preparation for embryo implantation. It is defined as the differentiation and proliferation of fibro-blast like mesenchymal cells in the endometrium to a decidualized cell which is morphologically and biochemically distinct. (Tang et al 1994, Salamonsen 2003) Stromal cells primed by estrogen differentiate to decidual cells under the influence of progesterone. (Simon et al 2009)

Stromal decidualization begins near the spiral arteries and is essential for embryo implantation to be successful since the decidua is permissive for trophoblast invasion and the same time impedes the invasive trophoblast by forming a physical barrier. (Kilman et al 2000) The secondary messenger cAMP is vital for the decidualization process (REF) as it appears to prime the stromal cells to the actions of progesterone and the PR and protein kinase A pathways are absolutely required for decidualization. (Gellersen Brosens et al 2003)