Parkinson’s disease is a condition where the brain over many years progressively becomes damaged by a loss of nerve cells in part of the brain (as shown in figure 1). The main symptoms of Parkinson’s disease are mainly relational to motor movement; a person with Parkinson’s disease may have involuntary shaking of specific parts of the body known as tremor, muscle stiffness which causes everyday tasks to be very difficult such as getting up from a chair known as rigidity and physical movements to become very slow such as walking known as bradykinesia.

It is thought that Parkinson’s disease affects 1 in 500 and the average age for the symptoms to occur is around 60 with rare cases of 1 in 20 cases where it has developed in people aged under 50. It is thought that there are currently 127,000[1]people in the UK alone with the condition and men are more likely to get Parkinson’s than women. Unfortunately there is currently no cure for the disease. 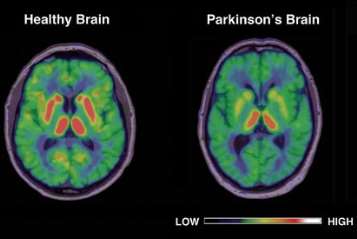 Brain activities shown in a healthy brain in compare with someone with Parkinson’s disease brain.

Since motor symptoms of the disease are due to lack of dopamine in the substantia nigra[8] which is the part of the brain which gets damaged progressively over many years; Levodopa is a psychoactive drug (able to cross the blood-brain barrier) can used treatment for Parkinson’s disease as it is converted into dopamine in the dopaminergic neurons of the midbrain where the main source of dopamine is, to normal concentrations. Levodopa is the most widely used treatment for over 30 years.

The figure shows the process of the administration of levodopa through time scale and the effectiveness of the symptoms being relieved and reduced below the threshold line where the symptoms appear.

Only around 5-10% of levodopa actually crosses the blood-brain barrier, whereas the remainder is metabolised to dopamine elsewhere in the body and cause adverse effects such as nausea, dyskinesias and joint stiffness. However by being paired with Carbidopa or benserizde it prevents the metabolism of levodopa to dopamine before it reaches the dopaminergic neurons, hence reducing the side effects but not completely.

Publication of trial ‘Levodopa and the Progression of Parkinson’s Disease’ by The Parkinson Study Group [4] on a sample size of 361 concluded that carbidopa-levodopa (paired) slows the progression of or has a prolonged effect on the symptoms of the disease. In comparison to a placebo group as a control, Parkinsonism was significantly increased more in the placebo group than with patients administered at different concentrations of carbidopa-levodopa (see figure 3). 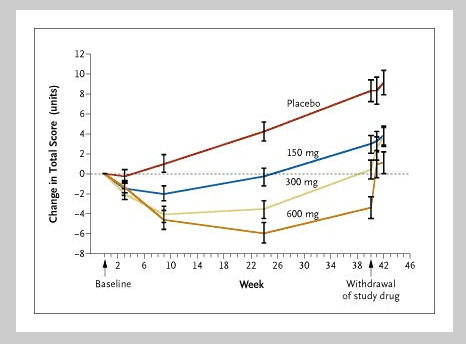 Improvement in Parkinsonism is represented by lower scores, and worsening by higher scores. Negative scores on the curves indicate improvement from baseline. The bars indicate the standard error.

People who have Parkinson’s disease may be restricted to the confines of their own homes as they may not even have the mobility to get up from a chair without help from another person. Due to the inability of someone being beside people with Parkinson’s all the time to help this causes economic pressure towards the NHS to provide sufficient technological advances to aid what is estimated to be 127,000 people which is a huge mass of money to go into development. In addition to this, the technology itself requires maintenance costing even more money.

Developing on the point of being restricted into the confines of their own homes, this raises the risk of losing social interactions of the outside world. Due to the inability to meet with family or friends every so often they want makes the individual feel alienated and lonely, which is one of the causes for depression. They will feel like they have lost their own life and power to do anything due to nothing of their own fault and this is ever more particular in the case that an individual has no more ties.

Treatment towards Parkinson’s disease has adverse effects which may be hugely unpleasant for the individual; it is vital that they are supported by care workers, friends and family in order with dealing with Parkinson’s as it what they will have to overcome for years in order to gain what they can of living a normal life. If there isn’t sufficient support then the patient will reject any further treatment as they feel it is too unpleasant to deal with.

Dopamine agonists have seen to have similar effects to levodopa on the brain and are mainly used as target towards delaying motor complications and when used in late Parkinson’s disease they are useful in reducing the off periods (figure 2, when the curve is below the line this is considered as the off periods as the effects of the drug has not been motion). 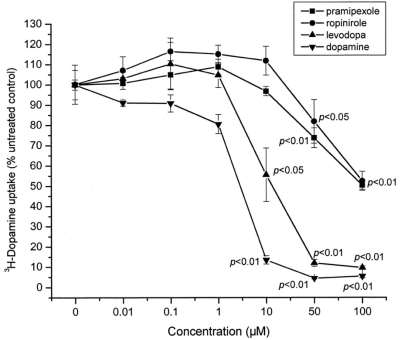 Compared with levodopa, dopamine agonists may delay motor complications of medication use but are less effective at controlling symptoms. Dopamine agonists also produce side effects such as drowsiness, insomnia, constipation, nausea and hallucinations which may be felt significant but usually mild. In addition, agonists have been related to impulse control disorders such as compulsive sexual activity, pathological shopping and gambling more so than levodopa. Furthermore, treatment of Parkinson’s disease through the use of dopamine agonists is more expensive than levodopa treatment.

DBS (Deep brain stimulation) involves surgical treatment of implanting a brain pacemaker, a medical device that sends electrical impulses to specific parts of the brain. Due to this DBS helps to alleviate the motor fluctuations and tremor symptoms of Parkinson’s disease. However this approach of treatment is generally recommended for people in advanced stages of Parkinson’s disease of which the effects of drug therapy are no longer effective.

DBS is often not the choice of option as neurological surgery is unpredictable in adverse effects which include compulsive gaming, depression, hallucinations and furthermore potential complications of surgery such as bleeding within the brain. Even after the surgery, patients will suffer swelling of the brain, sleepiness, disorientation and eventual removal of sutures [7].

There is evidence that mobility problems can improve through rehabilitation however the studies are deemed to be scarce and low quality [6]. Doing regular physical exercise/activities through physiotherapy is beneficial as you gain improved strength, mobility and flexibility and this in turn improves your quality of life by being less constricted to Parkinson’s diseases motor movement symptoms as you gain more control.

Exercises such as these have shown improvements in motor function for people with Parkinson’s disease tend as they tend to have long areas of inactivity. There are even respiratory improvements due to posture and deep diaphragm breathing exercises necessary for physical exercise as this improves vital capacity and chest wall mobility.

Sources from 2 were reliable as the website is an area of where announcements, discussions from various