A look at the reasons for the decline in the bee population and what can be done to arrest and possibly reverse the situation.

Why do we need bees?

Bees are absolutely essential to humans, without their help many crops would fail. They pollinate crops by transferring pollen grains between the anther (male germ cell) and the stigma ( the female reproductive system). It is a vital process as approximately one third of all plants eaten by humans are dependent on bee pollination.

Bees have hairy bodies which encourages pollen to cling to them as they travel between flowers. They need a large quantity of nectar and pollen to rear their young successfully so they visit a great many plants usually of the same species which in turn pollinates the whole crop.

Some flowering crops have only a brief period in which they can be pollinated; examples are vine crops such as squash, cucumber, melons and pumpkins. If they are not pollinated during the ‘window of opportunity’ then after the flower, there will be no seeds or fruits and the crop will fail. The bee plays an essential part in pollinating such crops.

Why is the bee population declining?

Over the last few years there has been more and more media attention regarding the ‘disappearance’ of our bees. Articles in all of the national newspapers are constantly appearing, the subject is on the news frequently and there are now whole television programmes made on the topic not to mention hundreds of thousands ‘hits’ available when entering the subject into a search engine on the Internet.

Some of the reasons given for the decline in the bee population are a reduction in grasslands and wild flowers due to over-grazing of cattle and sheep. Climate change is another factor as bees work well in temperatures that range from 16 degrees to 41 degrees. High winds and cooler temperatures will prevent bees from travelling far and genetically modified crops as a reason for bee decline has also appeared in the press.

This extract is taken from an article written by Brit Amos and published by Global Research in March 2008. The article was entitled ‘Death of Bees. Genetically Modified crops and the Decline of Bee Colonies in North America’.

Even the use of mobile phones has been given as a reason for bee population decline!

Below is an extract from The Telegraph dated 29 May 2010. The article was titled ‘Mobile phones responsible for disappearance of honey bee’, written by Dean Nelson.

‘Britain has seen a 15 per cent decline in its bee population in the last two years and shrinking numbers has led to a rise in thefts of hives.

Now researchers from Chandigarh’s Punjab University claim they have found the cause which could be the first step in reversing the decline: They have established that radiation from mobile telephones is a key factor in the phenomenon and say that it probably interfering with the bee’s navigation senses.’

Bee population decline does of course have world-wide interest and the USA and European countries as well as the United Kingdom have had tremendous problems with ‘Colony Collapse Disorder’ ( CCD) which means there is a sudden and complete absence of bees in the hive with no obvious explanation. There are no dead bees inside or outside the hive, the Queen is still present and there are food stores and capped broods ( young bees waiting to hatch).

As many agricultural crops world wide are pollinated by honey bees the increase in CCD has had a substantial effect on the economy:

‘According to the Agriculture and Consumer Protection Department of the Food and Agriculture Organization of the United Nations, the worth of global crops with honeybee’s pollination was estimated to be close to $200 billion in 2005 Shortages of bees in the US have increased the cost to farmers renting them for pollination services by up to 20%.’ (http://en.wikipedia.org/wiki/Colony_collapse_disorder)

Explanations for CCD are many and varied and include the over-use of pesticides, lack of proper food supply, disease and attacks from the Varroa and Acarapis mites.

The mites cause problems as they suppress the bees immune system making them more susceptible to viral infections.

The full name is the Varroa is very apt – the Varroa Destructor. The mite sucks bee blood from larvae, pupae and adult bees and also transmits debilitating and life-threatening viruses within the colony such as deformed wing virus and the acute paralysis virus.

The mite has become resistant to the pesticide that has always been used to control it Bayvarol Apistan and others do not seem as effective.

The Amercian Foul Brood ( AFB) is an infectious bacterial disease which can be spread easily by rogue bees not from the hive, wasps with intent to rob the hive of its honey or beekeepers who move infected hives during inspections. It is caused by Paenibacillus larvae and young infected bee larvae are particularly vulnerable, often dying in their cells after being sealed in.

The use of pesticides that contain neonicotinoids ( neonics) has been predominantly labelled in the press and web-based articles as being the chief factor in the disappearance of our bees.

Here is an extract from The Guardian, written by Damin Carrington and published 9 May 2014. The piece was entitled ‘Honeybees abandoning hives and dying due to 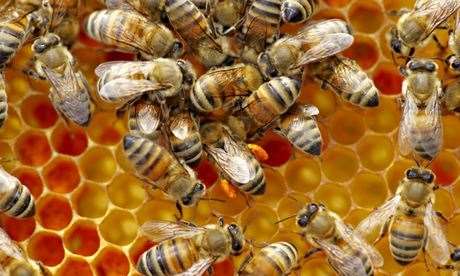 ‘Scientists found bees from six of the 12 neonicotinoid-treated colonies had left their hives and died. Photograph: Rex Features

The mysterious vanishing of honeybees from hives can be directly linked to insectcide use, according to new research from Harvard University. The scientists showed that exposure to two neonicotinoids, the world’s most widely used class of insecticide, lead to half the colonies studied dying, while none of the untreated colonies saw their bees disappear.

“We demonstrated that neonicotinoids are highly likely to be responsible for triggering ‘colony collapse disorder’ in honeybee hives that were healthy prior to the arrival of winter,” said Chensheng Lu, an expert on environmental exposure biology at Harvard School of Public Health and who led the work.’

What is in neonicotinoids and what effect is this having on bees?

Neonicotinoids are classified as systemic compounds which means they are soluble in water and are therefore easily absorbed by a plants’ root system. They are in pesticides such as clothiandin, imadcloprid and thiamethoxim.

Seeds of plants can be coated in the pesticide before planting and then the whole plant becomes contaminated including the sap, flower and tissues.

This may prove an effective form of pest control but as the nectar and pollen of the plant also become contaminated then it cannot help but have a detrimental effect on bees.

The molecular structure of neonicotinoid is similar to that of nicotine:

This structure makes is more specific to target the bees nervous system by disrupting the neuronal receptors which has a harmful effect on the sensory-cognitive functions.

This can create disorientation and memory impairment.

It is no wonder that bees have a high number of neurological receptors. One only has to observe the famous and highly complex ‘waggle-dance’ as the forager bees communicate their nectar sources.

Honey bees are hugely social insects, it is the structure of the colony and the communication between them that keeps them functioning, efficient and thriving. To lose this system would have a massive negative impact.

I had a conversation with a bee-keeper who is a member of Lincolnshire bee-keepers and he told me that neonicotinoids can affect the smell of a bee and on returning to the hive the infected bee could be rejected or killed. If there are a large amount of bees out foraging, all returning with a different smell to that of the bees within the hive then it is easy to see how that colony could be decimated fairly rapidly.

In previous years, pesticides have been used out in the fields that have instantly killed honey bees. As harsh as it sounds this is much better for the colony which can stand the loss sufficiently, grow and recover.

The effect of a neonicotinoid on a single bee is not lethal so the bees can return to the colony and contaminate all other bees.

Honey bees are really a victim of their own success. Their close-knit, hygienic way of living ( in a safe environment such as a hive, where nurse bees clean foragers on return) has meant that they do not possess as many detoxifying enzymes as some other insects do and are therefore more susceptible to the toxins found in pesticides. They have never before had the need to be so ‘hardy’ as they have always kept themselves free from infection.

One of the most striking features of the Apis mellifera genome is that it contains significantly fewer annotated genes than other insect genomes so far sequenced. It contains only about 11 000 protein coding genes (Honey Bee Genome Sequencing Consortium, 2006), whereas the fruit fly Drosophila melanogaster has about 13 500 and the malarial mosquito Anopheles gambiae has about 14 000 (Holt et al., 2002). Another invertebrate, the free-living nematode Caenorhabditis elegans, has even more, over 19 000 (Consortium, 1998).

What can and is being done?

Some restrictions in the use of neonicotinoids are already in place for some European countries. The European Commission have restricted the use for two years. Not all countries voted in favour of the ban – The UK included. Farmers say there is inconclusive evidence that neonicotinoids are to blame and they say the mites and viruses are more likely to be the cause of the decline in the bee population.

The link below leads to a report from the BBC on the EU’s decision.

The ban came in for September 2013. The effects of the withdrawal of pesticides containing neonicotinoids will be measured in September 2015 to see if there is a significant increase in bee numbers. It is therefore possible that the ban may not be made permanent.

The Pesticide Action Network produced a list of chemical and non-chemical alternatives for farmers who used neonicotinoids ( one of them being crop-rotation).

If there was to be an increase in managed flower-rich meadows this would certainly help the solitary bees and those bees that are confined to certain habitats.

The British Bee-keeper association encourages people to keep bee-friendly gardens with nectar rich, wind-sheltered plants that flower all year round including heathers, buddleia and lavender.

Nest sites for solitary bees can be created out of hollow stems such as bamboo canes.

Bee-keepers are encouraged to give extra care to bees and ensure there is no build up of the Varroa mite and also to ensure the bees have enough honey over the winter until nectar is readily available again in the spring. Bees can be fed with a sugar solution if honey stores are too low.

There is on-going research into methods of controlling the Varroa mite including the use of vegetable oil. This was made into pastry with high sugar and place on the top bars of the hive. The mixture contained a high level of emulsifier and was successful in killing up to 97% of the mite. Unfortunately it also killed high levels of bees ( more than 50%). A mixture containing lower levels of emulsifier was not as successful.

I also signed up for regular newsletters.

I have had conversations with bee keepers- verbal and email.

UKEssays have over 500 professional essay writers, ready and waiting to help you with your studies.