The California Spotted Owl (Strix occidentalis occidentalis) is one of the three subspecies of spotted owl and is found throughout California. It exists as a series of isolated local populations (metapopulation) of varying size from Monterey in the north, down the Sierra Nevada and throughout the mountainous regions of Southern California. The reason for this population structure is due to the discontinuous nature of the owls preferred habitat of mature forests that provide naturally occurring nesting sites for the bird, usually in the form of cavities or snags, which are more prevalent in older trees. These mature forests often form as “habitat islands” across California partially due to the mountainous nature of the landscape, but is also to some extent due to human activities such as logging and urbanisation. These activities have further fragmented and reduced the owl’s natural habitat by as much as 90%. Despite this decline in the owl’s natural habitat it is currently not considered a threatened species by the United States Government, unlike both other subspecies of spotted owl. A Forest Service study did however find the California Owl to be declining at a considerably faster rate than that of the listed Northern Spotted Owl. Several other studies have also observed similar declines in this subspecies population numbers causing concern over the future viability of the subspecies. One study even stated that the California Spotted Owl could potentially face extinction within the next 30-40 years. There has however been two different reserve design strategies already implemented in order to maintain the numbers of these owl; the SOHA (spotted owl habitat area) and the HCA (habitat conservation area), but to date these have had little effect in maintaining or even slowing the decline in their numbers. It has therefore been proposed that $500,000 grant should be provided in order to improve the habitat quality for the owl in order to prevent extinction. This proposal will be assessed using computer simulated models of the California Spotted Owl in order to determine if extinction is indeed a real possibility for the subspecies. If this is found to be the case, the best conservation strategy using the available funds will be determined in order to prevent extinction, or at least slow the rate of decline in order to gain more time for further conservation efforts.

The computer simulated models of the California Spotted Owl where carried out on a simple population modelling program called RAMAS Ecolab. The initial conditions of the metapopulation where first tested in order to determine if the observed decrease in the population numbers was set to continue and to also determine whether there was an immediate possible risk of extinction of this subspecies of spotted owl. In the model menu under general information the duration was set to 20 to simulate 20 time steps of reproduction with each time step representing a year. The number of replications was then set to 100 and the use of demographic stochasticity was enabled. Under population in the model menu all 22 subpopulations being observed were assigned a growth rate of 0.8270 and a survival rate of 0.750, these figures where obtained from previous study’s that had observed the population numbers of the California Spotted Owl. All populations were then set to experience exponential growth with a lack of density-dependent growth. The estimated population numbers and carrying capacities of each of the subpopulations were then set using data obtained from the Department’s California Natural Diversity Database (CNDDB) which contains data on these owls tracked throughout California. Lastly under the dispersal and correlation in the model menu, the dispersal rate was set at 0.05 which means that at every time step up to 5% of each population may move from one population to another within its range. The average dispersal distance was set at 40 with a maximum dispersal distance of 100. The correlation among distant populations was set at 1.00. The simulation was then run with information on the average abundance every 5 time steps recorded for the metapopulation and a few select subpopulations (3, 6, 18 and 19). The percent chance of extinction of the metapopulation and its occupancy after 20 years was also recorded.

Part 2: The effects of dispersal

The potential effects of a decrease in the dispersal among the subpopulations was tested in order to determine if the increase in urbanisation in Southern California that could have the potential to make it more difficult for dispersal between the isolate subpopulations to occur and whether it would have a significant effect on the final abundance of the metapopulation and its overall chance of extinction. A simulation was set up with the same data as the initial conditions, but this time the average dispersal distance was set at 5, and the maximum dispersal distance was set at 25. The simulation was run with the same information as the first simulation recorded.

Part 3: The effects of survival

The single largest factor that appears to be affecting the metapopulation appears to be the recent decline in availability and quality of its mature forest habitat. It has been assumed the habitat of the subpopulations can be improved with a monetary investment, with the cost of improving habitat occupied by each subpopulation estimated at $1000 multiplied by its carry capacity. In improving an area it should be possible to increase the growth rate of a subpopulation from 0.875 to 1.01. Five simulations were run using this assumption. The initial conditions were used and the growth rate of select subpopulations depending on the selection criteria of five scenarios (Appendix 7). For each of the five simulations run the average abundance, chance of extinction and metapopulation occupancy were recorded.

Figure 1: The average abundance for some spotted owl populations 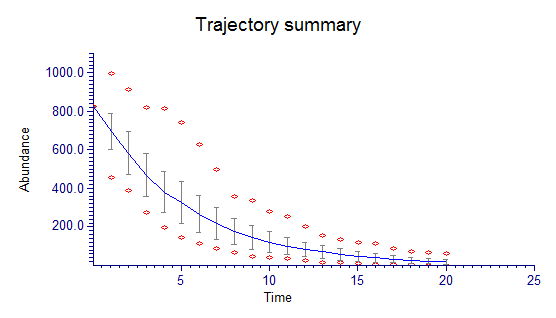 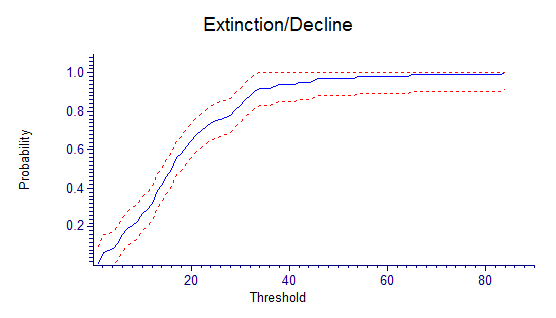 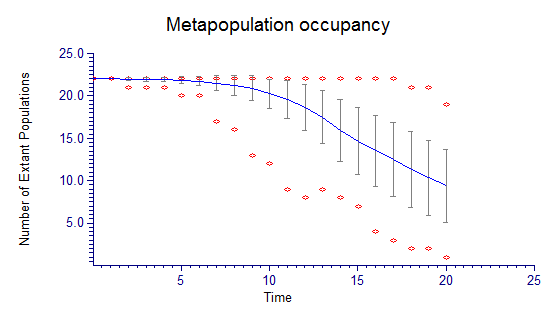 Figure 4: Results of the five restoration scenarios and their costs

The results obtained from the computer simulations show a clear and rapid decline in the population number of the owl metapopulation with a drop in numbers from the initial average abundance of 824.00 to 18.06 after 20 years, which is a reduction of roughly 98%. If these predicted trends were to occur in the natural population it would be detrimental to their chance of survival as the remaining owls may not be enough in order to revitalise the metapopulation. This is backed up by the predicted chance of extinction after 20 years of 65%. However there are limitations of the computer simulation program which may produce results that are not representative of the natural population. For one thing there are many assumptions made within the model such as the quality of habitat being identical between the different subpopulations, as they all share the same growth and survival rates. In reality there is likely to be a wide spectrum of habitat quality’s between the different subpopulations that would result in differences in growth and survival rates between them. Secondly it has been assumed that the population of the owls is density-independent which assumes that the currently observed trend will continue and is expected to decline until extinction. However the metapopulation could in fact have temporarily exceeded its carrying capacity and is just in the process of returning to equilibrium, however this seems unlikely as none of the observed subpopulations were even near their carrying capacities. A more plausible explanation is that of a decline due to unfavourable environmental conditions. For many years Southern California has been experiencing a lower than normal levels of precipitation which may lower fecundity or survivorship within the metapopulation. If this were to change it could cause a reversal in the decline of the metapopulation. Despite the many assumptions which may cause results to be obtained that are not truly representative of the natural population, there was show to be a significant decline in both the average abundance and metapopulation occupancy that would merit some form of conservation effort to take place. From the results of the five scenarios (Figure 4) on improving habit quality of selected subpopulations it would appear the best strategy to take would be to improve the quality of habitat of the smaller subpopulations as it resulted in the highest average abundance and metapopulation occupancy after 20 years. This does however conflict with the conclusion of a paper by (insert author) which had identified the San Gabriel and San Bernardino, the two largest subpopulations, as having a pivotal role in maintain the metapopulation as they had the potential to provide a large number of colonists. This suggests more research may be required in order to develop an effective conservation plan for the California Spotted Owl.

Appendix 1: The average abundance for some spotted owl populations with decreased dispersal

Appendix 2: Extinction/decline of the owl metapopulation with decreased dispersal 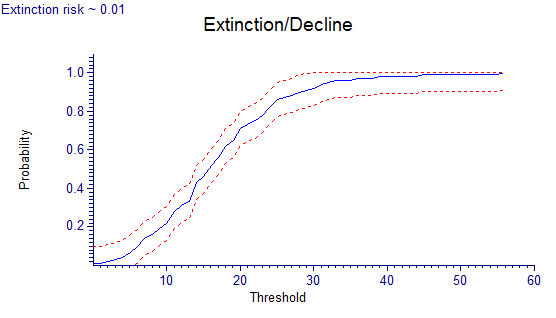 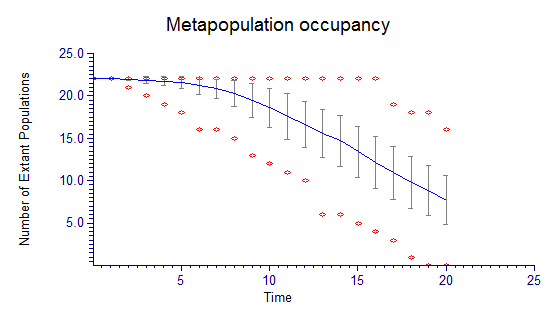 Appendix 4: The average abundance for some spotted owl populations with decreased survival rate

Appendix 5: Extinction/decline of the owl metapopulation with decreased survival 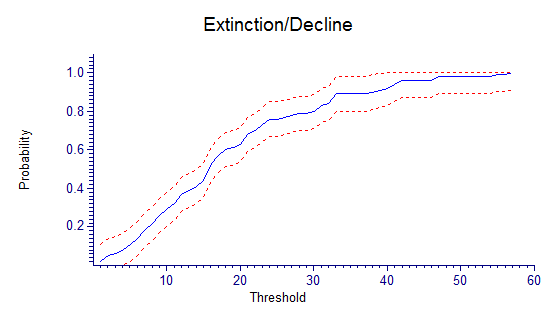 Appendix 6: Carry capacities and cost of restoring twenty-two populations of the spotted owl in California

Appendix 7: Restoration scenarios for the spotted owl in California

Scenario A: A random subset of populations.

Scenario B: Only the largest populations.

Scenario C: Only the smallest populations.

Scenario E: A group of populations that are all in one area.