Bacterial magnetosomes synthesized by magnetotactic bacteria have recently drawn immense attention due to its unique features. Immobilized enzymes have a number of applications in today’s industries. Studies have shown that immobilized enzymes have a better shelf life and kinetics when compared to free enzymes. Magnetosomes have been used experimentally as carriers for antibodies, enzymes, ligands, nucleic acids, and chemotherapeutic drugs. This study reports the efficient immobilization of the enzyme alpha glucosidase on the magnetosomes extracted from the strain Magnetospirillum gryphiswaldense (MSR1). The alpha glucosidase enzyme was immobilized onto the extracted magnetosome surface using p-NPG (4-nitrophenyl-α-D-glucopyranoside) as the substrate. Theactivity of the magnetosomes was characterized by SEM analysis. There was successful immobilization of the enzyme on the magnetosome. It was observed that the properties of the immobilized enzyme had improved when compared with free enzyme.

Alpha-glucosidase (α-D-Glucosideglucohydrolase) is also known by another commonly used name, maltase. It plays a role as a catalyst in the hydrolysis of maltose to glucose units. Mammalian intestinal mucosa is known to secrete disaccharidases such as maltose, lactose and sucrose in abundance. Alpha-glucosidase (maltase) is used for inspecting the activity of alpha amylase and also for the determination of maltose in brewing. [6,7] Alpha-glucosidase catalyzes the following reaction;

Deficiency of α-glucosidase has ill effects on the insulin uptake system in the body causing a disease called Pompe’s Disease. Diagnosis of azoospermia has potential to be aided by measurement of alpha-glucosidase activity in seminal plasma. Inhibition of alpha-glucosidase can prevent fusion of HIV and secretion of HBV.

Clearly, this enzyme is very important both physiologically and medicinally or pharmaceutically. Immobilization of this enzyme is the main objective of this study. By immobilizing α-glucosidase onto the magnetic nanoparticles (magnetosomes in this case) the shelf life of the enzyme, its optimum temperature and optimum pH requirements and hence its storage and activity can be enhanced. This Alpha-glucosidase immobilization can be used as biopolymer and biomaterials in the field of pharmacy and medicine. [6,7]

Magnetotactic bacteria (MTB) are phylogenetically diverse microorganisms that navigate along earth’s magnetic field. Most of these bacteria are microaerophiles that require a lower level of oxygen than what is provided at normal sea level on earth. High numbers of MTB (105-106/ml) are usually found at the oxic-anoxic transition zone, generally located at the sediment-water interface. Although MTB occur ubiquitously in diverse aquatic environments, different habitats have been found to contain various morphological types of MTB, including rod-shaped, vibrio-like, coccoid, and helical forms. A great diversity is also noted in the number, arrangement and shape of magnetosome particles in different MTB.

MTB occur in different phylogenetic lineages of bacteria. The majority of MTB affiliate with the α-Proteobacteria. A morphologically distinct, large magnetic rod was assigned to the Nitrospiraphylum, whereas a magnetotactic many-celled prokaryote and a magnetic sulphate-reducing bacterium belong to the δ-subclass of Proteobacteria. [8]

Magnetospirillum gryphiswaldense (MSR1) is a Gram-negative, spiral shaped, aquatic, mesophillic organism. Its optimum temperatures range is between 25-40°C. The main structures of interest inM.gryphiswaldenseare called the magnetosomes. Magnetosomes are the key component of these magnetotactic bacteria. They are intracellular, membrane-bound magnetic iron-bearing inorganic crystal like structures. It has been realized that these bacterial magnetosome portraya genuine prokaryotic organelle, showing a similar degree of complexity as observed in its eukaryotic counterpart. The morphology, composition, size and arrangement of these magnetic mineral crystals are subject to a species-specific chemical, biochemical and genetic control.Mature magnetite crystals usually fall within the size range of about 35–120nm. Exception being the very large magnetite crystals with lengths up to 250nm produced by an uncultured coccus.

The morphology of magnetosome produced usually varies between different bacterial species or strains. There are generally cuboidal, elongated or shaped like an arrow. Magnetosome are normally 35–120 nm long. Hence, single-domain. Magnetosomes are usually arranged in chains in the bacterium.[9]

The tiny magnetic dipoles in the magnetosome chain, when combinedfor working, make use of certain magnetic signals which help in the rotation of the bacterium towards the desired direction.Due to these forces, there is a twisting motion (torque) on the static magnetosome chain which will allow it to move the cell with the magnetic field lines. The magnetosome direct the bacteria towards a region where the environment for the growth of the cell is appropriate, but flagella are required for it to travel there.

Culturing and maintaining the organism:

All chemicals were purchased from Hi-media, India. TheHungateanaerobictechniquewas used with astandardprocedure for bacterial culturing and maintenance. Pure strain of Magnetospirillum gryphiswaldens (MSR 1) was obtained from DSMZ Germany. The culture was preserved in the standard condition as per the manual. The sub-culturing of the bacteria was carried out in the lab using MSGM medium. Modified MSGM medium was prepared by adding (v/v) of different percentages (5,10,25,50,75%)of nutrient broth (NB) (HIMEDIAM002) separately after adjusting MSGM media pH to 6.7 using NaOH.

70ml of the medium was measured and poured into serum bottles. Nitrogen was bubbled into the medium to create micro-aerobic condition. The bottles were closed with butyl rubber stoppers and sealed with aluminium caps. Media was sterilized by autoclaving and sterile solutions of wolfe’s vitamin elixir and ferric quinate was added. The media was then inoculated with Magnetospirillum gryphiswaldense culture and incubated in the shaker incubator for 3 days at room temperature.

Three day old culture was transferred to 50ml centrifuge tubes and centrifuged at 8000rpm for 20 minutes. The pellet obtained was re-suspended in 10ml TRIS-HCl buffer (pH-7.4).(Tris HCl buffer was prepared by dissolving 0.5M Tris base or 61g of Trizma in 1000ml of distilled water).A 1:10 dilution of buffer and water was prepared before use. It was stored in a cool dry place. The suspended pellet was subjected to sonication for 120min (30W). After the sonication process, 1% SDS was added and incubated in water bath (90°C) for 5 hours. A black pellet was obtained.The tube containing the pellet and suspension had the magnetosomes. At every step the magnetosomes were washed using the buffer. The magnetosomes were separated by placing South Pole of a ceramic bar magnet near the magnetosome suspension. Magnetosomes were further purified by overnight incubation in Single tube magnet apparatus. The separated magnetosomes were lyophilized prior to immobilization of enzyme. [1]

Immobilization of α-glucosidase enzyme on magnetosomes:

First, 100µL of 100 mmol phosphate-citric acid buffer (pH-5.0) containing 0.2% (v/v) gluraldehyde was added to 10µL magnetosomes (4mg/ml). It was subjected to ultrasonic dispersion for 20mins at room temperature. Then 1mL of α-glucosidase solution (0.05mg/mL) was added to the mixture and incubated at 25°C with shaking (150 rpm).Magentosomes with immobilized α-glucosidase were collected magnetically and washed thrice with 100mmol phosphate-citric acid buffer (pH 5.0). The activity recovery of the immobilized α-glucosidase was calculated as

The morphological and magnetic properties of the magnetic nanoparticles were characterized by SEM.

α-glucosidase activity was determined by adding different concentrations of enzyme solution to 100mM phosphate buffer (pH-6.9) containing 10mM p-NPG. The reaction mixtures was incubated at 50°C in a water bath for 15mins and stopped by adding ml of 2M Na2CO3. Subsequently, the released p-nitrophenolwas measured at λ=405nm. [5] (One unit of α-glucosidase assay is defined as the amount of enzyme to release 1µmol of p-nitrophenol per minute.) Shelf life of the enzyme was determined by checking its kinetics one a week for 3 weeks.

Fig 1. Magnetosomes attracted to south pole of a magnet

SEM ANALYSIS: The morphology of the magnetosomes were analysed using scanning electron microscope and they were found to be of cubo-octahedral geometry. (Fig. 2a and Fig. 2b) 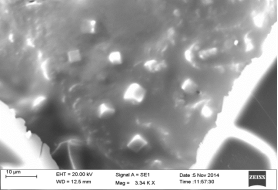 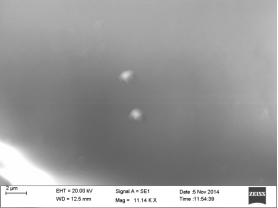 To confirm immobilization, the activity of the enzyme-magnetosome complex was checked with that of the control (non-immobilized enzyme) at ÊŽmax=405 at pH 6.9 and temperature 29°C. A graph of % activity was plotted. 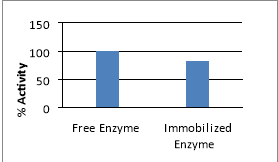 The highest activity was observed to be 83.04%. This tells us that the activity is highest around pH=6.9 and temperature 29°C. (Table 1)

If pH and temperature was varied, the activity changed. [3] 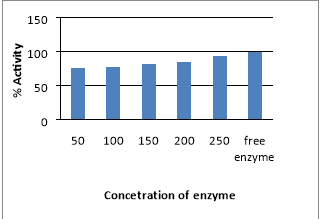 As the concentration of the immobilized enzyme increased, the % activity recovery also increased at pH 6.9 and temperature 29°C. (Table 2.) 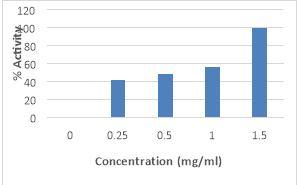 The % Activity increased with the increase in concentration of the substrate. The pH was 6.9 and temperature was 29°C.( Table 2b)

It was observed that the activity of the enzyme had not been altered even after storing it at 4°C for three weeks. The % activity were found to be 81%, 72% and 72% after 1,2, and 3 weeks respectively.

It has been observed on the whole that the activity of α- glucosidase was enhanced when immobilized onto the magnetosomes.This activity however has not been reported before. Immobilization onto magnetic nanoparticles has been reported but using magnetosomes this is one of the only papers that has successfully immobilized α- glucosidase and demonstrated enhanced activity in terms of %activity.