Amino acids give the basic building blocks of forming a protein and play an essential role in the energy metabolism, neurotransmission, and lipid transport. Their quantitative analysis is important for various uses, including disease diagnostics and in elucidating nutritional influences on physiology (Fromm & Hargrove, 2012).

Amino acid levels in the body fluids are used to diagnose metabolic deficiencies. Deprived or excessive levels of amino acids can show different defects of deficiencies (Lanpher, 2006). Preparation requirements and sample clean-up make the procedure a slow procedure. While some protocols may provide adequate chromatographic methods and derivatization procedures, that makes it more sufficient and quicker.

Leucine is an essential amino acid, which means that it cannot be manufactured in the body. It is also well represented in all the proteins in the body. In vivo leucine kinetics presents a theoretically valid index of protein turnover. Consequently, isotopically labelled (2H, 3H, 13C, 14C or 15N) leucine is most commonly used for the study of protein metabolism in humans and animals (Fromm & Hargrove, 2012).

Leucine is an amino acid which is usually obtained by hydrolysis of most common proteins. It was among the first of amino acids to be discovered in 1819 in muscle fibre and wool (Bauman, et al., 1992). Leucine is present in large proportions in haemoglobin. This amino acid is also known for preventing the breakdown of muscle proteins caused by injury or stress (Lanpher, 2006). In addition, Leucine may be beneficial for people suffering from phenylketonuria. Leucine is an essential amino acid, so your body cannot produce it naturally but can only obtain it from food, including protein-rich animal food like fish, chicken, beef, also dairy and eggs.

Leucine is classified as a hydrophobic amino acid due to its aliphatic isobutyl side chain. It is encoded by six codons (UUA, UUG, CUU, CUC, CUA, and CUG) and is a major component of the subunits in ferritin, astacin and other ‘buffer’ proteins.

2. Inborn errors of the metabolism

Leucine is involved in a few inborn errors of the metabolism, from which maple syrup urine disease (MSUD) is one of the main mentioned. MSUD is caused by a deficiency in the branched-chain alpha-keto acid dehydrogenase complex. (Lanpher, 2006) Ketoacidosis, neurological disorders, and developmental disturbance can all be induced by the accumulations of branched-chain amino acids (BCAAs) and branched-chain alpha-keto-acids (BCKAs) in patients with MSUD. According to clinical investigations on MSUD patients, leucine levels over 400μmol/L apparently can cause any clinical problem derived from impaired function of the central nervous system. Damage to neuronal cells found in MSUD patients are presumably because of higher concentrations of both blood BCAAs or BCKAs, especially alpha-keto-isocapronic acids. These clinical data from MSUD patients provide a valuable basis on understanding leucine toxicity in the normal subject. (Fromm & Hargrove, 2012)

The complexity of the human genome and the metabolic reactions taking place in the human body results in many diseases having extremely variable phenotypes. This is the case with 3-methylcrotonyl-CoA carboxylase (MCC) deficiency (Baumgartner, 2004), an inborn error of leucine metabolism.

Leucine is one of the three essential BCAAs. It plays vital roles in the regulation of protein synthesis and degradation (Shimomura, 2006). Leucine catabolism results in the formation of NADH (Nicotinamide adenine dinucleotide) and FADH (Flavin adenine dinucleotide), which can enter the oxidative phosphorylation reaction to provide ATPs. Exercise increases leucine catabolism greatly, to provide energy to muscle cells (Shimomura, 2006). To aid this process the enzymes responsible for leucine catabolism are closely associated with the mitochondrial membranes of muscle cell. The products shown in Figure 1 are acetyl-CoA and the ketone body aceto–acetic acid. Leucine is therefore known as a ketogenic amino acid. Acetoacetic acid can be converted to acetyl-CoA, which can then enter the Krebs cycle (Sweetman, n.d.). 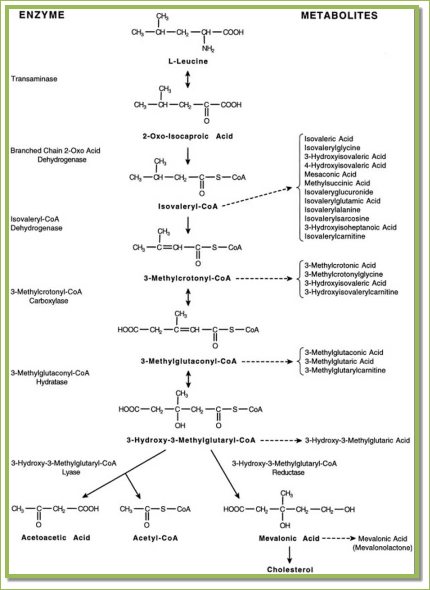 Figure 1.1: Leucine catabolic pathway. This figure shows the intermediary metabolites of the leucine pathway. The enzymes involved in each step are shown on the left. (Adapted from Sweetman & Williams, 2001).

Leucine has been proposed to be the primary mediator of the metabolic changes that occur when consuming a high protein diet. At the molecular level, leucine has been shown to activate the metabolic regulatory kinase known as mammalian target of rapamycin, mTOR. Activation of skeletal muscle mTOR results in increased protein synthesis and thus, increased energy expenditure. Hypothalamic mTOR activation is also involved in the regulation of feeding behaviors. Of note is the fact that direct injection of leucine into the hypothalamus results in increased mTOR signaling leading to decreased feeding behavior and body weight. This effect is unique to leucine, as direct injection of valine, another BCAA, does not result in hypothalamic mTOR activation nor reductions in food intake or body weight.

Macronutrients, such as protein or amino acid, not only supply calories but some components may also play as signaling molecules to affect feeding behavior, energy balance, and fuel efficiency. Leucine, a branched-chain amino acid is a good example. After structural roles are satisfied, the ability of leucine to function as signal and oxidative substrate is based on a sufficient intracellular concentration. Therefore, leucine level must be sufficiently high to play the signaling and metabolic roles. Leucine is not only a substrate for protein synthesis of skeletal muscle, but also plays more roles beyond that. Leucine activates signaling factor of mammalian target of rapamycin (mTOR) to promote protein synthesis in skeletal muscle and in adipose tissue. It is also a major regulator of the mTOR sensitive response of food intake to high protein diet. Meanwhile, leucine regulates blood glucose level by promoting gluconeogenesis and aids in the retention of lean mass in a hypocaloric state. It is beneficial to animal nutrition and clinical application and extrapolation to humans.

Genetic disorders may also be complex, multifactorial or polygenic; this means that they are likely associated with the effects of multiple genes in combination with lifestyle and environmental factors. Multifactorial disorders include heart disease anddiabetes. Although complex disorders often cluster in families, they do not have a clear-cut pattern of inheritance. This makes it difficult to determine a person’s risk of inheriting or passing on these disorders. Complex disorders are also difficult to study and treat because the specific factors that cause most of these disorders have not yet been identified.

Gas Chromatography – Mass spectrometry (GC-MS) has been extensively used to measure leucine enrichment in plasma samples in the past. Since leucine detectability threshold of a quadruple GC-MS was too low, a magnetic sector isotope sector ratio mass spectrometry (IRMS) was used. (Bauman, et al., 1992)This also had complications due to sample drying and the fact that it could only analyse gas samples. Hence, the labelled carboxyl group of leucine must be liberated as CO2 by means of a ninhydrin reaction for subsequent analysis by IRMS.

Another method is to use high performance liquid chromatography (HPLC) for the separation of amino acids. This involves separation by ion-exchange, with a gradient application of buffer and post-column derivatization to allow detection. (Bauman, et al., 1992) Non-derivative amino acids have been separated in reversed-phase columns with addition of an ion-pairing agent in the mobile phase. This is followed by post-column derivatization.

Metabolomics is the study of the small molecules, contained in a cell, tissue, organ or biological fluid (Fromm & Hargrove, 2012). Metabolomics data can be generated from an array of sources such as liquid or gas chromatography coupled to mass spectrometry, capillary electrophoresis (CE), and nuclear magnetic resonance (NMR) spectroscopy (Corey D DeHaven*, 2012). Typically, metabolomics uses non-targeted methods where the analytical conditions are optimized to detect and identify as many molecules as possible. However, targeted metabolomics methods where the chromatography is optimized for detection of a specific molecule or class of molecules are also used. In either case, the structure of metabolomics data is generally three dimensional. For example, the data for a separation method coupled with mass spectrometry includes values for time, intensity and mass (m/z). The fundamental goal of metabolomics analysis is to quickly and accurately identify the metabolites detected in a complex biological sample and determine which change (increase or decrease) in response to experimental conditions (e.g., disease state, drug treatment, etc).