Genetically modified organisms (GMOs) have become very controversial among both the public and scientists with its benefits and drawbacks (Wohlers, 2013). With the introduction of Flavr Savr tomato, GMOs entered the commercial market in early 1990s (James, 1996). GMOs are living organisms that are derived from genetic manipulation in which its genetic material (DNA) has been modified using genetic engineering techniques to insert foreign, or mutate or delete its native genes (Klein, Wolf, Wu, & Sanford, 1987). GMOs consist of GM animals and GM crop-related plants, which could be GM food. GM foods are classified into three categories:

Moreover, GMOs are used in medical and biological research, production of drug and medical treatments (Philips, 2008).

Traditionally, a majority of genetically modified food are developed using conventional method through plant breeding. The common genetic engineering techniques used in production of a GMO are recombinant DNA technology and “gene gun” technique. For example, targeted DNA and a plasmid vector are cleaved respectively and then joined together by restriction enzymes. Cells take up the targeted gene from plasmid vector for gene expression so that the desirable traits can be transferred (Carroll, 1993). Agrobacterium tumefaciens is one of the commonly employed bacteria to transfer DNA to the plants. “Gene gun” shoots DNA coated microscopic particles into the plant cell which is regenerated into a whole transgenic plant after cell division (Southgate, Davey, Power & Marchant, 1995). The newly-born species is GMO with some characteristics that cannot be found in its native species.

From figure 1, it indicates that USA, Brazil, Argentina, Canada and India are the countries who own the biggest area for farming biotech crops. 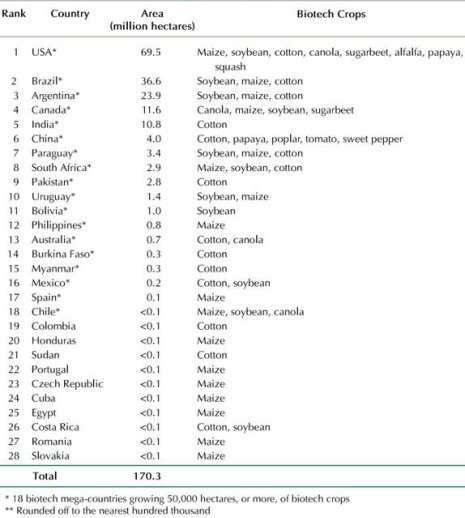 Apart from GM plants, Atlantic salmon, Salmo salar is one of the examples of GM animals. The genome of GM salmon contains a switch-on gene from ocean pout – Zoarces americanus and an inserted growth gene from pacific chinook salmon – Oncorhynchus tshawytscha. Atlantic salmon is the first GM animals getting approval for human consumption in the United States (Pollack, 2010).

Food security is defined by The World Food Summit of 1996 as “when all people at all times have access to sufficient, safe, nutritious food to maintain a healthy and active life”, which indicates that food security is including economic and physical access to food in order to meet the dietary needs of people (FAO, 2012). It is based on three aspects: food availability – sufficient amount of food available in a consistent basis (long-term supply of food), food access – adequate resources to get a nutritious diet, and food use – appropriate use of food based on the knowledge of basic nutrition and care (WHO, 2015). Food security has become a key issue for governments over the world, especially developing countries as there is an imbalance between increasing population and the crops lost due to climate change, which arise people’s concerns about mass starvation (Taylor, 2011).

Food safety is the conditions and practices describing handling, preparation and storage of food to preserve food quality in order to prevent from foodborne diseases or contamination (Winter & Gallegos, 2006). The assessment of food safety adopts the concepts of “substantial equivalence” between GM food and its native species instead of examinations of each chemical in food on tested animals (Schauzu, 2000). Actually, food safety and food security are interrelated. Climate change and poverty are the biggest enemies of both food security and food safety.

3. Impacts of GMOs on food security

Surviving on less than 2000kJ per day, there are about 900 million people undernourished in the developing countries (FAO, 2012). These people do not have enough access to food. Introduction of genetic engineering techniques in agriculture is probably a remedy to them. Some global organizations have an acknowledgement on genetically modified food can help ease food insecurity. The application of biotechnology in food and agriculture nowadays can address some problems associated with food insecurity (WHO, 2005). Agricultural biotechnology instead of conventional farming can help poor farmers and consumers in developing countries so as to improve food security (FAO, 2004).

Crop yields are greatly affected by insects (Anderson, Cunningham, Patel, Morales, Epstein & Daszak, 2004). The GM crops with Bt gene such as Bt corn, which is resistant to insects, are then less affected by the action of insects. Hence, the production yields are getting high. Increasing food production can provide more food source to people; therefore the severity of food insecurity is reduced. Figures 2 and 3 show the statistics of average yields of GM crops that the yields are enhanced. Someone may argue that Bt cotton is not crops but plants only. However, the greater yields can increase farmers’ income and hence improve their economic status. The more income they have, they are capable of having better daily diets for efficient intake of various nutrients. Cotton bollworm and whitefly are the most serious pests of cotton to cause a reduction of annual income in India. US$660 million are used in insecticides on all crops in India. There are at least US$300 million used on cotton alone. (Manjunath, 2004) (Rai, AcharyaS, Virmani & Aggrawal, 2009). 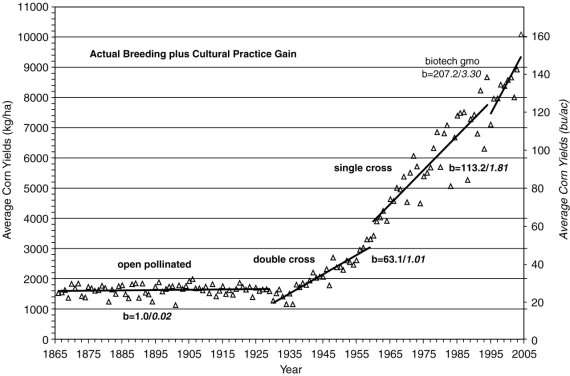 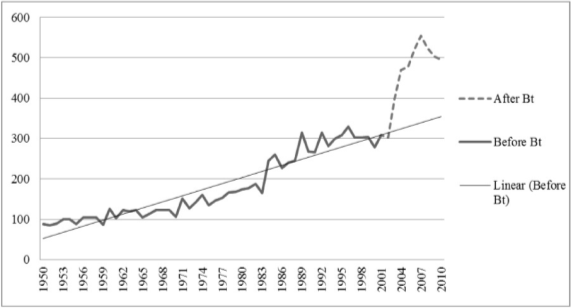 Figure 3: Average cotton yield in India from 1950 to 2010. The trend of cotton yield kept increasing. After Bt gene injection into native cotton species, there was a boost of the yield between 2001 and 2010 (source: Indian Cotton Advisory Board).

There are 250 million people suffering deficiency of vitamin A. About half million children get blindness each year due to a lack of vitamin A. Unfortunately, a majority of these children would die within months. In an ideal case, everyone worldwide can have appropriate diets. Rice is the major diet in many countries. Since white rice does not contain vitamin A, there is an improvement of people’s lives with more nutritious rice (Magana-Gomez, 2009). As a result, “Golden Rice” project has been launched.

After continuous try, Golden Rice is created from Agrobacterium sp. to insert three new genes with the expression of production of enzymes responsible for beta-carotene synthesis to provide vitamin A. Golden Rice is in yellowish orange color. The stronger the color, the higher vitamin A contents it has. The aim of creation of Golden Rice at the beginning is to provide free technology to farmers in developing countries, which requires negotiation of over 100 intellectual and technical property licenses (Potrykus I, 2001) (Magana-Gomez, 2009) (Ermakova, 2007) (Welch & Graham, 2004).

Take GM salmon as an example, AquAdvantage salmon is made from inserting genes from ocean pout and chinook salmon. According to figure 4, comparing AquAdvantage salmon with standard salmon in the same age, the former one is heavier than the latter one. Since the inserted genes allow AquAdvantage salmon to produce growth hormone in all temperatures faster, they only require half time to develop into adult size (standard time require 3 years to grow up). Although growing larger, Aqua Bounty, which is a biotechnology company in Waltham, Massachusetts, claimed that there is no difference in their look, taste and nutritional value (Genetic Literacy Project, 2012) (Saenz, 2010). 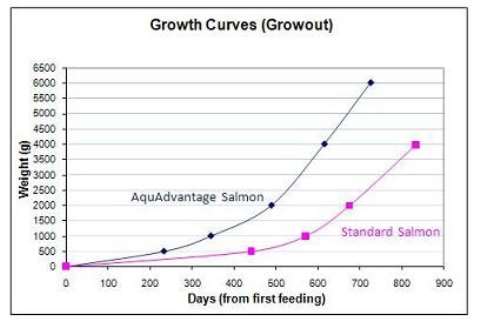 As I mentioned, the first GM food being introduced into marketplace was Flavr Savr tomato. This species of tomato have longer shelf-life than the conventional one. Scientists took advantage of antisense technology to shield expression of polygalacturonase, which is an enzyme to facilitate the degradation of pectin. Consequently, the cell walls of plants are softened and ripened owing to the action of polygalacturonase (Engeseth, 2001). These GM tomatoes have longer shelf-life (double) than conventional tomatoes. It is because longer time is allowed for tomatoes to accumulate the flavor and color on the vine by reduction of the enzyme’s expression (Engeseth, 2001). 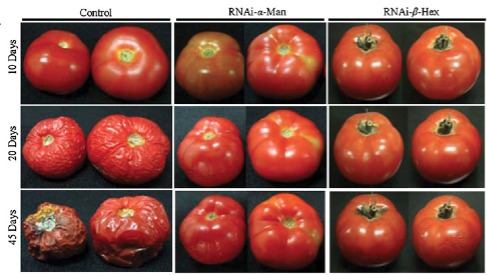 4. Impacts of GMOs on food safety

Once the GMOs especially GM food is introduced into market, different comments have arisen. Basically, there are three groups of people: GM food supporters, GM food haters and people who neither support or against GM food. There is inadequate evidence or study showing the side effects from GM food. Simultaneously, some governmental departments, organizations and corporations hold the different view on food safety of GM food. The World Health Organization (WHO), the British Royal Society, the U.S. National Academy of Sciences and the American Medical Association among who have investigated the effects of GM crops have identical conclusion: it is safe to eat either GM crops or foods containing components derived from GM plants; consumption of these food or GM crops is not riskier than consumption of the same foods with components from plants by plant breeding (American Association for the Advancement of Science, 2012). The statistics and assessments of GM food show that it is safe to eat GM food in people’s diets. GM food is approved by 4 departments in the U.S. including the Food and Drug Agency, the Environmental Protection Agency, the US Department of Agriculture, and Animal and Plant Health Inspection Service. On the other hand, Dr. Theirry Vrain, a former research scientist for Agriculture Canada, claimed that there are lots of studies to show engineered corn and soya containing toxic or allergenic proteins that harms human health. GMOs, arising debates and controversies, should be kept an eye on the safety issues associated especially GM food for consumption.

Some GM crops are made to be resistant to insects or pests. Most commonly adopted gene is Bt gene. A Japanese microbiologist, Ishiwata first discovered soil bacterium Bt (Bacillus thuringiensis) (Kumar, Sharma & Malik, 1996). Carrying proteinaceous crystals, Bt can kill the insects with receptor proteins in gut membranes binding to Bt proteins. In 1996, Bt crops e.g. Bt potatoes and Bt corns were commercialized in USA. Nowadays, 23 countries are cultivating Bt crops with an area of farmland of over 46 million hectares (James, 2008). According to figure 6, the use of insecticides on three types of cotton is compared. From year 1999 to 2001, Bt cotton required the lowest usage of insecticides among each year. With resistance to the pests, the use of pesticides can be reduced to lower level. Thus, human would have fewer contact or consumption of residual pesticides on food crops that pesticides harm to human health. These crops can hence reduce damage by pests itself. 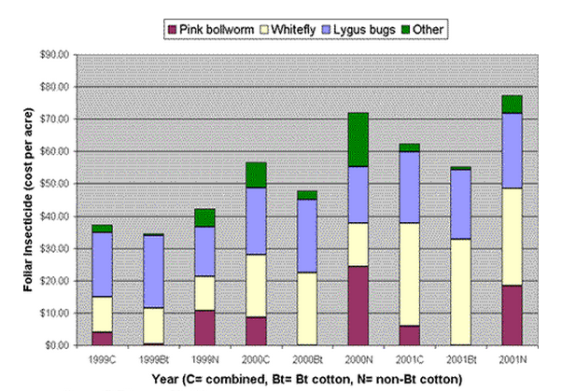 In the process of genetic engineering, a marker is used to identify transformed cells. Usually, antibiotic resistance marker genes ARMGs (e.g. kanamycin-resistance gene) are adopted. ARMG is linked with target gene and transferred to a plant cell at the same time because it is hard for scientists to determine whether target DNA is inserted in the plant cell in the early stage of genetic engineering (Chow, 2009)