For cells to carry out their physiological role, they must be able receive and respond to a variety of extracellular messages (Ségaliny, Tellez-Gabriel, Heymann, & Heymann, 2015).The activation of intracellular signalling comes from the cells ability to interpret extracellular chemical and protein messengers via the binding of ligands (ions, hormones etc.) to their specific receptor. The binding of ligands to cell surface receptors, activates the intracellular signalling pathway that leads to a specific cellular response such as protein synthesis, transcription of DNA, apoptosis, increased cellular uptake ions or an increase in enzyme activity (Fig 1.).

The target tissue that a ligand binds to determines the specific effect that it will have on the cell. Ligands can exert a various range of cellular actions on different types of cells duodenal, mucosal, muscle cell etc. The receptor sites of the target cell have a high affinity and specificity for their ligands.

Permeable and non-permeable ligands, have distinctly different cell signalling pathways. Permeable ligands are able to diffuse through the plasma membrane and into the cytosol, exerting their effect by either increasing cellular concentrations of that ligand, which can affect feedback mechanisms within the cell or by binding directly with intracellular receptors and proteins; binding of the ligand alters protein function via activation /deactivation of the cellular signalling pathway associated with that ligand, altering the activity of the target cells behaviour(Alberts et al., 2014).

Cell surface receptors and signalling vary depending on the type of tissue they are located on and the particular function of the cell. All ligand-receptor binding causes a conformational change in the receptor that generates he intracellular message (Robert, 2015).

Ligand-receptor binding causes a allosteric conformational change in the receptor, this change in conformation allows for the binding/release of activating/inhibitory molecules, proteins, ions or the formation of protein complexes within the cytosol that initiates the signalling cascade; the specific actions of receptor ligand binding are different depending the cell type, ligand type, and signalling pathway used interpret the ligands message. The essay will discuss the mechanisms of ion-channel-coupled receptors, G-protein coupled receptors and enzyme coupled receptors (Alberts et al., 2014). 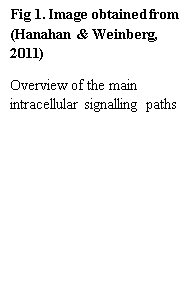 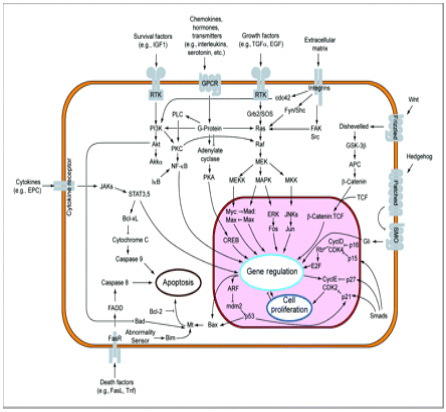 This type of cell signalling is predominantly found in cells that require a rapid response to cellular ion concentrations such as nerve and muscle cells. The influx of the ions from the extracellular fluid creates an increase in the intracellular electrical properties of the cell, essentially changing the extracellular chemical signal into an electrical signal (Alberts et al., 2014). Ion coupled receptors can be up-regulated by other ligands in response to varying concentrations of the ion channels associated ion (e.g. up-regulation of transient receptor potential cation channel 5 (TRPV5) by1,25(OH)2D3 in response to low cellular concentration of Ca2+ ). 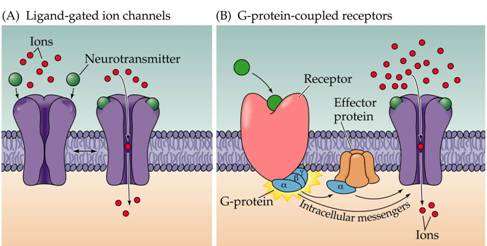 G-protein coupled receptors (GPCR’s) are the most abundant form of cell surface receptor they respond to both extracellular signalling as well as external environmental stimuli, such as light and odour in our optic and olfactory nerve cells. These rececptors relay their signal to heterotrimeric G proteins bound to the cytosic side of the plasma membrane that then activate the intracellular signalling cascade to activate the cellular response. All G-Proteins are able to bind and hydrolyse guanosine triphosphate (GTP)(Robert, 2015).

GPCR’s are imbedded into the plasma membrane with the N terminus and ligand receptor displayed in the extracellular space, the rest of GPCR consists of seven transmembrane α- helices structure extends to and from the extracellular space and cytosolic space in a repeating folded pattern to form three interhelical loops on both sides of the plasma membrane (Fig 2); Binding of a extracellular ligand creates a conformational change that enable the GPCR enabling G-protein binding to the receptor. (Oldham & Hamm, 2008; Ségaliny et al., 2015). GPCR’s can be activated by more than one ligand,; different ligands alter the conformation of the GPCR allowing for the recruitment of ligand specific G-proteins. GPCR’s can also bind other cellular proteins that can alter signalling pathways and receptor function (fig.2). Receptor modification can be altered by arrestins, GPCR kinases and receptor activity modifying proteins (RAMP’s)(Foster et al., 2015) 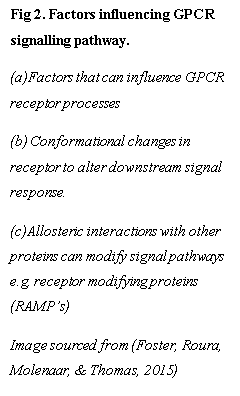 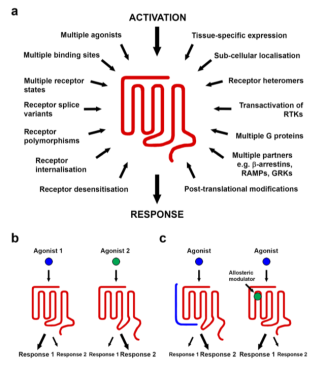 For example the G- protein Gs, when activated by its receptor and binding of GTP, the α subunit of Gs will disassociate from the βγ complex and bind to adenyline cyclase, a cellular protein that rapidly converts adenosine triphosphate (ATP) into cyclic adenosine monophoshate (cAMP). Altered cellular concentrations of cAMP can act in two ways to alter cellular behaviour (1) as a direct messenger molecule (2) by binding to and activating other cellular proteins.

The Gs α subunit is inactivated by hydrolysing the GTP bound to its receptor back to GDP, this causes the disassociation of the α subunit from adenyline cyclase. The α subunit can now rejoin with the β and γ subunits of Gs and reform the inactivated Gs complex, the Gs unit is now able to reactivated upon the binding of a new ligand to the extracellular receptor (Robert, 2015).

Enzyme coupled receptors are trans-menbrane proteins with the ligand receptor site on the extracellular side of the plasma membrane and the enzymatic domain of receptor extending into the cytosol. In its inactive form enzyme coupled receptors exist as a monomer with no enzymatic activity, but upon activation two monomers will crosslink by phosphorylating each other in a process trans-phosphorylation, resulting in the formation of a dimer (Ségaliny et al., 2015). The activated dimer can then increase phosphorylation of tyrosine binding sites on the receptor enabling other intracellular proteins can bind , activating the enzymatic activity to affect downstream cellular processes gene transcription, differentiation etc (Alberts et al., 2014).

An example of an enzyme coupled receptor is receptor tyrosine kinase (RTK), protein kinases regulate cellular process that require the transfer of phosphate from adenosine triphosphate (ATP) to the serine or threonine groups for activation. RTK is a pair of transmembrane proteins that when activated by an extracellular ligand work together to catalyzes the reaction by the binding of phosphate to RTK’s tyrosine binding sites. Enzymatic phosphorylation of the tyrosine binding sites of RTK, allows for the recruitment/binding of extracellular proteins, which activates the protein so that it can now carry out the downstream cellular response (Fantauzzo & Soriano, 2015; Ségaliny et al., 2015). Intracellular proteins that bind with RTK phosphorylatated tyrosine binding sites have enzymatic activity within the cytosol, their binding domains recognize phosphorylated tyrosine receptor chains displayed on RTK’s that can associate with their SH2 or PTB domains (Ségaliny et al., 2015). The proteins that bind with RTK can act as scaffolding, anchoring and adapter proteins, so that other proteins can bind to the available phosphorylated binding sites on the newly assembled protein complex. 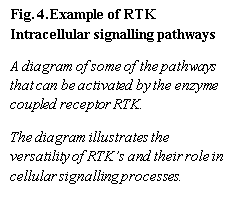 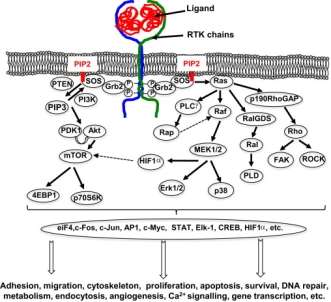 Duodenal enterocytes are the first points of calcium absorption and metabolism. Calcium absorption into the cell is regulated by the ion channel trans-membrane proteins, transient receptor potential cation channel 5 (TRPV5) and TRPV6, these proteins allow calcium ions to move from the lumen into the cytosol of the cell (Yang, Ahn, & Jeung, 2015). Calcium acts as a second messenger in a variety of different cell types and cell signalling mechanisms, for this reason cytosolic Ca2+ is maintained by the duodenal cell at a concentration of approximately 100nM to prevent downstream signalling cascades, interactions with other intracellular proteins and cell death (Carafoli, 1991). Ca2+ influx into the cell through TRPV5 and TRPV6 occurs due to the steep concentration gradient between the extracellular (Ca2+ 1mM) and intracellular (Ca2+ 100nM) environments.

In the duodenal cell Ca2+ concentration acts as a second messenger, partially regulating its own entry and extrusion from the cell by regulation of membrane and cytosolic proteins involved in calcium homeostasis.

Once Ca2+ has entered the cytosol through the TRPV5 and TRPV6 ion channels, circulating transport proteins Calbindin-D9 (CaBP-9k) and CaBP-28k can bind Ca2+. Binding of Ca2+ by CaBP-9k and CaBP-28k has two functions, by binding Ca2+ CaBP-9k acts as a buffer, this maintains the cellular concentration of Ca2+ within normal duodenal cellular range (100nM) maintaining the concentration gradient. Secondly, both CaBP-9k and CaBP-28k binding with Ca2+, shuttle Ca2+ to the basolateral surface of the duodenal cell, this brings Ca2+ in closer proximity to other trans-membrane proteins that facilitate the extrusion of Ca2+ out of the cell . Duodenal CaBP-9k and CaBP-28k are regulated at the transcriptional level by 1,25 dihydroxyvitamin D3 the hormonal form of vitamin D and are up-regulated in response to increased Ca2+ levels within the cell (Choi & Jeung, 2008).

Embedded in the basolateral side of the cell are the trans-membrane proteins Na+/Ca2+-K+ exchangers (NCKX3) and Sodium / Calcium exchangers (NCX1) these proteins are responsible for the extrusion of calcium from the duodenal cell. NCX catalyzes the reaction that allows for the exchange of three Na+ ions to enter the cytosol in exchange for one Ca2+. Similarly, NCKX3 exchanges one Ca2+ and one K+ in-exchange for four Na4+. Plasma membrane calcium ATPase 1b (PMCA1b) is another transmembrane protein located on the basolateral side of the cell. PMCA1b function is the active extrusion of calcium from the cell using ATP to drive the reaction. The extrusion of Ca2+ from these bosolateral proteins maintains the lower Ca2+ concentratin within the cell increasing the influx of Ca2+ from the extracellular environment due to the steep concentration gradient.

The activated form on vitamin D (1,25(OH)2D3) acts as a hormonal chemical messenger upon binding with vitamin D receptor (VDR) activating co-activator proteins and genomic binding sites within the cell nucleus. 1,25(OH)2D3 up-regulates the transcription and synthesis of several trans-membrane proteins, that are responsible for the absorption (TRPV5/TRPV6), transportation (Calbindin-D) and removal of Ca2+ from the cell ( PMCA1b, NCX1 and NCKX3). Vitamin D3, is the primary regulator for all duodenal epithelial Ca2+ trans-membrane proteins (Fig 4.). 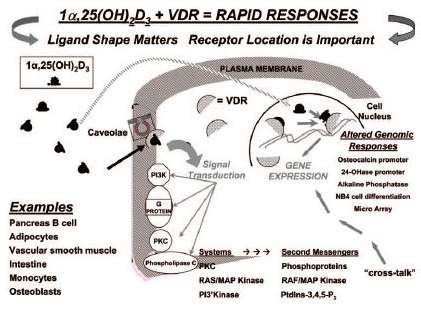 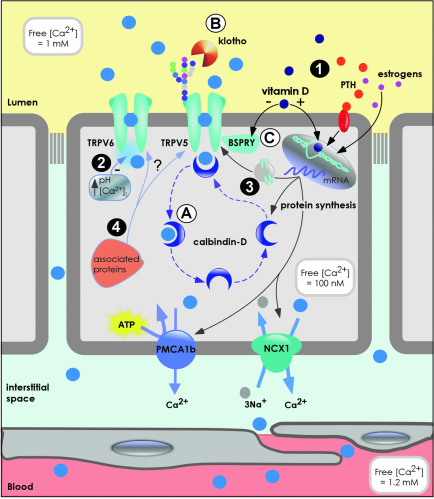 (A)The binding of Ca2+to calbindin-D at the ion channel entry point to act as a buffer for cytosolic Ca2+ concentration and shuttling of Ca2+ to the basolateral membrane.(B)Alteration of trans-membrane ion channels by Klotho enzyme.(C )Possible regulation of ion channel activity by BSPRY via negative feedback of 1,25(OH)2D3.Vitamin D3 has been shown to not only act in the traditional hormonal sense of altering gene expression, but also been shown to be responsible for other rapid “pre-genomic” cellular responses associated with calcium regulation.

Studies using VDR knockout mice (VDR -/-), identified that 1,25(OH)2D3 could still have an effect on the absorption and metabolism of Ca2+ without the need for VDR bound 1,25(OH)2D3 up-regulation of plasma membrane proteins (Doroudi, Chen, Boyan, & Schwartz, 2014) . The role of 1,25(OH)2D3 rapid responses and cell dsignalling pathways is still being fully determined and their exact contribution to calcium homeostasis (Doroudi et al., 2014; Doroudi, Schwartz, & Boyan, 2015).

The 1,25(OH)2D3 receptor protein disulfide isomerise 3 (Pdia3) located in the caveolae of the extracellular plasma membrane, when activated by 1,25(OH)2D3, activates phospholipase A2 activating protein (PLAA). 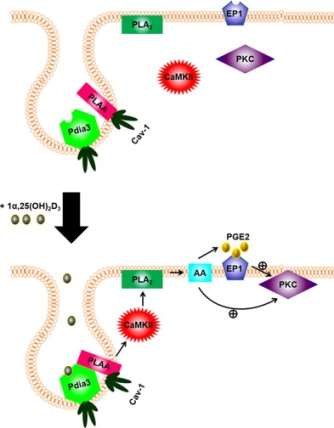 Diagram illustrating the signalling cascade associated with rapid response cell actions to the binding of 1,25(OH)2D3 to Pdia3 receptor in extracellular cavaeloa regulating Ca2+ intake into the cytosol. This signalling pathway is still not fully understood, but is theorized that it regulates cellular Ca2+cellular concentrations, cell differentiation and apotosis.