ATP-binding cassette transporter sub-family C member 8 is a protein that in humans is encoded by the ABCC8 gene.

In slime mold it is a putative uncharacterized protein. The orthologs of this protein have been identified in almost all the mammals which have their complete genome sequenced. The official name of this gene is “ATP-binding cassette, sub-family C (CFTR/MRP), member 8 in humans.” ABCC8 is the gene’s official symbol. The ABCC8 gene instructs the making the sulfonylurea receptor 1 (SUR1) protein in humans that is one part (subunit) of the ATP-sensitive potassium (K-ATP) channel that is found across cell membranes in the beta cells of the pancreas. These Beta cells secrete insulin, a hormone that helps control blood sugar levels. Insulin is the controller of sugar/glucose level that is to be passed from the bloodstream into cells to be used as energy. The K-ATP channel controls the secretion of insulin into the blood stream. These channels open and close in response to the amount of glucose in the bloodstream, which helps to regulate insulin secretion and control blood sugar levels. The closing of the channels results in a process that triggers insulin secretion by beta cells. The change in single amino acids in the protein sequence causes The ABCC8 gene mutations which lead to permanent neonatal diabetes mellitus. These mutations stops the closing of K-ATP channels leading to reduced insulin secretion from beta cells and impaired blood sugar control genes called ABC (ATP-binding cassette transporters).At least 14 mutations in the ABCC8 gene have been identified in people with permanent neonatal diabetes mellitus. The people suffering from this condition often have a low birth weight and develop increased blood sugar (hyperglycemia) within the first 6 months of life. Insulin secretion with advancing age can lead todiabetes mellitus. Therefore, long-term follow-up and periodic OGTTs are important for early detection of insulin dysregulation in congenital hyper insulinism patients carrying theABCC8mutations. ABCC8 mutations can cause MODY which is maturity onset diabetes. Therefore, sequencing of ABCC8 in addition to their known MODY genes should be considered to treat MODY patients. Transient neonatal diabetes mellitusis another and very rare form of diabetes is also caused by the Mutation in ABCC8 which is diagnosed in the first 6 months of life. TNDM is differentiated from permanent neonatal diabetes mellitus (PNDM) by its remission in infancy or early childhood, with a possible relapse during adolescence.ABCC8 PROTIEN slime mold is being modeled to understand its structure.

The sequence of ABCC8 protein of slime mold which consists of 1560 amino acids was downloaded for structural modeling from UniProtKB /Swiss-Prot via Prot Pram the physical and chemical properties of the sequence were calculated. The parameters of the given protein that were computed includes the molecular weight, theoretical pI, amino acid composition, atomic composition, extinction coefficient, estimated half life, instability index, aliphatic index and grand average of hydropathicity (GRAVY).

The prediction for membrane-spanning regions and the orientation were made via TMHMM (1998 by Anders Krogh) and TMpred they are servers that are programmed to statistically analyzes the sequence.

The prediction were made using a combination of several weight-matrices for scoring (Hofman and Stoffel, 1993) they were used to validate the TM region of ABCC8 protein. TMHMM uses hidden Markov model method to predict of membrane protein topology. The prediction of Secondary structure of ABCC8 was taken from the (Chou and Fasman (1974) Biochem., 13:222-245) it’s a server that analyzes the relative frequencies of eachamino acidinalpha helices,beta sheets, andturnsbased on knownprotein structuressolved withX-ray crystallography. A secondary Structure of accuracy of 84.6% is achieved. As this is long amino acid protein so PSIPRED and Jpred tools were not able to process it as whole sequence. SABLE, a server for improved prediction of secondary structures uses evolutionary profiles and predicts relative solvent accessibility of an amino acid residue as a fingerprint of the overall packing (Adamczak et al., 2005) .coils were predicted via server named as COILS.

No x-ray crystallographic or NMR structure of this protein of Slime mold source has ever been done so homology modeling was performed to build a comparative model. The procedure has four steps

The comparative model of ABCC8 was built using a

The model that was obtained by SWISS MODEL AND PHYRE 2 and was verified using different programs.

The analysis of ABCC8 by Protparam that was done to find the physical and chemical properties of it showed us that the number of amino acids was 1560, molecular weight was 174952.2 and theoretical pI was 6.19. The amino acid composition showed that, the number of Alanine (a) was the highest, that is, 89(5.7%), number of negatively charged residues (aspartic acid and glutamic acid) was 168, number of positively charged residues (Arginine, Lysine) were 156, instability index was 38.24 which classifies the protein as stable, aliphatic index was 104.26 and the grand average of hydropathicity was 0.061.

Different servers were accessed for accurate prediction analysis of trans membrane region such as TMHMM and TMpred. Two models were predicted we considered the model with 15 strong Trans membrane helices the strongest trans membrane was from 1132 to 1156 with the score of 2623. 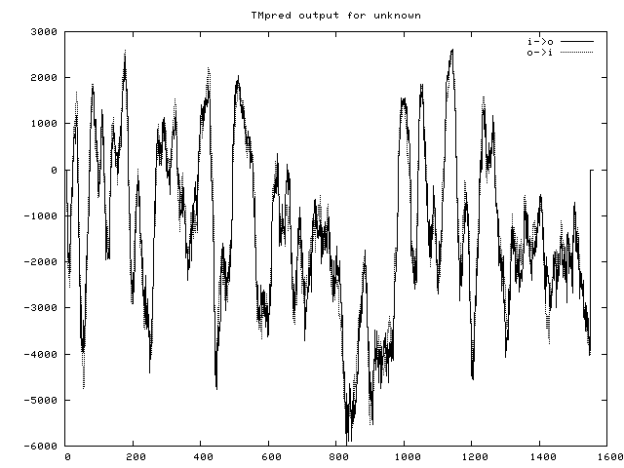 Many programs are available to predict the secondary structure the program We selected were Chou and Fasman (1974) Biochem., 13:222-245 and SABLE. 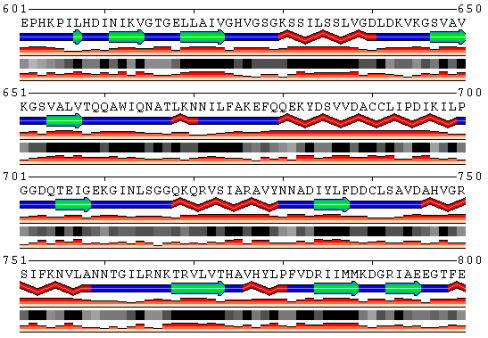 Figure2 is SABLE result the green are beta sheets, red are alpha helices and blue ones are coils or turns it also shows that more helices are present.

The residues that were selected are given in table 2 along with beta sheets and coils.They are the main structures in protein structure prediction. Coils were also calculated via coil prediction program named as COILS. The result is given in figure 3.

The peaks are formed where there is the chance of coils. 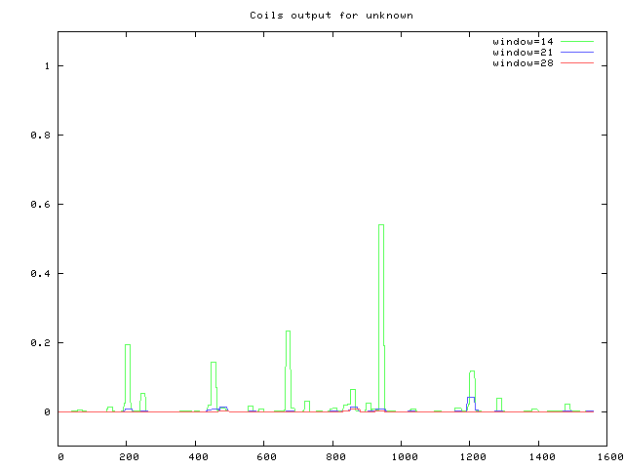 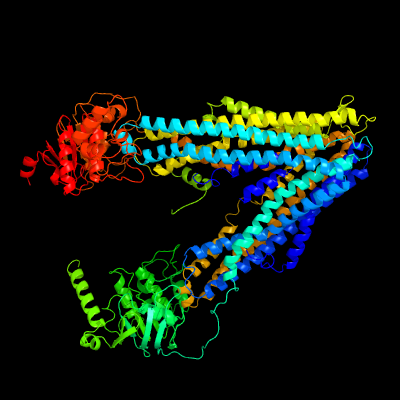 3D structure of ABCC8 was made using phyre2 and SWISSMODEL.

1180 residues 76% of the sequence was modeled with 100.0% confidence by the single highest scoring template.

Figure :5 swiss model structure of abcc8 which is showing helices and beta sheets

The template modeled residue range was 590 to 816.

The sequence model coverage is shown in 4 lines. The top line represents the sequence identity of template with the target and if it is greater than 30%, it is shown by green color as shown. If less than 30%, it is represented by red color .The second line which represents the template to target E-value is shown by green if E-value < = 0.0001 and is shown by red if E-value>0.0001 .the third line is green if model score is ≥0.7 and is red if <0.7 (Pieper et al., 2004).

The modeled region is represented by the last line of the sketch (Pieper et al.,2004).

Our protein showed us 1st line in green and other three in blue which means our model is stable and is close to accurate. The E-value of our protein is 0.00e-1.

The overall summary of ABCC8 protein obtained from

SWISSMODEL classified as strands, 846 helices and113 turns. And PHYRE 2 covers shows us that alpha helices cover 62% of the structure and beta strands cover 7% while 16% are turns.

QMEAN score was also calculated The QMEAN4 score is a composite score consisting of a linear combination of 4 statistical potential terms (estimated model reliability between 0-1). 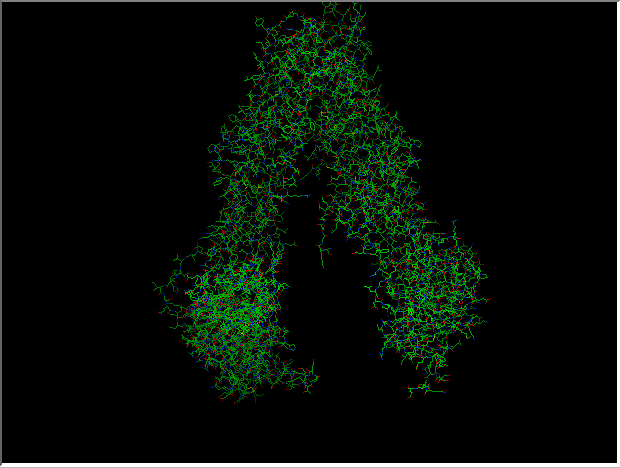 The super position of PHYRE 2 and SWISSMODEL was done via online tool known as SuperPose v1.0 (2004) and it gave almost same kind of structure.

ANOLEA , GROMOS and QMEAN were used to validate the model 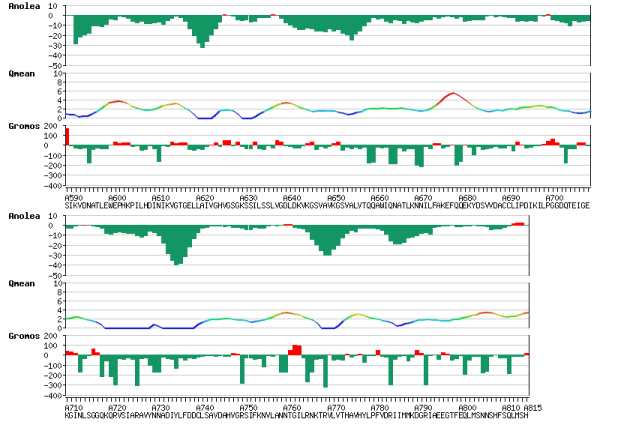 The Knowledge of the three-dimensional structure of ABCC8 would greatly advance the development of novel lead compounds targeting this molecule. As the structure of ABCC8 protein is known from this study, novel lead compounds can be designed on the basis of ligand protein interaction (docking) scores of available antiepileptic drugs defining the highest dock able compound and designing various analogues of the presently available drugs or defining a novel molecule on the basis of different binding sites. New drugs can be designed to fight neonatal diabetes.

But for further studies its accuracy should be checked first.

This structure was made using online tools to structure proteins.