The female reproductive system contains 2 ovaries, uterus, cervix and a vagina. Ovaries contain the female gametes which in form is the mares primary follicles.

The Uterus is a hollow muscular ‘Y’ shaped organ. It contains two horns each 25cm long and has a body of 18cm and diameter of 10cm. The neck of the uterus is also known as the cervix. The uterine wall consists of three layers. An outer serous layer which helps suspend the uterus in position in the mare. A muscular layer which has layers of fibres capable of strong contraction. An endometrium layer which is comprised of tissue, glands and their ducts.

The cervix is a thick inelastic organ that acts as a seal at the entrance of the uterus. When the mare is not in season it is tightly closed and when the mare is in season or about to give birth it is more relaxed. It is about 7cm long and about 4cm in diameter. The cervix acts as a block and can help prevent infection from entering the uterus.

The vagina is the passageway between the vulva and the cervix and is about 20cm in length and up to 12cm wide. Its walls are made up of muscular and mucous coats. The vaginais hostile to sperm and seemen needs to be transported to the cervix very quickly otherwise they will die in the vagina.

The Vulva is covered by mucous membrane and is located in front of the vagina and is about 7cm in length below the anus. The testes are contained in the scrotum and are two oval shaped balls measuring 12cm in length and weighing about 300grams. Each testical is connected by the spermatic cord which is made up of blood vessels, muscle, nerve cells and connective tissues.

The epididimus is a ‘U’ shaped structure which is attached to the top of the testis. It is responsible for concentrating and storing the sperm. The epididimus is made up of several tubes which unite to form a single epididimal duct in the body of the epididimus.  The duct passes on into the tail which then enters the vas defenders.

The vas defenders is a muscular which carries the sperm and fluids from the epididimus to the urethra. The sperm then passes through the inguinal canal as part of the spermatic cord separating then to form other spermatic vessels and runs back towards the pelvic cavity. It unites with the urethra to enter the penis.

The penis is used to deposit semen into the mares reproductive tract. The penis is rich in blood supply and is composed of erectile tissue. A no erect penis is protected by a sheath unless the stallion is passing urine.

The accesory sex glands comprise of the vesticular gland, the prostate gland and the bulbo-uretheral gland. Ejaculations can have up to 90% secrete fluid and a minimum of 60%. Sperm is produced in a stallions testicles and then development of each sperm takes about 60 days. A fertile stallion will produce billions of sperm cells daily. When a sperm cell matures it is released from the tubule and travels through to the epididimus. The mature semen is stored in the epididimus until the stallion ejaculates. When the stallion ejaculates the mature sperm is transported through the urethra into the mares uterus. Semen is made up of specialised fluids from accessory glands that contribute to the final product.

During the breeding season a non pregnant mare will have recurring cycles. The length of each cycle is determined from ovulation to ovulation. The cycle consists of an estrous phase (where the mare will accept the stallion) and a diestrus phase (where the mare is not receptive to the stallion). The diestrus phase will end with the regression of the Corpus Luteum (CL). On average the length of a mares Oestrus cycle is 21 days. Mares tend to be in diestrus for 14 days and oestrus for 7 days. Follicles are measured in diameter and grow during the oestrus period larger follicles present at corpus luteum tend to ovulate sooner. The pattern of the oestrus cycle depends on the balance of hormones produced by the pineal gland, hypothalamus, pituitary gland, ovaries and endometrium.

Hormones control many aspects of the mares reproductive activities. The oestrus cycle is repeated throughout the reproductive life and is only interrupted by pregnancy.the oestrus cycle commences at puberty and again after foaling. Gonadotropins are released into the vascular system. LH is then transported to the developing follicle which then produces testosterone. The mare will then produce oestrogens at the cells of the follicle which prepare the female tract for mating. Ovulation occurs when estrogen levels become very high thus releasing lh. The surge of LH will initiate the changes to the follicle. The corpus luteum is formed by the effects LH has on ovulation that transforms the granulosa cells to luteal cells which intern then produces progesterone. Progesterone is necessary for implantation to occur and affects the level of oestrogen on the female tract preparing it for pregnancy. During pregnancy it is important that the progesterone level stays high in order to prevent oestrus and to stop the mare cycling.

During the average 21 day cycle of a mare they will go through estrus and anestrus (in season or out of season) stages through the cycle. These behavioural traits can be examined by scanning the mare or tested by introducing a teaser stallion.  When a mare is not in season they can be aggressive towards a teaser pony. Signs of this include attempting to get away from the teaser, biting the teaser, kicking at the teaser or protective board, squealing, swishing of the tail and there vulva will look dry and tense. By examining a mare not in season typically you will find presence of corpus luteum when scanning their ovaries. Follicles will vary in size. There uterus will have good tone of firm texture. A mares cervix will be firm and long and narrow, closed lumen on examination of the vagina. A mare in season will act very differently around a stallion or teaser and signs of this include, backing into the board or the teaser, squatting and tipping their pelvis, winking of the clitorus, raising their tail, urinating a creamy cloudy urine. By examining a mare in season they will produce large soft follicles nearing ovulation and no corpus Luteum on examination. There uterus should be relaxed with a soft texture. A mares cervix will also be relaxed, shortening and widening. The cervix will be pink and drooping on the vaginal floor. 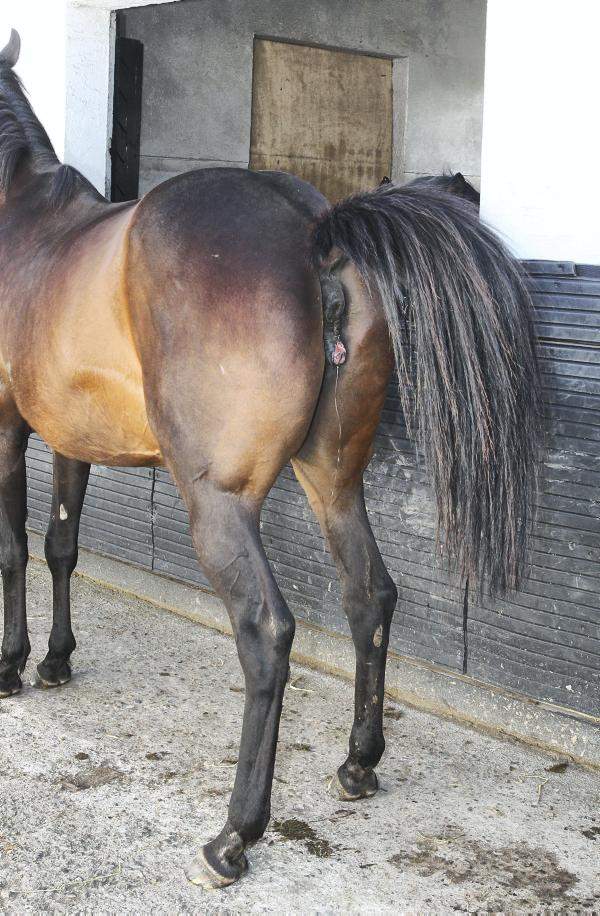 There are numerous ways that human intervention can manipulate the oestrus cycle of a mare. Particularly in the winter months it can be difficult to get mares to start cycling properly. Methods used include keeping mares warm by having them well rugged up, good lights in the barn at night to prolong the light a mare receives. Another method of this is an equilume mask which is said to stimulate early reproductive activities in the mare and promote their oestrus cycle. Regumate can also be used to shut down mares in order to restart their cycle. After a mare has been covered a luteinizing hormone can be administered in order to speed up the mares ovulation of the follicle. This is administered into the bloodstream post cover and can take up to 36 hours to be effective. Mares can be short cycled through the use of prostaglandin this helps to speed up the mares cycle. This is administered into the muscle and often tends to leave the mare in a sweat.

Embryo from fertilization to foaling

After the mare has been inseminated with seemen a new organism is formed from the sperm and egg coming together. The egg and the sperm are destined to die within minutes or hours unless they find each other to begin there developmental programme. It is through fertilization, the egg and sperm are saved. Fertilisation occurs in the fallopian tube. Pregnancy begins when the ovum is fertilized and ends at its birth. The reservoir within the ampulla releases a few sperm on a continuous basis so that fertilization can occur after the arrival of oocytes within the oviduct. The Zygote a single cell entity is where the fertilisation of the genetic material of the parents is brought together.Only the Zygote descends into the uterus. The zygote is a very important structure although it is short lived. The Zygote produces a two celled embryo after it undergoes its first cleavage. Cleavage is the process where a zygote subdivides into smaller cells.  The average mares gestation extends for 11 months and begins at the fertilisation stage and ends when the offspring is born. Between these 11 months the foetus is given time to develop and grow and be mature enough to survive.