Discuss the ‘gene-editing’ technologies in the context of current regulatory and/or ethical dilemmas posed by new approaches:

Advances in biotechnology are improving the wellbeing and quality of life for human kind at a remarkably rapid rate. However, with emerging therapies and treatments, ethical conversations and controversy is being raised amongst the community. A particular example of this is gene therapy. Gene therapy involves: “inducing a directed and specific modification in the DNA sequence of humans or other living beings,” (de Lecuona, Casado, Marfany, Baroni & Escarrabill, 2017). This occurs through adding, deleting or substituting nucleotides at specific locations in the genome (de Lecuona, Casado, Marfany, Baroni & Escarrabill, 2017). Gene therapies are no longer in the basic research stage, but are progressing to clinical trials (Lynch, 2019). As of May 2019, there were almost 3000 clinical trials registered, while 300 of these are progressing to Phase III (Lynch, 2019). This essay will analyse the current ethical, legal, social and safety issues related to the innovative gene editing technology that is emerging.

Somatic gene editing is the first form of technology that is currently taking interest and excitement amongst the scientific community. Somatic gene therapy can be defined as, “the transfer of genes into the somatic cells of the patient… The genes transferred are usually normal alleles that could ‘correct’ the mutant or disease alleles of the recipient,” (The Open University, 2019). Outlined in Figure 1, the method of somatic gene therapy involves inserting normal genes cloned in bacteria into cells of an affected individual, thus correcting the disease (The Open University, 2019). This usually occurs through inserting the DNA into the genetic material of a virus or by wrapping the DNA in fat-like liposomes. The most commonly used target cells are bone marrow, lungs, muscles or the liver. Bone marrow is often use as it is a cultured cell that is easily isolated and distributed back into the blood (The Open University, 2019). However, the hurdle that is being investigated is the safety of the technology (The Guardian, 2015). The main ethical issue with somatic gene editing is termed ‘off-targeted’ editing errors, which cut, select or edit the incorrect section of DNA (The Guardian, 2015). Another ethical dilemma with somatic gene editing is the premises of deciding what gene traits are “normal” and if any deviation from the norm should be classified as a disease. An example common example used to demonstrate this ethical argument is with the genetic trait of deafness (National Academies of Sciences, Engineering, and Medicine, 2017). For some this genetically caused condition is seen as a disease and for others this is a characteristic that improves diversification (National Academies of Sciences, Engineering, and Medicine, 2017). The ideology that this condition is a disease and needs to be cured can be seen as offensives especially for members of this community (Ormond et al., 2017). Therefore, ethical considerations including an acceptable risk/benefit ration, informed consent and regulatory approvals should be adhered to with any somatic gene editing enhancement procedure (Kohn, Porteus & Scharenberg, 2016).

The second gene editing technology is commonly referred to as CRISPR-Cas9 (Clustered Regularly Interspaced Short Palindromic Repeats – associated protein-9 nuclease) and is a fast, cheap and simple, so thus being researched and improved at a rapid rate (Rutherford & Jones, 2019) (Reis, Hornblower, Robb & Tzertzinis, 2019). The functionality of CRISPR genes allow organism to recognise, respond and reduce invading genetic material (Reis, Hornblower, Robb & Tzertzinis, 2019), which was confirmed in 2007. It was discovered and confirmed that these genes play an essential role in adaptive immunity by proof that S. thermophiles integrates a genome fragment of an infectious virus into the CRISPR locus and thus acquires resistance (Reis, Hornblower, Robb & Tzertzinis, 2019) (US National Library of Medicine, 2019). These bacteria had the ability to protect itself from infection by slicing DNA, storing fragments of the virus from previous infections and use the CRISPR enzyme to source and cut the virus DNA (van der Oost, Westra, Jackson & Wiedenheft, 2014) (Crossley, 2018). To edit the DNA sequence by using CRISPR, the enzyme needs to locate the DNA sequence target by using guide RNA (See Figure 2) (Crossley, 2018). This search sequence guides the Cas9 enzyme to the site to edit and cuts the DNA strand at the targeted location. The DNA will then repair the cut fragment by re-joining the ends and leaving the deleted section, or by patching the gap with any available DNA (Crossley, 2018) (US National Library of Medicine, 2019). The first recorded evidence of use of germline editing was in 2014, where a Chinese research centre at the University of Sun Yat-Sen released an article that proved significantly unsuccessful (Centre for Genetics and Society, 2016). The report outlined the use of CRISPR technology to edit non-viable human embryos targeting a gene associated with beta-thalassemia (Centre for Genetics and Society, 2016) (US National Library of Medicine, 2019). Although the report did not generate the results expected, this then led to this technology being refined, made cheaper, more accurate and easier to use as a result (Centre for Genetics and Society, 2016). The germline debate is at peak discussion in 2019 due to these rapid and promising advances (Nature Research, 2019) (Ormond et al., 2017). Regulation and rules surrounding research need to be put into place to reduce the devastating effects that this technology has the potential to create (Lanphier, Urnov, Haecker, Werner & Smolenski, 2015) (Nature Research, 2019).

It is often said that if the exact outcome of therapies and therapeutics cannot be predicted, then it is unethical to perform those procedures on human life (Lanphier, Urnov, Haecker, Werner & Smolenski, 2015). Germline gene editing affects either the sperm, egg or zygote cells that ultimately make an impact on the future generations and the grave concern from the general public is that this technology will be used for enhancement and non-therapeutic purposes (Lanphier, Urnov, Haecker, Werner & Smolenski, 2015) (Caplan, Parent, Shen & Plunkett, 2015). This leads to the ‘designer baby’ discussion that has been thrown around for the last decade (Lanphier, Urnov, Haecker, Werner & Smolenski, 2015). Some countries have put a total ban on the use of technology such as CRISPR to modify the germline genes as the ethical, legal and safety issues are far too great of risk to even attempt (Caplan, Parent, Shen & Plunkett, 2015). However, it is important to remember that there has to be a catalyst and reason behind any research being conducted and although germline gene editing may be used in an enhancement format, it may also be used for the greater good of improving the devastating affects of genetic diseases (Kohn, Porteus & Scharenberg, 2016). Researchers’ aim is to find a cure, prevention, therapeutics or treatments that will improve the wellbeing and quality of life of these patients (Ormond et al., 2017) (Caplan, Parent, Shen & Plunkett, 2015).

Although only in theoretical stages, it is widely accepted that germline gene editing technology could have the potential to correct disease-causing mutations to prevent the development of diseases and/or genetic conditions. This could hypothetically result in the complete eradication and correction of genetic defects in the gene pool, and thus for all future generations as well. Modified genomes entering the human gene pool would result due to the alteration of germline genes. This alteration aims to eliminate pathogenic mutations, but raises multiple ethical concerns and alarms, which are outlined in Figure 4 (Kohn, Porteus & Scharenberg, 2016). 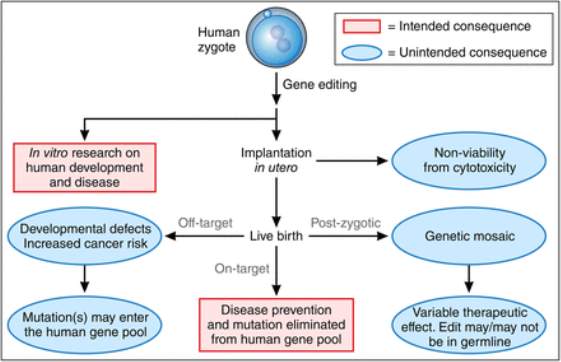 This essay analyzed the current state of gene editing technologies within the biotechnology industry. Somatic gene editing was first investigated, the basics of the technology were understood and the ethical implications were outlined. These included the concept of enhancement gene editing and the improvements made to the human genome, especially in relation to non-hereditary genetics and off targeted gen editing and the negative consequences of these errors (Gyngell, Douglas & Savulescu, 2016). Additionally, CRISPR technology especially in its use in germline gene editing was investigated to uncover the current ethical, legal, social and safety issues (van der Oost, Westra, Jackson & Wiedenheft, 2014). The main ethical concerns include the act of making changes to the germline genes would thus create a domino effect on every generation to follow, and the risks are not fully understood. Additionally there are multiple consequences of these errors such as non-viability, developmental defects and additional mutations entering the gene pool. Finally, in 2016 the OBD released a research paper analysing the ethical, social and legal implications of genome editing techniques (Nature Research, 2019). The main findings of the report called for a governing body to establish a clear framework, boundaries and legal guidelines in relation to all gene editing technology research, especially when germ line cells are involved (Nature Research, 2019) (Meagher, 2019).