On-line self-testing is the solution for detecting permanent and intermittent faults for non safety critical and real-time embedded multiprocessors. This paper basically describes the three scheduling and allocation policies for on-line self-testing.

Real-time systems are very important parts of our life now a day to day. In the last few decades, we have been studied the time aspect of computations. But in recent years it has increase exponentially among the researchers and research school. There has been an eye catching growth in the count of real-time systems. Being used in domestic and industry production. So we can say that real-time system is a system which not only depends upon the correctness of the result of the system but also on the time at which the result is produced. The example of the real-time system can be given as the chemical and nuclear plant control, space mission, flight control systems, military systems, telecommunications; multimedia systems and so on all make use of real-time technologies.

Testing is a fundamental step in any development process. It consists in applying a set of experiments to a system (system under test − SUT), with multiple aims, from checking correct functionality to measuring performance. In this paper, we are interested in so-called black-box conformance testing, where the aim is to check conformance of the SUT to a given specification. The SUT is a “black box” in the sense that we do not have a model of it, thus, can only rely on its observable input/output behavior.

Real time is measured by quantitative use of clock (real clock)[1].Whenever we quantify time by using the real clock we use real time. A system is called real time system when we need quantitative expression of time to describe the behavior of the used system. In our daily lives, we rely on systems that have underlying temporal constraints including avionic control systems, medical devices, network processors, digital video recording devices, and many other systems and devices. In each of these systems there is a potential penalty or consequence associated with the violation of a temporal constraint.

a. ONLINE SELF TESTING

Online self-testing is the most cost-effective technique which is used to ensure correct operation for microprocessor-based systems in the field and also improves their dependability in the presence of failures caused by components aging.

Deep submicron technology means, the use of transistors of smaller size with faster switching rates[2]. As we know from Moore’s law the size of transistors are doubled by every year in a system, the technology has to fit those inc in transistors in small area with better performance and low-power[4].

1.The Architecture of the DIVA Processing In Memory Chip

The DIVA system architecture was specially designed to support a smooth migration path for application software by integrating PIMs into conventional systems as seamlessly as possible. DIVA PIMs resemble, at their interfaces, commercial DRAMs, enabling PIM memory to be accessed by host software either as smart memory coprocessors or as conventional memory[2]. A separate memory to memory interconnect enables communication between memories without involving the host processor.

A parcel is closely related to an active message as it is a relatively lightweight communication mechanism containing a reference to a function to be invoked when the parcel is received. Parcels are transmitted through a separate PIM to PIM interconnect to enable communication without interfering with host memory traffic. This interconnect must support the dense packing requirement of memory devices and allow the addition or removal of devices from system.

Each DIVA PIM chip is a VLSI memory device augmented with general purpose computing and communication hardware[3]. Although a PIM may consist of multiple nodes, each of which are primarily comprised of few megabyte of memory and a node processor.

limiting acceptance of CMPs in some types of systems. 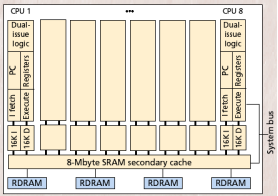 Fig.2: The above figure shows the CMP Architecture[6]

Future systems will have to support multiple and concurrent dynamic compute-intensive applications, while respecting real-time and energy consumption constraints. Within this framework, an architecture, named SCMP has been presented[5]. This asymmetric multiprocessor can support dynamic migration and preemption of tasks, thanks to a concurrent control of tasks, while offering a specific data sharing solution. Its tasks are controlled by a dedicated HW-RTOS that allows online scheduling of independent real-time and non real time tasks. By incorporating a connected component labelling algorithm into this platform, we have been able to measure its benefits for real-time and dynamic image processing.

In response to an ever increasing demand for computational efficiency, the performance of embedded system architectures have improved constantly over the years. This has been made possible through fewer gates per pipeline stage, deeper pipelines, better circuit designs, faster transistors with new manufacturing processes, and enhanced instruction level or data-level parallelism (ILP or DLP)[7].

An increase in the level of parallelism requires the integration of larger cache memories and more sophisticated branch prediction systems. It therefore has a negative impact on the transistors’ efficiency, since the part of these that performs computations is being gradually reduced. Switching time and transistor size are also reaching their minimum limits.

The SCMP architecture has a CMP structure and uses migration and fast preemption mechanisms to eliminate idle execution slots. This means bigger switching penalties, it ensures greater flexibility and reactivity for real-time systems.

The programming model for the SCMP architecture is specifically adapted to dynamic applications and global scheduling methods. The proposed programming model is based on the explicit separation of the control and the computation parts. Computation tasks and the control task are extracted from the application, so as each task is a standalone program. The control task handles the computation task scheduling and other control functionalities, like synchronizations and shared resource management for instance. Each embedded application can be divided into a set of independent threads, from which explicit execution dependencies are extracted. Each thread can in turn be divided into a finite set of tasks. The greater the number of independent and parallel tasks are extracted, the more the application can be accelerated at runtime.

When the OSoC receives an execution order of an application, its Petri Net representation is built into the Task Execution and Synchronization Management Unit (TSMU) of the OSoC. Then, the execution and configuration demands are sent to the Selection unit according to application status. They contain all 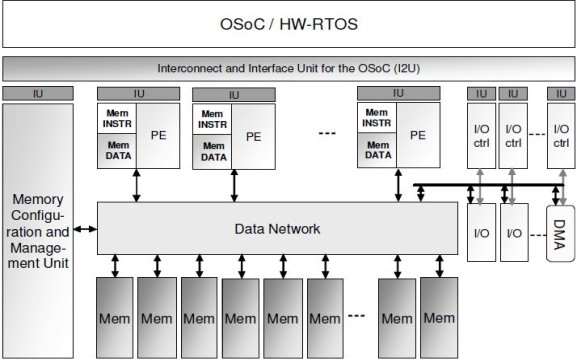 We have done a survey how on-line self-testing can be controlled in a real-time embedded multiprocessor for dynamic but non safety critical applications using different architectures. We analyzed the impact of three on-line self-testing architectures in terms of performance penalty and fault detection probability. As long as the architecture load remains under a certain threshold, the performance penalty is low and an aggressive self test policy, as proposed in can be applied to

should consider the scheduling decision for

mitigating the overhead in detriment to fault

detection probability. It was shown that a policy that periodically applies a test to each processor in a way that accounts for the idle states of processors, the test history and the task priority offers a good trade-off between the performance and fault detection probability. However, the principle and methodology can be generalized to other multiprocessor architectures.