Abstract— One of the major tasks in predicting the secondary structure of a protein is to find the β-turns. Functional and structural traits of a globular protein can be better understood by the turns as they play an important role in it. β-turns play an important part in protein folding. β-turns constitute on an average of 25% of the residues in all protein chains and are the most usual form of non-repetitive structures. It is already known that helices and β-sheets are among the most important keys in stabilizing the structures in proteins. In this paper we have used hidden Markov model (HMM) in order to predict the β-turns in proteins based on amino acid composition and compared it with other existing methods.

Bioinformatics has become a vital part of many areas of biology. In molecular biology, bioinformatics techniques such as signal processing or image processing allow mining of useful results from large volumes of raw data. In the field ofgeneticsandgenomics, it helps in sequencing and explaining genomes and their perceivedmutations. It plays an important part in the analysis of protein expression, gene expression and their regulation. It also helps in literal mining of biological prose and the growth of biological and gene ontologies for organizing and querying biological data. Bioinformatics tools aid in the contrast of genetic and genomic data and more commonly in the understanding of evolutionary facets of molecule based biology. At a more confederated level, bioinformatics helps in analyzing and categorizing the biological trails and networks that are an significant part of systems biology. In structural biology, bioinformatics helps in the understanding, simulation and modelling of RNA, DNA and protein structures as well as molecular bindings.

The advancements in genome has increased radically over the recent years, thus resulting in the explosive growth of biological data widening the gap between the number of protein sequences stored in the databases and the experimental annotation of their functions.

There are many types of tight turns. These turns may subject to the number of atoms form the turn [1]. Among them is β-turn, which is one of the important components of protein structure as it plays an important part in molecular structure and protein folding. A β-turn invokes four consecutive residues where the polypeptide chain bends back on itself for about 180 degrees [2].

Basically these chain reversals are the ones which provide a protein its globularity rather than linearity. Even β-turns can be further classified into different types. According to Venkatachalam [3], β-turns can be of 10 types based on phi, psi angles and also some other. Richardson[4] suggested only 6 distinct types(I,I’,II,II’,VIa and VIb) on the basis of phi, psi ranges, along with a new category IV. Presently, classification by Richardson is most widely used.

Turns can be considered as an important part in globular proteins in respect to its structural and functional view. Without the component of turns, a polypeptide chain cannot fold itself into a compressed structure. Also, turns normally occur on the visible surface of proteins and therefore it possibly represents antigenic locations or involves molecular recognition. Thus, due to the above reasons, the prediction of ß-turns in proteins becomes an important element of secondary structure prediction.

A lot of work has been done for the prediction of β-turns. To determine chain reversal regions of a globular protein, Chou at al. [5] used conformational parameters. Chou at al. [6] has given a residue-coupled model in order to predict the β-turns in proteins. Chou at al. [7] used sequence of tetra peptide. Chou [8] again predicted tight turns and their types in protein using amino acid residues. Guruprasad K at al. [9] predicted β-turn and γ-turn in proteins using a new set of amino acid and hydrogen bond. Hutchinson at al. [10] created a program called PROMOTIF to identify and analyse structural motifs in proteins. Shepherd at al. [11] used neural networks to predict the location and type of β-turns. Wilmot at al. [12] analysed and predicted different types of β-turn in proteins using phi, psi angles and central residues. Wilmot at al. [13] proposed a new nomenclature GORBTURN 1.0 for predicting β-turns and their distortions.

This study has used hidden Markov model to predict the β-turns in the protein. HMM has been widely used as biological tools. 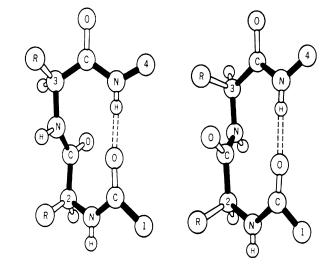 The dataset used in the experiment is a non-redundant dataset which was previously described by Guruprasad and Rajkumar [9]. This dataset contains around 426 non-homologous protein chains. All protein chains do not have more than 25% sequence similarity. It is basically to ensure that there is very little correlation in the training set. In this dataset, each protein chain contains at least one beta turn and has X-ray crystallography with resolution 2 or more.

The dataset shows there are mainly ten classes and other classes are made using the combination of these ten classes.

In our work, we have used the probabilistic feature of HMM for β-turns prediction. A model is presumed that ruminate the protein sequence being generated with a stochastic process that alternates amid two hidden states: “turns” and “non-turns”. The HMM is trained using 20 protein sequences.

There are more than ten classes and this HMM model parameter is estimated in2 super states and the training was performed.

Let P be a protein sequence of length n, which can also be expressed as

Where ri is the amino acid residue at sequence position i. The sequence is considered to be generated from r1 to rn in hidden Markov model. The model is trained using Baum-Welch algorithm [15].

Baum-Welch algorithm is a standard method for finding the maximum likelihood estimation of HMMs, in which posterior probabilities were performed by using both forward and backward algorithms. These algorithms were used to compile the state transition probability and emission probability matrices.

The initial probabilities are calculated, taking into account a correlation between residues in different position. The most probable path is calculated using Viterbi algorithm [16] as it automatically segments the protein into its component regions.

Once the prediction of β-turns is performed using the hidden Markov model, the problem arises of finding an appropriate measure for the quality of the prediction. Four different scalar measures are used to assess the models performance [17]. These measures can be derived four different quantities:

The predictive performance of the HMM model can be expressed by the following parameters:

MCC (Matthews Correlation Coefficient) [18] is a measure that counts for both over and under- predictions.

Qpredicted , is the percentage of β-turn predictions that are correct.

Qobserved is the percentage of observed β-turns that are correctly predicted.

This model is used to predict the β-turns and is based on hidden Markov model.

There are basically two classes: turns and non-turns. It is used to predict one protein sequence at a time. It has been observed that it performs better than some existing prediction methods.

B. Comparison with other methods

In order to examine of this method, it has been compared with other existing methods as shown in table 2. 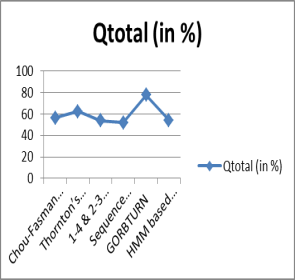 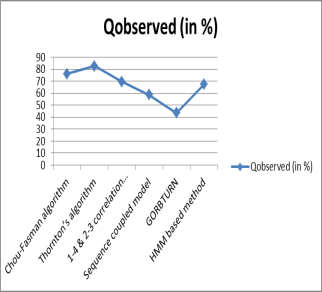 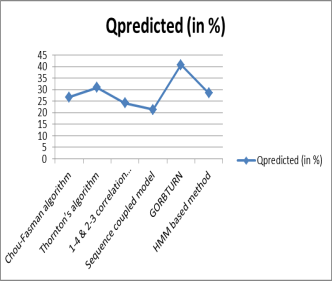 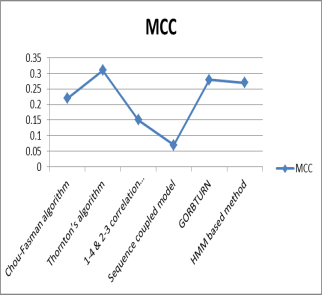 Table 2 Comparison with other methods

In this paper, we presented a way in which HMM can be used to predict β-turns in a protein chain. Our method is used to predict turns and non-turns of single protein sequence at a time. The results thus obtained are better than some of the other existing methods. The performance of the β-turns can further be improved by considering other techniques such as using predicted secondary structures and dihedral angles from multiple predictors or by using feature selection technique [19] or by considering combination of many features together. We can also combine different machine learning techniques together to improve the performance of the prediction.