“The minor assessment is centred around Toyota’s annual report. Each student is expected to submit a case report, based also on the analysis of relevant background readings in addition to the case study itself, addressing the following issues: · Explain what is meant by the term “decision-making” and analyse it in connection with the concepts of risk and uncertainty. · Discuss the decision-making process at Toyota. · Briefly analyse the automotive industry and explain how its dynamics influence Toyota’s managers in making decisions. · Apply forecasting models to Toyota case study (e.g. provide a 2-year moving average graph using sales data).”

Risks and uncertainties in decision-making process 2

We can define decision-making, as a conscious and human process, involving both individual and social phenomena, an ongoing process of evaluating alternatives for meeting an objective. A particular course of action to select that course of action most likely to result in attaining the objective.

The decision-making process allow us to raise our vision beyond our immediate concerns and, in turn, allow us to evaluate our existing beliefs an actions in a new light in order to make an important and useful decision. Achieving an objective requires action leading to a desired outcome. In theory, how one proceeds should inevitably affect what one achieves, and in turn this should affect future actions.

Risks and uncertainties in decision-making process

The ability of a firm to absorb, transfer, and manage risk is critical in management’s decision-making process when risky outcomes are involved. This will often define management’s risk appetite and help to determine, once risks are identified and quantified, whether risky outcomes may be tolerated. For example, many financial risks can be absorbed or transferred through the use of a hedge, while legal risks might be mitigated through unique contract language. If managers believe that the firm is suited to absorb potential losses in the event the negative outcome occurs, they will have a larger appetite for risk given their capabilities to manage it.

Managing uncertainty in decision-making relies on identifying, quantifying, and analyzing the factors that can affect outcomes. This enables managers to identify likely risks and their potential impact.

Decision makers are used to assessing risk because decision-making is usually associated with some degree of risk taking, but not all outcomes are easily assessed. Some unknown outcomes may not previously have been seen or experienced and so they are uncertain. In theory the outcome may have a low probability to occur but if so would happen it could be troublesome.

So it is important for every company, especially in ever changing and competitive markets to deal with risks using a ever-better decision-making process. All of the decisions anyhow are taken by individuals so the strategy for risk avoidance is tied in with a personal reference point. Of course it’s fundamental nowadays, for big corporations, to have extremely good employees in this department. The skills and needs of the decision-maker and the role of the decision within an organization, the importance of the risk analysis will depend on the objectives of the decision. A wise approach to decision-making might seek contributions from different angles. The importance placed on data analysis, management skills, organizational awareness, and custom and practice in the assessment of risk would be vital. In this field of course with any doubt Toyota is one of the finest players in the market, with a top notch decision-making process.

The worldwide automotive market is highly competitive. Toyota faces intense competition from automotive manufacturers in the markets in which it operates. Although the global economy continues to recover gradually, competition in the automotive industry has further intensified among difficult overall market conditions. In addition, competition is likely to further intensify due to continuing globalization in the worldwide automotive industry, possibly resulting in further industry reorganization. Factors affecting competition include product quality and features, safety, reliability, fuel economy, the amount of time required for innovation and development, pricing, customer service and financing. Increased competition may lead to lower vehicle unit sales, which may result in a further downward price pressure and adversely affect Toyota’s financial condition and results of operations. Toyota’s ability to adequately respond to the recent rapid changes in the automotive market and to maintain its competitiveness will be fundamental to its future success in existing and new markets and to maintain its market share. There can be no assurances that Toyota will be able to compete successfully in the future. That’s the risk connected with every business activity. Through this uncertainties Toyota has to deal with a top-notch management.

Each of the markets in which Toyota competes has been subject to considerable volatility in demand, so the risk is becoming even higher year after year affecting all business decisions.

Demand for vehicles depends on social, political and economic conditions in a given market and the introduction of new vehicles and technologies.

As Toyota’s revenues are derived from sales in markets worldwide, economic conditions in such markets are particularly important to Toyota. In Japan, the economy gradually recovered due to increasing personal consumption and last-minute demand encouraged by the increase of the consumption tax. In the United States, the economy has seen constant gradual retrieval mainly due to increasing personal consumption and the European economy has shown signs of recovery too. In the meantime, growth in emerging markets slowed down due to weakening currencies of emerging markets, increases in interest rates of emerging markets to protect the local currencies, and political instability in some nations. The shifts in demand for automobiles is continuing, and it is unclear how this situation will transition in the future.

Toyota’s future success depends on its ability to offer new innovative & competitively products that meet customer demand on a timely basis. Their corporate DNA is headed to continuous innovation and ensure that tomorrow’s Toyota is even better than today’s.

Toyota’s current management structure is based on the structure introduced in April 2011. In order to fulfill the Toyota Global Vision, Toyota reduced the Board of Directors and decision-making layers, changing the management process from the ground-up, facilitating rapid management decision-making.

In April 2013, Toyota made organizational changes with the goal of additional increasing the speed of decision making by clarifying responsibilities for operations and earnings. 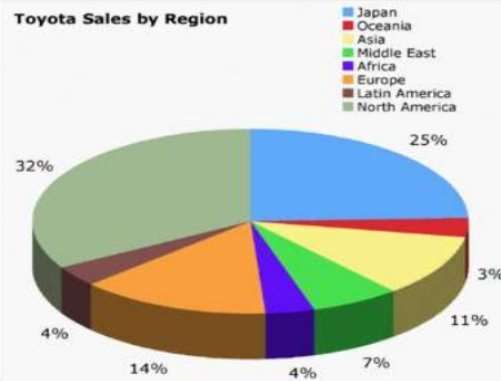 Meeting customer demand by introducing attractive new vehicles and reducing the amount of time required for product development are critical to automotive producers. In particular, it is critical to meet customer demand with respect to quality, safety and reliability. The timely introduction of new vehicle models, at competitive prices, meeting rapidly changing customer preferences and demand is more fundamental to Toyota’s success than ever, as the automotive market is rapidly transforming in light of the changing global economy.

Toyota has to be ready for every occasion to occur in this ever changing global economy. Toyota’s managers every year are taking under consideration every occasion to happen. Within a managerial decision-making context, a risk might be viewed as the chance of negative outcome for a decision which has a possible uncertainty element, usually on the downside.

In terms of finances, the carmaker boosted its profit forecast for the current fiscal year ending March, expecting net income to rise to 2.0 trillion yen ($16.97 billion, 14.7 billion euros). It also said revenue would come in at 26.5 trillion yen. Toyota Motor Corporation had revenues for the full year 2014 of 25.692tn. This was 16.44% above the prior year’s results.

Regarding the competition between Toyota, Volkswagen and ford, top players in the market, Toyota is average a positive trend. Moreover Toyota has the highest income since the year 2009. 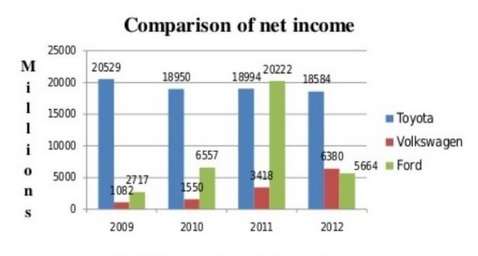 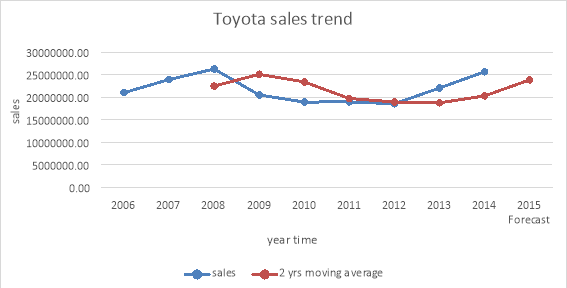 We could use instead different methods. The moving average is a simple method that doesn’t take in in consideration the weight or real value that a number has. In fact to overcome this issue we can adopt the “weighted moving average method” and the “exponential smoothing method”.

Using the “weighted moving average method” I take under considerations 3 years, which I consider the most important. The value of weights it is based on the percentage growth every year. 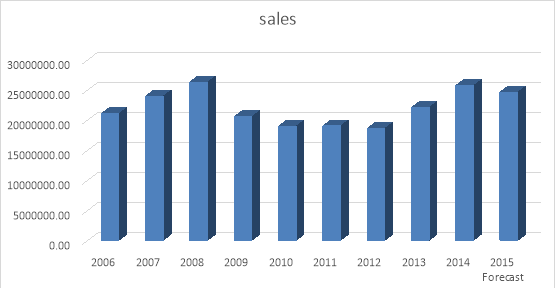 Here I take in consideration all of the years moving from 2008. Found out that the smoothing factor is pretty high, 0.99.

I think that the last one is the most appropriate method to see a realest forecast for the next year.

Of course the calculation has been made “ceteris paribus” so everything it is supposed to be the same next year, but as showed before this particular market is subject to constant changes. For this reason and other random errors the forecast could be higher or lower, but however we can obviously see a positive trend in Toyota’s business.

Thanks to the tireless efforts of all concerned, today Toyota’s group can take pride in the strengths of its management practices and culture. Even its president is convinced that they are now in a position to take a definitive step forward toward sustainable growth.

So is Toyota heading towards a sustainable growth? What is the engine for sustainable growth? Toyota has learned from experience that they can achieve sustainable growth only if they manage to create great cars that bring smiles and if they foster the human resources needed to make this a reality. At the same time, ever-better cars can be produced only through efforts made by employees on the front line. Individuals must take ownership of their work and place the utmost emphasis on local manufacturing, swift decision making, and immediate action. As it continues to grow however, tasks that were once routine may become increasingly difficult to perform. As I see it, Toyota’s current situation is particularly critical as we are now entering another expansion phase. This is a really important moment for Toyota. For this, because of the risks associated with the future Toyota should continue to seek perfection in his work of manufacturing, but especially in its management process where the decision-making process takes a fundamental part.

– Burns and Stalker, The management of innovation, Tovistock Publications, London, 1961