In carrying out this project, the Researcher will be able to provide the reader with the findings of the project works through the use of Class Material and Statistical Data collected which was conveyed using the real-time analysis and Irish Rails Annual Report. In doing so, this will establish “in short” the output response by way of the train’s arrival time. In addition, producing regression analysis graphs in terms of Null and Alternative Hypotheses being asked and relayed through the workings of Minitab (ANOVA – (one way factor) will determine the P-value by way of the design of the experiment (DoE)

The project will be focusing on the requirements set under the “Public Service Contract” between the National Transport Authority and Iarnród Éireann – Concerning Compensation for Public Service Obligations pursuant to Dublin Transport Authority Act 2008 (as amended by the Public Transport Regulation Act 2009) and EC Regulation 1370/2007, Schedule B – Performance Obligations of Iarnród Éireann to complete this project (Irish Rail 2017).

This report will provide key information to be documented and relayed throughout this project, such as:

In completion of this project the research hopes to reach an agreement based on the train time performance obligations against the researchers real-time data collected. This in turn has given rise to the question being asked by way of the Null and Alternative Hypotheses. In doing so it produces findings by way of graphs which focus on the residual analysis produced and P-value based on Irish rails 95% confidence requirement.

Thereafter, determining the level of compliance being corresponded by Irish rail against real-time analysis output response carried out over a two week period. Results were achieved through the use of Irish Rail real time software application.

Finally, the researcher himself has an added interest in the findings as he has spent the last 5 years using the service from Dublin to Galway and Galway to Dublin collectively and is fully aware of post -arrival time delays and their add -on effects that he has endured on arriving at his final destination and the knock on effects interlinked.

In addition the DART service operates between Greystones and Howth/Malahide. It also runs a commuter service in the Dublin area between Gorey, Drogheda, (Irish Rail 2017)

Punctuality is set by the National Transport Authority (NTA) for all routes which regulates Irish Rails performance rates. Punctuality is defined as on time or within 10 minutes of arrival times. Delays outside of Iarnród Éireann’s control are trucks hitting bridges or extreme weather conditions such as snow or fog (Irish Rail 2017). The NTA performance reports under the Public Service Obligation contract is measured against Iarnród Éireann punctuality records. This excludes delays as stated above and figures are independently verified by the NTA. Reliability simple put is whether the train operates or not.

In the undertaking of this project the design of the experiments (DoE) objective was to discover if the punctuality (Train Delay) of real time analysis meets the requirements set and if the tasks could be repeated would we get the same results or could the process be improved to achieve better results. In carrying out this experiment the topic choice untaken was to be of significant value to achieve the right information which in turn helps to design the experiment in the right manner otherwise this information could be mixed up with something else such as an observational study (Reilly 2017, pg 109). To differentiate from the above, a design of experiments was sets out to identify causes that may enable us to change the behaviour pattern and help improve the process.

In achieving my final results this experiment considered the effect of a factor (Time of Day) on an output response (Different times of the Day). Additionally this experiment placed emphasis on a number of different train times (factor levels) which were randomly selected beforehand consisting of Peak and None peak times during the week.

To get a true value one can only assume that what is being relayed by the company is accurate. This should not be taken as being accurate until otherwise proven but one can only assume that the null hypothesis is true. In order to get a true reflection in statistics the theory of testing is called the null hypothesis (H0). ‘Hypothesis’ is another word for ‘theory’, and it is ‘null’ because at the outset it is neither proven nor disproven (Reilly 2017, pg. 68).

In the task being carried out the objective is to prove or disprove that Irish rails punctuality clams mean is at 95% and to show how close or far from the 95% it is. Then you have to ask the question. ‘What is the probability of the data, assuming that the null hypothesis is true, this probability is called the p-value (Reilly 2017, pg. 68).Then using the standard Î± = 0.05 cut-off, the null hypothesis is rejected when p < .05 and not rejected when p > .05 also known as type one and two errors.

The Null Hypothesis being asked.

The null hypothesis (H0) Different times of the day does not affect the time of day. This means that all the factor levels according to the null hypothesis, that random variation is only present.

Single-Factor Experiments and ANOVA by software

For the purpose of this project, A single-factor experiment was to be carried out, which considered the effect of one factor on a response as stated prior. Furthermore, other factors that could affect the arrival time, such as accidents on bridges and extreme weather conditions, where kept constant during this experiment by applying the principles of experiment design.

Principles of Experimental Design in this case

To get a true measurement for each response three test was carried out for each factor level over two weeks. This then allows you to see how much random variationoccurs in the response even when the factor level remains the same, otherwise known as the “error variance” (Reilly 2017, pg 109). It must be noted that The term ‘error’ does not convey as a mistake in this instance but simply takes into account impacts that could affect the overall result such as environmental impacts along with other underling facts for example driver error, trains not leaving stations on time, other trains impacts and peak travel times. Furthermore, it also must be noted that the “learning effect” should have no effect on the over final results in this case.

In order to achieve a true reflection of the project in hand, the researcher projects logistics required the experiment to be performed in a random run and not that of fixed method. In order to achieve a fare random selection the researcher randomly picked days of the week Monday to Friday and every first to third day or second to fourth day simultaneously. This in turn allowed each train time on the track equal status over the project phase and not allowing any factor to be more prominent over another during the test regardless of the time permitted by the company Principles of Experimental Design in this case. The reason for this is that there may be some progressive change as stated prior addressing any concerns.

Blocking was taken into account in this case but after the fact and not prior to the random section. This only became apparent to the researcher as the different days of the week could have an effect on the output response, as can be seen in the data below in some small part in this case. To get a true reflection of this the researcher would repeat the test again in a different blocking manner to see if the start of the week output response is greater than the end of the week over a longer period of time as the number of people travelling declines as the week progresses. This is one element of the test if repeated the researcher would look at in more detail.

One-way ANOVA: Different time of the day versus factor Levels 4 in 1 overview 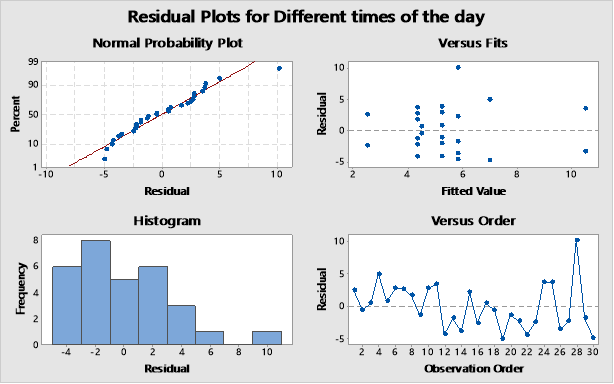 Null hypothesis All means are equal

Alternative hypothesis At least one mean is different

Equal variances were assumed for the analysis.

In carrying out the Regression Analysis it is important to understand that the first hypothesis in regression formula is: (H0: Î² = 0) or more importantly it accounts for the P-Value (Levels) in this case. In addition the null hypothesis states that X is not a useful predictor of Y, or graphically Meaning the H0: Î² = 0 regression line is horizontal. Subsequently, If the null hypothesis is accepted, it may then indicate that there might be no predictive relationship at all between X and Y, and the analysis is over. But if this null hypothesis is rejected, it indicates that there is a predictive relationship between X and Y, and so it is useful to construct a regression equation for predicting values of Y. The second hypothesis is: H0: Î± = 0 is not accounted for in this case as there is no constant present in results as stated below (Reilly 2017, pg. 97).

Alternatively, If the null hypothesis is accepted, this means that the regression line may pass through the origin or that Y is directly proportional to X, so that any change in X would be matched by an identical percentage change in Y (Reilly 2017, pg. 98). Minitab by software output results as stated bellow.

The p-value for levels is 0.621, which is less than 5%, so we reject the hypothesis that the regression line is horizontal in this case.

Residuals vs Fits for Different time of the day 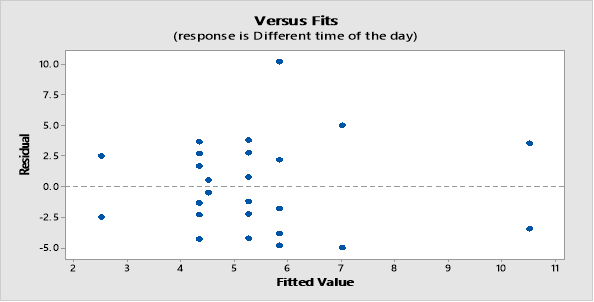 In this case you can notice that on-peak times have consistently lower scores than the other train times. You also notice that the x-axis marks are unequally spaced. The length between the ticks is proportional to the number of scores (observations) for each arrival time

Normal plot of Residuals for Different time of the day 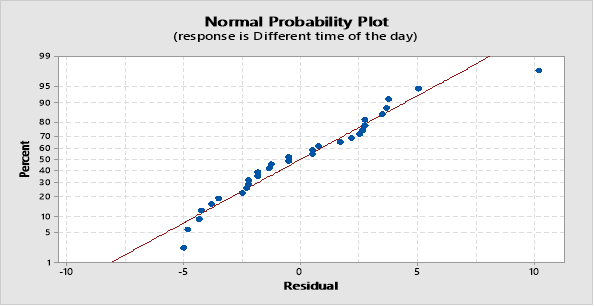 In this case the plot above indicates that the arrival times are reasonably normal. There is some scatter with one outlier; however the points are roughly speaking linear in this instance.

Residual Histogram for Different time of the day 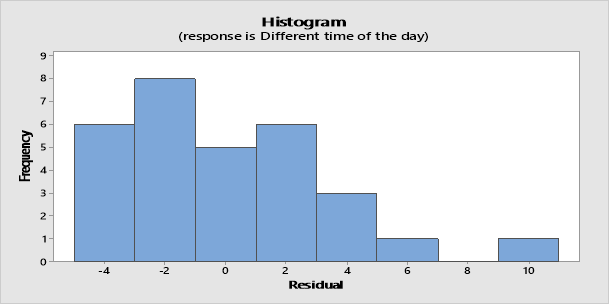 Residuals vs Order for Different time of the day

In this case the time series plot shows a spike, this shows where there was a late arrival outside the expected arrival time before returning to expected level again. This correlates with outlier in the additional data stated above.