To find the binomial probabilities, this can be used as follows:

R programming will be used for calculating probabilities associated with the binomial, Poisson, and normal distributions. Using R code, it will enable me to test the input and model the output in terms of graph. The system requirement for R is to be provided an operating system platform to be able to perform any calculation.

Whether it is for theoretical or practical purposes, Using Central Limit Theorem is more convenient to approximate the binomial probabilities.

The CLT states that, for situations where n is large,

The approximation results as follows:

Correction for continuity adjustment will be used in order for a continuous distribution to approximate a discrete. Recall that a random variable can take all real values within a range or interval while a discrete random variable can take on only specified values. Thus, using the normal distribution to approximate the binomial, more precise approximations of the probabilities are obtained.

We can verify the calculation using R,

Below an alternate R code is used to plot and illustrate the normal approximation to binomial. 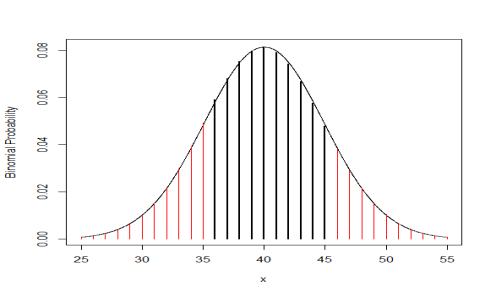 The probability of a person will develop an infection even after taking a vaccine that was supposed to prevent the infection is 0.03. In a simple random sample of 200 people in a community who get vaccinated, what is the probability that six or fewer person will be infected?

Let X be the random variable of the number of people being infected. X follows a binomial probability distribution with n=200 and p= 0.03. The probability of having six or less people getting infected is

The probability is 0.6063. Calculation can be verified using R as

In order to avoid such tedious calculation by hand, Poisson distribution or a normal distribution can be used to approximate the binomial probability.

Poisson approximation to the binomial distribution

The results turns out to be similar as the one that has been obtained using the binomial distribution.

Calculation can be verified using R,

It can be clearly seen that the Poisson approximation is very close to the exact probability.

The probability that there will be six or fewer cases of these incidences:

As it was mentioned earlier, correction for continuity adjustment is needed. So, the above expression become

Using R, the probability which is 0.5821 can be obtained:

The normal approximation to the Poisson distribution

When λ is large (say λ>15), the normal distribution can be used as an approximation where

Here also a continuity correction is needed, since a continuous distribution is used to approximate a discrete one.

A radioactive disintegration gives counts that follow a Poisson distribution with a mean count of 25 per second. Find probability that in a one-second interval the count is between 23 and 27 inclusive.

Let X be the radioactive count in one-second interval, X~Po(25)

Using normal distribution as an approximation can be useful, however if these conditions are not met then the approximation may not be that good in estimating the probabilities.