STATISTICAL TECHNIQUES FOR BEHAVIORAL SCIENCE I

FACULTY OF ARTS AND SOCIAL SCIENCE

According to Gilbert and Weaver (2010), human bodies require not only basic needs of air, water and food to function well but also sufficient sleep as it is important for learning, memory consolidation, critical thinking and decision making. For optimal functioning in academic, sleep is essential.

Sleep deprivation is now widely recognized as one of the significant public health issues not only among students but people of all ages and groups. Some shows excessive sleepiness and this is then related to not the quantity of sleep obtained but the quality of sleep. (Gilbert & Weaver, 2010)

Both sleep deprivation and poor sleep quality are prominent among students because often they have irregular sleep patterns due to the workloads from their study schedule and also clubs’ activities. This resulted in them having short sleep lengths in the weekdays and also later wake-up time on weekends. (Gilbert & Weaver, 2010)

It is recognized by university psychologists that student academic performance is being negatively affected by poor sleep quality and/or sleep deprivation. Though depression is also one of the factor that affects academic performances of students, sleep quality may even be more significant of a factor than depression in affecting students’ studies. (Gilbert & Weaver, 2010)

It is found that impact of sleepiness on mood is large as higher negative mood states are being reported by students who fell asleep during class.

Will sleeping hours affect the academic performance of students of UTAR Perak Campus?

Researchers want to find out how different amount of sleeping hours affect the studies of students.

What are the factors that affect the quantity of students’ sleeping hours ?

Researchers are interested in finding factors which will affect both the quality and quantity of students’ sleeping hours which will then leads to affecting the students’ studies.

Will a student’s sleeping habit being influenced by friends and family?

Researchers are keen to know to the extent of how friends and family will affect a student’s sleeping habit.

How many hours of sleep do the male and female students need per day ?

Researchers want to study about the amount of sufficient sleeping hours required by female and male students.

What are the differences in CGPA scores of both male and female students according to the amount of sleeping hours they have ?

The researchers are keen to study the differences in CGPA score obtained by both genders of students according to the amount of sleeping hours they have.

Sleep is very important to a human being’s health. The consequences of sleep manifest in both health and performance. The relationships between sleep and performance have been studied in many different fields including human science, medicine, psychology, education, and business and etc. Sleep-related variables for instance sleep deficiency, sleep quality, sleep habits have been shown to influence the performance of students (Lack, 1986; Mulgrew et al., 2007; National Sleep Foundation, 2008; Pilcher & Huffcutt, 1996; Rosekind et al., 2010). According to Weitzman et al. (1981) , Delayed Sleep Phase Syndrome (DSPS) was defined into three big categories which are long sleep latency on weekdays (normally fall asleep between 2 a.m. to 6 a.m.), normal sleep length on weekends (usually sleep late and wake up late on weekends); and difficulty in staying asleep. These sleep problem is common and is present in students around the world.

Results indicates that in the U.S., 11.5% of undergraduate students were found to have DSPS (Brown, Soper, & Buboltz, 2001). Not only that , Australian studies found the prevalence of DSPS in students (17%) to be higher than in adults (6-7%) (Lack, 1986; Lack, Miller, & Turner, 1988). Studies related to DSPS have also been conducted in other countries such as Japan, Norway, and Taiwan (Hazama, Inoue, Kojima, Ueta, & Nakagome, 2008; Schrader, Bovim, & Sand, 1993; Yang, Wu, Hsieh, Liu, & Lu, 2003). Furthermore, In Lack’s (1986) study, the DSPS group experienced sleepiness on weekdays more often rather than the non-DSPS group. In addition, , it was found that members of the DSPS group performed at a lower level academically when compared with the non-DSPS group when course grades were examined . In a more recent study, Trockel et al. (2000) found that first-year college students with lower GPAs reported later bedtimes on weekdays and weekends and later wake-up times on weekdays and weekends.

On the other hand, the relationship between sleep and academic performance was reviewed in other studies . Approximately 103 studies related to sleep loss, learning capacity, and academic performance; samples were carried out among students in different university by Curcio, Ferrara, and Gennaro (2006). According to Curcio, Ferrara, and Gennaro (2006), sleep loss was negatively correlated with academic performance. Results indicates that sleep-deprived students performed poorly on learning capacity skills for instance attention, memory, and problem-solving tasks, and that the lack of sleep therefore indirectly affected their academic performance. Sleep deprivation is a term meaning loss of sleep Drummond and McKenna (2009) . Moreover, sleep loss resulted in daytime sleepiness that was also correlated with poor academic performance studies showed a significant relationship between lower GPA and lack of sleep among college students. The Multiple Sleep Latency Test was an instrument used to evaluate daytime sleepiness, which has been used by previous researchers (Carskadon, Harvey, & Dement, 1981; Fallone, Acebo, Arnedt, Seifer, & Carskadon, 2001; Randazzo, Muehlbach, Schweitzer, & Walsh, 1998).

On the other hand, another study was conducted to determine the various sleep patterns in medical students appearing in various ongoing professional at Shifa College of College of Medicine, Islamabed and to find out relationship between number of hours of sleep before an examination with academic performance in relevant exam. Majority of the students had reduced sleep in exam days and its reason was found to be studying late at night before paper and academic performance. There have been various reasons for decreased sleep in university and college students including watching TV and using the internet. A study done in a Pakistani medical university indicated that 58.9 per cent of the university and college students the most common cause of sleep deprivation was watching television and listening to music affects the students slept less than 8 hours a day . In addition, stress, in university and college students, is also a very essential contributing factor in inability to sleep at night. Consumption of caffeine , pain killers, substance abuse and smoking at night to keep them awake is also another trend seen among students. This greatly contributes to sleeplessness at night among students and affects their academic performances adversely. (Oshodi OY, Aina OF, Onajole AT, Omvik S, Pallesen S, Bjorvatn B, Thayer J, Nordhus H. Qureshi AU, Ali AS, Hafeez A, Ahmed TM ). Moreover, the study showed that students who achieved good grade (A, B) were those who slept for more than 7 hours but those who majority failed in exam, were also mostly those who slept less.

However, a similar study done in USA showed that students who had struggling grades (C’s D’s / F’s) were those who slept significantly less than those who scored A and B grades ( Wolfson AR, Carskadon MA). According to the study, student slept an average of only 4.74 hours before the exam and females slept less (4.71+1.82 hours) as compared to males (4.77+3.27 hours ). This was similar to a cross sectional study done in Sao Paulo, which showed that boys slept about 390 minutes. However, their academic performance was not affected by the disturbance in the sleep cycle.

Furthermore, another research was done with 103 samples of undergraduate classes of University of Minnesota.This study separate unhealthy sleep habits into two categories which are quality and quantity of sleep. In this study, the survey asked questions related to their sleep habits in term of quality and quantity of sleep which separately measured in order to break up the term of “unhealthy sleep habits” and analysed this topic by using a different method compare to past research. In this research, the researchers found that sleep quantity and academic performance are related. This research shown that have the relation between part of sleep deprivation measures for the average week and the average amount of sleep obtained in a night and GPA. This result helps the college student by practical applications. From this research, the researchers found that amount of sleep and academic success are positively correlated, although cannot conclude that sleep better, score better in exam.

Participants of the Study

There are 50 participants in this study. They are degree students from University Tunku Abdul Rahman (Kampar) who are from faculty of art & social science (FAS), faculty of business and finance (FBF), faculty of information communication and technology (FICT), institute of Chinese studies (ICS) and faculty of science (FSC). Their age range is from 20-24. Besides, there are 5 male and 5 female from each faculty.

Our questionnaire consist of 15 closed-ended questions and each question involved different level of measurement such as nominal, ordinal, interval and ration scale.Our demographic details are gender, age, courses of studies and CGPA comprised in the questionnaire.

‘Sleep measures’ consists measurement of Total Sleep Time (TST), Sleep Onset Latency (SOL), Sleep Efficiency (SE) and Wake After Sleep Onset (WASO). It is determined by the Cole-Kripke (1992). Total Sleep Time (TST), which is duration of time actigraphically-determined as “sleep” within a 24-hour period, including daytime and nighttime periods of sleep. Sleep Onset Latency (SOL), which is time used between getting into bed and falling asleep, calculated as the time used from the start of actigraphically-determined “inactivity” to the first minute scored as sleep. We only refer TST and SOL among the four measurements in our questionnaire (question 2 and question3).

To measure the sleep quality of students, we decided to use the Adult Sleep–Wake Scale (ADSWS). It is a self-report pencil-and-paper measure of sleep quality consisting of ¬ve behavioral dimensions, which are Going to Bed, Falling Asleep, Maintaining Sleep, Reinitiating Sleep, and Returning to Wakefulness. The questionnaire consists of time taken to fall asleep at night (range from <10 minutes to >1 hour), the amount of sleeping hours required in order to function well on the following day (range from <5 hours to 8 hours), the factors affect the quality or quantity of student’s sleeping hours and the perception of academic performance influenced by insufficient sleep. 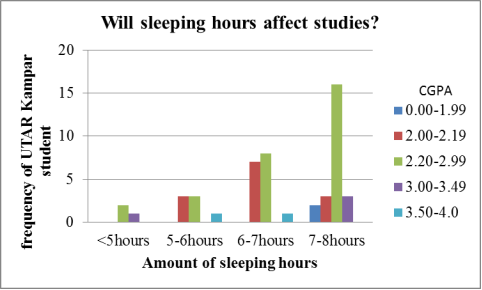 Figure 1 shows the CGPA scores obtained by students of UTAR Kampar campus according to the amount of sleeping hours they have. Students are likely to obtained highest CGPA score range of 3.50 to 4.0 when they obtained seven to eight hours of sleep per day. 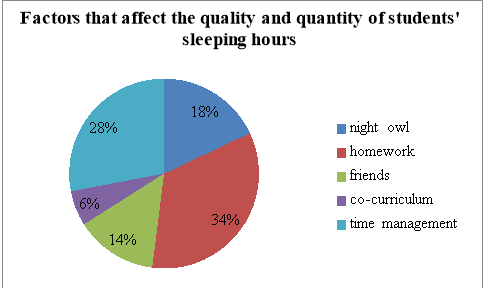 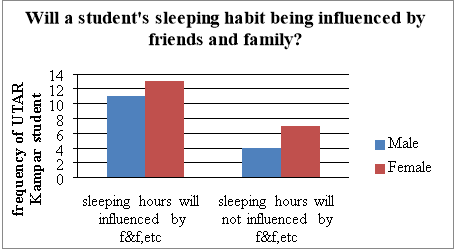 Figure 3.Will a student’s sleeping habit being influenced by friends and family. 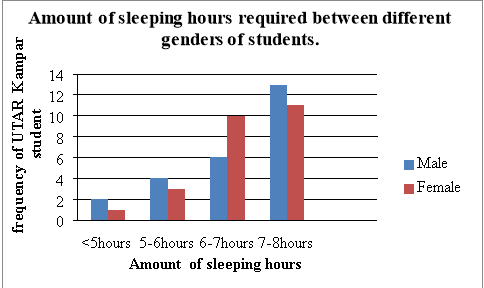 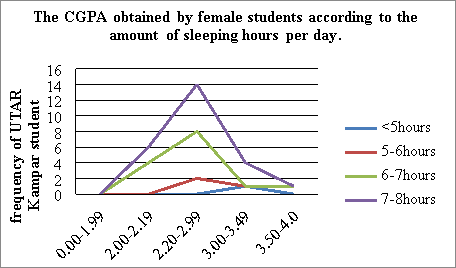 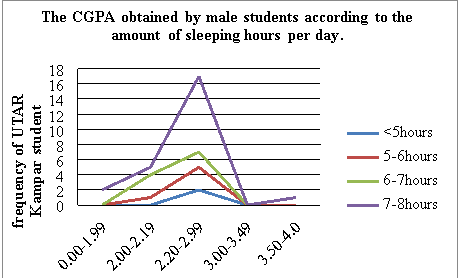 Figure 5 shows the CGPA score obtained by both male and female students according to the amount of sleeping hours per day.