Forming a 99% confidence interval for my data set:

Our confidence interval is:

We can therefore say with 99% confidence that the mean number of tattoos per student for the population of all students at NTU is between 0.54 and 9.74 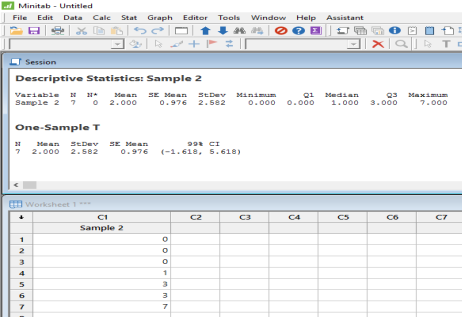 Looking for evidence at the 97% confidence level of a difference between the samples:

I am going to use a two-sample T test to analyse this data as there are two small samples formed from data that is not paired.

We can say with 97% confidence that there is no difference between the two samples. 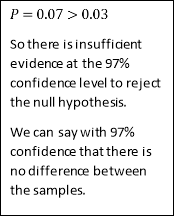 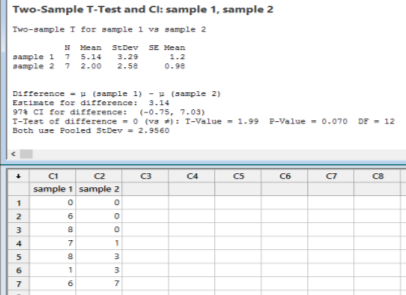 We can therefore say with 95% confidence that the inhaler did improve the lung function of the people who used it.

I am going to use a one tailed hypothesis test. This is because it does not matter if the inhaler improves lung function in over 80% of cases, only if it does not reach this claim. I will take 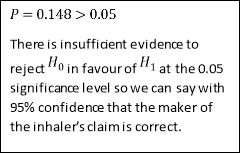 The lung function recovery time reduced in four of the seven trials so 4 events out of 7 trials, leading to

[It] consists in mixing eight cups of tea, four in one way and four in the other, and presenting them to the subject for judgement in a random order. The subject has been told in advance [â€¦] that she will be asked to taste eight cups, that these shall be four of each kind – Fisher, 1935.

According to Imai (2016), Fisher introduces the idea of a null hypothesis, which in this case, is the idea that the woman is guessing and cannot actually distinguish between the cups. Fisher then used the lady’s answers to work out the likelihood of her getting this result whilst guessing. From this, he found that there were 70 ways to choose 4 cups out of 8 and that from these, there was 1 way of getting none and four correct, 16 ways of getting one and three correct and 36 ways of getting two correct, as shown by Inglis-Arkell (2015).

Although pioneering, however, the test itself was not powerful. As explained by Stark (2010), the small sample size caused the probability of her guessing randomly only coming out less than 0.05 (the condition required to reject the null hypothesis) if she got a perfect score. This is because guessing all four correctly carried a probability of

whereas guessing three out of four correctly carried a probability of

. This issue would have been reduced with a much bigger sample size.

For another mathematical example, we will look at the following question:

Following the logic displayed by Stark (2010) for the lady tasting tea problem, there would be only 1 way of choosing all five correctly. Using the formula

ways of choosing five cups of tea out of the ten. This means that the probability of getting all five correct is

As stated by Inglis-Arkell (2015), the number of cups that the lady guessed correctly is unknown. Despite this, the lady tasting tea experiment is still extremely influential and led to Ronald Fisher being praised for his book The Design of Experiments due to how clearly he explained why randomisation is important and how he decided what would be acceptable evidence to accept or reject a statement.

1. I am aware of the University’s rules on plagiarism and collusion and I understand that, if I am found to have broken these rules, it will be treated as Academic Misconduct and dealt with accordingly. I understand that if I lend this piece of work to another student and they copy all or part of it, either with or without my knowledge or permission, I shall be guilty of collusion.

2. In submitting this work I confirm that I am aware of, and am abiding by, the University’s expectations for proof-reading.

4. I understand that it is entirely my responsibility to ensure that I hand in my full and complete coursework and that any missing pages handed in after the deadline will be disregarded.

5. I understand that the above rules apply even in the eventuality of computer or other information technology failures.