Racism can be traced back to essentially the beginning of civilization and has continually remained a prevalent issue amongst society. Despite the numerous endeavors and reforms that have transpired throughout history in hopes of eradicating racism, the plight of bigotry and prejudice is still occurring today. This ideology has steadily evolved and developed in various distinct forms, which are distinguishable from the past. Racism can be said to be one of the most harmful forms of cruelty because it is directed at something one has never asked for and more importantly, something which cannot be changed. Daily discrimination is still profusely prevalent amongst ethnic minorities, although more masked today than in the past. Many individuals today do not openly come out spewing insensitive racial remarks, of course, as this is looked down upon and seen as unethical. However, the underlying belief that an individual is inferior solely because of their race can still remain repressed in one’s mind. The perceptions and beliefs one may assume of another, although perhaps left unsaid, plays a prominent role in how the society we live in today operates. The effect of the deep-rooted prejudice from the past is exhibited in the perceptions and actions of individuals today.

The study is aimed to assess the bias one may regarding people of color along with the disparities among experiences throughout life. It is proposed in order to gather a deeper, in-depth understanding of the reason individuals behave a certain way and to examine the reasoning behind a different outlook on the prevalence of racism. Research on this topic is not only extremely notable but, important to discuss in order to determine why our society has progressed in eliminating racism but has not come close to completely dissolving it. The Critical Race Theory provides a critical analysis of society and culture relating to race, law, and power. This theory examined how victims of racism are influenced by the perceptions of race and the steps which were taken to prevent prejudice. It was concluded that every person’s identity is shaped by race, it makes up who one is and was once a great dictator on the path a person’s life was set to go. The study works with the CRT Model in order to investigate if the results are still the same forty years later and to comprehend a deeper understanding. To delve into specifics of this research, seventy-six individuals ranging from early teenagers to fifty-year-old adults took a fifteen question close-ended questionnaire as a sociological method. A broad age range allowed for a wide area of opinion, with less chance of bias or error. The participants were asked a variety of questions, beginning with gender and ethnicity. The response to ethnicity allowed for a proper analysis on whether a person’s race had an impact on their outlook on certain situations and responses. The study conducted allowed the individual to write in their specific group, however, the research will be solely based on people of color and white individuals. The subjects were selected from family, friends, and participants from Reddit. A large sample size allows a less chance of bias being displayed. Having individuals from different parts of the world participate in the questionnaire similarily allowed for less bias, as opposed each person living in the same area. This study provides a deeper understanding of the vast contrasts of beliefs people of color possess opposed to others.

The results of the study were remarkably surprising, despite some answers remaining expected.

Out of the cumulative responses, around half of percent of the participants were white while the other half was a person of color [with one participant being a mixed race]. When the participants were asked if they believed police are more likely to apprehend a person of color as opposed to a white person, eighty-two percent agreed it was true. In today’s world, there has increasingly become a clearer divide between people of color and the police. People of color tend to believe that they are reprehended more harshly because of the color of the skin, something which can not be changed. There have been numerous instances of a cop using his power in a corrupt way, for instance, shooting a person of color who was simply not doing anything wrong. It has become common knowledge in today’s society that people of color, more specifically black individuals, fear the police more than a white person would. The ideology that white individuals are allowed to get away with more stems the discussion of declaring that white people are more privileged. Thirty percent of the participants answered yes to believing that their race has directly caused a problem in their life, which is summed up to twenty-two of the participants. Seeing how half the participants were a person of color [thirty-eight people], it was analyzed that just fifteen believed that their race caused them a problem. Forty-eight percent of people believed that most people in the United States are too quick to judge others based on their racial background, while another forty-eight percent believed that only some people were too quick to judge. Only one participant responded that very few people judge others based on their background, which in hindsight is quite a minuscule amount. The results for this question attested to the extremely general belief that racism still exists in today’s world. The participants result for the question “Have you ever thought of someone differently purely because of their race?” was remarkably shocking. Forty-five people confessed to the reflection of an individual changing solely because of the way that one’s race. There is underlying prejudice in today ’s world, although perhaps it may be unspoken and not directly cause harm to the individual. This study concluded that the perception people may have of another can be caused by something as trivial as a race. The image above demonstrates the remaining questions the participants answered along with the percentage of results. The concept of race was once used in order to form a dynamic divide between a race which is superior and a race which is inferior, and the effects of it can still be shown today. 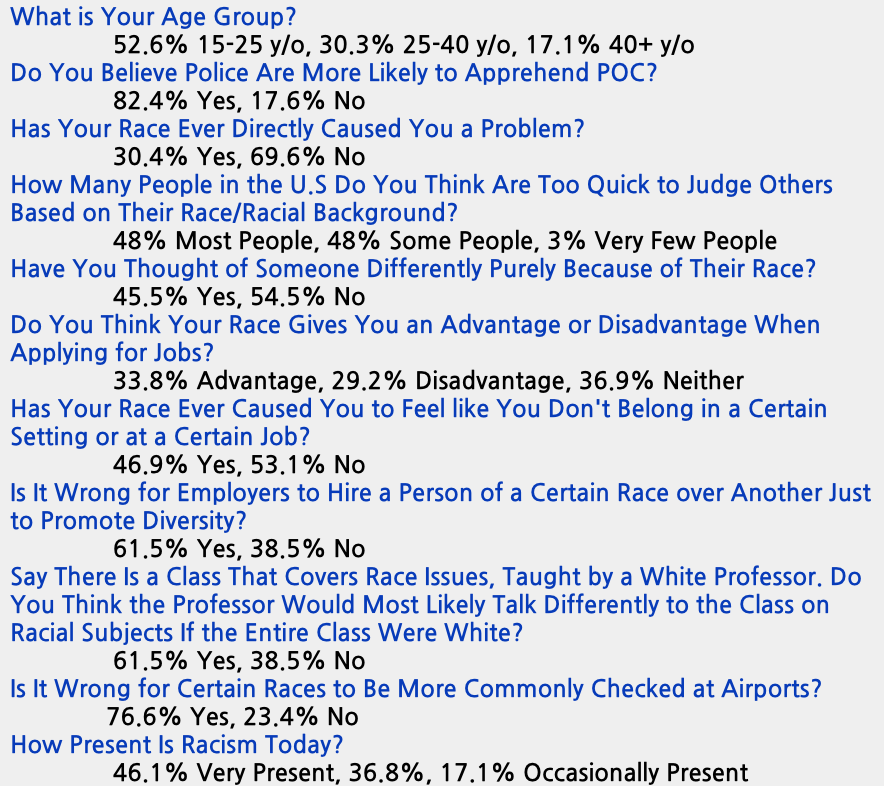 Throughout the study conducted, there were several notable responses within the questionnaire which were deeper analyzed. A particularly noteworthy response came from the question, “How present is racism today?”.  It is evident that prejudice and discrimination are not what it once was. The resentment and alienation of minorities are not as common as it was throughout history. Individuals have grown and there are fewer cases of one truly loathing another because of their race. There are no longer laws which enforce and support racial segregation. However, racism has merely evolved into different forms. The close-ended question within the study which the participant answered allowed for the further understanding of what different races interpreted as intolerance. Out of seventy-six test participants: thirty-five individuals believed that racism is very much present today, twenty-eight believed it was merely somewhat present, and thirteen believed it was not present at all. The three pi-graphs below illustrates the difference between answers among white people and people of color. It is particularly interesting that individuals who believed that racism is not an issue in today’s society whatsoever were eighty percent white. The circumstance rather strongly could be that white individuals truly do believe that racism is no longer a prominent figure in today’s society because they themselves are not a minority, which leads them to never experiencing racism and turning a blind eye. 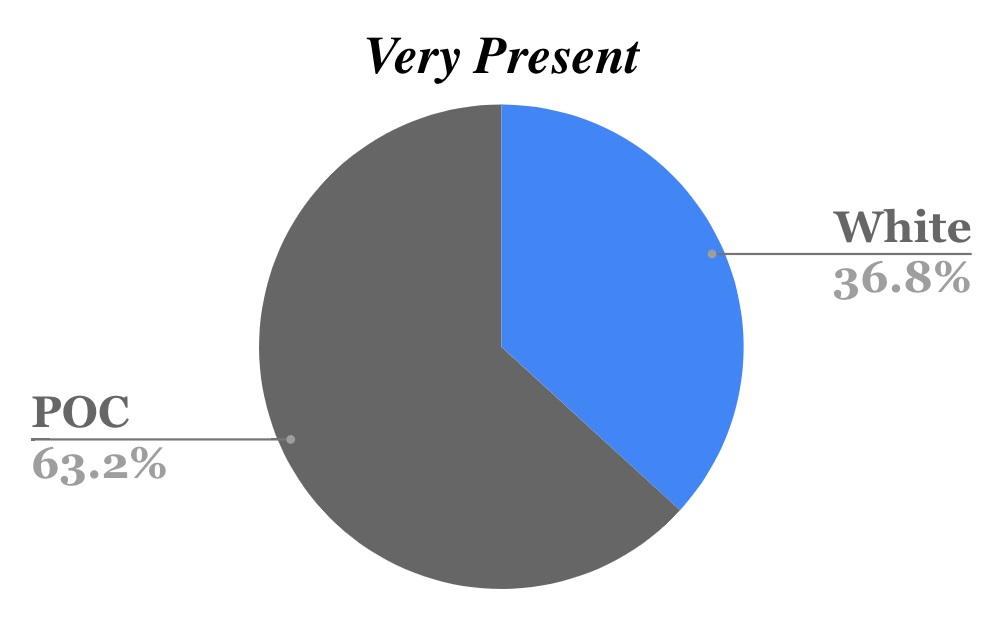 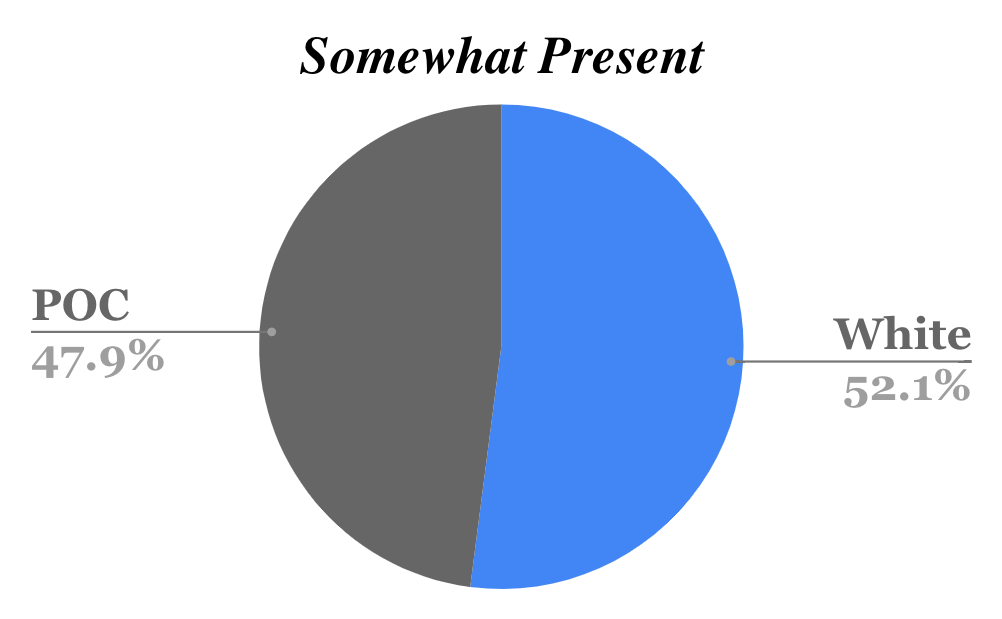 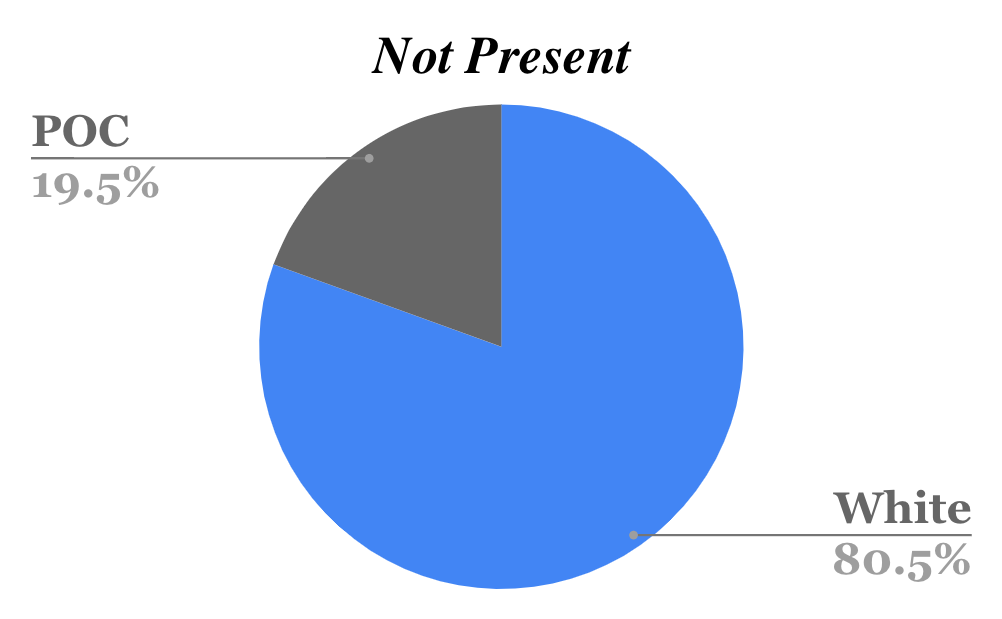 Published in 1997, The Journal of Criminal Justice published “The Impact of Race on Perceptions”. Five authors [Martha Hurley, Francis Cullen, Liqun Cao, Sandra Browning, and Renee Kopache] coordinated in order to accurately explore whether individuals who are white compared to black differ in their “perceptions of racial injustice within the criminal justice system”. This journal related to the question asked during the study if people of color were more likely to be apprehended than others. The results of this journal accurately displayed that it is, in fact, a very true statement that black individuals are treated more poorly. The results of the data showed that Black citizens are more likely to be stopped by the police, given a ticket, and jailed. Even when there were separate controls introduced to the study the results still heavily stayed the same. There is still a vast divide concerning minorities, despite the significant changes which were made in the past, and it is greatly shown within the criminal justice system. Injustice was also more likely to be shown in less financially stable African Americans. The table shown below by Liqun Cao determined that in essentially all situations, African Americans were more likely to be penalized. Overall, white people are immensely less likely to see the legal system as corrupted or unjust. According to Allen Liska, there is evidence that race is considerably more influential than social class in American arrest rates. What was also found is that regardless of race, members of the “surplus population are significantly more likely than members of other classes to perceive criminal injustice”. Similarly, The American Sociological Review, a peer-reviewed journal, published “Race, Ethnicity, and Youth Perceptions of Criminal Injustice” in 2005. John Hagan, Carla Shedd, and Monique R. Payne examined six conflict hypotheses with data from more than eight thousand Chicago public school students. These journalists used survey data in order to explore how perceptions of criminal injustice vary amongst different races. The conclusion was the same nearly a decade later. White people recorded significant more confidence and trust in the justice system. Not only are black individuals more prone to see the criminal system as unjust, but they are more prone to receive harsher detention. John Hagan recently revised his benchmark scale which was formed in the mid-1970s. After analyzing the research of the students in Chicago public schools, Hagan concluded that criminal injustice for both Latino and black individuals are larger in schools which are mixed-race. It is exceedingly shown that although racism may have been reduced in its typical sense, it still plays a prominent role in daily life for a large number of people of color.

Within social science, race is commonly recognized as a social construct. This ideology unfolded from prejudice and people severely longing to be superior to another human being. The social construction of race has been consistently developing since the beginning of time and despite society’s attempts to end it, its effects nevertheless still linger today. Discrimination and bias are shown in countless aspects of today’s society, such as amidst police officers. The field research study both described and analyzed the effects an individual’s race could play on their overall sense of life as well as the underlying prejudice which one may possess. With more than forty-five percent of participants in the study stating a  perception of another individual was heavily influenced by their racial background, it is safe to say that racial bias is still vastly integrated within the world. The profound resentment of minorities that occurred in the past is still represented in the judgments and actions of people today.