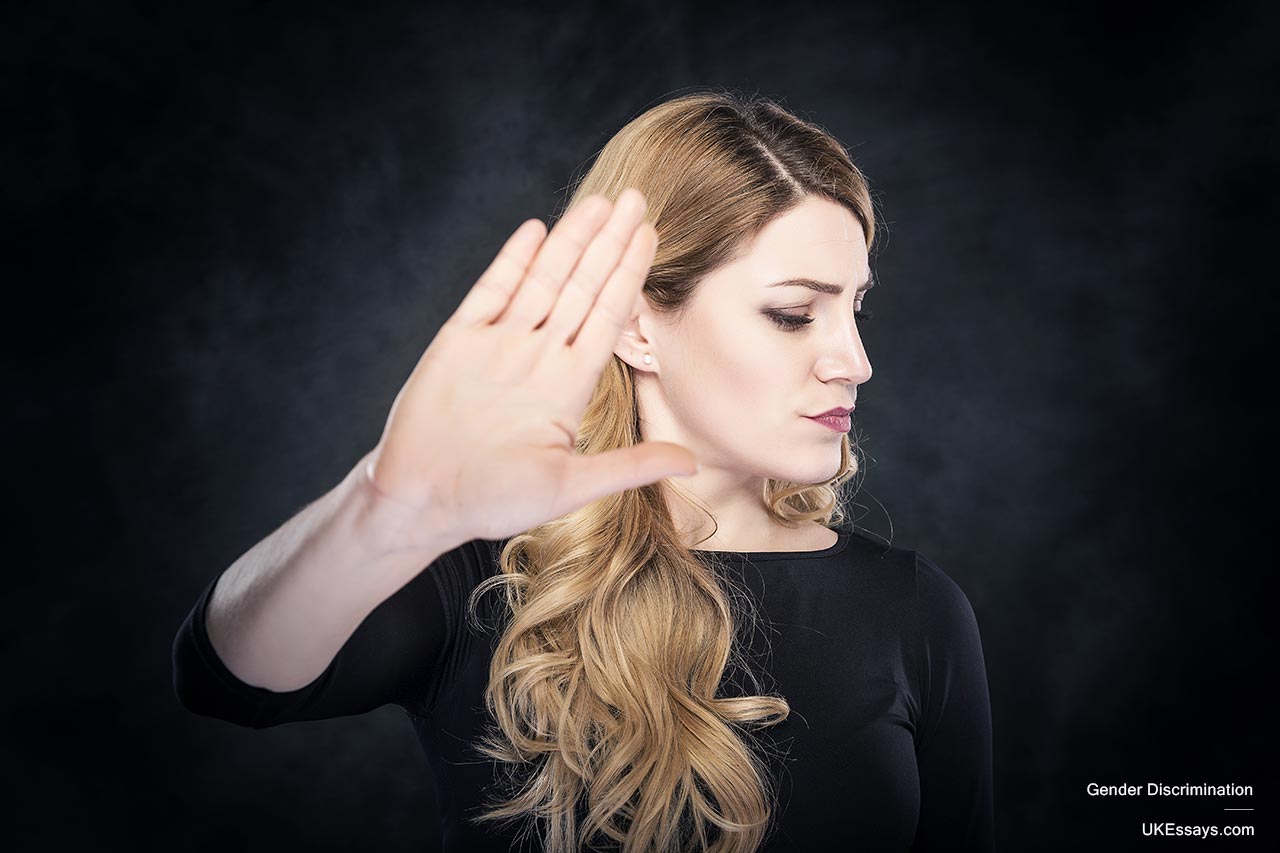 Gender inequality, or in other words, gender discrimination refers to unfair rights between male and female based on different gender roles which leads to unequal treatment in life. The term gender inequality has been widely known in human history but not until the beginning the 20th century has the transformation of gender relations become “one of the most rapid, profound social changes” (Wright & Rogers 2009).

And at the same time, the position of men and women were generally set. The growth of this situation has been obviously seen. According to a survey in America, female’s salary at work is 75% as low as male’s. Coming back to last century, at work, when men were paid 1 dollar, the amount that women received was just 58 cents, in accordance with the law in 1963 (Tran 2012) . And in Vietnam, gender inequality is shown in the difference between two genders in the number of babies. Statistics of Ministry of Planning & Investment in 2010 reported that there were 110.6 new-born boys out of 100 new-born girls which was much higher than in the past.

However, as a matter of fact, gender discrimination has made a big argument in society about whether the equality among genders should be encouraged or not. Regarding to this problem, American people seem to appreciate the position of women, meanwhile, the Chinese tend to think of higher power of men in life (Chang n.d.)

Thus, this paper, with the purpose of reporting the current states of gender inequality, its impacts as well as the solutions to improve this trend, will give readers another look at this controversial problem.

What is gender inequality?

Gender inequality is a social problem which causes unfair treatment in society between different genders. These dissimilarities are distinguished from biological factors, especially from differing reproductive roles in life (Reeves & Baden 2000). This misperception comes originally from the wrong understanding about the position of each gender in life.

Nowadays, the paradox that makes women suffer adversities and put women into unpleasant situation is seen in every angle of life. However, the method of gender discrimination in one place differs from that in others. For example, in workplace gender inequality accelerates when entering the job racing, not only the dissimilar salary, inequality at work is demonstrated through the differences between genders and the amount of money paid (Hsu 2012). In the aspect of education, in the past, men are prone to have more chances to go to school. Young women seemed to have fewer opportunities for higher education than young men (Dang 2008, p.25)

Regarding to the reasons and the origin of gender inequality, it can be seen that Asia would be the place where gender discrimination has seemed to be a “tradition”. According to the General office for population family planning, the idea of distinguishing men from women came from the impacts of Confucianism and the awareness of people about life. Men were thought to have a duty of continuing the ancestral line. In that society, not having a son meant to be disrespectful towards the ancestor. Going on with this wrong conception, women are more likely to lose the role in community (Nguyen n.d.)

Initially, gender inequality has effects on the scale of population. According to statistics of the General office for population family planning (Nguyen n.d.), because of the discrimination of genders, the number of new-born boys and girls is unequal. To some people, the hope to have a son loses the balance between two genders. Unfortunately, this situation has occurred for such a long time, so the impacts of it in the population are rather huge. As report of Ministry of public health, it is estimated that, despite the attempt to reduce the fluctuation between the birth of boys and girls, in 2020 there will be 4.3 million men more than women. Minister of ministry of public health statement (cited in Phuong 2012), said that if this trend still keeps on going, it will lead to quite a few consequences in security and the order of society before marriage age of children because there will lack brides resulting from out-numbered new-born boys from girls. Now we can see an obvious consequence among the Chinese. According to a Blue Paper on Society released by the China Academy of Social Science, there will run short of brides in ten years because of severe gender imbalance among young people, particularly among under 19-aged people (Tang 2010).

Secondly, the discrimination of genders leads to some problems in education. Education is an important tool, is the key to the growth of human. And no matter what gender a person is, he has right to expose to education like others. Chaudhry & Rahman (2009 p.175), reported that “there are many empirical evidences that, increase in female education improves human development outcomes such as child survival, health and schooling”. However, “lower female education had a negative impact on economic growth as it lowered the average level of human capital” (Klasen 2002, cited in Chaudhry & Rahman 2009, p.175). World Bank in 2001 stated that in almost all poor countries, there is a high trend of educational impacts of gender inequality. In poverty, girls are more likely to be influenced to approach education.

Finally, economy is the field that is consequently affected, because there is a link between education and economy. The impact of gender inequality on economy is found through the number of male and female students in primary and secondary school which is negative (Barro and Lee (1994) and Barro and Sala-i-Martin (1995), cited Stephan Klasen 1999, p.4). And they claimed that “a large gap in male and female schooling may signify backwardness and may therefore be associated with lower economic growth”( Barro and Lee (1994) and Barro and Sala-i-Martin (1995)). And let’s take China- a country which is famous for strong gender imbalance all over the world- as an example of modeling the impact of gender imbalances on economic performance (Golley &Tyers 2012). As mentioned earlier, China is facing a lack of brides 10 years to go and this trend leads to the problems of women purchasing crime. Especially men in poor provinces now are exposing to “marriage market” and this situation makes “the black market of “selling wife”” on the rise, said the deputy director of the China Population Association- Tian Xueyuan (cited Tang 2010). Another economic impact of gender discrimination is unequal wages among male and female. According to Yang Juhua, a professor with Renmin University, the wages of women is much lower than men’s despite the same level of position (cited Tang 2010). Tang also mentioned the chances to get a job of women are smaller and there is more likelihood of being refused on applying for jobs.

How to solve this problem?

Ninety-three years ago, people in some places in the world first officially celebrated the International women’s day. In ninety three years, there have been a lot of changes made in terms of changing attitudes of people about the inequality of genders. Nowadays we are living in a developed world which is contributed by both men and female so why female have to suffer such that inequality which they don’t deserve to?

Generally speaking, this kind of inequality has existed for a long time and in every area of the world, no matter where it is (Chang n.d.). Now it’s time for the world together make this out-of-date conception fade away. To some extent, the Nobel Committee stated that we cannot reach democracy and peace unless we wouldn’t give equal rights and chances for women have. For the sake of making economic recovery, U.S. Secretary of State Hillary Clinton claimed that promoting women to participate in economy and increasing their productivity is the key to economic growth because it will create an effect on “the competitiveness and growth of our economies.” (cited Sharma & Keefe 2011).

In the relationship between economy and education, people cannot underestimate the importance of education. To flourish the economy system, people have to make an effort on schooling. Regarding to the solutions to this, setting up gender-sensitive schools is a crucial step in making a nice environment for learning and teaching. Helping female feel more confident in studying, improving a gender-sensitive curriculum which reflects national policy on gender equality to instruct is also necessary (Clarke 2005, p.11)

From all the discussing above, gender inequality is obviously an urgent problem in the world. Despite the fact that its volume much decreases, it still exists and makes a lot of people suffer its consequences every day. And there are many reasons leading to gender discrimination which cannot be solved easily. However, with education and progressive thoughts of people, there are also reasons to trust in the future of gender inequality being stopped. Then, hopefully, people can live in fairness no matter what gender they are.

Gender inequality, or in other words, gender discrimination refers to unfair rights between male and female based on different gender roles which leads to unequal treatment in life. The term gender inequality has been widely known in human history but not until the beginning the 20th century has the transformation of gender relations...

In order to find out how helpful the PCS Model is in relation to internalised gender oppression, I must first gain insight and try to understand the structure of Neil Thompson’s theoretical mode...

This paper demonstrates a societal status of women and their pondering image in a perspective of social, political and economic contexts in Pakistan. The explicit spectrum of gender in different acade...

The principal aim for the research study is to discuss the Equal employment opportunity commission (EEOC), its history, background data, the implications of equal employment...