Relative poverty is associated to those who are not able to afford an “ordinary living pattern” within their area which is why they are socially excluded. This includes not being able to participate in normal activities, whether economic, social, cultural, or political, as well as not being able to access services (CGP, 2016, p. 80-81). While absolute poverty, according to United Nations (1995), is being able to afford the basic needs of life such as food, clothing, shelter and so on. According to BBC (2017), absolute poverty in the United Kingdom has improved over comparable periods of time since the 1960s. Meanwhile, relative poverty has remained more or less the same as inequality remained unchanged. This measure of poverty can be a strength as looking at these measures gives the society a picture of what is going on. Although, the weakness is that the list of necessity changes over time (Mack and Lansley, 1985).

Some social groups are more likely to be poor than others. The government measure of poverty in the UK is an income of less than 60% of the median income (McGuinness, 2018). (The median income is the middle income. Half the population earn more than the median, half of them earn less.) It is a measure of relative poverty as it changes in line with the incomes of the rest of the population (CGP, 2016, p. 82). Social class affects wealth, income and poverty. The factors determining social class, such as the type of job are closely linked to economic well-being. People in unskilled, manual jobs tend to have lower wages and less job security than those higher up the socio-economic scale. Functionalists agrees that unequal distribution of wealth is good for the society (Shildrick and Rucell, 2015). According to them, some people are richer or poorer than others because society functions that way. They suggest that there needs to be a way of allocating people to suitable roles and jobs. The top jobs need to be rewarded more highly than others to motivate intelligent people to train for them. Ethnicity also seem to affect income, said Purohit (2017). According to him, census data showed that White British and Indian people are more likely to be in paid work than Bangladeshi, Pakistani and Black African people. Also, the difference for women is much greater due to cultural reasons such as women in some cultures are traditionally expected to stay at home to look after the children. This is why Marxist explanations of poverty have been criticised because they claim that capitalism is the reason for inequalities in wealth and income (CGP, 2016, p. 85). According to the Marxists, if wealth was distributed equally, there would not be any profit for the capitalists. In addition to that, exploitation is an essential part of capitalism, and inequalities in wealth and income are central part of that exploitation. Marxists ignores the effects of gender and ethnicity on poverty. It does not explain why women are more likely to be poorer than men, or why Bangladeshi households are more likely to be poor than other households.

Women are slightly more likely to be poor than men (CGP, 2016, p. 85). This difference is partly because women are more likely to be lone-parents than men, and female lone-parents tend to be from less affluent backgrounds (Child Poverty Action Group, 2018). Working mothers are more likely to be in part-time jobs that fit in with childcare, but that pay less. Also, single female pensioners are more likely to have low incomes than single male pensioners (Joseph Rowntree Foundation, 2017). The Feminist perspective suggests that things are worse for women. However, they say that the real situation is far more unequal as a lot of poverty researches focus on the formal economy and work, the experiences of women’s domestic lives are often ignored.

Age can also be a factor that determines social class. Children in the UK are statistically more likely to live in low-income households than the population as a whole. DWP (2015) data has shown that unless as adult in their family works full time, there is a high chance that the child will be in relative poverty (McGuinness, 2018). According to McGuinness, pensioners are now less likely to live in poverty than non-pensioners, even though the opposite was true until about 15 years ago. This could be due to more generous benefits for pensioners. Not to mention, disabled adults are twice as likely as non-disabled adults to live in low-income households. This is because disabled adults are more likely to be low paid or not in work. They often either could not work or face discrimination in the job market. They may also have poorer access to education, making them less qualified on average than other people (CGP, 2016, p. 83). Going back to the sociological criticism of Charles Murray, it ignores factors like disability which individuals are not able to control (CGP, 2016, p. 86).

Welfare is all the institutions that look after people whether they are state-provided or not. There are four sectors that provide welfare, these are the Private Sector which services are run by companies for profit, Voluntary Sector which services ae provided by charity, Informal Sector which means services and help are provided by friends and family, and Public or State Welfare (The British Welfare State) which provides services that are funded, regulated and run by the state (BBC, 2019). These are the National Health Service (1948), the free education system (1944), and the benefits system. The idea was that people in work would pay into a national insurance scheme which would pay for the Welfare State making it free at the point when a person actually needs it.

Benefits can be Universal or Means-Tested. Universal benefits are paid to everyone regardless of wealth and Means-tested benefits are targeted at those most in need, such as those on lower incomes. Below shows the advantages and disadvantages of these benefits (CGP, 2016, p.87).

The New Right believes in the Reduction of the Welfare State. They think that a generous welfare state actually makes people poorer (CGP, 2016, p.88). The British New Right thinker, Marsland (1989) thinks that all universal benefits should be abolished because they encourage dependency. He says that means-tested benefits should be used to support those in the most desperate need for the shortest possible time. He argues that this will encourage people to “stand on their own feet.” But some criticisms on this suggests that means-testing benefits cause a ‘trap’- getting a low-paid job may mean you lose the benefit and are no better off. Also, poor people may end up with second-class services if other people are expected to use private providers (Sevinc, 2018).

The National Minimum Wage is to ensure every employer pays more than benefit levels. However, others would argue that the Minimum Wage rates are still too low and do not provide a ‘living wage’ in certain areas of high housing costs such as London. And the problem is that it may cause unemployment as firms may not be able to afford the workers. If it does cause unemployment, poverty could worsen (Farthing, 2016).

Although, the forecast for National Minimum Wage by 2020 could reach £9.00 or more. The Resolution Foundation have suggested by 2020 the minimum wage could affect one in nine workers (Schraer, 2016).

The History of Minimum Wage 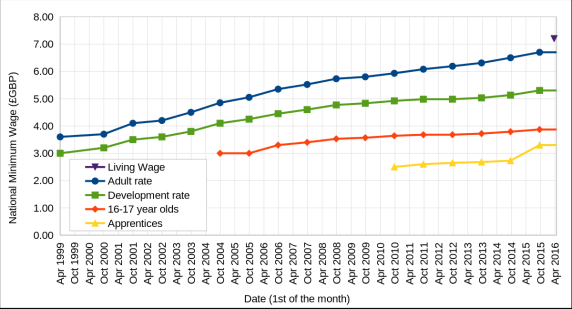 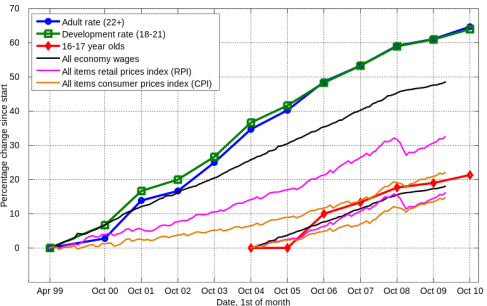 Since October 2010, the National Minimum Wage has increased from £5.93 to £7.20, whilst average wages have stagnated.

The National minimum wage has risen faster than average wages, especially since 2007. 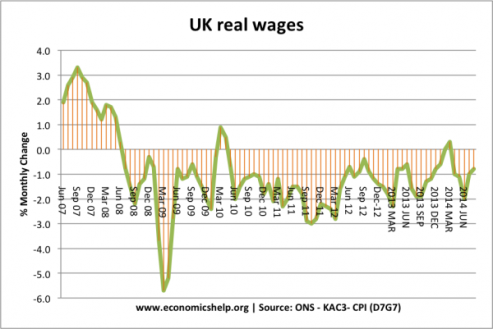 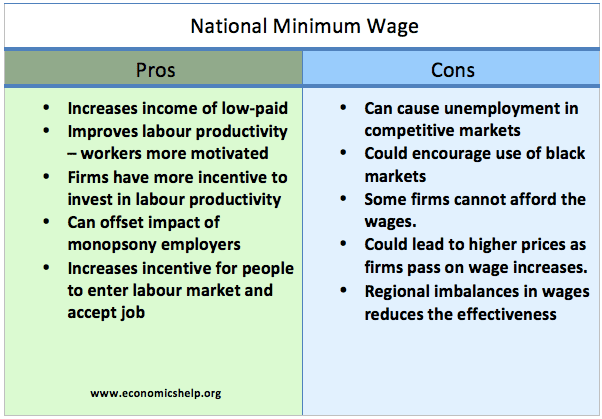 There are some benefits of the National Minimum Wage. One of this is that it reduces poverty. It increases the wages of the lowest paid. These workers will have increased income and will reduce relative poverty. It also increases the incentives to accept a job.  With a minimum wage, there is a bigger difference between the level of benefits and the income from employment. And it also increases investments. Firms will have an increased incentive to invest and increase labour productivity because labour would cost more (Manning, 2018).