Congress declared, “The illegal importation, manufacture, distribution, and possession and improper use of controlled substances [CSs] have a substantial and detrimental effect on the health and general welfare of the American people” (21 U.S.C § 801, 1970). CS abuse from 1999 to 2008 caused an increase of 300% of fatal opioid overdoses and contributed to over $72 billion annually that health insurers paid in health care expenses for opioid use (Larrat et al., 2014). The CDC attributes 78.1% of the 64,000 fatal overdoses in 2016 to opioid drugs obtained by CS diversion (CSD) and community sales (Kristof, 2018).  Sadly, approximately 97.5 million people aged 12 and older in 2015 (36.4 percent of the American population) used CSs (Drug Diversion, 2017).  Immediate action is needed to deter CSD and lower opioid abuse.

In 1961, the United States (US) joined the Single Convention on Narcotic Drugs to institute mandates with regard to trafficking of CSs (21 U.S.C § 801, 1970). When President Nixon enacted the Controlled Substance Act (CSA) Title II of the Comprehensive Drug Abuse Prevention and Control Act of 1970, the Drug Enforcement Agency (DEA), the Department of Health and Human Services (HHS) and the Food and Drug Administration (FDA) initiated a “war on drugs” (Anderson 2012; Larrat et al., 2014). Almost fifty years later, the US suffers the highest drug use in history. One major contributing factor of this crisis is CSD in medical systems. Siegel (2019) stated that according to Title 21 of the US Code: CSs are “drugs classified as Schedule I through Schedule V by the FDA or applicable state law,” drug diversion is the “transfer of drugs from lawful to unlawful channels, such as a theft from hospital supply;” and theft is “when a person knowingly exerts unauthorized control over property and either (1) intends to deprive the owner of the property or (2) willingly and knowingly uses, conceals, or abandons the property in a way that actually deprives or will deprive the owner of the property.”

Ten to fifteen percent of clinical workers in the US healthcare system will divert CSs in their careers, approximately 90% of which go undetected (American Society of Health-System Pharmacists [ASHP], 2017; Kristof, 2018; & Siegel, 2019).  Carpenter (2014) cited research from 2001 identifying 10% of nurses “may be impaired or in recovery from alcohol or drug addiction.” CSD from hospitals increases disease outbreaks, drug-related hospitalizations, substance abuse admissions, overdose-related deaths and hospital risk (Kristof, 2018). Administrators, pharmaceutical management, protective services, nurse leadership and all hospital staff can collaborate to reverse this crisis by increasing awareness and prevention efforts, decreasing opportunities for diversion, enforcing corrective action, and assistance with prosecution of offenders.

In 2010, excessive use of hydrocodone with acetaminophen for pain management and abuse were a result of 131.2 million prescriptions written (Carpenter, 2014).  Patient harm, addicted health care workers (HCWs), HCWs’ dangerous activities around to other HCWs, loss of revenue and civil liability across health systems, as well as loss of life are all harmful results of CSD (Berge et al., 2012). “Hospitals bear the cost of diverted drugs, internal investigations and follow-up care for affected persons, and can be fined in excess of $4 million for inadequate safeguards” (Fan et al, 2019). The University of Michigan violation of the CSA (lack of DEA registrations and improper maintenance of records) resulted in a $4.3 million settlement, the largest CSA settlement of a hospital in history (Siegel, 2019).

Workplace overdoses from CSD rising at an almost unprecedented rate of more than 25% opioid-related mortality annually. Figures 2 and 3 shows the rise in fatal overdoses in the workplace increased 32% from 2015 to 2016 nationwide (Durden, 2017). Figure 4shows West Virginia, Ohio, Kentucky and Pennsylvania exceeding the national average (Durden, 2017). Figure 5 the demographic differences of opioid use in Ohio, most noticeably that males aged 25-54 experience the highest rates of addition and contributed to the most number of opioid-related overdose deaths in Ohio in 2015 (Durden, 2017).

To deter workers from consumption of CSs, health systems and other employers conduct drug screening during pre-employment and/or randomly during employment. Mieczkowski (1992) compared urine and hair mediums to determine the longevity of the presence of toxic substances. While CSs will generally remain in urine specimens for 3-5 days, the cortex of hair follicles will typically hold CSs for up to three months (figures 6 and 7) (Mieczkowski, 1992; Cuypers & Flanagan, 2018). “Hair analysis can be used for the determination of drug use months after drug consumption,” but is more expensive to process than urine or blood testing (Cuypers & Flanagan, 2018). Despite longer lasting traces of toxicity in hair, most employers still use urine and blood screening.

The Patient Protection and Affordable Care Act (ACA) requires health insurance providers to cover addiction treatment to increase accessible care for Americans. This innovative legislation helped states with expanded Medicaid to lower uninsured hospitalizations from CS abuse and mental health disorders by 15% between 2013 and 2015 (Kristof, 2018).  Similar legislation has been enacted in some states, but nationwide policy regarding CSD is still limited.

It is necessary for healthcare administrators to cooperate with state and national agencies to lower CSD, protect healthcare workers and their patients, reduce economic waste, and defend health system integrity. Accomplishing this task will require PMPs to include:

HCWs who are accountable for tampering with medications, theft, use and sale of CSs will perceive those negative actions to be more risky. By engaging HCWs in the PMP process, healthcare systems, state health departments and federal agencies can compile metrics to analyze, predict and prevent future CSDs.

Larrat et al. (2014) suggest, “The consequences of this diversion include adverse societal, clinical and economic impacts.” Too many lives being lost, resources stolen from hospitals and money being spent on CDS to survive the continued growth of the opioid crisis in the US. Costs of prevention and taking regulatory actions will be less than the billions of dollars spent/wasted from CSD and the incalculable value of lives lost. Legislative action must be taken to support the mandatory system-wide change that is needed to provide justification for action and funding. Figure 8. Number and type of PDMP agencies in the US (Prescription Drug Monitoring Programs, 2017) 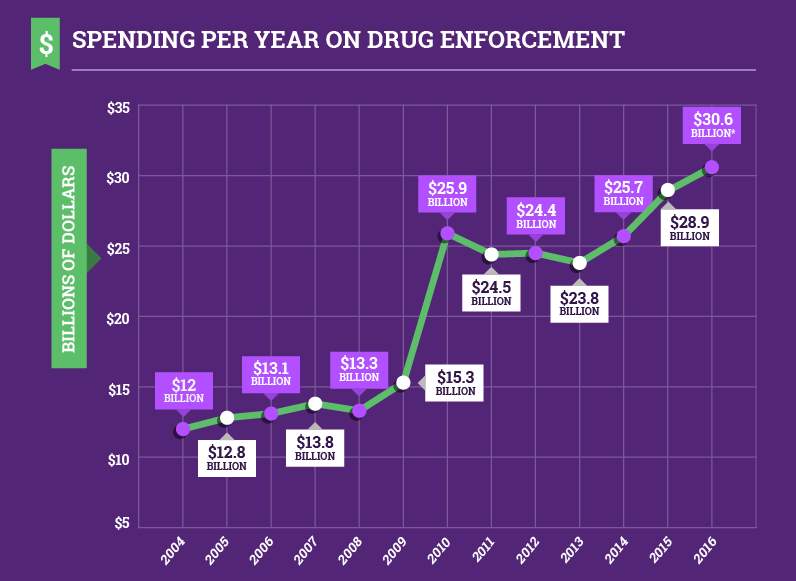